One of the pleasures of working at the National Museum of American History is discovering the connections between the collections and research. A good example is my recent experience with Ajeeb, the famous chess-checker playing automaton. I learned about this amazing automaton while processing the William L. Bird Holidays on Display Collection. I was immediately smitten with Ajeeb, a 10-foot high, wax and papier-mâché mechanical wonder that won most every game of chess and checkers it played.

Ajeeb, also known as “The Egyptian,” was conceived of by Charles Edward Hooper of England in 1867. First displayed at the Crystal Palace in London, Ajeeb was brought to the United States in 1886 and featured at the Eden Museé, a New York City amusement place that opened in March 1884. Ajeeb is a descendant of earlier chess-checker playing automatons. In 1769, Wolfgang von Kempelen of Austria introduced the Mechanical Turk, which served as the inspiration for Ajeeb. Other automatons with similar abilities and names like Mephisto, Hajeb, and As-Rah also appeared. While the Ajeeb enjoyed a long stint at the Eden Museé (almost 40 years), he was not the only Ajeeb on the circuit. Martinka & Company of New York, America’s oldest magic shop, sold a chess-playing automaton in its 1898 and 1906 catalogs. Although we don’t know the price or sales figures, the idea that individual consumers could purchase their own Ajeeb is delightful. 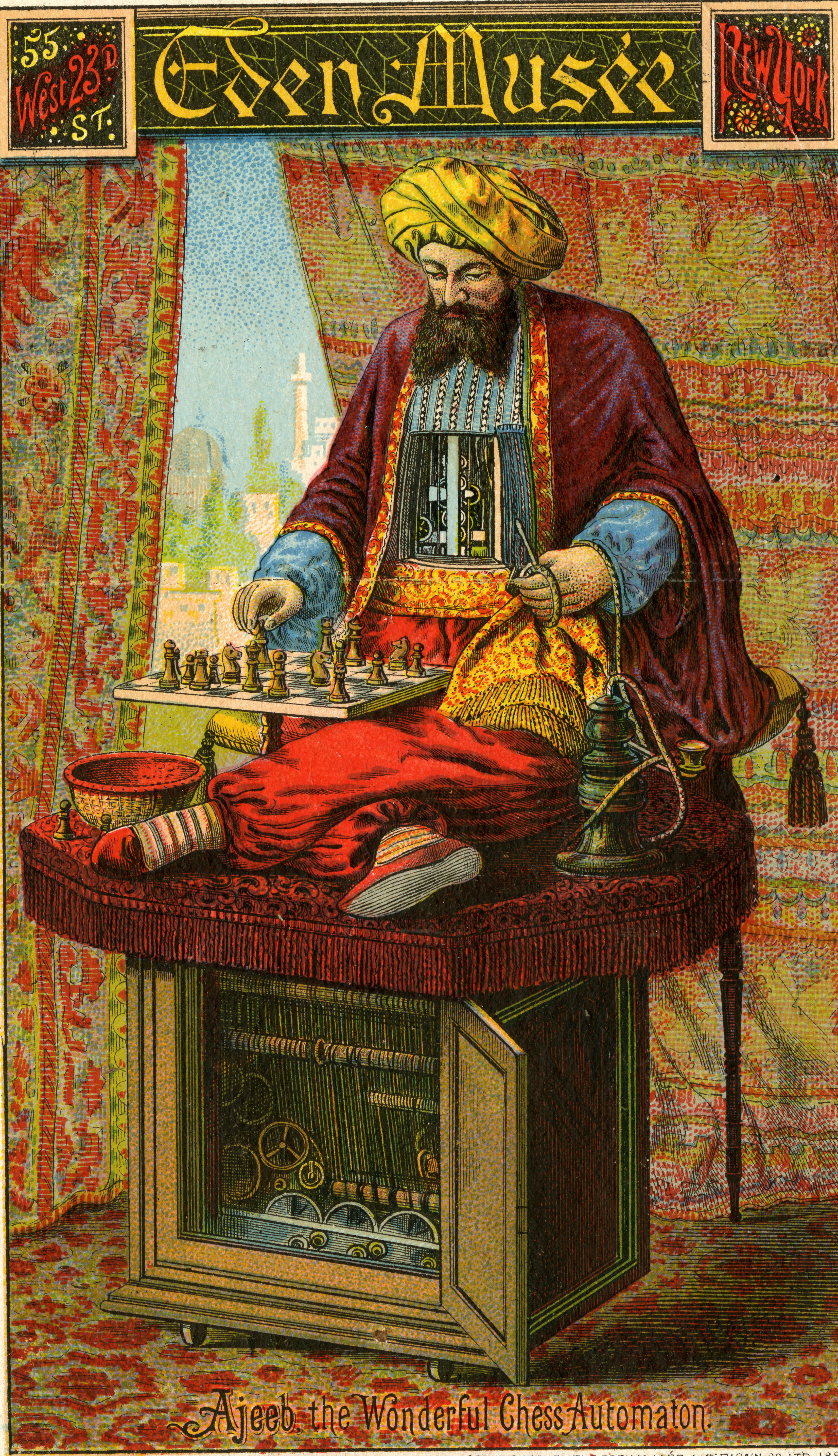 Ajeeb’s chess and checker playing prowess was greatly doubted and debated. Many believed Ajeeb was operated from an adjacent room; others thought that he had a magic brain. Indeed, inside Ajeeb’s base, cleverly concealed by panels displaying complex machinery, were hidden operators maneuvering the arms, and carefully choreographing every move. The greatest wonder ever invented was an elaborate hoax—a great illusion that entertained crowds all over the world.

Months after discovering Ajeeb in the collections I was talking with a colleague who was researching the early history of mathematical games played on computers. I mentioned my discovery and she shared my enthusiasm for this mysterious automaton. Several months later I found Ajeeb elsewhere in our collections. While examining a box about vending machines in the Warshaw Collection of Business Americana I found Ajeeb on a trade card from the Eden Museé. To learn more about our collections, visit the Archives Center website.