On Halloween day, a gorgeous 40-foot-tall black specter mysteriously rematerialized at its old haunts on the west lawn of the National Museum of American History. In a simple rededication ceremony, Alexander Calder's Gwenfritz was twice blessed, first by the Smithsonian American Art Museum, to whose collections it belongs, and once again by the National Museum of American History, whose land it once again graces in its original location.

It was a splendid reminder of Smithsonian inter-museum collaboration. But in a way, this split institutional responsibility obscures how people actually understood the relationship among art, technology, and our nation's history when the building opened to the public 50 years ago under the name of the Museum of History and Technology. The Museum's origins go back to the rise of the modern movement at the turn of the last century, when art, technology, and design found new synergy.

The Morris and Gwendolyn Cafritz Foundation provided the funds for the commissioning and setting of the Calder stabile at the Museum. In his rededication remarks, Calvin Cafritz, president of the Foundation, revealed that his mother Gwendolyn, after whom Gwenfritz is named, first became hooked on Calder after encountering his work in the American pavilion of the 1958 Brussels World's Fair.

Gwenfritz was originally installed at its west lawn location in 1969, five years after the Museum opened its doors to the public, but we know it was part of the original plan. Architect Walker Cain of McKim, Mead, and White was employed to design the setting for this magnificent sculpture. From the start of his commission, Cain had the difficult task of designing a modernist building that fit in with the classical colonnaded structures surrounding it on the Mall, especially those across Constitution Avenue on the Federal Triangle. His solution was, in his words, to produce "a building which is classical in definition, and the detailing is modern." Gwenfritz was key to his architectural strategy. Calder's abstract piece, revered as a modernist icon, was one of the first abstract public sculptures in Washington.

The Museum was founded as a monument to modernity based on reigning ideals of technological progress. Gwenfritz, the creation of a mechanical engineer turned artist, belonged to this building as much as the John Bull locomotive on the Museum's first floor. In fact, the whole building, inside and out, was conceived as a modernist project, an integrated work of art.

Early renderings show abstract sculptures evocative of scientific instruments surrounding it on its terrace. Most were omitted from the final plan because of budget cutbacks, but, fortunately,Gwenfritz remained, along with Jose de Rivera's Infinity at the Museum's Mall entrance, which Walker Cain interpreted as an abstract orrery—a mechanical model of the solar system—symbolizing the technical and scientific ideals of the age.

At the rededication, we heard about Calder's training as a mechanical engineer at Stevens Institute of Technology, his connections with abstract artists in Paris, and Einstein's interest in his art. Calder once opined: "How does art come into being? Out of volumes, motion, space carved out within the surrounding space ... Out of vectors ... motion, velocity, acceleration, ... momentum ... Thus [the elements of art] reveal not only isolated moments, but a physical law [relating] the elements of life."(Quotation from Dr. John H. Lienhard's The Engines of Our Ingenuity.)

Now returned to its original setting, Gwenfritz's black planes carve out space, time, and motion against the backdrop of the Museum's façade of cool Indiana marble. Born of Mid-Century Modernism, it again speaks to the present but also to a future where art, science, technology, and American history coalesce into a single creative whole.

This post first appeared on O Say Can You See?, the National Museum of American History's blog. 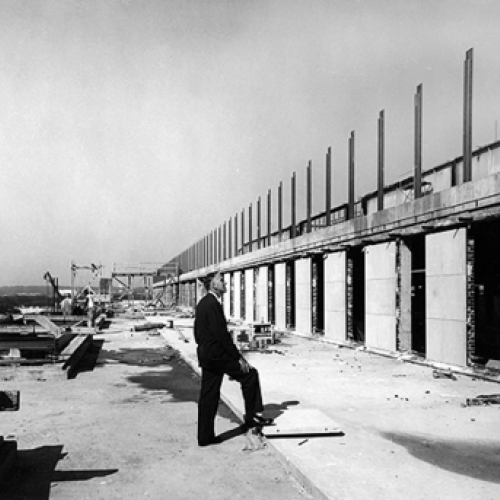 50 Years Ago Today: Opening a “Palace of Progress”

The Museum of History and Technology (the previous name of the National Museum of American History) was dedicated 50 years ago, opening to the public on the following day, January 23, 1964. Director Art Molella reflects on the fascination with the future and sense of modernism that shaped the Museum’s outlook and even our building. 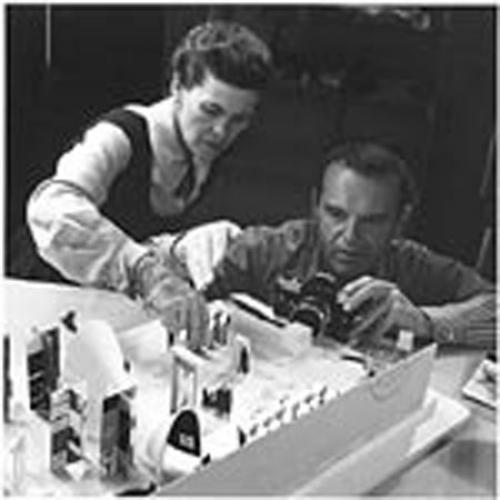 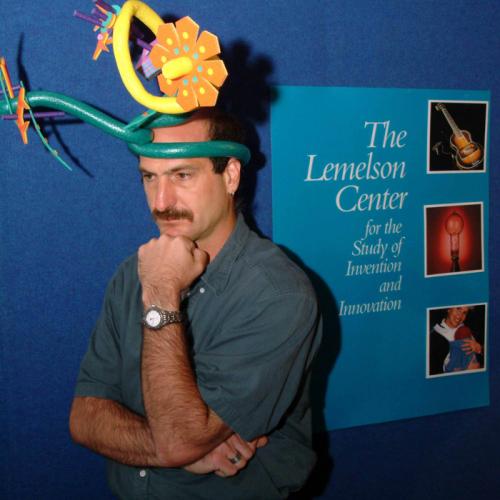 Playing with objects and ideas—bringing them together and setting them in motion—is the work of kinetic sculptor and inventor Arthur Ganson.