A Basement Workshop . . . and So Much More

Chuck Popenoe, inventor of the SmartBolt, gave us a tour of his special space of invention.

It sounds like a cliché—the lone inventor tinkering in his basement workshop. Perhaps you know someone who putters in a basement shop or garage, totally immersed in woodworking, car repair, or other hobbies. Maybe he or she has even invented a thing or two. But we are more likely to imagine today’s inventors toiling away in corporate or university labs, not basements. Do independent inventors still exist? The Lemelson Center recently found one such person working in his basement in an unassuming home in Bethesda, Maryland. He is Chuck Popenoe, inventor of the SmartBolt and other deceptively simple devices.

Chuck has been inventing in this workshop for more than forty years. But he has had some special place for his creativity and inventions throughout his life. As a child he had a chemistry lab in the basement of his family home. His mother, a chemistry teacher, would bring home chemicals and lab apparatus; the local pharmacist, whom Chuck worked for as a gofer, also helped to supply the lab. With his brother, Chuck experimented with explosive chemicals like nitroglycerin, and even tried to invent synthetic rubber for the war effort during World War II (both attempts were unsuccessful). As a teenager, he moved on to electronics.

Chuck earned a degree in engineering and spent most of his career at the National Bureau of Standards (now the National Institute of Standards and Technology—NIST), devoting much of his time to designing automated equipment for the lab’s scientists. All the while, he was inventing in his basement in his free time. The inspiration for many of Chuck’s ideas and inventions came from his hobbies: a regulator for scuba diving, a tachometer for his ultralight airplane, an autopilot for sailing. He records his ideas in a lab notebook and sometimes builds prototypes. He may use the device himself in pursuit of one of his hobbies. For the most part, though, his inventions remain unpatented.

His most successful invention, which Chuck has patented, is the SmartBolt—a bolt which points out when the proper tension is achieved by providing a color-change indicator on the bolt head. The indicator is bright red when loose, and gradually darkens to black as the bolt is tightened. The indicator returns to red if the bolt once again becomes loose. Thus proper tension can be verified simply by visual inspection. In critical situations, loose bolts can be easily identified and tightened, averting catastrophic accidents. SmartBolts are manufactured by Chuck’s company Stress Indicators, and they are all around us. His many customers include General Electric, General Motors, Intel, John Deere, the National Weather Service, and the United States Army.

This deceptively simple yet ubiquitous device came out of a basement workshop in a residential neighborhood. Chuck is a nimble-minded inventor, able to apply his creativity across a wide range of interests. He designed his space to inspire and support his work; it’s filled with a lifetime of tools, inventions, and hobbies. Renovated just in time for his retirement from NIST, the workshop is now where he spends his days—when he’s not flying, diving, or sailing to exotic destinations.

Entering Chuck’s basement from the driveway, the visitor encounters the unexpected—an airplane parked in the garage! The workspace was designed specifically to accommodate the construction and storage of his ultralight aircraft (he has built four). With wings folded, they can simply be rolled out of the garage and onto a trailer to be transported to a local airfield. From the garage, one moves into the lab, a clean room with plenty of natural light; it contains testing equipment, assembly equipment (for specialized bolts), microscopes, and chemicals. This is also where Chuck has his business office and … his fiddle and ukulele. The last room, where the dirty work of inventing is accomplished, is filled from floor to ceiling with machine tools, hand-tools, materials, and supplies. Inventions—from a doorknob combination lock to a handheld electric knife with continuous rotating blade—are tucked away around the room. And it’s the spot where Chuck brews his beer.

Chuck’s basement workshop inspires us to think about the relationship between inventors and the places where inventive creativity happens. The Lemelson Center tries to better understand these creative spaces. How do they support inventors’ work, and how can they inspire each of us to establish our own inventive spaces? 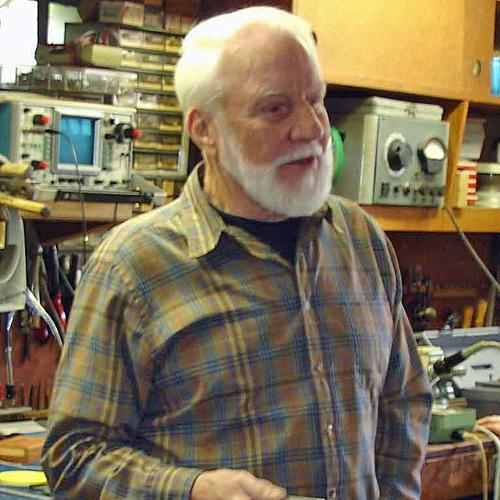 An exploration of best practices for documenting the labs, workshops, and creative spaces of America’s inventors