Battling Under the River

Looking back at the tunneling boom of the early 1900s—and the "sandhogs" who made it happen.

Drill, blast, shovel. Drill, blast, shovel. Repeat. This was the rhythm of work that accompanied the construction of the North River Tunnels below the Hudson River between Weehawken, New Jersey and Pennsylvania Station in New York City from 1904 to 1908. After their completion, this pair of tunnels carried freight traffic for the Pennsylvania Railroad, which financed the tunnel construction.  By 1910, the tunnels were carrying passenger train traffic. Today, the pair of tunnels continue to carry passenger traffic for New Jersey Transit and Amtrak.

During the early 1900s, there was a tunneling boom in New York City, and James Forgie, Chief Assistant Engineer of the North River Tunnels, had a front row seat and role. Reflecting on his work, Forgie said, “In order to get the best possible talent no pains had been spared in searching for men who were best qualified by training and experience to look after each respective portion” (History of Engineering). Forgie’s reference is, of course, to the engineering staff assembled for the project under the leadership of Chief Engineer Charles M. Jacobs.  Indeed, these notable civil engineers plotted and planned an impressive subaqueous engineering feat.  Soft ground tunneling was, and still is, difficult engineering work. Forgie, a specialist in this work, noted in 1906, “Engineers who grappled with the Hudson River tunnels had the added complication that the soft, flowing mud to be penetrated furnished no secure foundation for the tunnel structure.”  The key to the work, according to Forgie, were the shields—temporary structures used during the excavation process. 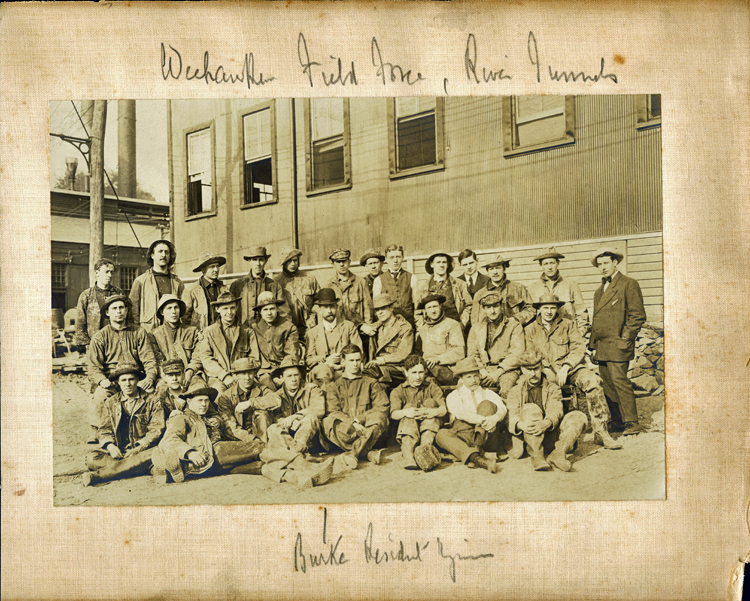 But underground, implementing the design and civil engineering feat, were the sandhogs.  First known as “compressed air workers,” meaning those who labored under increased atmospheric pressure, sandhogs are construction workers who work underground or underwater, drilling, blasting, and excavating to build tunnels, roads, mines, or bridge foundations known as caissons. At the turn of the twentieth century, tunnels were primarily excavated by hand and many laborers suffered from the “bends” or caisson disease (decompression sickness) in which nitrogen dissolves in the blood and tissues in high pressure situations and forms bubbles as the pressure decreases. Caisson disease meant joint pains, vertigo, chest pains, numbness, and neurologic symptoms. Without intervention, caisson disease could lead to cardiovascular collapse and death.

In 1872, Irish immigrant laborers went on strike during the construction of the foundations for the Brooklyn Bridge. They were striking for better wages and working conditions. Many laborers working on the Brooklyn Bridge succumbed to caisson disease. By 1906, conditions underground had improved and the Compressed Air Workers Union (formed in 1892) helped coordinate some of those efforts.  In his 1906 report about the tunnel design shields and plant, Forgie wrote that “the project specifications were carefully drawn to obtain good atmospheric conditions in the compressed air tunnels . . . together with a supply of hot coffee on hand at all times.” Unfortunately, that ready supply of coffee didn’t help the “bends.” 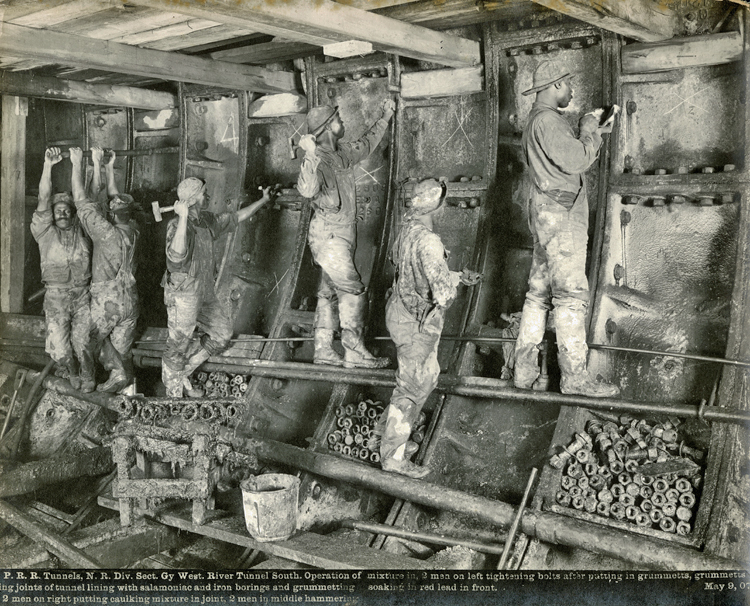 Images from the James Forgie Papers, taken between 1904 and 1908, provide a glimpse into the world of a sandhog, many of whom were African American or immigrants, especially Irish. Photography of the North River Tunnels and other engineering projects that Forgie worked on are well documented through black-and-white construction photographs. Many of the photographs are numbered and captioned, providing detailed information about processes, methods, and locations, but rarely people’s identities. Construction photographs, often timestamped and sequential, chronicle every step of a project. The photographs, along with progress diagrams, were often later used in reports. This type of construction photography would dominate the twentieth century; Forgie’s collection of photographs is only one of presumably multiple sets that were produced for the principal engineers and financiers of large scale civil engineering projects. 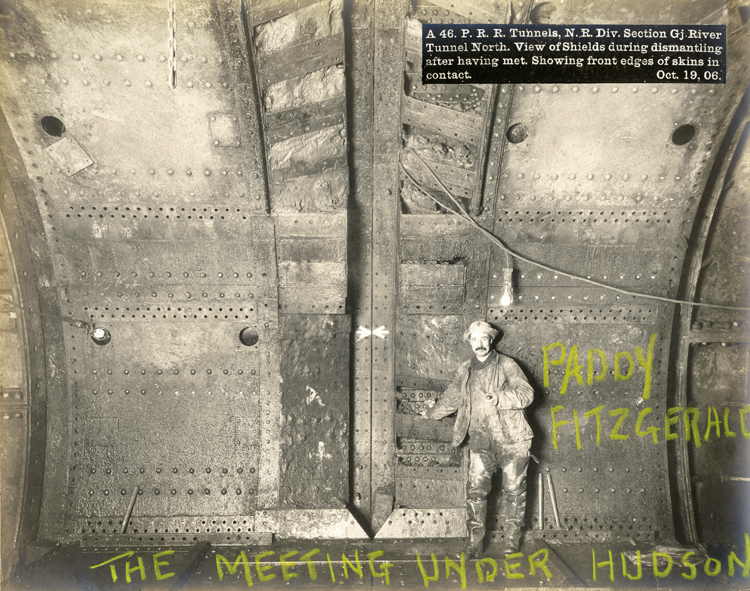 Patrick “Paddy” Fitzgerald during the dismantling of the shields after the two halves of the tunnel met under the Hudson River, October 19, 1906, AC0986-0000027.  James Forgie Papers, Archives Center, National Museum of American History

Patrick “Paddy” Fitzgerald, in his oil skin suit and felt hat, pants tucked into his rubber boots, and pipe in hand, stared back at me in this 1906 photograph. The name stuck. I had read about Fitzgerald elsewhere among Forgie’s voluminous papers and learned he was the Assistant Superintendent for the O’Rourke Construction Company, the company that built the tunnels. I imagined Fitzgerald leading his men down the shaft daily to battle Mother Earth. On September 13, 1906, when the north and south tubes from New York and New Jersey successfully met up, Fitzgerald declared, “Three cheers for the sandhogs, the men that did the job.”

Penned by an underground poet, presumably an Irishman, this poem, “The Sunless City,” captures a whimsical side of sandhog work, and a nod to his Irish countrymen:

There’s a city that lies in the Kingdom of Rock.
In the beautiful land of the mud;
It’s peopled by folks from all over the world,
But mostly the Isle of Spud.
There’s aerial bridges of timber and steel,
And beautiful streets made of lime;
A gardenless Eden that has no police
'Tis there that the sun don’t shine.

Battling Mother Earth wasn’t easy, so the next time you find yourself navigating New York or New Jersey underground,  you can thank a sandhog, the real heroes of implementing nineteenth century tunneling technology. To learn more about civil engineering, visit the Archives Center.

Forgie, James. “The Construction of the Pennsylvania R.R. Tunnels under the Hudson River at New York City,” Engineering News, December 13, 1906.

“Tunnel Workers Victims of Poetry Habit: Wit and Wisdom in Rhyme as It Is Produced by the Human Moles Who Are Burrowing Under the City,” New York Times, April 7, 1907. 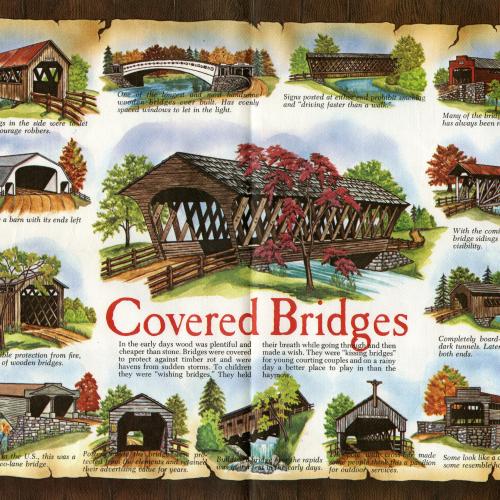 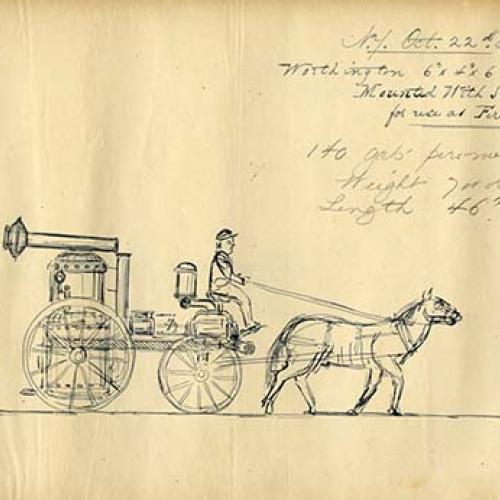 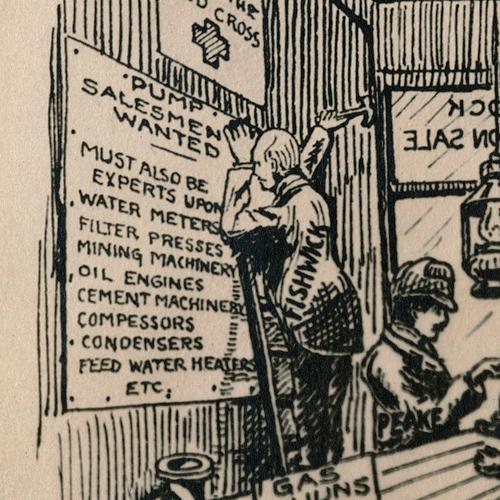