Feeling a bit like the “Six Million Dollar Man” after cervical surgery . . .

As I continue to recover from my recent anterior cervical discectomy and fusion (ACDF) surgery, I can’t help but feel a bit like the “Six Million Dollar Man.” I can almost hear the bionic sound effect that was the staple of Lee Major’s TV character, Steve Austin (I’m leaking the proximity of my age here). The procedure is typically performed to treat nerve root and spinal cord compression as a result of spinal stenosis, degenerative disc disease, or, as in my case, a herniated disc. The surgeon accesses the spine with a small incision in the crease of the neck and after moving neck muscles and the esophagus aside, the bedeviled disc is removed, replaced, and the vertebrae stabilized with a titanium plate and four screws. It is the titanium plate that makes me feel somewhat bionic and the use of titanium specifically that makes the surgery so interesting to me. For several decades, titanium has been recognized as an element that can bond with bone and integrate with it. It is the use of titanium in the surgery that allows the fusion of the reconstructed vertebrae to remain secure. 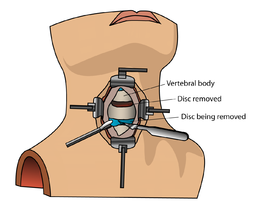 The hope and expectation of surgeons who perform this procedure is that the patient will end up with a much more stable spinal structure than before. In the opening sequence of the “Six Million Dollar Man,” a voice describes the star, “Steve Austin, astronaut. A man barely alive. Gentlemen, we can rebuild him. We have the technology.” How fitting, right?

When my surgeon initially described the entire procedure and mentioned the plate, I remember wondering how I would ever get through a TSA checkpoint without being searched extensively and repeatedly. My wife, who works for the Department of Homeland Security and was seated next to me, immediately began shaking her head in pity. But my doctor quickly assured me that the plate was much too small to cause me any such issues.

As I recall that this is the surgery that corrected WWE super star John Cena’s herniated disc and corrected quarterback Peyton Manning’s collapsed vertebrae, I can only hope that if Cena could return to wrestling and Manning could return to playing professional football, a little old man like me can eventually return to yard work with the kids. Wish me the best folks.