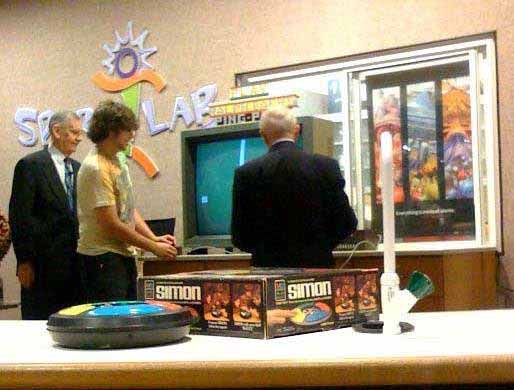 Students all over the country have just headed back to school. But what to go to school for?  Video Game Design is one of the fastest growing degree fields, even though as recently as 1996 Bachelor of Arts degree programs didn’t even exist. Two year diplomas in video game programs weren’t even established until the mid-1990s. Now, however, according to the Entertainment Software Association, “American colleges and universities will offer 343 programs in game design, development and programming, including 301 undergraduate and 42 graduate programs, during the 2011-12 academic year." The majority of schools with degree programs are located with California, but programs can be found in 45 U.S. states plus the District of Columbia.

As the popularity of video games seemed to become permanent, the demand for qualified personnel to produce them rose. It is a familiar story to the Lemelson Center. Invention leads to an industry built around that invention, and that industry leads to the establishment of programs to train and educate people to work in that industry. Industry pioneers look for people with the certain set of skills they need to reach their goals or produce their inventions. Over time a set of “standard” skills for an industry’s workers establishes itself. Around that set of skills degree programs are built. According to Rich Taylor, senior vice president for communications and industry affairs at the ESA, “with an increasing number of schools now offering graduate programs in game design and development, students have even greater access to the training they need to meet this growing demand.”

There are multiple historical comparisons, but the most apparent is the computer industry. The PC was invented during the 1970s, resulting in an industry to create computers and a need for skilled workers to create them. Within a few years colleges and universities were offering degrees in computer science.  As the industry expands, so do the areas of specialization. When studying video games, people can focus on art, programming, sound and audio, production, and writing, to name a few.

The degree—and the people who earn them—still have a long way to go to earn the same respect that Philosophy, English, Math, and History majors enjoy.  But it wasn’t that long ago that degrees in the computer industry held a similar status. Now little thought is given to people majoring in computer technology. In fact it’s looked on as being rather lucrative. Perhaps video game degrees will find themselves on a similar trajectory to respect as more and more people continue to choose video game design as a career path and its applications expand. This process—of building a new industry around a new invention—has happened throughout history and will continue. According to Taylor, “while computer and video games have been a source of entertainment for decades, our society is increasingly recognizing the broader uses of games and their positive impact. Whether it is in healthcare, education, business, or government, schools across the country see the value of games and are training their students to meet the demand.” So video game students headed off to school this fall are riding the wave of a cresting industry.