From the Collections: Who Invented the Environment?

The words "environment" and "nature" conjure images for us, whether of pristine woodlands or polluted streams. The work of artists and scientists helps shape those ideas. Objects in the Museum's collections illustrate our changing ideas about the environment, from the ideal wilderness portrayed by artists to scientists' investigations into the ecology of our planet.

The roots of today's environmentalism are found partly in 19th-century ideas about nature. As American explorers discovered the natural wonders of the young country, writers, painters, and photographers provided images of the mighty wilderness. John Wesley Powell and John Hillers were among the photographers, surveyors, and adventurers who explored the American West after the Civil War. Hillers's images, distributed through stereo views (three-dimensional images created by visually superimposing two photographs on a card) did much to romanticize the frontier.

Photographs of Niagara Falls and the Yosemite Valley helped familiarize Americans with two of their grandest landscapes. In the 19th century, awe-inspiring Niagara Falls became a popular "tourist attraction"--with all the connotations that expression carries today. In 1872 a travel writer remarked: "In no quarter of the world is the traveller fleeced as at these falls; he cannot take a single glance at any object of interest without having to pay dearly for it. Still there are few people who can afford to visit the place who do not go there; for man's impertinence and rapacity, though they poison the pleasure, cannot rob the scene of its awful sublimity." 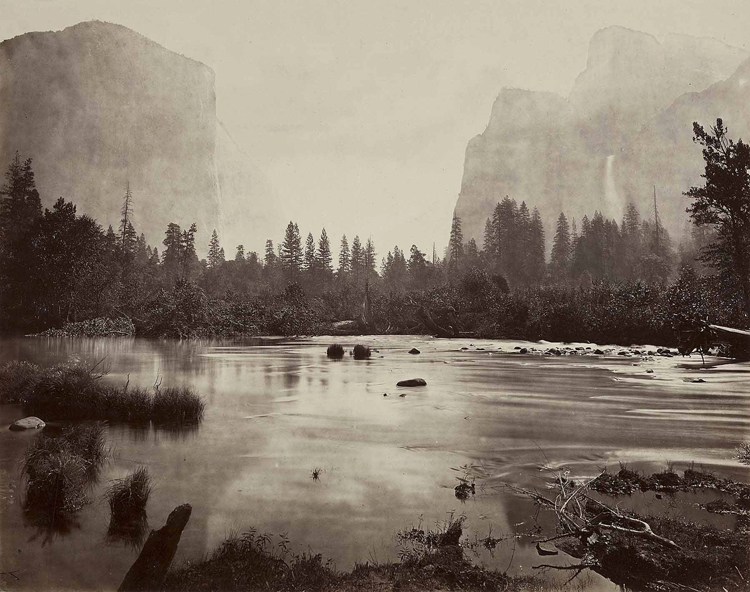 Perhaps nowhere were differing views on the environment more evident than in the Yosemite Valley, home to Native Americans, gold miners, surveyors, and naturalists like John Muir. Images of Yosemite also raised questions about the assumed objectivity of photography. Writers like Henry David Thoreau and John Muir interpreted these scenes much differently than Native Americans or entrepreneurs hoping to capitalize on natural resources. In particular, the Mariposa Grove of giant sequoias illustrated the debate between protection and exploitation of natural resources. Photographs of the trees, like those made by photographers Carleton Watkins and Eadweard Muybridge, spurred Congress in 1864 to preserve the area "for the benefit of the people, for their resort and recreation." Those who venerated the trees enough to name them saw the grove as proof of the American republic's preordained heroic destiny, while others reaped the financial benefits of tourism. Then, as now, pleas for preservation vied with demands for development.

Scientists also played a role in the public perception of "the environment." Investigating the physical characteristics of air and water with a range of instruments, they collected and interpreted data that often led to better conditions in both the workplace and the wild.

Baumgarten water current meter, 1870s. Gift of the Proprietors of the Locks and Canals, Lowell, Massachusetts.

For example, scientists analyzed samples retrieved from below the surface of rivers, lakes, and oceans to study the physical aspects of the water and the life forms it contained. The Museum's collections include instruments such as a "mud snapper" that captured bottom samples in waterways, and the Sigsbee water bottle used to collect water and plankton from specific ocean depths. Water-current meters, used mainly in rivers and canals, measured the rate of water flow, an important factor in designing and monitoring municipal water supplies, dams, bridges, and culverts, and in solving public health problems resulting from stream pollution.

Other inventions represented in the Museum's collections gathered data on air quality, providing benchmarks for meeting legislated guidelines for protecting workers' health. Anemometers measured the rate of air circulation, a critical factor for workers in mines, sewers, and other closed spaces. Dust counters deposited dust in an air sample onto a microscope slide, so particles could be counted. Ecology kits included tests for carbon and sulfur dioxides and carbon monoxide and an explanation of the causes of smog.

The collections also contain instruments used to study Earth's atmosphere. Graphic hygrometers were used to calculate the amount of moisture in the air. Barometers measured atmospheric pressure. A meteorograph in the collections was placed in an aluminum case, attached to a kite or balloon, and flown high into the atmosphere to gather information on temperature, humidity, wind currents, and atmospheric pressure.

In the 20th century, ideas about managing and protecting natural resources began to shift. Sometime around the 1940s, the term "environment" started to replace "conservation" as the term that described the management of natural resources. Similarly, "game" transformed into "wildlife." The 1960s heralded the growth of numerous grassroots preservation movements and the beginning of the "environmental era."

Today, if pins, posters, and bumper stickers are any indication, cleaning up and protecting the environment are priorities for many people. A number of factors contribute to this greater environmental awareness, but art, supported by invention and science, continues as a tool of persuasion for environmental advocacy, from the "blue marble" image of Earth from space to Al Gore's "An Inconvenient Truth." Ansel Adams, perhaps the best-known photographer of Yosemite, was also an environmental activist and Sierra Club president. In a speech in 1975, he summarized the role of the visual in effecting change:

"[P]hotography of the environment ... should move people to constructive action."