2014 marks the 150th anniversary of the granting of US patent number 43649, to John Joseph Charles Smith for a “machine for cutting printers type.” Smith’s patent drawing and model offer a view of the invention for his type-cutting machine. The machine sawed individual letters from cast-metal strips. The strips could be made by Smith’s companion invention of the same date, US patent number 43648. 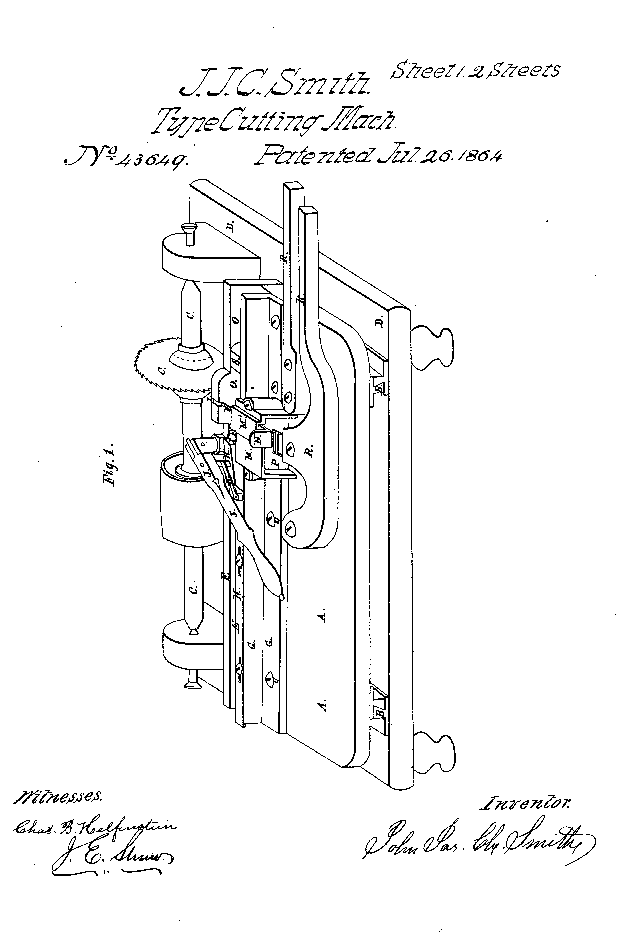 The three-dimensional patent model (measuring approximately four inches by 10 inches by 13 inches) resides in the Graphic Arts Collection at the National Museum of American History alongside some 400 other patent models relating to the printing trade. These patent models have been a part of the national collections since the early 20th century. 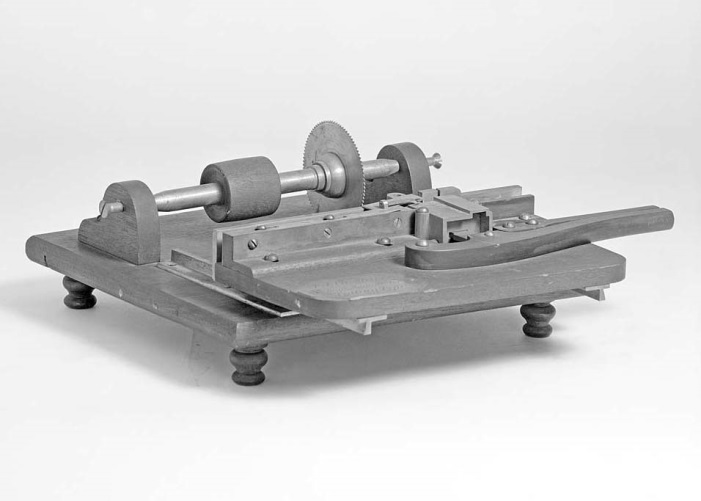 Smith’s model is one of 31 patent models recently surveyed for their conservation and preservation treatment needs, thanks to a small Staff Projects funding grant from the Lemelson Center for the Study of Invention and Innovation. These small internal grants fund museum work related to invention and innovation at the National Museum of American History and around the Smithsonian.

During the last several years, staff at the Museum have been preparing to load information and photographs of the hundreds of graphic arts-related patent models to the web. (View our work here.) It became clear during this process that a small number of models, which had not seen much use (i.e. for research or display) in the last few decades, were in need of conservation treatment, mostly because of ferrous metal corrosion (or rust, in non-technical terms).

The Staff Projects grant from the Lemelson Center, as well as assistance from the Museum’s Preservation Services team, allowed for the hiring of a conservation specialist who inspected the models needing attention and prepared an in-depth report. The report included treatment needs and a conservator’s time requirements for each model. Now, armed with this important information, we are able to better understand the funds required to actually treat the models, preserving them to a stable condition. We will soon be out applying for grants and seeking other types of funding.

The conservation of objects relating to our American national heritage, including the history of American technology, is good museum practice, and, in fact, one of the missions of the Smithsonian—preserving our nation’s heritage for future generations. The patent models in the Graphic Arts Collection are unique, three-dimensional representations of inventions that factored into the United States’ place of dominance during the Industrial Revolution, which emphasizes the importance of their preservation.

Over 200,000 inventions were patented between the years 1790 and 1880, the period when patent models were a requirement of the patent application process. Some of the inventions and inventors of the first half of the 19th century are represented  in a painting commissioned in 1857 entitled “Men of Progress” by Christian Schussele. The painting, a Smithsonian National Portrait Gallery holding, depicts an imaginary gathering of successful inventors—Cyrus McCormick, Charles Goodyear, Samuel Colt, Samuel Morse, Elias Howe, Richard M. Hoe (representing the printing trade), and 13 others—thought to have “altered the course of contemporary civilization.” The painting, also depicting representative patent models, applauds these men and their contributions to the fields of agriculture, armaments, communications, energy, engineering, medicine, textiles, and transportation. 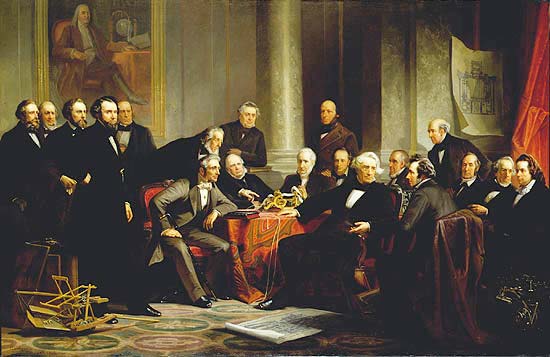 “Men of Progress” by Christian Schussele. 1857. Courtesy of the Smithsonian's National Portrait Gallery.

“Men of Progress” speaks to the depth and breadth of American inventiveness, and to the central role invention and innovation play in the history of the United States. The existence of our patent system is representative of the intellectual property protections offered by the US government, a response to the concept of equal freedoms for all.

Very few patented inventions ever become successful in the marketplace, for a variety of reasons. It is not immediately clear whether John Joseph Charles Smith’s type-cutting invention was ever even manufactured. But we can say that the patent model represents just one of Smith’s many patented inventions (overall, according to Smith’s 1914 obituary in The New York Times, he had been granted 60 US and foreign patents), and more broadly the thousands of inventions patented between 1790 and 1880.

The patent models in the Graphic Arts Collection represent only four percent of the some 10,000 models in the Museum’s collections transferred to the Smithsonian from the US Patent Office in 1908 and 1926. The models reside in various collections at the Museum, in accordance with the subject interests of our different curatorial units. Today you can view about 10 percent of the patent model collections online, and patent models dating from 1836 to 1880 are listed in a two volume publication prepared by Barbara Janssen. (Volume 1, Volume 2.) 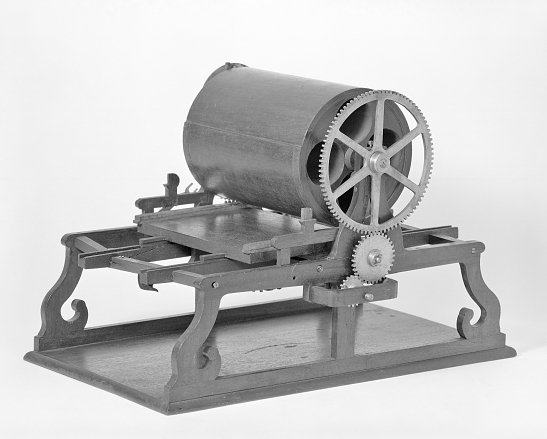 Richard M. Hoe is depicted in the painting “Men of Progress.” This is a patent model of his flatbed cylinder press dated 1844.

Each of these patent models has a story to tell. Some, like those representing the works of John Joseph Charles Smith, can be told in connection with each other; many more represent the only patented invention of an individual. The Museum’s collection of patent models offers an endless repository of yet-untold stories of American technological history.