On November 2 and 3, 2012, the Lemelson Center explored the innovations that enable our democratic system to work and the technologies that have featured prominently in past campaigns and elections in our annual symposium, Political Machines. In the following post, which originally appeared on the National Museum of American History’s O Say Can You See?, associate curator Debra Ann Hashim shares how televised debates spurred conversation amongst her family. 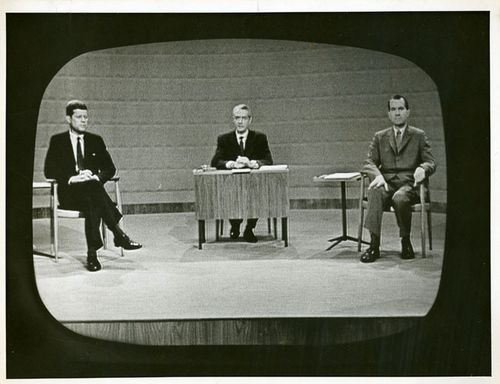 The photograph of John F. Kennedy and Richard M. Nixon is from the debate held in Chicago on September 26, 1960, at the CBS studio. This was the first Presidential debate in history and it was televised, attracting 60% of American households with televisions.

Federal government and politics have surrounded me for most of my life. I grew up in Washington, D.C., the hub of the nation for topics of national importance, where people tend to respond to the events in the national news. Even though I didn’t really start thinking about politics as a participant until I reached high school age, in the early 1970s, I have some vivid earlier memories of hearing conversations about politics at the dinner table.

Sometimes these conversations were lively. At first they were especially so when friends or out of town family members joined us; later on, I was often the one who stirred things up when I started asking questions. My older brother generally sided with my parents in these conversations, while my two younger brothers were too young to get involved. I was the “bleeding heart liberal,” so named by my father, and was usually alone in the views I held. However, that never stopped me from opening my mouth.

One of the activities we always enjoyed in an election year was discussing the candidates. I think the televised presidential and vice presidential debates offered the easiest way to get informed and made for the most immediate family conversation, whether in person or over the phone. Yet for us as a family who thrived on point-counterpoint, for quite a period of time we had to rely on the regular news and TV spots for information. There were no televised debates after 1960 until 1976.

I was too young to recall the very first presidential debates in 1960, between John F. Kennedy and Richard M. Nixon. My first strong memories of talking about issues of the candidates were in 1972 when I was a junior in high school. I was against the Vietnam War and supported George McGovern—even though I remember feeling sad for his first running mate for Vice President, Thomas Eagleton, with the disclosure of his past health history. In terms of family conversation, we actually had some accord this time on certain issues, if not party preference. My older brother, who was of draft age, had filed for conscientious objector status and lost. We were worried sick.

By 1976, at the age of 21, I was right there by the television, anxious to watch and listen to the debates between Jimmy Carter and Gerald Ford. That was the first year I would be able to vote in a presidential election, so it was especially important to me to become as informed as possible. I felt important, too. I would finally begin to understand the feeling of being a citizen who could vote.

Today, I can’t wait to watch these debates; they are one of my favorite parts of any campaign cycle. They offer an opportunity to hear the candidates address the issues in their own words, however rehearsed they may be. I look forward to being able to “get into it” with friends and family even though, as far as the family is concerned, I’m still their bleeding heart liberal.

The Division of Political History is fortunate to have in the collections some objects associated with presidential debates. Below are just a few: 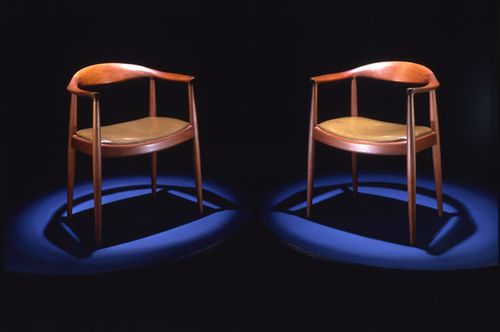 These two chairs were used by Kennedy and Nixon in the televised debates. They are the same chairs that you see in the above photograph. 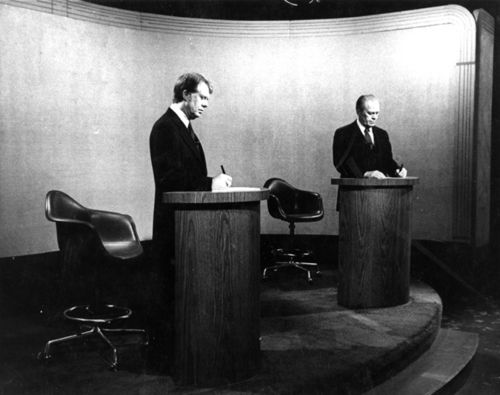 This photograph of then Governor Jimmy Carter and President Gerald Ford was from the 1976 debates. These were the first presidential debates since 1960 and they were sponsored by the League of Women Voters. 1976 was the year of the Bicentennial and the sense of history was very much in the descriptions of the debates given by political commentators. About 53.5% of American households with televisions watched. 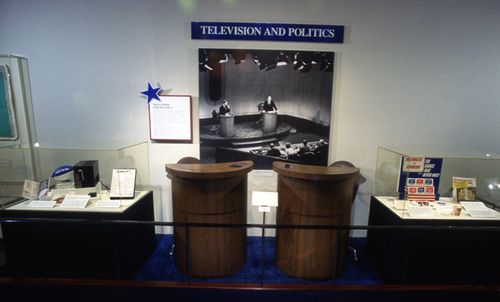 This photograph, taken from the 1996 exhibition We the People: Winning the Vote held at this museum, depicts the podiums and chairs used at the 1976 debates.

Debra Anne Hashim is an associate curator in the Division of Political History at the National Museum of American History.

Podcast: Political Machines - Innovations in Campaigns and Elections, Part 1 (of 2)

Explore the intersection of technology and political advertising, campaigning, polling, and voting in this overview of the Lemelson Center’s 2012 New Perspectives on Invention and Innovation symposium. 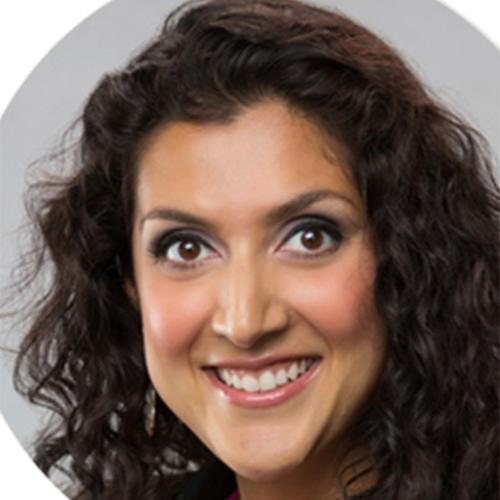 Podcast: Political Machines - Innovations that Let the People be Heard, Part 2 (of 2)

Listen to highlights from "Political Machines: Innovations in Campaigns and Elections," the Lemelson Center’s 2012 New Perspectives on Invention and Innovation symposium, and an interview with POPVOX.com co-founder Rachna Choudhry.