Discovering Art and Innovation in Armenia

In June, I traveled to Yerevan, Armenia as part of My Armenia, an initiative of the Smithsonian and the United States Agency for International Development designed to foster and support cultural tourism and sustainability. I was in Yerevan to lead a multi-day workshop on interpretation and education in museums for museum professionals from around the country. But before my work began, I had a little time to explore the city and learn about life in Yerevan.

I had visited Armenia earlier this year—in January, when the ground was snow-covered, sidewalks were icy, and the temperature didn’t rise above 20 degrees. This trip was, not surprisingly, quite different. The sky was blue, the sun shone, and a light breeze made the 80+ degree temperatures seem spring-like. Also, I saw people! Not bundled up walking quickly from one place to another, but out enjoying the summer, lounging in open-air cafes, and taking advantage of the wonderful parks and green spaces throughout the city.

On my first day exploring I was struck not only by the vibrancy of Yerevan, but also by the prevalence of public art. It seemed that everywhere I walked, I encountered sculptures, statues, and artistic representations of Armenian people and culture. But it was the giant spider outside the Moscow Cinema that especially captivated me. 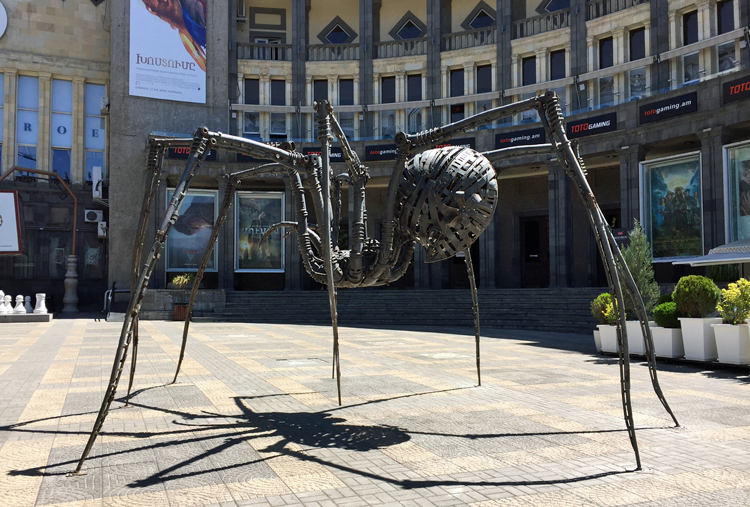 A giant spider sculpture sits outside the Moscow Cinema in Yerevan, Armenia. Photo by Tricia Edwards

As I made my way around the spider, walking through and under its eight giant legs, I spotted another sculpture just down the block. This one depicted a bear. Because it was smaller and shorter than the spider, I was able to examine it closely and even touch it. I realized the bear—as well as the spider—was made entirely of what looked to be recycled metal—bolts, gears, pipes, springs, and other items all welded together. 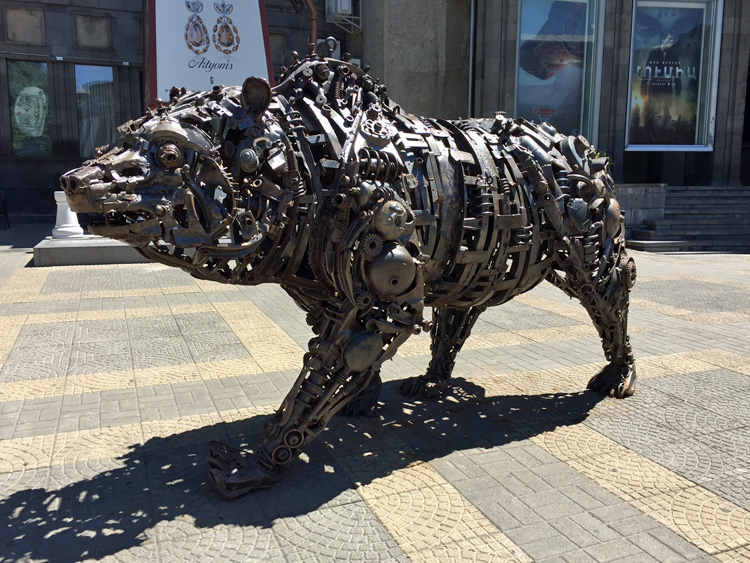 A bear sculpture in a similar style stands near the spider. A close look at the sculpture reveals that it is made from recycled metal parts. Photo by Tricia Edwards

I was intrigued by the bear and the spider and instantly wanted to know more about them and their creator. I was especially curious about the choice of material, and couldn’t help but compare this artist’s use of recycled metal to many inventors we have studied at the Lemelson Center who take material originally created for one purpose and turn it into something new.

When I returned to my hotel (and Wi-Fi), I began a furious Google search to identify the artist. I learned that these and other similar sculptures were created by the Armenian artist Ara Alekyan. Born in Vedi, Armenia in 1959, Alekyan graduated from the Panos Terlemezyan Fine Arts College and later the Yerevan Fine Arts and Theater Institute. He also studied at the Moscow branch of the Yerevan Academy of Fine Arts, and since 1988, has been a member of the Union of Artists of Armenia. In addition to his work in Yerevan, Alekyan’s sculptures are displayed in cities around the world, including Brussels, Istanbul, and Moscow. Though he occasionally sculpts human figures, Alekyan says, "I mainly sculpt four-legged creatures." (I also learned that, like me, seemingly every tourist who visits Yerevan photographs the Spider and the Bear and posts the images to social media!)

Alekyan was inspired to begin sculpting with metal after a 1988 earthquake shook Armenia. Measuring 6.9 on the Richter scale, the earthquake killed tens of thousands, brought down many buildings, and caused widespread damage to infrastructure. In the rusted metal in the ruins of the earthquake, Alekyan saw “sculptures coming out of the corrode[d] pieces shaped by the huge forces of Nature” and began to create art using the damaged metal. Today, Alekyan sources metal from car repair shops and scrap metal dealers, turning what he calls “material which was considered useless in Armenia” into sculpture.  As shown in the short film Born of Fire, Alekyan creates his works by welding together discarded metal pieces, wrapping them in paper, and then setting them on fire, giving the metal a uniform, burnished appearance.

On one of my last days in Yerevan, I walked past a hotel and something caught my eye. I stepped inside the hotel lobby and behind the front desk stood what I immediately recognized as an Alekyan sculpture—this one the head of a man. The hair and beard were crafted out of washers, screws, nuts, bolts, springs, and even a hand crank, many of which still bear numbers, words, and symbols from their original manufacturer. Alekyan is both artist and innovator, turning castoff materials into incredible sculptures and helping us to see old things in new ways.

Alekyan’s sculpture of a man’s head (left) adorns the lobby of Yerevan’s Tufenkian Hotel. A closer look (right) shows the man’s hair and beard are made of nuts, bolts, washers, and more. Photos by Tricia Edwards