When we first began to document invention at the Lemelson Center, we were uncertain about what we might find. No one, to our knowledge, really had a handle on the level or sheer variety of inventive activity, much less on the details of what was actually going on. But once we started looking, inventors seemed to turn up everywhere--not only in large institutional laboratories but also in basements, garages, and kitchens around the country.

Beyond mere numbers, however, we discovered immense diversity within the inventing community, embracing men and women from all ethnic and racial backgrounds. To expand our knowledge of the full range of inventors, we have made it a priority to document and feature women and minority inventors from the past and present. Over the years, middle-school students who participated in our Innovative Lives program have met a number of these innovators, including engineer and educator Hildreth "Hal" Walker and MIT robotics pioneer James McLurkin. You will find out more about Patricia Bath, a prominent eye surgeon and inventor, below in this newsletter.

Our roster also includes Ellen Ochoa, the first Hispanic female astronaut, and inventor Akhil Madhani, from an immigrant family of Indian origin; he holds four patents for a heart-surgery robot.

Adding to our desire to represent diversity not only in the invention community but also in educational methods, the Lemelson Center commissioned the Brewery Troupe to create a puppet play about African American inventor Lewis Howard Latimer, a draftsman best known for working with Thomas Edison and Alexander Graham Bell.

As a final note for Black History Month, let me recommend two books sponsored by the Lemelson Center: Bruce Sinclair, ed., Technology and the African-American Experience: Needs and Opportunities for Study (2004), and Carroll Pursell, ed., A Hammer in Their Hands: A Documentary History of Technology and the African-American Experience (2005). Published by MIT Press, these tandem volumes offer novel perspectives on African American invention from slavery into the 21st century. 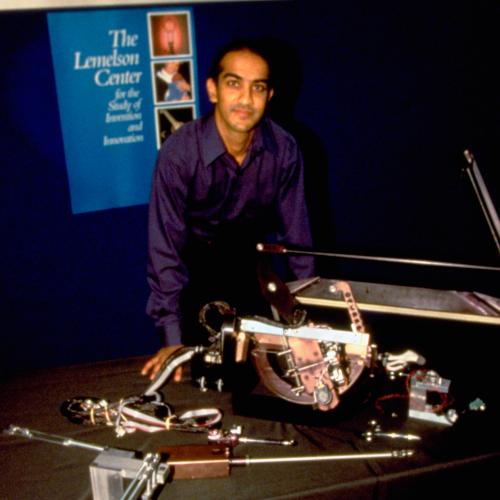 Innovative Lives: The Heart of the Falcon: Akhil Madhani