This post is by Lemelson Fellow Lee Vinsel. Lee is an Assistant Professor at the Stevens Institute of Technology.

This summer I am a fellow at the Lemelson Center, where I am researching the history of automotive safety, focusing on the story of safety in the early period of auto history, from 1900 to 1940, which remains underexplored by historians. My research here has brought me face-to-face with a theme that scholars at the Lemelson Center are currently exploring, namely the role that geography and local networks play in innovative thinking.

The Lemelson Center is developing an exhibition called, Places of Invention, which examines the roles that places and communities play in fostering inventive and innovative activity. Places of Invention focuses on some neat examples of hotspots of innovation: the growth of scientific communities in Washington, DC, in the late 1800s; the rise of manufacturing industries in Hartford, CT, during the mid-19th century; inventive activity around Cambridge, MA, spurred on by World War II military spending; the emergence of Silicon Valley in California and “Medical Alley” in Minnesota during the 1960s and 1970s; the birth of hip-hop in Bronx, NY, which forever revolutionized popular music; and contemporary research in energy research in Fort Collins, CO.

With my research focus, it’s no surprise that I am particularly interested in the role locality has played in influencing automotive safety. Detroit is a famous example of the power of place in shaping technological change, as reflected in works like, Robert Szudarek’s How Detroit Became the Automotive Capital. Often historians focus on the kinds of inventors, engineers, and entrepreneurs who play a direct role in improving the technologies and companies at the center of the local economy. In Detroit, for instance, this central focus would be on the famous automotive firms and the people that worked for and with them. I argue that this focus is too narrow—people of seemingly unrelated expertise sometimes become involved in innovative hotspots. My research includes the role that medical doctors played in improving auto safety.

One example is Dr. Claire Straith. Straith was a plastic surgeon at Detroit’s Harper Hospital who played an important role in improving the practices of reconstructive surgery. According to Straith’s family, on weekends he often went from hospital to hospital, working on people who had been injured in automobile accidents. Most of the people injured were women and children who were sitting in the right-front passenger seat—what Straith called the “Death Seat.” Straith’s experiences led him to become critical of automotive design of the day and to create safety technologies.

Beginning in the early 1930s, Straith installed homemade seatbelts in his own car. He then created and installed crash pads on his car’s dashboard, especially on the passenger side. Straith patented at least two of these devices—the Smithsonian has one of his crash pads in the national collections. The pads were marketed directly to consumers, though few people bought them. However, Straith remained a vocal critic, and he fought tirelessly to get automakers to install safety technologies in their products. 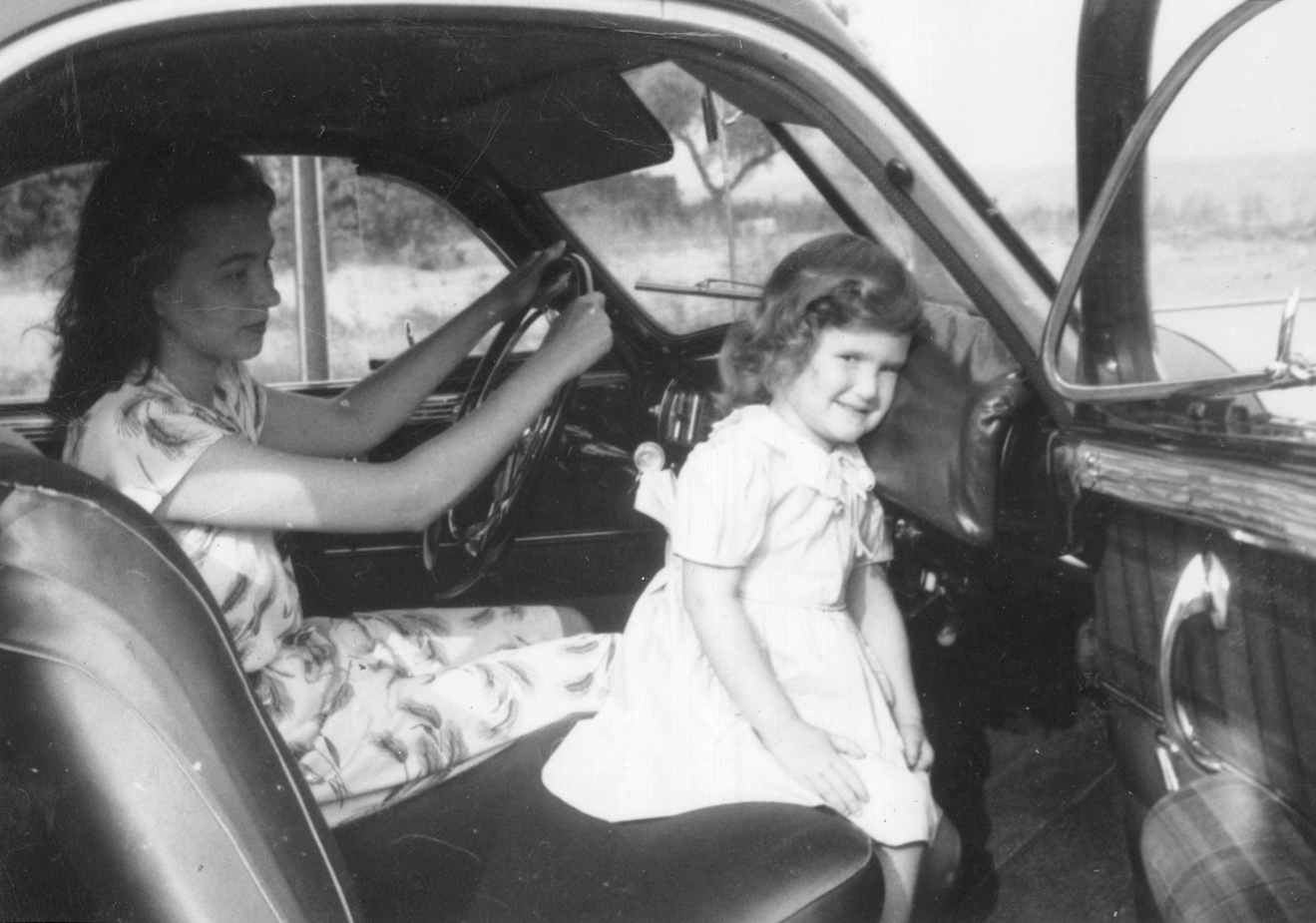 The Straith padded dashboard is demonstrated in this photo by the inventor’s daughter, Jean Straith Hepner, and granddaughter, Grace Quitzow. Photo courtesy of Grace Quitzow.

Some companies listened. Walter Chrysler met Straith, which led to Chrysler engineers building some of Straith’s ideas into the company’s 1937 line of cars. Straith continuously criticized the sharp metallic knobs on cars, which frequently gouged and disfigured people in crashes. The 1937 Chryslers featured recessed knobs on the dashboard. Straith also influenced Preston Tucker, who built safety features into the 1948 Tucker Sedan.

The auto industry was heavily focused on the annual model change during this period, and companies would introduce safety features as part of the publicity of one year’s models, only to backslide and remove the features the very next year. It was not until the mid-1960s—when the federal government created mandatory safety standards—that safety technologies became a permanent fixture of American automobiles.

Straith was not the only medical doctor in the Detroit-area to innovate around auto safety. Another leader in the field was neurosurgeon Elisha Gurdjian, who worked at Wayne State University’s hospital. Gurdjian was also bothered by the kinds of injuries he saw coming into hospitals. He realized that doctors knew far too little about the biological mechanisms of concussions and other trauma-induced brain injuries. He also realized that investigating concussions would involve the study of forces, which lay well outside his own expertise. For this reason, Gurdjian teamed up with a young Wayne State professor in mechanical engineering named Herbert Lissner. The two men began conducting experiments on how forces acted on bodies, using both human cadavers and living, anesthetized, non-human animals (mostly dogs).

While Gurdjian and Lissner’s fundamental contributions were to medical science—especially a field known as impact biomechanics, which they helped found—they also created some innovative experimental apparatus and technical procedures involving already existing technologies. For instance, the two researchers used strain gages, which were usually used to test industrial materials like metal and concrete, to study the strength of bone. They also removed an elevator from an elevator shaft at Wayne State and put an ejection seat in it. They then proceeded to “drop” bodies down the shaft and use pneumatic systems to shoot bodies up it to study the effect of forces on biological systems. No doubt this is innovation, even if it is innovation that we would rather not think about.

Many of Gurdian and Lissner’s experiments were quite grisly, so I will pass over the details here. (For some entertaining accounts of biomechanical studies at Wayne State, see Mary Roach’s Stiff: The Curious Lives of Human Cadavers; interested readers can also contact me at leevinsel (at) gmail (dot) com for a paper I wrote on the topic.) I also believe that some of their experiments on living animals were clearly unethical, but it is impossible to deny that their research played an important part in improving automobile safety. Indeed, when the US government created automotive safety standards in the mid-1960s, regulators built Gurdjian and Lissner’s findings of how much force the human body could tolerate directly into the new federal rules.

Medical doctors in Detroit, the automotive capital, made fundamental and early contributions to auto safety. In the end, it took a whole movement, including safety advocates like Ralph Nader, to create national safety standards in the United States, but we owe the innovations of Straith, Gurdjian, and Lissner a great deal.