Extraordinary Attractions! Be Amazed! Must See!

Hidden Motors Give Life to Prehistoric Monsters. Robot Cow Moos and Gives Milk. Mechanical Monster Eats Girl on Movie Stage. These spectacles and more were created by Messmore & Damon, a New York firm that specialized in window displays and parade floats. Founded in 1916, the dynamic and creative duo of George H. Messmore and Joseph Damon designed and constructed parade floats, dioramas for museums, exhibits for expositions, displays for department stores, scenery, exhibits for corporate clients, and for film, theater, and television. Most of their parade and department store work featured animated mechanical devices. 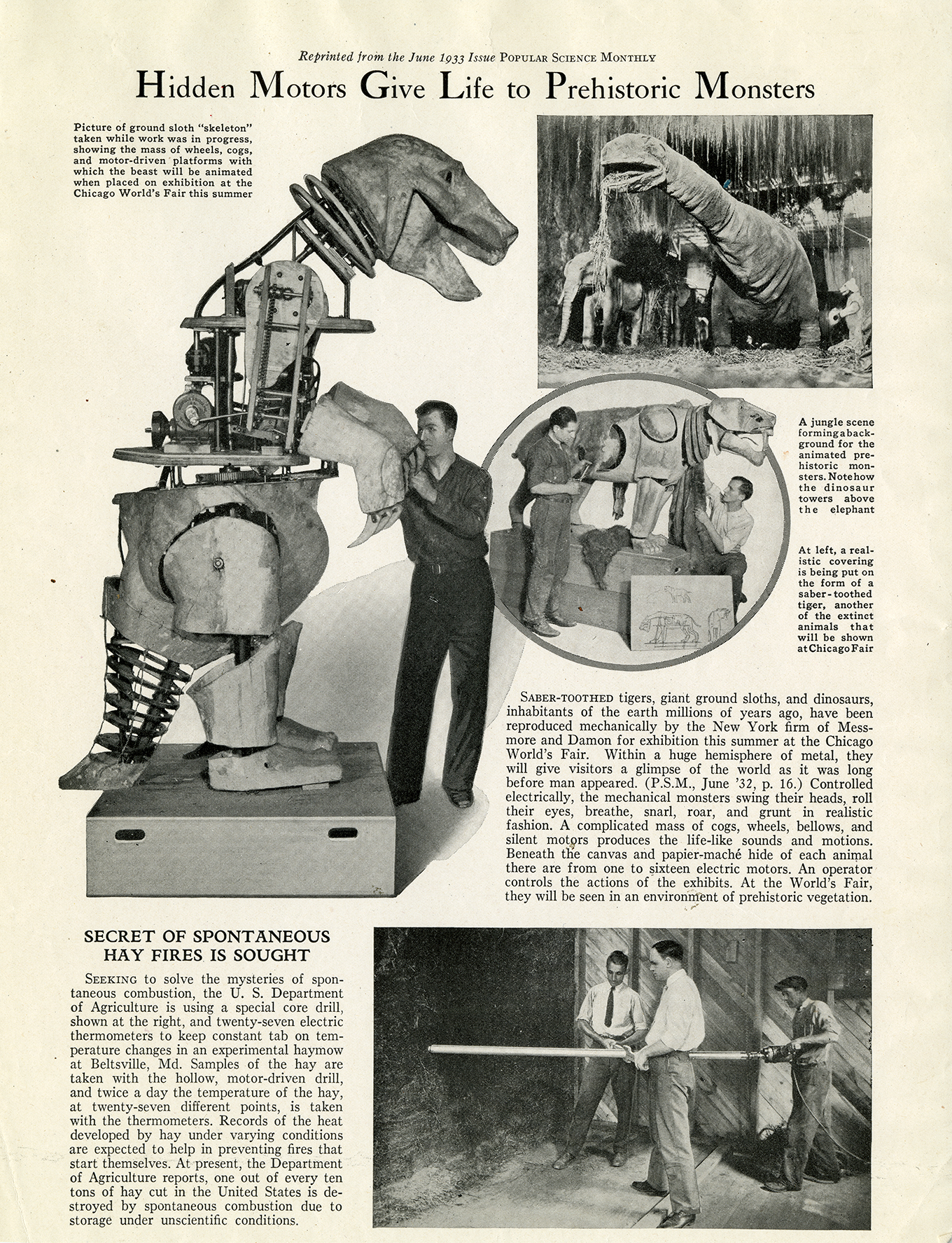 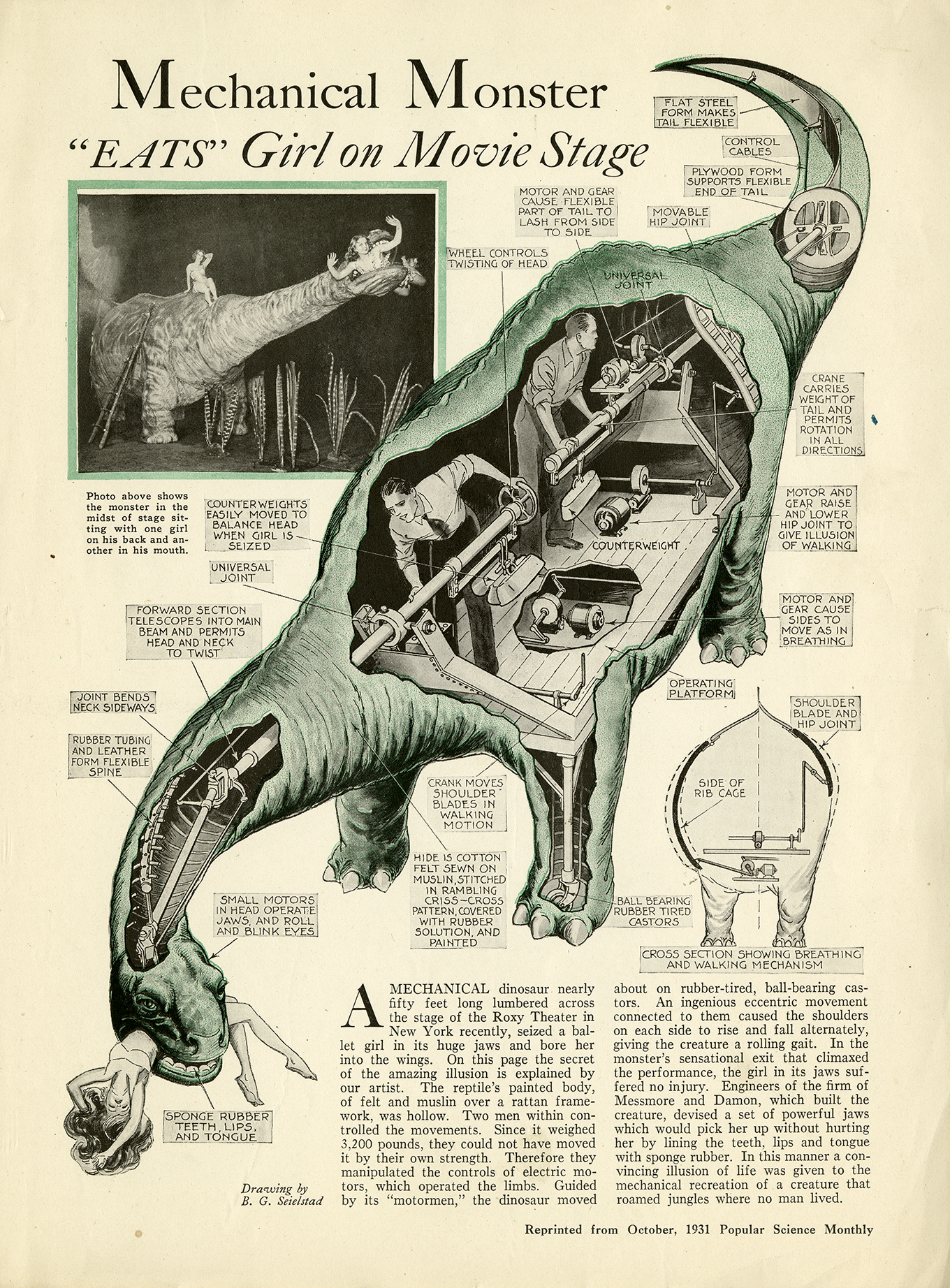 Messmore & Damon brought to life huge dinosaurs, tigers, mastodons, dragons, other monsters, and even cows. One of their creations was a life-sized (48 feet long, nine feet high, 4,000 pounds) mechanized reproduction of a dinosaur, Amphibious Dinosaur Brontosaurus (aka “Dolores” or “Dino”). It could laugh, breathe, roll its eyes, shake its head, and move its jaws. It was a must see. Created for the Century of Progress International Exhibition (1933-1934), “The World a Million Years Ago,” Dino was made of layers of chicken wire, canvas, rattan, papier-mâché, and paint. A human ran a complicated series of motors, chains, ball bearings, gears, cranks, counterweights, and universal joints that worked in concert to create a spectacular experience. The dinosaur was capable of moving its head in all directions and it had a moveable jaw. George Messmore’s 1933 patent (US Patent 1,898,587) stated “the jaw was intended to hold a dancer so that the dancer may be lifted up by the animal for entertaining purposes.” Dino hit the entertainment circuit after the Fair entertaining thousands at department stores and other venues. He even inspired an essay contest for youngsters who were asked, “What Would Happen if Dino Lived Today?” 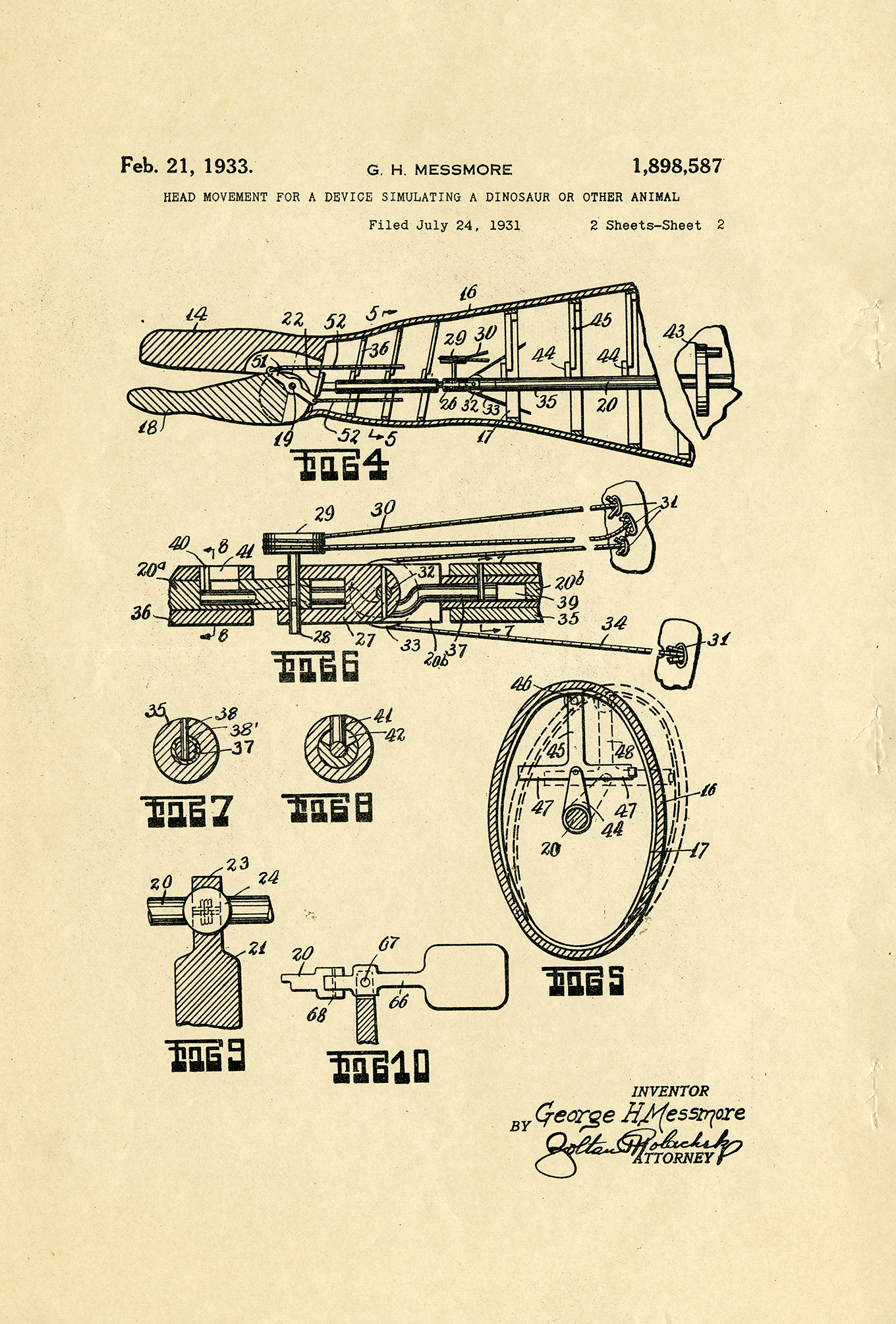 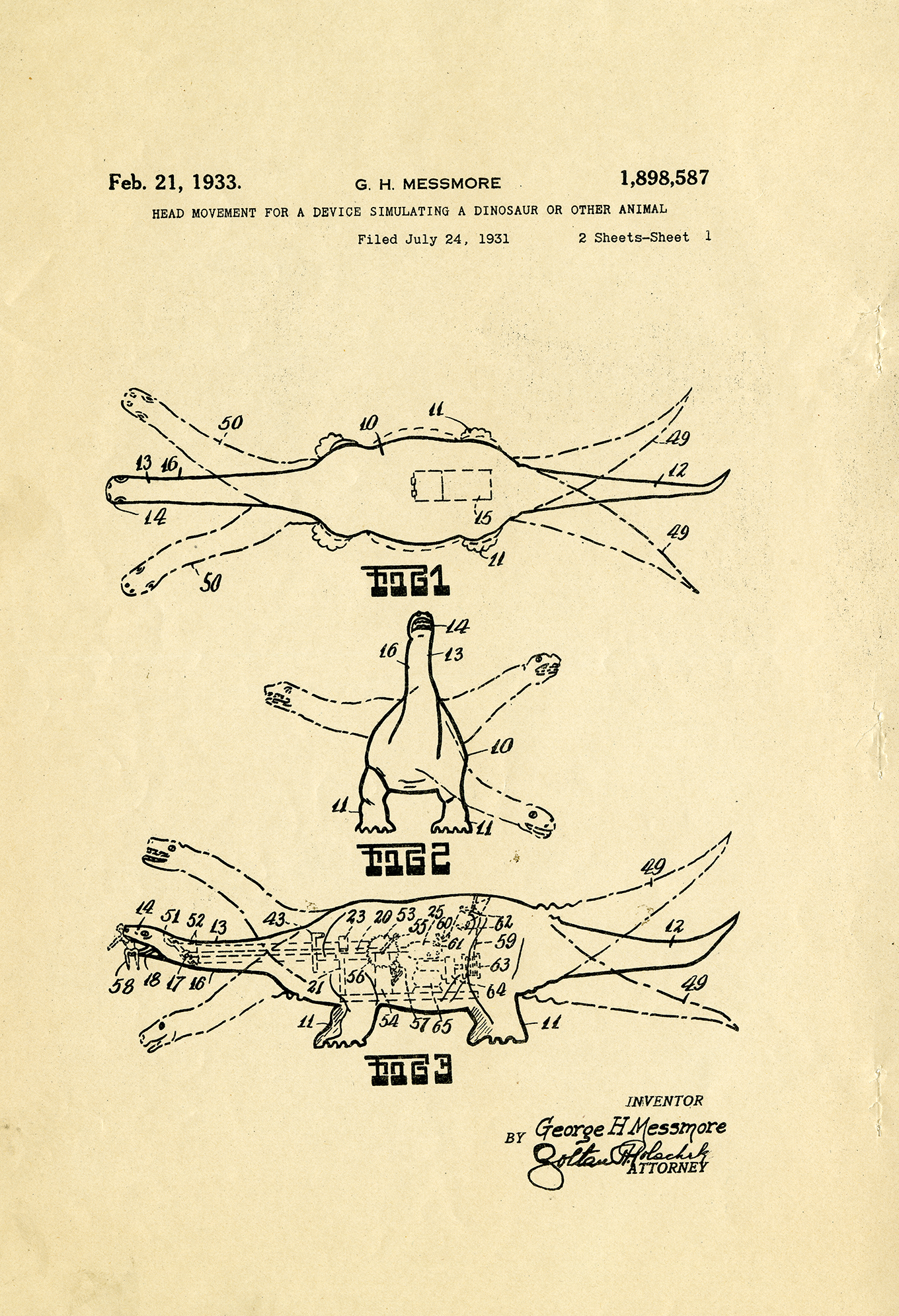 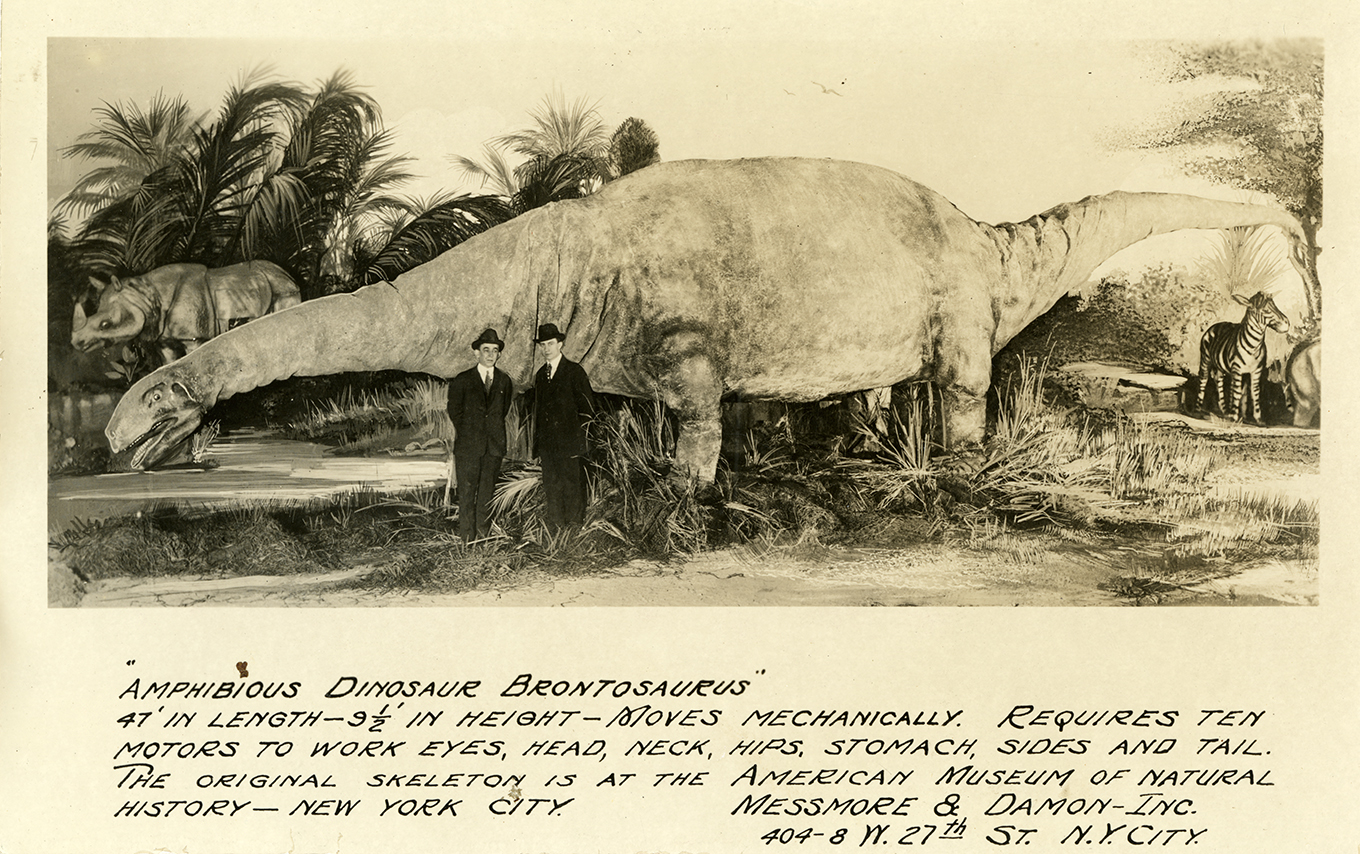