This workshop offered Washington, DC-area teachers the opportunity to learn how to adapt a simple, inventive, skill-building activity for their students.

There’s nothing like seeing people’s eyes light up when they are experiencing inventive problem solving as members of a team. In this case, I enjoyed spending Saturday, June 2, 2018, watching teachers’ creative efforts during two “Grab Bag Inventing” workshops—part of a special DC STEM Fair Teacher Seminar at the University of the District of Columbia hosted by the TGR Foundation and DC STEM Network. The Lemelson Center’s main educational message is “everyone is inventive” and, once again, the 25 teachers in these workshops proved it.

Grab Bag Inventing is an open-ended, playful, problem-solving activity using common materials. Anyone can engage in it and flex their inventive muscles. I (as well as other Lemelson Center staff) have led this activity countless times with a wide range of audiences, from elementary and middle school teachers and kids in both urban and rural areas to parents, museum educators, historians, and other groups. The activity’s power lies in its simplicity. No special skills are needed; there are no right answers; there are unlimited outcomes; and it can be done almost anywhere with almost any materials.

Here is the hands-on activity as I posed it to this DC STEM Fair group of teachers from primarily public and charter schools in the Washington, DC metro area...

After a brief introduction about the Lemelson Center, Spark!Lab, and our invention education approach, I launched into activity instructions.

The teams worked on their invention prototypes for about 20 minutes, and then gave presentations to the rest of the group about the problem they were trying to solve, the team’s inventive process, and how the resulting prototype was meant to work. There were a total of eight teams in the two workshops and, according to five of them, students' lost pencils is a widespread issue that needed an inventive solution. Who knew that students forgetting or misplacing their pencils was such a common school problem?! Well, maybe if you’re a teacher you did, but I was certainly surprised.

Once I had congratulated them on their inventions, the teachers were delighted to hear about an unexpected next step: each team must pass their creation to a neighboring team. Now teams had about 15 minutes to “innovate” upon the invention they received, either by improving upon it directly or using those materials to create something new. I should point out that several teams did indeed continue to tinker with the pencil-related prototypes; clearly there is a big need out there. It was during this phase two that I could really see those proverbial lightbulbs flashing in their heads.

After the teams had presented their innovations, we discussed the activity. Everyone agreed that the two-part process was an especially fun, easy, and easily replicable way to get their own and their students’ inventive juices flowing. They were bubbling with ideas about how to incorporate this activity into their classrooms and after-school workshops. Several STEAM (A is for Art) teachers talked about doing this activity with recyclable materials and maybe spreading it over two days, first focusing on the initial invention activity in the classroom and then having kids bring in their own materials for the innovation part. A literacy teacher thought she could adapt it for her students by having them write stories in a similar two-step fashion, innovating upon what others wrote. The general consensus seemed to be that kids with different learning styles  and interests would enjoy this activity and also build confidence about their own inventive skills. 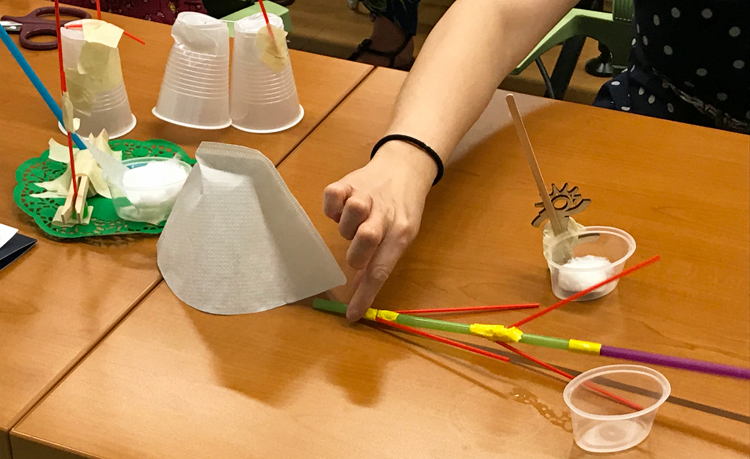 This team innovated upon another group’s invention by adding a water piping and recycling system to a village water pump and collection system that works using wind power. © Smithsonian Institution; photo by Monica Smith 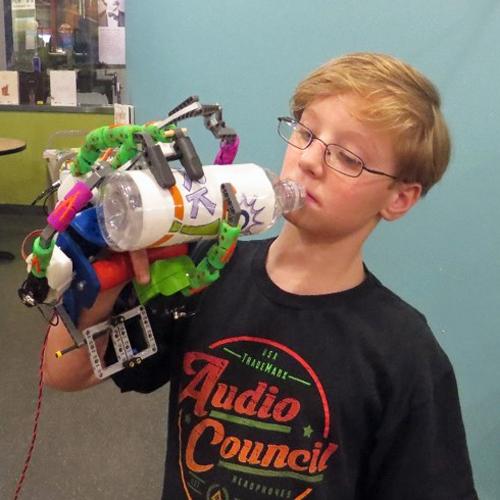 People do such impressive things in our exhibition every day—here are some anecdotes and impressions from a Facilitator.