Handprints on Hubble: An Astronaut's Story of Invention by Kathyrn D. Sullivan is part of the Lemelson Center Studies in Invention and Innovation book series with MIT Press. Courtesy of MIT Press

Handprints on Hubble: An Astronaut's Story of Invention

The first American woman to walk in space recounts her experiences as part of the team that launched, rescued, repaired, and maintained the Hubble Space Telescope. Published in the Lemelson Center Studies in Invention and Innovation book series with MIT Press.

The Hubble Space Telescope has revolutionized our understanding of the universe. It has, among many other achievements, revealed thousands of galaxies in what seemed to be empty patches of sky; transformed our knowledge of black holes; found dwarf planets with moons orbiting other stars; and measured precisely how fast the universe is expanding. In Handprints on Hubble: An Astronaut's Story of Invention, retired astronaut Kathryn Sullivan describes her work on the NASA team that made all of this possible.

Sullivan, the first American woman to walk in space, recounts how she and other astronauts, engineers, and scientists launched, rescued, repaired, and maintained Hubble, the most productive observatory ever built. Along the way, Sullivan chronicles her early life as a “Sputnik Baby,” her path to NASA through oceanography, and her initiation into the space program as one of “thirty-five new guys.” (She was also one of the first six women to join NASA's storied astronaut corps.)

She describes in vivid detail what liftoff feels like inside a spacecraft (it's like “being in an earthquake and a fighter jet at the same time”), shows us the view from a spacewalk, and recounts the temporary grounding of the shuttle program after the Challenger disaster. Sullivan explains that “maintainability” was designed into Hubble, and she describes the work of inventing the tools and processes that made on-orbit maintenance possible. Because in-flight repair and upgrade was part of the plan, NASA was able to fix a serious defect in Hubble's mirrors—leaving literal and metaphorical “handprints on Hubble.”

Kathryn D. Sullivan is a NASA astronaut (retired), former Under Secretary of Commerce for Oceans and Atmosphere of the National Oceanic and Atmospheric Administration (NOAA), and an inductee in the Astronaut Hall of Fame.

Praise for Handprints on Hubble

[A]n accessible and fascinating memoir of [Sullivan’s] experiences as a pioneering scientist, highlighted by her work on the Hubble space telescope… Sullivan’s fine volume shines a light on the nuts-and-bolts tasks that make extraordinary endeavors possible.

Throughout the narrative, [Sullivan’s] easy hand with details and infectious enthusiasm make for a winning combination. A smooth delivery of the nit and grit behind the success of the Hubble.

Dr. Sullivan starts out headed for the bottom of the sea. Soon, she flies us 200 miles above the sky, using her head, heart, and hands to solve problem after problem – and help us take in views that are out of this world. She does it all with her veneer of astronaut cool, of course. What an adventure – no wonder she loves it.

A wonderful tale of the most remarkable scientific instrument of our time, and the people who made it possible. This fascinating story of the Hubble Space Telescope’s visioning, development, and miraculous recovery, written by my longtime friend and two-time shuttle crewmate Dr. Kathy Sullivan, pays tribute to the unsung heroes of Hubble’s initial deployment and subsequent servicing.

So that’s how it all works! Kathy Sullivan’s insider knowledge and spacewalking savvy turn the nuts-and-bolts narrative of a giant piece of hardware into a daring space odyssey. From roaring rockets to tiny wrenches – as human ingenuity shaped NASA technology – it’s an intimate portrait of our magnificent Hubble eye-in-the-sky. I was, yes, riveted. 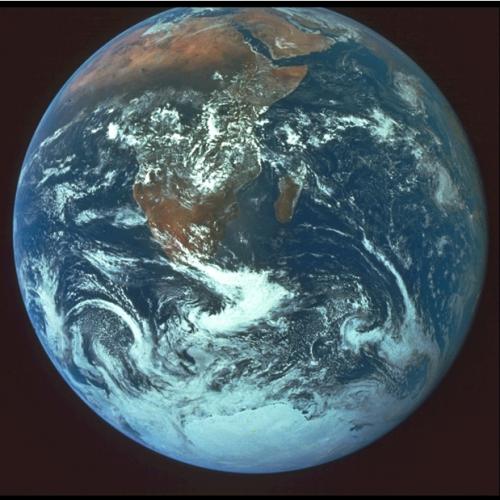 The famous photograph of the whole Earth, taken in 1972 by the crew of the final Apollo mission and dubbed "The Blue Marble," is one of the most iconic images of our time.