In 2011 I was managing the Explore More Stuff Lab at Discovery Place in Charlotte, North Carolina. As part of an upcoming lab unit we had received a corporate grant. which allowed me to purchase the first of many 3D printers I would have the opportunity to operate. The printer I chose in 2011 was the MakerBot Thingomatic (TOM) Kit. Yes, it was a kit. Makerbot sold completed machines but they cost more, and who wouldn’t want to opportunity to assemble a 3D printer themselves?

Our team was so excited when the package arrived. We opened the box to find box after box after box after box nested inside. There must have been 10 boxes containing what seemed like 1000 parts! After taking stock of what we had, we went to work assembling the machine. In every bit of free time we had we walked through the instructions as carefully as we could—in a public museum space. Wires had to be stripped, wooden frames assembled, extruders built, cables attached to the mother board, and components soldered to the stand-alone interface board (a new option at the time of purchase). 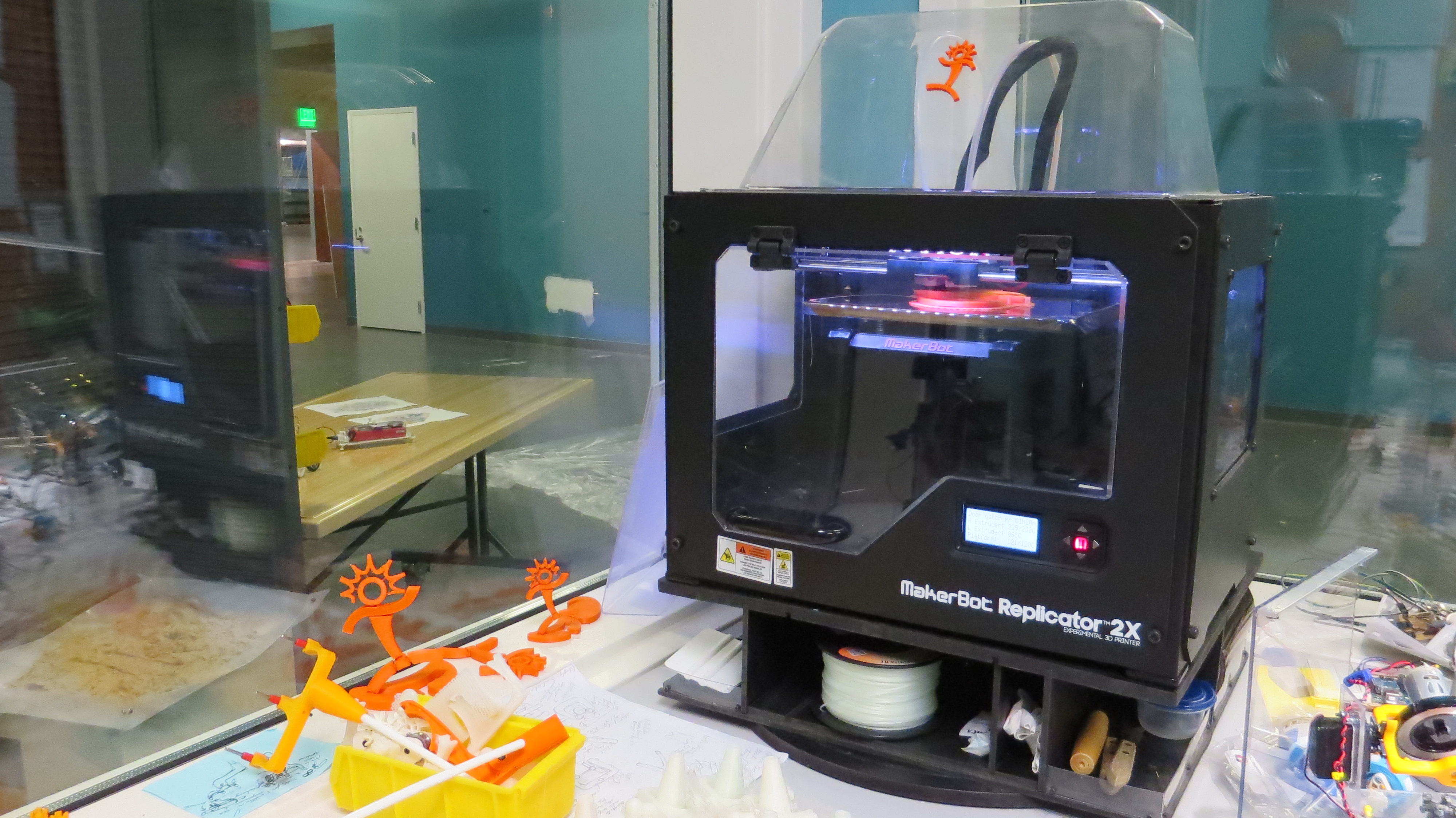 After about three weeks of building and tinkering with the TOM we were off and running. We began by downloading .stl (stereo lithograph) files from the web and printing items. Within a week we started sketching some of our own items using 3D drawing freeware. We were making lots of stuff, though we weren’t quite sure what the best use or visitor interface with the printer would be. In most cases an interpretive exchange began with the visitor saying, “Is that a 3D printer?” or “I have only seen those on TV and in magazines, I have never seen one working and in person.” These regular interactions lead to many lengthy conversations about how the machine works, as well as dialogues about the possible implications of 3D printing for the future.

One day while flying the lab’s quadcopter, another object that lead to conversations geared around implications for the future, I brought it down pretty hard. Something inside broke. I was frustrated and didn’t like the idea of budgeting money to fix the result of my bad flying. While talking to Doug, one of my coworkers, I mentioned the crashed copter. He said, “Why don’t you 3D print a replacement part.” We had this great 3D printer in the office. Why wasn’t that one of my first thoughts? I looked online and found the part I needed. Apparently that part in that particular quadcopter breaks often. Within two hours I had downloaded, printed, and installed the replacement. It worked great. On that day my eyes were opened to what the 3D printer really had to offer. I got what Bre Pettis, founder of MakerBot, referred to in a podcast as “MakerBot eyes.” If we had a need for something, we could just 3D print it. This was true for more items that I had expected.

Fast forward four years. I am now at the Lemelson Center and part of the Smithsonian Institution. In my office is a MakerBot Replicator 2X. Most days my machine is churning out parts for the Spark!Lab or one of our Spark!Lab network partners. I print so many things on the machine I began to ask myself the question, “Has 3D printing become a crutch?” It seems that whenever I need to solve a mechanical problem I default to a 3D printed solution. The following items/thoughts are a few of examples where defaulting to a 3D printed solution has been the case:

These are just some of the “3D printed solutions” I have found over the past few months. As I think about these solutions I realize that some of them might not have to be 3D printed. Some of these things could have been made from Plexiglas, wood, or even purchased on the web. Why do I tend to go first to the 3D printer? Maybe it is the safety issue—there are no sharp blades. Maybe it is the fact that once I get a good product, I can simple print more when I need them. Maybe it is the flexibility of being able to make almost anything and make it look good. Maybe it all stems back to that day when I printed the quadcoptor replacement part. Whatever it is, the 3D printer has become a passion for me. 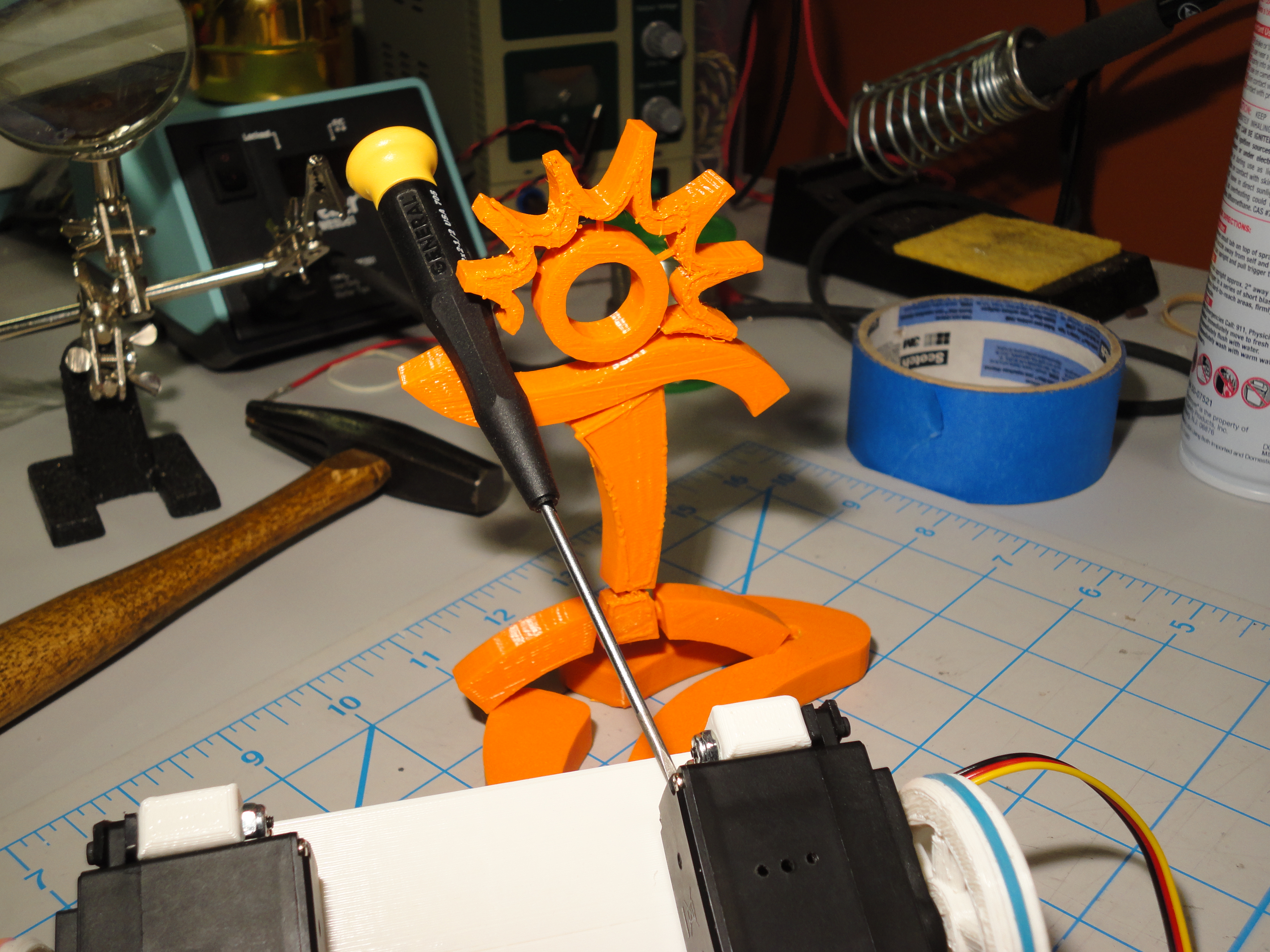 Over the past four years I have drawn and printed well over 100 different designs. This number includes versions 1.0 through n.0 of the things that needed tweaked along the way. These items have been used in a large number of hands on museum activities. Literally thousands of museum guests have worked with something I 3D printed. Most of them did not even seem to be aware that they were interacting with 3D printed materials. With high volume museum use, the parts are pushed to their limits. Some designs turn out to be great hits and some turn out to not stand up to their intended purpose. For the ones that did not last, I could surely make a tweak in the drawing or print a part to repair them. Has 3D printing become a crutch or is it simply an invaluable tool for doing my job? I would like to think it is the latter.