How Do We Know Exactly When the New Year Begins?

Appreciating the invention of standardized time zones as the calendar turns to 2020.

Like many Americans, I'm traveling across time zones for the holidays, going to California to celebrate Christmas with family and then flying back to Washington, DC, on New Year's Eve. As I ring in the new year, I will think of my family and friends out West where it will be 9:01 p.m. on December 31, 2019 when my East coast clock and calendar say it's 12:01 a.m. on January 1, 2020—a new decade.

I don't know about you, but I think the fact that people around the globe generally accept using standardized time zones assigned to our diverse localities is kind of amazing. This led me to research the question: What is the invention story behind national and international time zones?

Fortunately, my National Museum of American History (NMAH) colleague, curator Carlene Stephens, is an expert on this topic. So, I turned primarily to her publications for reference (check out the suggested readings at the end of this blog post).

As hard as it is to believe, well into the 19th century, time was a relatively vague, community-focused concept based primarily on observations of the sun overhead. Even local clocks varied. With the publication of the British Nautical Almanac in 1767, some countries began limited use of Greenwich, England, as the starting point for calculating specific times (vital for assessing longitude) for navigation and scientific observations. However, it wasn't until the invention and expansion of railroads during the 1800s that people began to argue more widely for the need to develop standardized time zones across countries, let alone around the world.

In the US, this standardization was necessary in part because different regional and national railroad companies used different clocks in the nineteenth century. “It is well to remember that Railways have no standard time for the Union, but usually run by the time of the principal office of the Company. In almost all hotels West, the dials of clocks indicate the railway and the time of the locality. To prevent disappointment, it is better to inquire at the hotel by what particular time one desires to travel on, runs by.”1

After it became obvious that this system was untenable, most railroad companies in the US and Canada voluntarily adopted a new Railway Standard Time. Many people were involved in making this possible, but the primary coordinator and advocate was William F. Allen, a former railroad engineer and then publisher of transportation timetables, who was chosen by the railway industry to devise a standard time zone map for North America. On Sunday, November 18, 1883, Standard Railway Time went into effect, with companies synchronizing their clocks at what was deemed noon that day on the seventy-fifth meridian west of Greenwich (which is now the Eastern Time Zone in the US). To communicate this significant moment of synchronization, a telegraph signal was sent by the US Naval Observatory in Washington, DC—which had initiated a national time service in 1877—to the Western Union headquarters in New York City, which then sent out telegraph communications to the rest of the country. 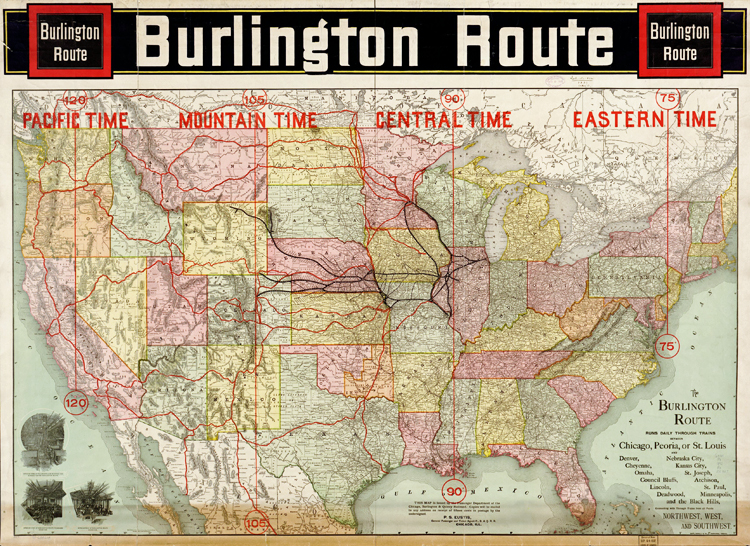 For inventing the worldwide time zone system, major credit often goes to Sandford Fleming, chief engineer of the Canadian Pacific Railway. Around 1876, he came up with a system that started with the prime meridian (zero degree longitude) passing through Greenwich and then divided up the day into twenty-four hours—rather than two twelve hour designations using A.M. and P.M.—for twenty-four zones around the world.  We have his fascinating circa 1880 twenty-four-hour pocket watch in our NMAH collections. 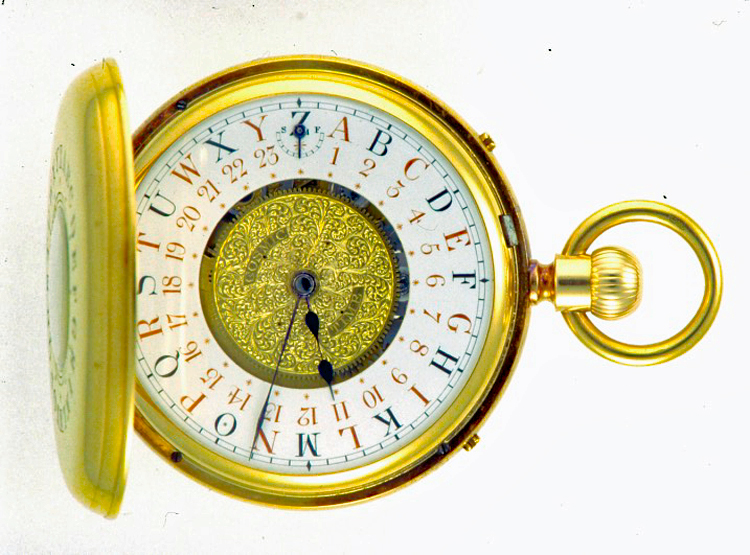 The “Cosmic Time” dial of Sandford Fleming’s British-made pocket watch from around 1880, NMAH 1990.0659.01, with letters corresponding to world time zones and a 24-hour (instead of 12-hour) dial with hands marking local time. Although not the first or only proponent of standardized time, Fleming was the chief engineer of the Canadian Pacific Railway when he devised an influential plan for worldwide time zones around 1876. © Smithsonian Institution; photo by Rick Vargas, 91-2029

In October 1884, a group of diplomats and technical specialists gathered in Washington, DC, for an International Meridian Conference (IMC) to try to standardize time zones across the globe. (By then, most American cities and large towns had already adopted standard time.) The IMC recommended that “the nations of the world establish a prime meridian at Greenwich, count longitude east and west from the prime meridian up to 180 degrees in each direction, and adopt a universal day beginning at Greenwich at midnight.”2 However, the IMC had no authority to enforce their plan either nationally or internationally. It took several decades for the gradual worldwide adoption of a twenty-four-hour time-zone-based system centered on Greenwich Mean Time (GMT). 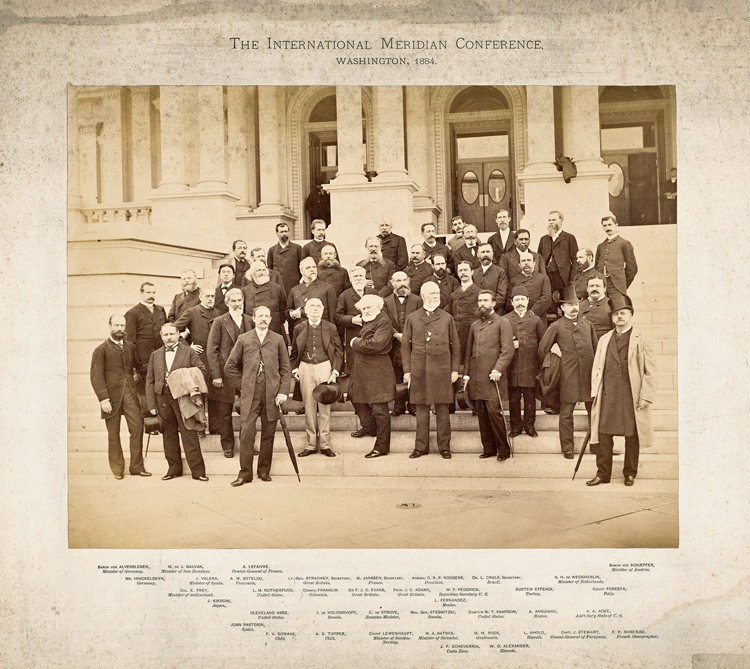 The participants of the 1884 International Meridian Conference (IMC) held in Washington, DC, were photographed in front of the State, War, and Navy Building (now known as the Old Executive Office Building). Although the IMC did not have authority to enforce its recommendations, the conference resulted in the gradual worldwide adoption of a twenty-four-hour time zone system with Greenwich, England, as the prime (zero) meridian. Architekturmuseum der Technischen Universität Berlin, courtesy of Robert Harry von Gent, Utrecht University

Strangely to me, the US government didn’t officially adopt a standardized time zone system until Congress passed the Standard Time Act of March 19, 1918.3  At that point, the nation's five time zones were proclaimed: Eastern, Central, Mountain, Pacific, and Alaska. The Act also included a provision for Daylight Savings Time (DST). An unpopular move, DST was repealed after World War I, but then re-adopted by Congress during World War II to promote electricity conservation.

Currently, the US states of Arizona and Hawaii and the US territories of American Samoa, Guam, Northern Mariana Islands, Puerto Rico, US Minor Outlying Islands, and the US Virgin Islands still do not observe DST.4 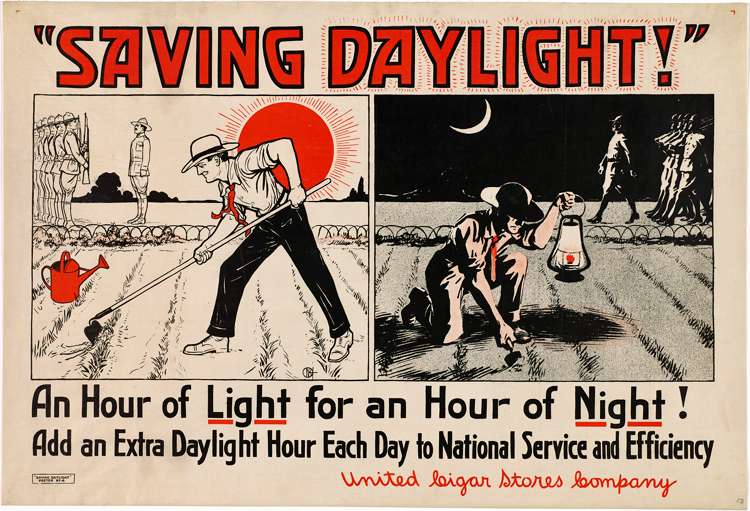 In 1972, Universal Time Coordinated (UTC), or “Zulu Time,” replaced GMT as the world standard for time . . . but note that it is NOT a time zone system.5  UTC is based on atomic measurements rather than the earth’s rotation, and does not change with DST in the US or in other countries that observe their own versions of it.6  UTC atomic time is maintained by the Bureau International des Poids et Mesures, an intergovernmental organization based in France; the US is one of sixty-one member states.

Now when I travel back and forth across time zones and then flip my wall calendar to January 2020, I will thank the people who advocated for and eventually influenced world governments to adopt a shared international twenty-four-hour time zone system that we can all rely on.

3 An Act To Save Daylight and to Provide Standard Time for the United States, Sixty-fifth Congress, Session II, Chapter 24, March 19, 1918, accessed December 20, 2019, https://www.loc.gov/law/help/statutes-at-large/65th-congress/session-2/c65s2ch24.pdf?loclr=blogloc

Dolan, Graham. “The Greenwich Meridian . . . Where East Meets West: The Adoption of a Prime Meridian and the International Meridian Conference of 1884.” http://www.thegreenwichmeridian.org/tgm/articles.php?article=10 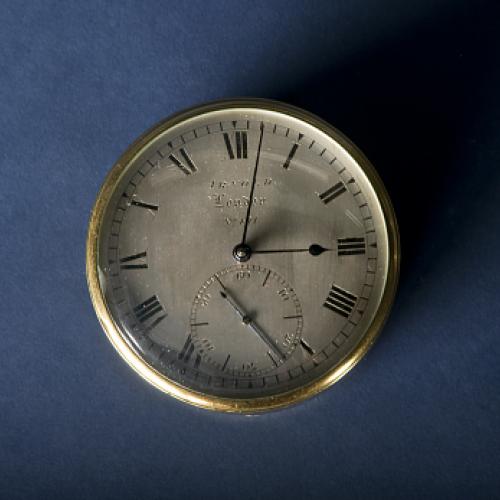 How the sea clock changed navigation and timekeeping.