How the Invention of the Air Brush Transformed Commercial Art

Simple in construction and operation, the air brush offered new opportunities in art and photography.

Many collections held by the Archives Center at the National Museum of American History document late nineteenth- and early twentieth-century manufacturing processes—steam engines, boilers, turbines, water wheels and more. Manufacturers used photographs to document their work and the photographs were published in handbills, pamphlets, and catalogs, resulting in what is now known as trade literature. Catalogs were the chief means by which a company communicated its mission and promoted its products, providing a visual offering of its goods, with multiple views, details, pricing information, and company history. Catalogs were intended to be temporary, typically discarded after going out of date. After all, a more recent catalog was sure to follow.

Illustrating catalogs began with wood engravings and steel engravings, then moved to lithography which gave way to chromolithography and then photomechanical printing. Many catalogs contain airbrushed photographs created by in-house staff, but more likely created by an advertising or commercial art company that a manufacturer contracted to assemble and print the catalog.  The airbrush was used as an “after treatment” on photographic prints and negatives to manipulate, modify, and enhance the original print in monochrome or color. A finishing department at a commercial photography studio airbrushed images with paint to create a matte effect, causing the images to appear even sharper and smoother, and elevating the image to a level of clarity that emphasized the details. This manipulation, or retouching, reveals how important this work was to ensure a company’s product looked its best.

“The exquisitely finished photographs of machines, furniture, automobiles, and jewelry seen in the catalogues of the manufacturers of these products represent, alas! not so much the perfection of photographic methods as the super-excellence of air brush work.” (Photo Miniature, March 1921, page 3). 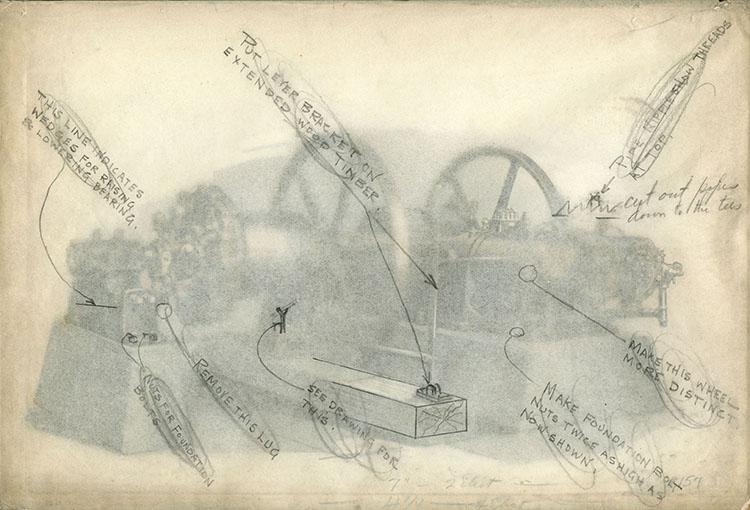 Overlay notes detail the changes to be made to an illustration of a Cooper-Bessemer engine from the 1920s. Cooper-Bessemer Corporation Records, Archives Center, National Museum of American History 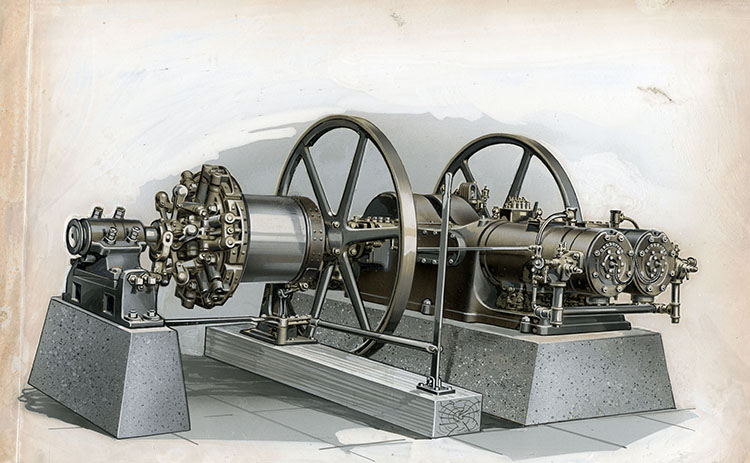 An illustration of a Cooper-Bessemer engine from the 1920s after air brushing, AC0961-0000002-02. Cooper-Bessemer Corporation Records, Archives Center, National Museum of American History

The airbrush became widely used in the early twentieth century for preparing images for reproduction. As printing costs became cheaper, coupled with the use of the air brush which saved time, catalogs were produced quickly and more often, resulting in multiple different versions, targeted at audiences in the United States and in other countries. For example, James Leffel and Company had a series of catalogs depicting its turbine waterwheels designed and distributed in the Latin America market. 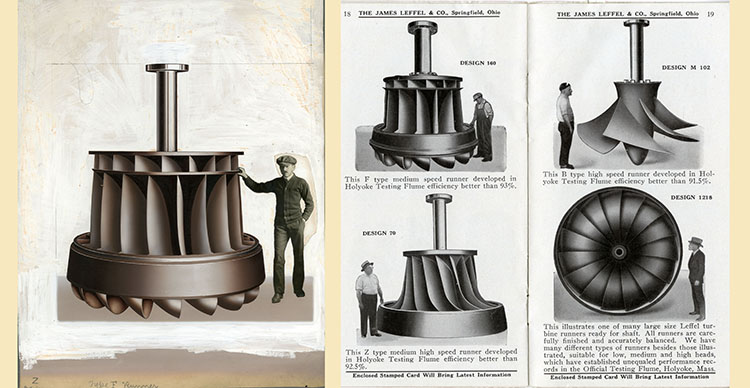 The airbrush has six main parts: a body, trigger, nozzle, needle, color cup, and air hose, which attaches to an air supply (foot pump or motorized). But where exactly did the air brush come from?  Many inventors claim it as their own.

The air brush was known first as an “atomizer” and was patented in 1876 by Francis Edgar Stanley (1849-1918), a photographer, inventor, portrait painter, and businessman. Stanley’s patent application for an improvement in atomizers (US Patent 182,389 ) stated, “My invention relates to such improvements in atomizers that they may be employed for finishing photographs in water-colors, India ink, and crayon, and also for all kinds of shading in which color can be used in a liquid State. The invention consists in inserting an adjustable wire with pointed end into the liquid tube, to regulate the amount of liquid issued. A cap or hood with detachable nozzles, having varying orifices, admits the confining of the spray to a certain surface.” Stanley used the atomizer to break up the paint into very fine particles. While Stanley moved onto other inventive and innovative endeavors, Leslie Curtis, Abner Peeler, Charles Burdick, Olaus Wold, Henry Thayer and Charles Chandler joined the airbrush crowd.  (Francis Stanley, with his twin brother Freelan, went on to receive 23 patents related primarily to steam and cars and become known for the Stanley Motor Carriage Company that manufactured their famous automobile, the Stanley Steamer.)

Leslie L. Curtis (1855-1915) an artist from Cape Elizabeth, Maine, invented an atomizer for coloring pictures (US Patent 248,579) in 1881. Curtis’s atomizer made use of a bellow or elastic bulb that would deliver the air to distribute the paint.

Abner Peeler (1836-1895), a jeweler and inventor from Iowa, invented a “paint distributer” (US Patent 256,852) in 1882 that “distributed pigments across a surface.” Peeler assigned his patent to brothers Charles and Liberty Walkup for $700. The Walkups formed the Rockford Manufacturing Co. to produce the new airbrush, but later changed the name to the Air Brush Manufacturing Company in 1883. According to Peeler’s obituary in the Fort Dodge Chronicle of November 2, 1895, “While Mr. Peeler possessed great natural ability for mechanical principles, and as an inventive genius, he was wholly deficient in the ability to accumulate property, consequently never realized to any great extent any benefit from his inventions.” Peeler went on to spend time working on typewriters. It was Walkup who marketed the air brush with great success.

Liberty Walkup (1844-1922) was born in the town of Oregon, Illinois. He grew up on a farm and then enlisted in the Union Army in 1862, serving in Company K, 92nd Illinois Infantry; he was dishonorably discharged in 1863. Walkup held many positions—teacher, operator of a butter and cheese factory, inventor, and businessman—and received patents for air brush improvements: Air Pump (US Patent 799,695), 1905; Air Brush (US Patent 817,819), 1905; and Air Brush (US Patent 1,191,751) in 1916. These improvements allowed a single trigger to control the air and paint. He married Phoebe C. Johnson, an artist, who would later establish the Illinois Art School in 1888 for teaching students the craft of using the air brush.

In 1891, the Air Brush Manufacturing Co. began issuing a quarterly magazine, the Air Brush Journal,devoted to the interests of airbrush artists. (Portrait and Biographical Record, page 51). The Air Brush Manufacturing Company advertised the tool as a way to improve designs, and save time and drudgery in cleaning up, asserting that an “outfit [company] is not complete without the Air Brush.” It also warned potential customers to beware of imitators, “The sharks are on the market with their inferior instruments. The only genuine is made at Rockford, Illinois.” (Bridges and Framed Structures, page 272).

One of Walkup’s competitors was Charles L. Burdick (1861-1949), an artist from Albion, Wisconsin, who patented two air brushes (US Patent 472,157 and US Patent 472,158) in 1892 and founded the Fountain Brush Company in London, which was later known as the Aerograph Company, to promote his air brush. Burdick’s air brush, which resembled a pencil or pen, was exhibited in the Manufacturing and Liberal Arts Building at the 1893 World’s Fair in Chicago by the Thayer and Chandler Art Supply Company.  Liberty Walkup’s Air Brush Manufacturing Company air brush was also on display at the World’s Fair.

Chicago became known for air brushes, with a concentration of key players and companies located in the city, including Olaus C. Wold (1861-1947), a Norwegian immigrant who worked for Thayer and Chandler, an arts and crafts supply company founded by Norwegian Henry Thayer and Englishman Charles Chandler in Chicago. Wold designed air brushes (US Patent 767,510) in 1901 and founded the Wold Air Brush Company; he later sold half of his interest in to Jens A. Paasche (1880-1969), a fellow Norwegian who founded Paasche Brothers in Chicago in 1904.

The crowded air brush business fostered competition that made it ripe for patent and trademark infringement. Walkup’s Air Brush Manufacturing Co. filed a trademark infringement case against competitor Thayer and Chandler Co., claiming trademark infringement for name “Air Brush.” The Illinois Circuit Court, however, decided that the name “air brush” was generic and, in the patent, indicates a class of articles. (Air Brush Mfg. Co. vs. Thayer, Federal Reporter 84, 1897, page 640). Liberty Walkup’s dominance waned, and his company dissolved. Wold, Paasche, and Thayer and Chandler were ready to fill the void. Today the air brush is still used in photography, the automotive industry, nail painting, and even tanning salons.

Researchers interested in trade literature will find many examples in Archives Center collections and the Smithsonian Libraries Trade Literature Collection housed at the National Museum of American History. 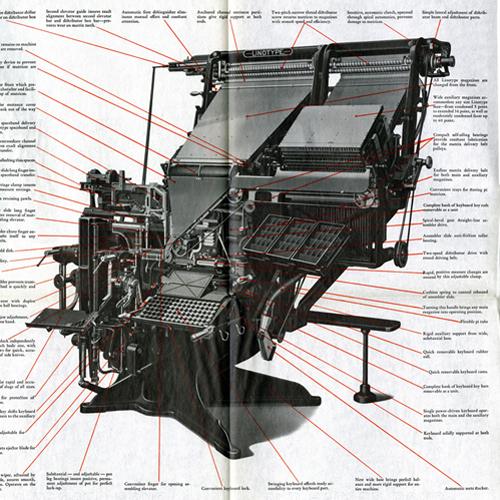 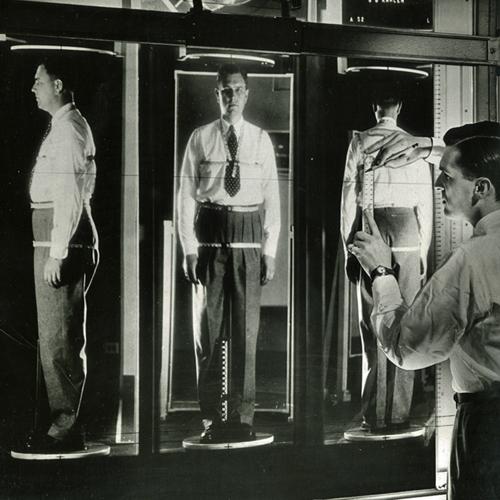 A camera, some mirrors, a projector, a screen, and a calculator combined for made-to-measure clothing tailored “PhotoMetriCally.”