Ukrainian-born artist and author, Boris Artzybasheff (1899–1965), was known primarily for his work as an illustrator, especially for children’s books, some of which included Verotchka’s Tales (1922); Gay-Neck, the Story of A Pigeon (1928); Three and the Moon: Legendary Stories of Brittany and Normandy Provence (1929), Poor Shaydullah (1931) and Seven Simeons: A Russian Tale (1937). But it was Artzybasheff’s work as an illustrator of magazine covers (especially for Fortune, Life, and Time) and advertisements for industrial machines and products in the 1940s that would make him well-known.

Born to playwright Mikhail Petrovich Artsybashev and Anna Vasilyevna Kobushko, the young Boris attended Prince Tenishev School in St. Petersburg where he studied art. It is alleged that he was drafted into the Ukrainian White Army (anti-communist), which was fighting for a separatist Ukrainian Republic. After defeat by the Red Army (pro-communist), Artzybasheff deserted. He arrived at Ellis Island, New York, knowing no one and penniless, on June 17, 1919, aboard the SS Vladimir, which was part of the Russian volunteer fleet. The SS Vladimir departed Novorsossiysk, a port city on the Black Sea and, according to the crew and passenger list, Artzybasheff signed on as “crew” and “pupil” in Odessa. He became a United States citizen around 1925 and married Elisabeth S. Snyder on February 19, 1930.

After working as an illustrator of children’s books, an engraver, a painter, and even as a set designer, he pivoted in the late 1930s and early 1940s to exclusively producing illustrations for magazines, and his art began to focus on the machine age. The postwar years saw an increase in the consumption of goods by the American middle class, and Artzybasheff illustrated many of those products. Companies were creating appliances, engines, rockets, televisions, and computers, to name a few, for sometimes technophobic consumers, and Artzybasheff’s art was just the vehicle to introduce and explain it.

Endowing machines with human characteristics (anthropomorphizing,) was a common theme in his work. He created advertisements for companies such as Shell Oil, Avco, American Airlines, Union Carbide and Carbon Corporation, and Parke Davis and Company. The ads depicted technological and industrial products as strong and reliable, and gave them lifelike qualities that made them easier to relate to and understand, which presumably enhanced sales. “From 1945 onwards, Artzybasheff employed his unique and grotesque anthropomorphic style primarily for commercial and advertising work.” (Patsiaouras)

His anthropomorphized jeep, featuring a Lycoming engine, appeared in Fortune magazine in 1952. With its powerful legs, tentacle like arms, and long, sinewy, electrified fingers, the character suggests that the engine in the jeep could tackle any terrain and go anywhere, anytime. The expressive eyes soften the engine technology, giving it a playful feel. “When Lycoming incorporated pioneering tough gears into a new series of tractors, Artzybasheff added eyes, a mouth and two steel-made wrists to the machine to personify strength and durability.” (Patsiaouras) Artzybasheff liked exploring how machines worked and what human task the machine was replicating. In his 1954 book, As I See, Artzybasheef wrote, “I am thrilled by machinery’s force, precision and willingness to work at any task, no matter how arduous or monotonous it may be. I like machines." (Williams)

While Artzybasheff’s main focus was advertisements related to machinery, he also dipped into the world of maps, geography, and psychological warfare, working for the US State Department. In this 1944 Life map, he depicts tropical diseases afflicting the world. One can only imagine how he would have depicted the COVID-19 virus afflicting our world today. 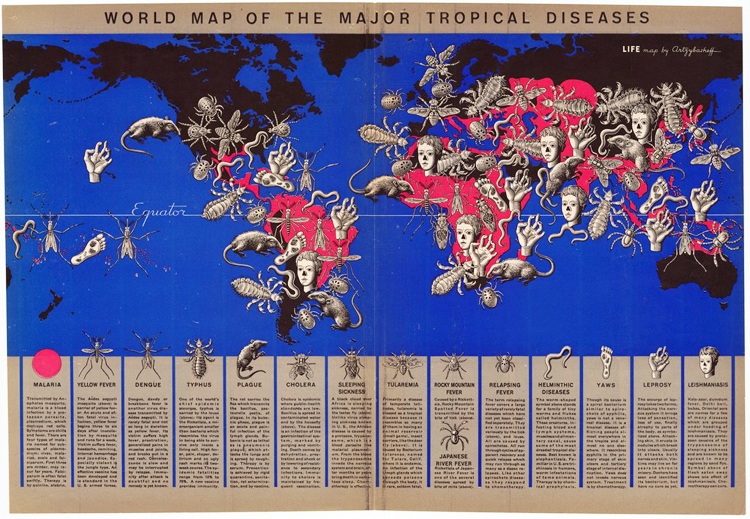 “World Map of the Major Tropical Diseases,” by Boris Artzybasheff, published in Life, May 1, 1944. Courtesy of Artstor

The Archives Center does not hold Boris Artzybasheff’s archival materials. The Lycoming engine advertisement was found while slowly browsing in the Warshaw Collection of Business Americana, Series: Machinery. Machinery forms just one part of a vast collection of ephemera, trade literature and other printed materials assembled by Isadore Warshaw, a New York City bookseller. To learn more about the Warshaw Collection and our advertising collections, visit the Archives Center.