During World War I, Belgian-American inventor Leo Baekeland donated to the Committee for the Relief of Belgium, which fed and cared for these children and other refugees. LC-A6196-3354, around 1916-1918, courtesy American National Red Cross Photograph Collection, Prints and Photographs Division, Library of Congress, Washington, DC

Leo H. Baekeland (1863-1944) was a Belgian-American industrial chemist and inventor, best known for two inventions, Velox photographic paper and Bakelite, the first synthetic plastic. Baekeland was born near Ghent and earned a doctorate in chemistry at the local university in 1884. After winning a research competition, he used the prize money to immigrate to the United States in 1889. In the midst of World War I, Baekeland was naturalized as a US citizen on December 16, 1919.

Baekeland was financially successful. In 1899, Baekeland and his partners sold the Nepera Chemical Company and its Velox patents to Eastman Kodak for $750,000; Baekeland’s personal take was $215,000 (equivalent to $6.42 million in 2016 dollars). Later as Bakelite grew in popularity and became “the material of 1000 uses,” Baekeland amassed a sizeable fortune. In 1939, Baekeland sold General Bakelite to Union Carbide for $16.5 million in Carbide stock (equivalent to $285 million in 2016 dollars).

Baekeland’s life as a Belgian-American immigrant influenced his charitable and service activities. For example, Baekeland was particularly troubled by World War I and the devastation of his native Belgium. Altogether, the German armies killed 6,000 Belgians, destroyed 25,000 buildings, and committed numerous atrocities; approximately 1.5 million Belgians (20% of the population) fled as refugees. In 1916, Baekeland made some modest donations for Belgian Relief. For example, he and his wife gave $20 to join the Yonkers chapter of the American Red Cross. He also gave $100 to the Allied Bazaar, a group dedicated to the “relief of the Blinded, Starving, and Homeless,” working in concert with agencies like the National Allied Relief Committee, the War Relief Clearing House, and the Commission for Relief in Belgium.

Baekeland continued to contribute to Belgian relief after the 1918 armistice. One of the more notable wartime atrocities was the deliberate burning of the library at the University of Louvain, resulting in the loss of 300,000 precious medieval books and manuscripts. In 1924, Baekeland contributed $400 to the National Committee of the United States for the Restoration of the University of Louvain. Although it is unclear whether he contributed financially, Baekeland’s files also contain correspondence from several Belgian-American service organizations, including Friends of Belgium, the Belgian Chamber of Commerce in the United States, the Belgian Institute, and the Belgian War Veterans of America.

Finally, Baekeland invested in international educational exchanges as a form of post-war reconciliation. For example, in 1929, Baekeland pledged to donate $100 per year for the next ten years to the Institute of International Education to underwrite fellowships for international exchange students. In 1935, Baekeland joined the CRB Educational Foundation, which built upon monies remaining from the original Committee for the Relief of Belgium to support exchanges of Belgian and American graduate students and postdocs. Altogether, much of Baekeland’s charitable and service work reflected his identity as a Belgian-American inventor.

Similarly, Károly “Charles” Eisler (1884-1973) was a Hungarian-American engineer who parlayed his financial success into generosity for his native community. Eisler was born outside Budapest and apprenticed as a mechanical engineer in several factories in Hungary and Germany before immigrating to the United States in 1904. As a journeyman engineer, Eisler worked at Westinghouse in East Pittsburgh, PA; Bausch and Lomb in Rochester, NY; and the Metzger Motor Car Co. in Detroit, MI. Along the way, he was naturalized as an American citizen on June 6, 1910.

In 1920, Eisler founded his own business in Newark, New Jersey. The Eisler Engineering Company built and sold the patented machine tools that automated the production of incandescent light bulbs and radio tubes. Eisler rode the explosive growth of those two industries during the 1920s and his machine tool business grew rapidly. In 1930, Eisler sold a 49% stake in his firm to a New York investor for $750,000 (equivalent to $10.8 million in 2016 dollars). He would add to his fortune as the Eisler Engineering Company continued to prosper over the next several decades.

Like many successful immigrants, Eisler sent money, clothes, and food back to his parents and siblings in Hungary, and he gave one brother a job at his Newark factory. Eisler was also the key patron for the Hungarian immigrant community of northern New Jersey. For example, in 1930, Eisler founded the Newarki Hirlap, a weekly Hungarian language newspaper with a readership of about 3,000 subscribers. Though it operated at a loss, Eisler financially sustained the paper for more than 25 years. Eisler also made donations and took leadership positions in numerous Hungarian-American churches and local community chests, such as the American-Hungarian Institute and the Magyar Reformed Church.

Eisler’s service and charitable activities intensified during World War II. It was common for Americans to question the loyalty of Eastern European immigrants, especially those, like Hungarians, whose home countries had joined the Axis powers. In 1943, in a display of wartime patriotism, Eisler led Newark’s Hungarian community in raising enough money to donate two ambulances to the US Army. The donation ceremony, on the steps of Newark’s City Hall, had a distinctly Hungarian feel, featuring clergy from various Hungarian churches and ladies dressed in traditional peasant costumes.

Eisler continued to support what remained of his extended family during the chaotic period following World War II. Five of Eisler’s eight siblings had been executed by the Nazis when they occupied Hungary, leaving dozens of orphaned nieces and nephews. He personally sent small cash gifts and care packages to these struggling relatives, and paid the passage of a few, like his cousin Alexander Grunberger, who left a displaced persons camp in Germany to come to the United States.

Eisler’s generosity continued throughout the Cold War. In 1956, the Soviet Union squashed the brief Hungarian Revolution, displacing some 200,000 refugees. Under “Operation Mercy,” the US Army airlifted thousands of Hungarian refugees into the United States, many of whom stayed at Camp Kilmer in nearby Edison, NJ. In November 1956, Eisler founded an organization called “Help Suffering Hungarians” that helped resettle and provide basic necessities for the shell-shocked Hungarians arriving in the United States. Eisler even wrote to Camp Kilmer’s commander on behalf of his daughter Martha; she spoke fluent Hungarian and offered to resettle a young Hungarian woman in her own home. Altogether, Eisler’s charitable and service work reflected his identity as a proud Hungarian-American.

Inventors, like all human beings, have lives beyond the workbench. They have origin stories and families; they live through triumphs and tragedies; they experience love and loss. Leaving one’s homeland for a new adopted country is a profoundly transformational experience, one that was deeply influential for both Baekeland and Eisler. As their stories suggest, immigrant inventors embraced their new identities as American citizens, but they always retained an affection and spirit of generosity for their native lands.

A series of photographs marking the donation of two ambulances to the US Army by the Hungarian-American community of Newark, New Jersey on 25 July 1943. Left: Charles Eisler introducing Major General Herbert Hargreaves at the podium, with a young girl in the foreground; Center: Women in traditional Hungarian costume on the steps of City Hall; Right: Eisler presenting the ambulance donation on behalf of Newark’s Hungarian-American community. From Eisler, The Million Dollar Bend (New York: William-Frederick Press, 1960), p. 242.

This blog post is drawn from Eric S. Hintz, “Rugged Altruism: Philanthropy Among American Immigrant-Inventors and Entrepreneurs,” presented at Immigration and Entrepreneurship: An Interdisciplinary Conference, co-sponsored by the German Historical Institute and the University of Maryland, College Park, MD, September 2012.

Charles Eisler, The Million Dollar Bend: The Autobiography of the Benefactor of the Radio Tube and Lamp Industry (New York: William-Frederick Press, 1960).

Paul Lendvai, One Day That Shook the Communist World: The 1956 Hungarian Uprising and Its Legacy (Princeton, NJ: Princeton University Press, 2008).

Samuel H. Williamson, "Seven Ways to Compute the Relative Value of a U.S. Dollar Amount, 1774 to present," Measuring Worth, 2017, at http://www.measuringworth.com/uscompare/, viewed 2 October 2017. 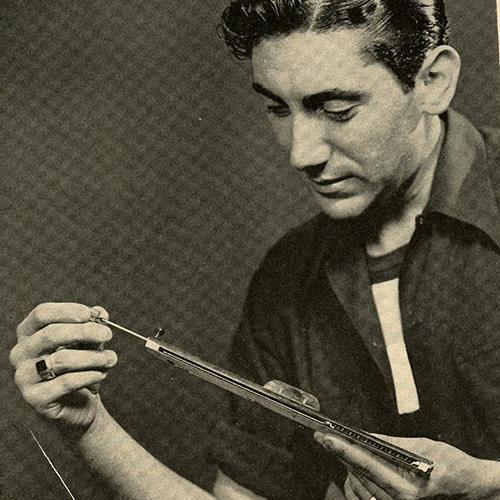