As the Lemelson Center continues to develop Game Changers, its exhibition that looks at invention and innovation through the lens of sports, one invention that continues to fascinate is the Speedo LZR Racer. This sleek one-piece was hailed when it debuted in 2008 as “the most technically advanced swimsuit in the world.” Having enlisted the help of kinesthesiologists, computational fluid dynamics engineers, aerospace engineers, swimming biomechanists, sports textile manufacturers, and world-class swimmers in the creation of the full body compressive suit, Speedo initially received accolades for its ingenious design. Praise for the invention, however, would be short-lived.

The science and technology behind the LZR Racer (pronounced “laser”) was impressive. Building on years of in-depth research and development, as well as some rule bending—Speedo took liberty with the loosely defined requirement that competitive swimsuits be made entirely of “fabric”—resulted in a revolutionary garment. Starting with ultra-lightweight, water-resistant, quick-dry compressive fabric, Speedo added thin laminated panels of rigid polyurethane to parts of the torso, abdomen, and lower back—areas that generate high amounts of drag. The goal of combining textile and non-textile panels was to insulate and compress swimmers’ bodies. Improving buoyancy and hydrodynamics would make swimming easier and help athletes go faster.

Here’s how it worked: inflexible, girdle-like polyurethane panels positioned in the lower back and abdomen helped improve posture, repelled water, and trapped air, helping athletes be more buoyant in the water. Compressive panels at the buttocks and breasts streamlined swimmers’ bodies, further reducing drag. Additionally, the compression simultaneously increased oxygen flow and lessened muscle vibration, a primary contributor to power loss and fatigue in swimmers. To further decrease drag, Speedo used sound waves to weld the various pieces of the suit together. With muscles and body parts compressed and aligned in the water, athletes would encounter less resistance and have more energy, enabling them to swim faster.

“Built for Speed” infographic by Speedo, highlighting the innovative technology of the LZR Racer. Courtesy of Speedo

At first, reaction to the LZR Racer was positive. That is, positive for the elite athletes with the means and access to the suit. Swimming phenomenon Michael Phelps gushed, “When I hit the water, I feel like a rocket. . . . [The LZR Racer] is going to take the sport of swimming to a new level.” Others exclaimed that wearing the suit made them feel “like a knife slicing through butter” or “as if I’m swimming downhill.” Comments like these, combined with the plethora of world and Olympic records and personal best times set in quick succession by athletes wearing the performance-enhancing suit, immediately aroused suspicion. Accusations flew that wearing the LZR Racer amounted to “technological doping.”1

Interestingly, Speedo’s latest suit was not immediately banned. FINA, swimming’s international governing body, had adopted a laissez-faire approach to swimwear, and full-body tech suits had been permissible in competition for nearly a decade. While Speedo suits prior to the LZR Racer had raised controversy, with critics questioning whether they were clothing or high-tech equipment, their impact on swimming was subject to debate. The company’s marketers made audacious claims about its swimwear, but independent studies generally found only moderate performance benefit to wearing the suits. However, FINA believed the tech suits helped raise the public profile of competitive swimming and were beneficial to the sport.

Critics contended that the suits offered several unfair advantages to the competitors who had access to them. First, they argued that the technology of the LZR Racer was actually a piece of performance-enhancing equipment in violation of FINA rules. Second, not everyone had access to the suits; initially, they were available exclusively to Speedo-endorsed elite teams. Finally, with a cost of $550 for a suit that was so fragile it only lasted for a few wears, the LZR Racer created an unlevel playing field between the haves and have-nots, especially disadvantaging elite competitors from poorer countries.

Given FINA’s inaction, the International Olympic Committee (IOC) tried to address the problem the LZR Racer posed by allowing the suit only if Speedo made it available to all competitors. This presented a catch-22 for athletes with the means: wear the LZR Racer and potentially be seen as a cheater, or not wear one and lose a competitive edge. With the quid pro quo of corporate sponsorships upended, most swimmers not sponsored by Speedo—and who could afford to—broke their sponsorship contracts and paid fines in order to compete in the LZR Racer. Unfortunately, the IOC did not resolve the broader economic and technological disparities caused by the suit that were jeopardizing the integrity of the sport. Early results of swimmers racing in the suit forecast atypical results at the upcoming Olympics. 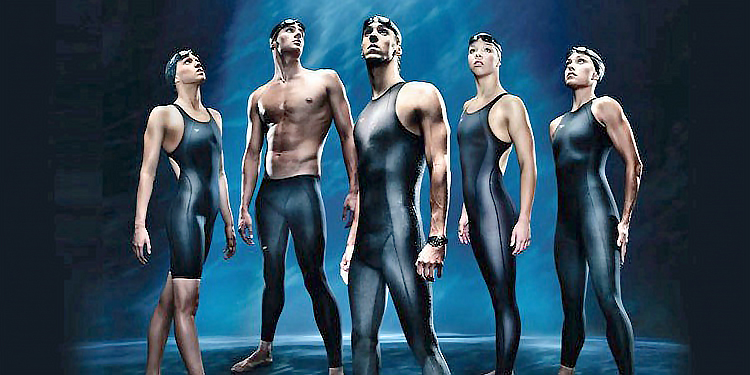 X-Men-inspired advertisement for the LZR Racer, featuring Michael Phelps and other Speedo-sponsored American swimmers as superheroes with preternatural athletic abilities. Courtesy of Speedo

At the Olympics, an astounding twenty-five world records were broken, and Speedo claimed that ninety-two percent of the medals were won by athletes wearing the LZR Racer. The upshot: other swimwear companies such as Arena and Jaked took a “more is more” approach and quickly developed suits fully coated with polyurethane. Between February 2008 when the LZR Racer was introduced and the World Championships held in July 2009, an unprecedented 140 world records fell to swimmers wearing the full-body “rubber suits.”

Whereas the LZR Racer dominated the 2008 Olympics, at the World Championships the following year, the all-polyurethane full-body Jaked J01 and the Arena Powerskin X-Glide ruled. Speedo’s partial polyurethane suit by then was “the swimming equivalent of a jockey racing with extra weight.”2

Even before the World Championships were over, it had become abundantly clear that damage to the sport had been done; the game-changing suits had diminished elite swimming. Olympic and world records that had previously been the result of a swimmer’s athletic prowess and hard work were now attributed to the suit. 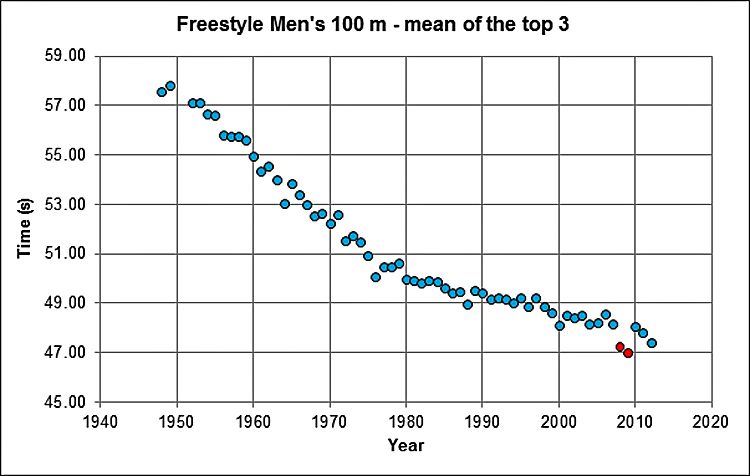 Graph showing the drop in time of one swim event to highlight the dramatic impact of the LZR Racer and full-body polyurethane suits in 2008 and 2009. Courtesy of Leon Foster

Pending antitrust lawsuits by rivals of Speedo, growing criticism within the swimming community that the sport was mired in its own kind of doping scandal; public outcry that the LZR Racer and similar full-body polyurethane suits dehumanized swimmers’ bodies; and the threat that Speedo-sponsored Phelps, the most decorated Olympian to date, would boycott the sport, finally forced FINA to act. Before the 2009 World Championships had even ended, the swimming governing body banned the full-body polyurethane suits, effective January 2010. FINA deemed that races won with the LZR Racer and other tech suits be noted—but nonetheless allowed to stand—in the record books, a decision that remains unsatisfying to many.

Since the ban, world records continue to be broken, but at a more moderate pace. At the 2012 Olympics, nine world records were broken and eight at the 2016 Olympics, on par with the rate before the era of the high-tech suits. This has generally been interpreted as a positive sign for competitive swimming. It signifies a return to the norm, in which incremental advances in swimwear technology as well as other inventions and innovations, such as in pool design or in an athlete’s training regimen, contribute to a more gradual evolution of the sport. 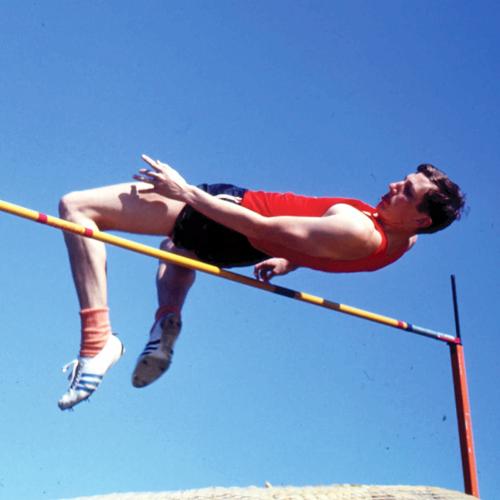 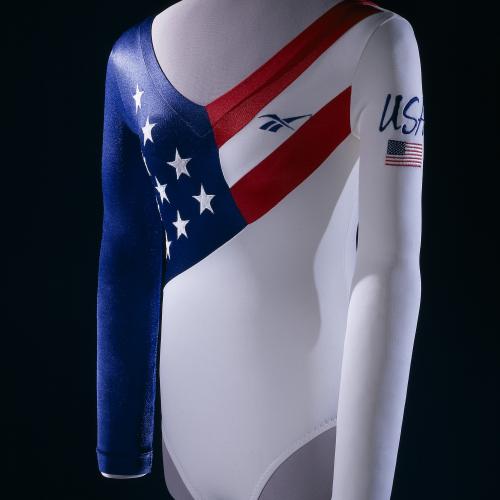 The unsung heroes behind the 2016 Summer Olympics are the scientists and engineers whose inventions and innovations help these athletes strive toward the Olympic motto of “Faster, Higher, Stronger.”