A thirsty bull gets to drink. Courtesy of Library of Topkapi Palace Museum, Istanbul, manuscript A.3474, model 6.

Fountains, perpetual oil lamps, and other inventions from the Islamic “Golden Age”

Historians, economists, and others interested in invention and innovation often use patents as primary sources. In fact, for the majority of inventors throughout history, we have few or no other records of their lives, thought processes, or motivations. Histories of intellectual property systems typically start with patent laws enacted in 15th century Venice, jump to British patents granted under the 1624 Statute of Monopolies, and then turn to the 1787 US Constitution, which included a clause widely seen as democratizing access to patenting. Over time, these statutes overcame the alternative approach of keeping new technologies as trade secrets, often under narrow guild control.

But telling the history of invention in this way has a strong European and North American bias. Looking farther back at a collection of inventions from 9th century Baghdad, published in 850 as the Kitab al-Hiyal (the Book of Ingenious Devices), offers intriguing perspective on how inventors describe and disclose their work.

In the Kitab al-Hiyal, three brothers—Muhammad, Ahmad, and al-Hasan bin Musa ibn Shakir, known as the Banu Musa (“sons of Moses”)—describe some 100 devices. Sons of a respected astronomer, the brothers were supported by Baghdad’s ruler al-Mamun and his successors. Among their other notable projects was an initiative to measure the circumference of the earth, accomplished by walking the distance on a marked route for a one-degree shift in altitude of the Pole Star (which they did at two locations for accuracy). They reported a circumference of 24,000 miles, only slightly less than the modern figure of 24,902 miles. Individually and together, they also published noted treatises on geometry and mathematics, timekeeping, the nature of speech, and other topics.

Written during a period characterized as a “golden age” of Islamic science, engineering, and medical discovery, along with linguistic, philosophical, and cultural advances, the Kitab al-Hiyal differs from scientific manuscripts of the era in its descriptions of useful and practical technologies. The term, “Islamic Golden Age” is of uncertain origin, but has been used widely since scholarship in the 1970s criticized longstanding Western perceptions of the Middle East and Asia as primitive or unscientific.

The Kitab al-Hiyal includes modifications to devices that were described in older Greek and Roman manuscripts as well as descriptions of new technologies invented by the three brothers. In a break from previous texts, however, the descriptions throughout focus on mechanics and engineering, rather than theory and epistemology. The majority of the inventions fall into a few broad categories: jars and jugs for storing and dispensing liquids, fountains that create a variety of shapes, and oil lamps. The underlying technological advances include pneumatics, automatic controls (relying on variations in aerostatic and hydrostatic pressure), water-powered cranks, self-operating valves, timing and delay systems, and conical valves that served as in-line controllers of water or oil flow. Other inventions in the collection include tools for grabbing objects at a distance and a bellows and piping system for working underground in wells with poisonous air.

Eighty-seven of the hundred devices offer jars, basins, pitchers, and other containers used to store and discharge liquids. The designs varied, ranging from entertaining dioramas of mechanical animals drinking from troughs to pitchers that kept hot and cold water for ritual washings separate (but allowed their mixing if poured correctly) to vessels with internal systems that could boil water. 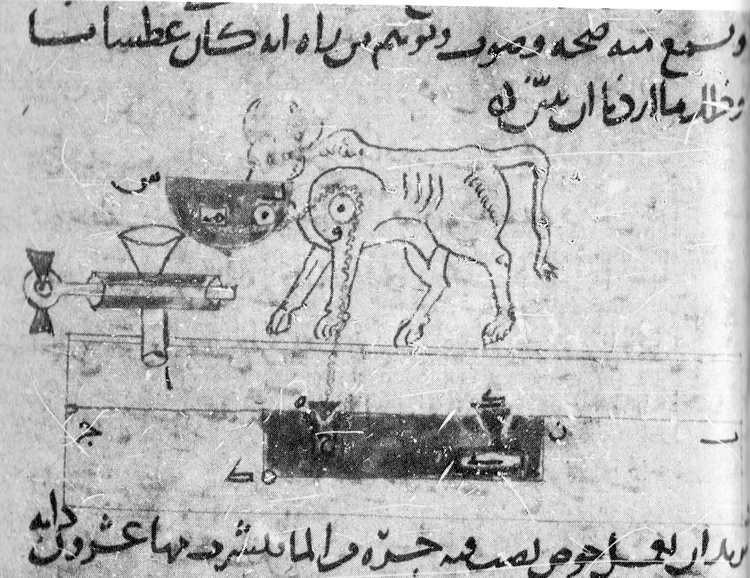 A thirsty bull gets to drink. Courtesy of Library of Topkapi Palace Museum, Istanbul, manuscript A.3474, model 6.

For example, one device featured a mechanical bull (the size is not given) that made a sound as if thirsty, and then moved to a trough with water that it consumed through its mouth. The device relied on a combination of gravity-fed water and a pulley in the bull’s mouth connected to a chain linked to a float. 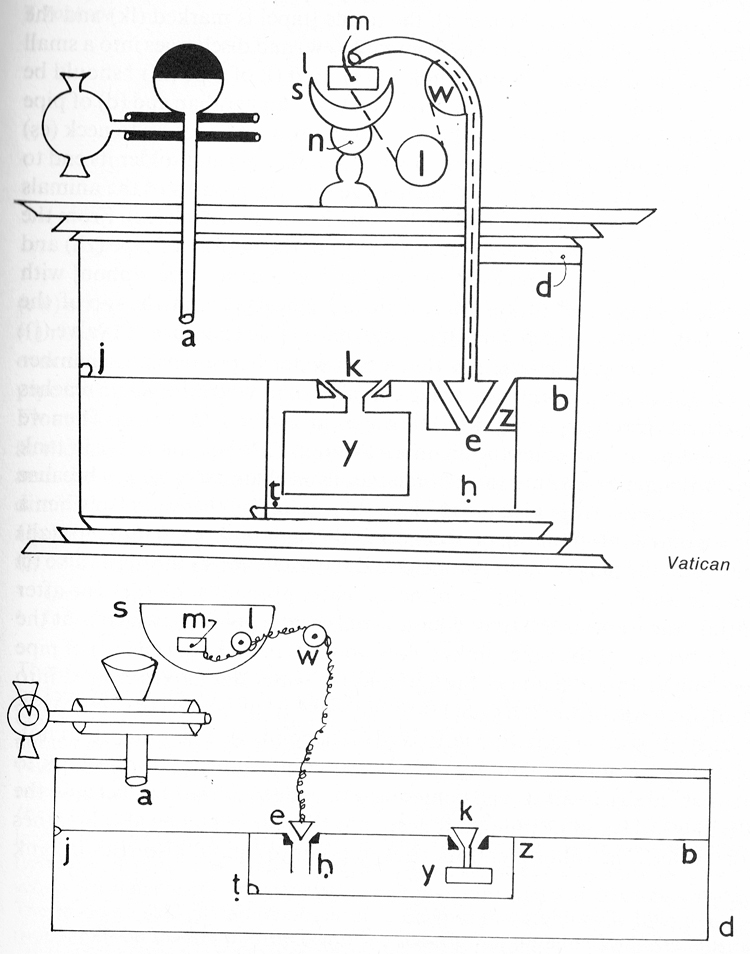 How a thirsty bull gets to drink. From D. Hill, The Book of Ingenious Devices, model 6.

As the bull draws water into its mouth, the float rises, and the water flows through the bull’s leg into a tank underneath the bull. Set up as a vacuum, the descending water draws additional water up into the trough. In addition, the water runs over a “sort of staircase” making the noise of a thirsty bull.

A second set of inventions describes fountains, some powered through gravity-fed water pressure and others through vaned wheels turned by wind. For example, one wind-powered fountain could spout water either in the shape of a lily-of-the-valley or like a lance. As the wind turns the vane, a central shaft with a water tank rotates. Water discharged from an outlet in the rotating tank flows into one of two containers that feed the two different fountain shapes. As a backup system in case there was no wind, a gravity-fed pipe discharged water onto the vaned wheel, keeping the fountain going. Other fountains created cones and shields of water, along with the lance and lily-of-the-valley shapes.

Four of the inventions offered lamps that could refill oil as it was consumed, extend the wick as it burned, both refill the oil and extend the wick, or protect the flame from wind. The lamp combining a moveable wick and automatically refillable oil relied on a sophisticated set of chambers and a toothed rod that advanced the wick. 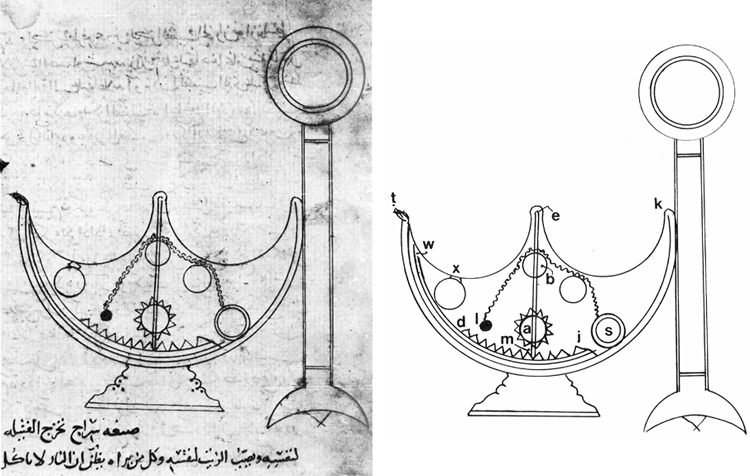 Depicted as a “bird” at the top, the invention description states: “The bird’s beak should be above the hole (f) in the lamp so that when the oil flows through pipe (ae) it discharges into hole (f) and enters the lamp.” As the wick burns down and the oil in the reservoir is reduced, “float (t) sinks, pulling the chain, weight (s) rises, pulley (k) and toothed wheel (y) rotate, the rod to which we attached the wick moves in the direction of mark (x) and the wick therefore emerges.”

Overall, the Kitab al-Hiyal describes inventions through language that specifies how each technology is constructed, its method of operation and use, and indications of novelty. Each of the inventions is accompanied by labeled illustrations of the specific mechanical elements and descriptions of how they work individually and together. All of them end with the statement, “And that is what we wished to explain,” suggesting the goal was to share information about the mechanical breakthroughs with others.

In recent years, the Banu Musa’s inventions have been reanalyzed by mechanical and hydrology engineers, who in some cases developed detailed models and digital simulations of the fountains. Several of the technologies were featured as part of a traveling exhibition and educational program, 1001 Inventions (https://www.1001inventions.com). They also have been featured in a variety of educational materials, ranging from engineering texts to children’s books.

Although the Banu Musa's involvement in Baghdad’s turbulent politics are documented by court records, we have little additional information about the three inventive brothers—their inspirations, challenges they had to overcome, and if or how they sold their devices (all the more reason today’s inventors should keep good records). But I like to think they would be honored to learn that their intricate, ingenious, and useful inventions from the 9th century continue to inspire young people today. 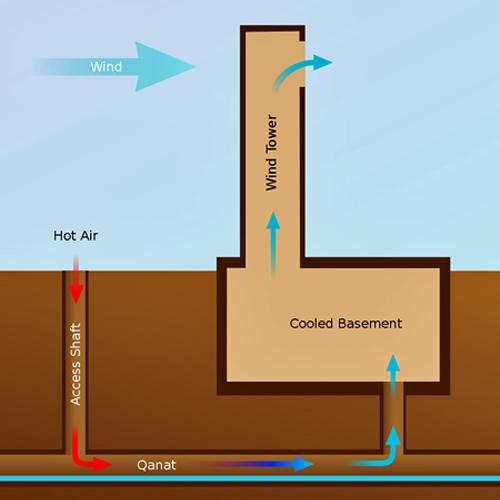 Notes from the Director: Back to the Eco-Future!

So many of the sustainable environmental technologies of today hold promise but are distinctly futuristic--from nanotechnology-based photovoltaics and engineered biofuels to a full-blown vision of the hydrogen economy.