Nineteenth-century advertisements that transform before your very eyes!

Advertising trade cards are small cards given by businesses to potential clients and consumers. They entered the advertising scene in the seventeenth century in Europe and became very popular during the nineteenth century in America. The growth of domestic products and the desire to advertise them led to widespread printing and distribution of trade cards.

Technological improvements (especially with printing presses) in color lithography from innovators such as Cottrell & Sons and Richard M. Hoe in New York and the Babcock Company in New London, Connecticut allowed the trade card industry to flourish. Calvert B. Cottrell (US 175,036, printing press and US 172,974, printing press); Nathan Babcock (US 208,359, gripper motion for printing-machines); and Richard M. Hoe (US 24,875, for printing on both sides of a sheet), made several significant contributions to printing which were widely adopted.  Mechanization of color lithographs allowed for trade cards to be created quickly, cheaply, and in large quantities for wide circulation. Trade cards were distributed primarily in product packaging and by travelling salesman. Companies often circulated cards with different images and slogans which prompted many people to collect them.

The large American firms of Mayer, Merkel & Ottmann, New York; Donaldson Brothers, New York; Bufford & Sons, Boston and New York; and Louis Prang, Boston, helped propel trade cards into the hands of consumers. Advertising clothing, patent medicines, foods, and more, the majority of trade cards consisted of a single card with an image printed on one side and the name and address of a business or manufacturer on the other side.

While most businesses used a single image on the card, some cards used one or more folding parts to produce a change in the card's image. Known as metamorphic, the card changed form, altering or repositioning parts of the image and message.  These cards were innovative for their creative designs and use of subjects and text, often times humorous, to convey a message. As seen in this trade card from J. & P. Coats, thread manufacturer, the “skilful” fisherman struggles to catch a fish and when unfolded we see he succeeds when using J. & P. Coats cotton spool thread as his fishing line. A 1879-1880 calendar advertising J. & P. spool cotton is on the back.

Some trade cards changed by rotating or flipping a card such as this 1888 card featuring the question of the day, “Is marriage a failure?” This trade card does not show the effect of using the advertised product, but rather features an advertisement for Frank’s Railway and Steamship of New York City on the reverse.

Other trade cards consisted of puzzles, pictograms (symbols and letters combined), hidden images, and riddles. This card advertising Snuffene, a remedy for hay fever made by Cook Chemical Company of Casper, Wyoming, asks the card holder to look at the mouth of the Punch while repeating the magic word “snuffene” loudly and slowly. Shortly thereafter, Punch will appear life size.  It’s highly unlikely that Punch appeared or that one found relief from hay fever. 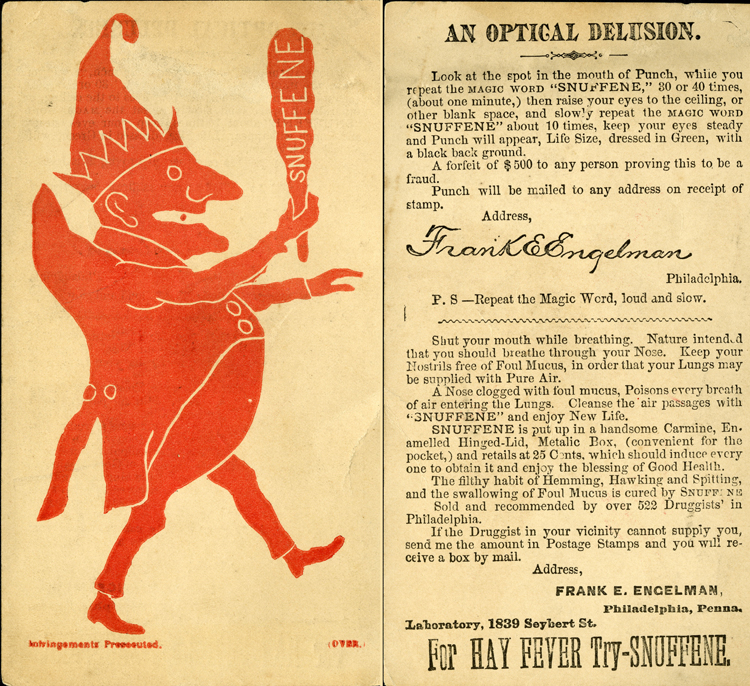 To learn more about trade cards in the Warshaw Collection of Business Americana, visit the Archives Center.