When Ann Moore was a Peace Corps nurse in Togo, West Africa, in the 1960s, she was intrigued by the way African mothers carried their babies in fabric slings tied to their backs. "The babies were so calm because they felt secure and close to their mothers," says Moore. "So when I came home and had my first baby, I wanted so much to carry my daughter the way I had seen the African babies being carried."

Moore's experience in Africa was the first step in a journey that led her to invent the original soft baby carrier--the Snugli®--as well as other kinds of specialized carrying cases. Ann and her husband Mike, who was an English teacher in the Peace Corps, recounted their invention story at an Innovative Lives program at the Smithsonian's National Museum of African Art in October 1999.

Ann and Mike encouraged the students to think of themselves as inventive people. "How many times have you repaired something that is broken? Had to figure out a way to repair it?" asked Ann. "Now I think that's kind of being an inventor because you had to solve a problem and figure out a way to fix it. You're on your way already to being inventors." 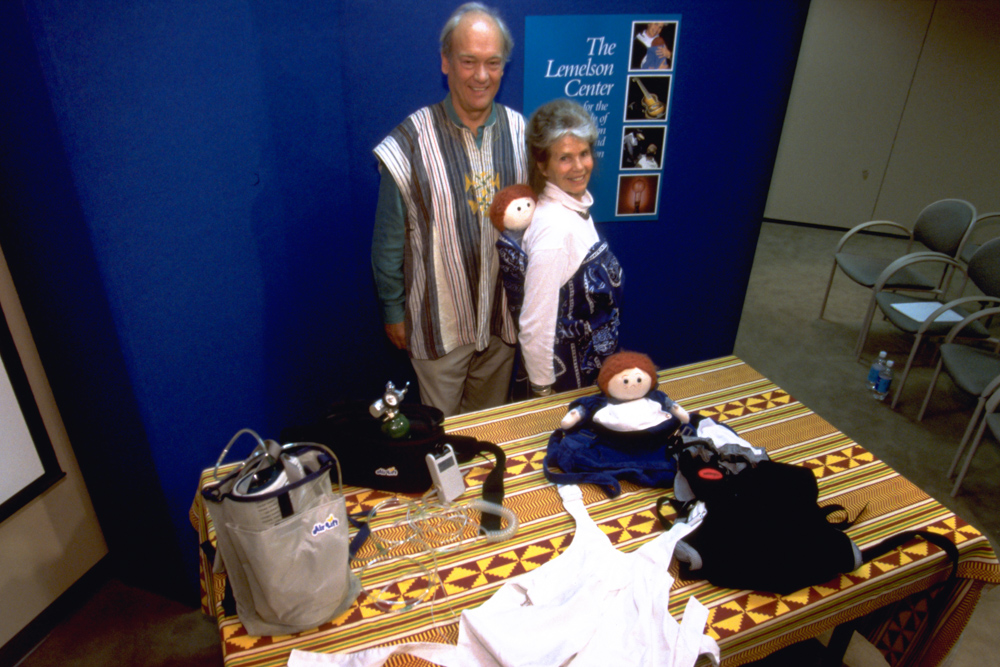 Ann and Mike Moore pose with their inventions during a 1999 Innovative Lives presentation at the National Museum of American History. Smithsonian Institution photo.

Moore said her inventive spirit could be traced back to her childhood when she would create simple dolls and toys. She grew up on a farm in Ohio, raised by parents who belonged to the Dunkard Church. The Dunkards practice a faith similar to the Amish and other "plain clothes people." Early on, she learned about the importance of community, thinking in innovative ways, and drawing upon limited resources to create new things. These were skills that would serve her well as a nurse in developing countries.

"I knew from the time I was a little girl I wanted to be a nurse," says Moore. "Back in those days, women became nurses or teachers and now there are lots of options. But I never had to struggle with what I wanted to do when I grew up."

Moore specialized in pediatric nursing and taught at Columbia University's Babies Hospital in New York. Soon after, she worked in Germany with refugees from Eastern Europe, and then in an international work camp in Morocco, aiding victims of an earthquake. When she first heard about the Peace Corps, she jumped at the chance to join, believing this program would help people see others as "part of the same human family." She was the 33rd person to volunteer.

While Ann was in French language training, she fell in love with her teacher, Mike Moore. They were married eight weeks later and soon began their work together in Togo. That was just the beginning of the adventure. Their partnership has included experiences such as participating in the Civil Rights movement, supporting Mike's career as the director of a Community Action Agency in the War on Poverty, raising three daughters, singing together professionally, and founding Air Lift®, a company that makes soft-sided carriers for oxygen canisters and high-tech instruments. In their business partnership, Mike takes care of marketing and sales, and Ann creates and refines the products. "We really complement each other," says Ann. "We love working together and it comes very naturally."

Moore, who taught nutrition courses in Togo, says she learned as much from the African mothers as they learned from her. "For thousands of years, women around the world have carried their babies close to them," says Moore. "But in America it was considered a radical idea at first. Now we call it 'bonding.' And studies show that babies who are held close to their mothers develop language skills more quickly and are more self-confident.

"In Africa, mothers stay at the hospital to be with their sick babies and it is so comforting to them," says Moore. "Later on, American hospitals accepted this idea and called it 'rooming in.' So in many ways those developing countries are way ahead of us in terms of 'human-ness.'"

Soon after Mike and Ann returned to America, their daughter Mandela--named after the South African leader Nelson Mandela--was born. When Ann left the hospital, she tied her daughter to her back in the African way, but found that the baby kept slipping. Moore asked her mother, Lucy Auckerman, to help her sew a simple backpack for her new daughter. With Mande strapped to her back, Moore was able to ride her bicycle, run errands, and cook--all while staying close to her daughter. Everywhere they went, people stopped to comment on what was then considered a radical idea.

"Some people warned us that we would spoil our baby," says Moore. "But I thought that the more you satisfy a baby's needs in the first year of life, the more they'll grow up to feel secure and loved. And then they would become loving people when they grew up. So it became a mission for us."

Soon, dozens of people were asking where they could buy a baby carrier like Ann's. The Moores did not advertise the product, but news of the carrier spread by word of mouth. Ann's mother continued sewing them in Ohio and within a few years, she hired dozens of women from local farms to help her keep up with orders.

Over time, Moore came up with refinements for the pack. She added leg holes and extra padding. She put in tucks and darts so it could be enlarged as the baby grew. She added adjustable straps, an inner pouch to support the baby's head, and numerous other revisions, and named the baby carrier "Snugli." Moore's invention earned a patent in 1969.

The timing could not have been better. Natural childbirth and breast feeding were becoming popular. The La Leche League International (women who advocate breast feeding) began selling the product to their members. When the Moores attended a La Leche convention in 1968, they found that delegates were carrying their babies in Snuglis on their chests. They complained that the shoulder straps fell off whenever they leaned forward. The Moores then added 18 inches to the shoulder straps so that they could be crossed-over in back when parents used the Snugli® to carry babies on their chests.

In 1966, the Moores were surprised to learn that the Whole Earth Catalogue published an advertisement for the Snugli®. In 1976, a consumer report called it "the soft baby carrier to have." And soon after, the Wall Street Journal carried a front-page story on the product. The Snugli® baby carrier had become a part of American culture.

"This invention was based on an ancient concept, but at the same time it was radically different," says Moore. "This was a westernized version that fit our culture."

In 1985, Ann and Mike sold their rights to the Snugli® to Gerry Baby Products, part of the Huffy Corporation (later purchased by Evenflo). The Moores said the company decided to market the product to large discount retail stores and cheapened the Snugli® for mass manufacture. "We were shocked and disappointed," says Ann. "They completely changed the design and took out a lot of important features. It wasn't at all what we had invented."

Their disappointment with the changes--and the arrival of grandchildren 12 years later--led them to create a new soft baby carrier, the Weego™, which was introduced in October 1999. "So many people asked us where they could get an original Snugli® that we said, maybe the time is right to bring a modernized version of the '60s Snugli® into the market place."

The Weego™ features adjustable shoulder straps, a washable bib, an inner and outer pouch, and snaps. Adjustable webbing and buckles replace tucks and darts that were sewn in the original Snugli®. "Nobody knows how to use tucks and darts anymore," laughs Ann.

In 1986, at the request of a respiratory therapist, Ann began designing backpacks and fanny packs for carrying liquid oxygen cylinders. The packs feature mesh and air holes to safely carry the cylinders, which contain highly-flammable liquid. The packs make it possible for oxygen-dependent people to carry their oxygen more easily--and thus allow them to walk, hike, garden, and live much more active lives.

More recently, Moore has begun inventing carrying cases for medical and high-tech instruments. She recently designed a spectrometer case for Hewlett Packard's microwave division. "People are parachuted into rough terrain, carrying these cases with measuring devices on their backs," Moore explains. "Then they climb to the top of these microwave towers. So you have to make sure what they're wearing on their backs is really durable and protective of this very expensive piece of equipment."

Although Moore has several patents, and has even won awards for her inventions, she says she doesn't think of herself as an inventor. "I think of myself as more of a problem solver," she says. "When I get engineering drawings, I just panic because it's difficult to read them. But if someone hands me an instrument, then I'm very comfortable. I ask, 'How is it going to be used? Who's going to be using it? What is the purpose of this instrument?' I don't work from drawings. I do much better with the actual instrument, to design around it. It's a trial and error process. It's all hands-on."

"There have been so many times that I've been thankful in my prayers to the African mothers," Ann continues. "They were really our inspiration and it is so wonderful to think that we in America can have the same closeness with our babies. Now mothers in Africa buy soft baby carriers. It's exciting to me to think that the idea has come full-circle." 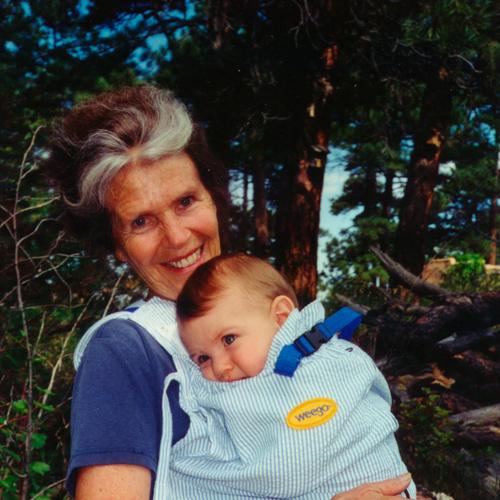 Ann Moore talks about inventing the "Snugli" baby carrier, inspired by the traditional West African practice of carrying babies in fabric slings on their mothers' backs.