In the summer of 1964, on Wyoming Mountain in Pennsylvania, a young woman named Naomi Albrecht sailed on a quiet lake, on a boat that her boyfriend, Newman Darby, had recently built. Darby watched her from the shore, calling out instructions and snapping photographs. At first glance, that summer outing seems like an unremarkable event. But Naomi was standing while sailing. She was also controlling the boat without the use of a rudder. She simply tilted the sail to change directions.

It had never been done before.

"I remember the second time out, I found myself feeling really good, and I said to Naomi, `This could be an Olympic sport!'" recalled Darby in an Innovative Lives program at the Museum on 9 April 1999. In fact, what Newman and Naomi referred to as "sailboarding" did go on to become an Olympic sport, known today as windsurfing. It also became a million-dollar industry and spawned an entire culture, typified by the California beach scene.

Darby recounted the story of how he became an inventor to a rapt audience of middle school students from the Washington metropolitan area. Darby recalled childhood boat rides on the Susquehanna River, summer vacations on the Chesapeake Bay, excursions to boat builders' shops with his father, and his early attempts to build a boat while in middle school.

"You have to keep trying and trying," Darby told the students as he recalled his disappointment when his first boat sank at age 12. After that failed attempt, he simply turned his boat into a "zoo" on land--for captured snakes--and resolved to build a better boat. 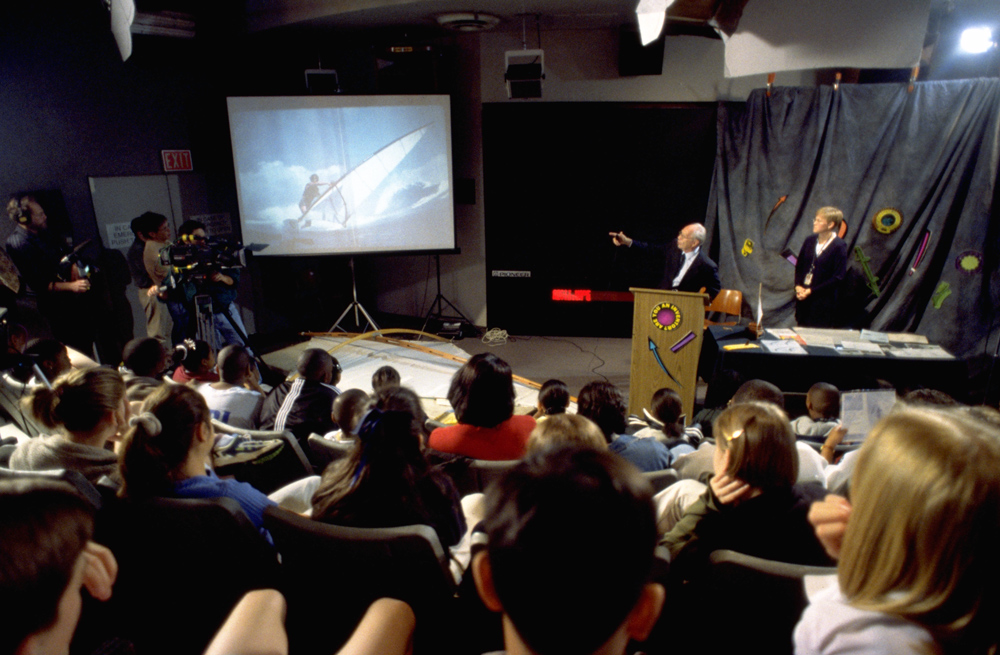 Newman Darby speaks to a group of students during and Innovative Lives presentation at the Smithsonian National Museum of American History, 1999. Photo by Hugh Talman

At age 14, after spending more time learning about boat building, he constructed his first working boat. "I was thinking about it all the time," said Darby. "I wanted to explore. I couldn't drive, but I could ride a bike and I could row a boat. I used half of a pup tent for a sail, and I went out to the islands (in the river) and had a great time."

Darby encouraged the students in the audience to try their hand at inventing. "You don't have to have a college degree to be an inventor," he said. "Kids invent things in their bedrooms."

Darby's middle school adventures were the beginning of a boat building career that continues to this day. Although he is a commercial artist by trade, Darby's passion is designing and sailing boats. As an adult, he invented a new kind of personal watercraft, a shallow draft motorboat that could hydroplane. "It was quieter and had a cleaner burning motor than today's jet skis," said Darby. He also designed experimental trimarans--three-hulled boats--as well as catamarans and kayaks. 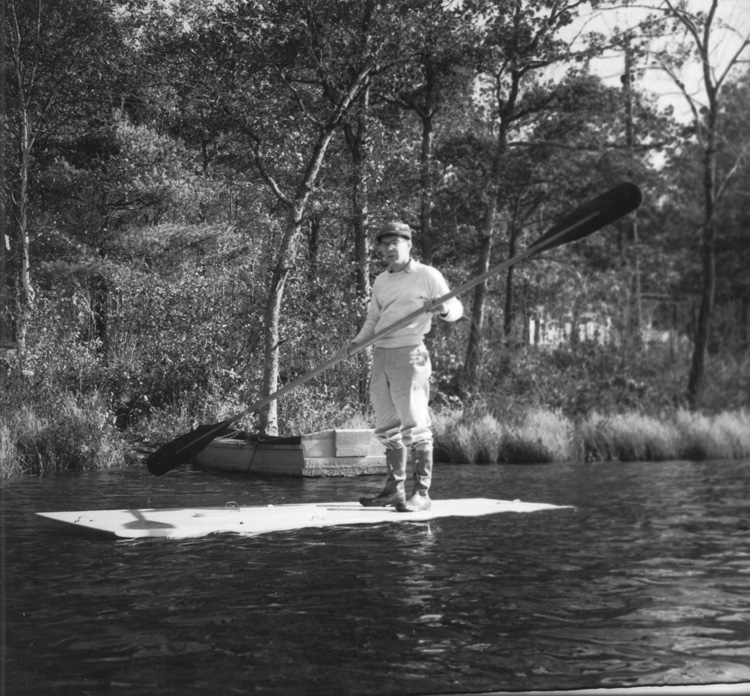 In the 1980s, Darby received a design patent for a one-person sailboat, the Darby 8 SS sidestep hull. His latest project is what he calls the "Windspear." "It's for cruising and paddling, a combination of a rowboat, kayak, and windsurfer with a paddle and fin combination," he said.

But one of the most exciting moments in Darby's invention career was that summer day on Wyoming Mountain with Naomi. A photography student and canoe racer, Naomi continually tested the sailboard with Newman. She also took countless photographs and home movies to document their work--and even sewed the sails. 1964 was an eventful year for them; they got married a few months later.

In some ways, the first sailboard was different from today's windsurfing boards. Darby's board was like a scow--then the fastest sailing monohull available--which enabled the sailor to skim flat water at high speeds. This base was later replaced by a surfboard, which gives modern windsurfers a distinctive sleek look, as well as the ability to surf on ocean waves.

Yet some windsurfer manufacturers are starting to make their boards more like the original sailboard. "The boards are going back to his original design," says John Chao, editor and publisher of American Windsurfer magazine. "They're finding that the short and wide boards actually go faster. There's also interest in going back to Newman's original kite sail. It's coming full-circle."

Darby also developed an important refinement to the first sailboard: the universal joint that connects the sail to the board, which allowed for greater control of speed and steering. Without it, the sailor's weight held the sail into a simple shallow hole. But high winds would lift the sail right off. Darby's universal joint was a critical improvement to the sailboard and remains a distinguishing feature on windsurfing boards.

Today, the Darbys live on the waterfront in Jacksonville, FL, far from the Pocono Mountains in Pennsylvania. "The river doesn't freeze here," said Darby, smiling. At 71, he is as active--mentally and physically--as men half his age. Between baby-sitting for his one-year-old grandson and teaching boat building courses, he continues to draw, paint, and invent. "My hobby is inventing and building things and that's what I want to do," he said. "I'm still building and I will keep on building."

He tries to make time to windsurf three times a week, and enjoys meeting champions of the sport. He recently went sailing with windsurfer Mike Gebhardt, a former Olympic contender who is world-famous in his sport. "Sometimes they don't know what to make of me," said Darby, of his windsurfing adventures with younger surfers. He recalls a recent trip to the beach where he was delighted to see an 80-year-old windsurfer. "Whoa, a gray-haired guy like me at the beach!" he said, laughing.

As Darby described his work, it was clear that he thrives on invention. He is fascinated by human kinematics: "learning how to coordinate your body with the mechanics." And he is intrigued by the possible historical consequences of the sailboard--if it had taken place earlier. "Humans have been sailing for over 5,000 years," he said. "But imagine if this invention had come along earlier. Windsurfers can tack and sail faster than the old sailing ships and they can sail on heavy seas. It could have changed transportation, warfare, everything." 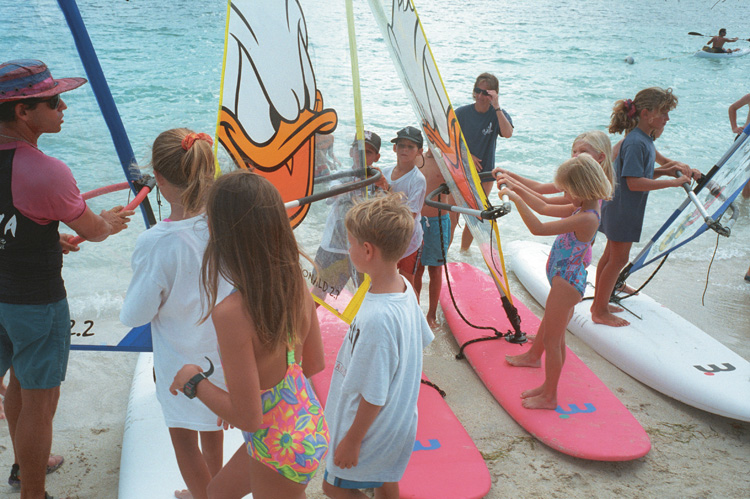 Children learning how to use a sailboard. Courtesy of Newman Darby

It's also obvious that Newman is full of enthusiasm for what has become one of the most popular water sports of all time. Describing a champion windsurfer he recently saw at the beach, he smiled and said, "He was pounding the surf, leaping the waves... it was so beautiful. You can feel the power of the wind and by feeling it, you can control it. It's the simplest form of sailing in the world. And now millions of people can do it." 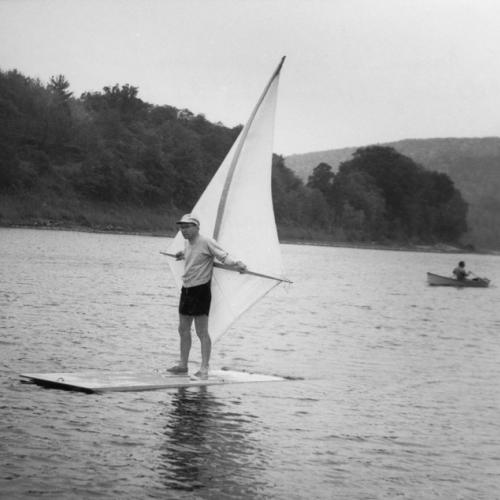 Commercial artist Newman Darby's personal, lifelong passion for boatbuilding led to his invention of the first sailboard, better known as a windsurfer. The Lemelson Center notes with sadness his passing on 3 December 2016.