From Innovators to Curators, Making Do is Nothing New

A teleworking curator looks at the ways in which those who created and used objects took advantage of what they found available.

Since March 2020, most Smithsonian staff members have been working from home, cut off from the collections many of us find so fascinating. This changes the use of things—an ironing board serves as a desk, a table clock becomes a support to prop up a phone, and a laptop computer used for word processing proves to have microphone and camera for online meetings and can even be used to access museum files.

Such alterations make one newly aware of the ways in which those who created and used objects took advantage of what they found available. A colleague informed me recently that chemical glassware known as the Florence flask received that name because Florentine merchants shipped liquids like wine and oil to England in glass containers of this shape. English instrument makers bought the flasks used, washed them up, and sold them for laboratory use. Of course they also came to produce their own version of Florence flasks, keeping the name if not the source.

This led me to think about the collection of mathematical apparatus that I tend. These objects are not as dramatic as the medieval palimpsests found in rare book collections (including an Armenian example in the Smithsonian’s Dibner Library). At one time, paper was extraordinarily valuable. Monks desperate for blank sheets unbound old manuscripts, scraped the sheepskin clean as much as possible, rotated the sheets, and reused them. A work thus created is now called a palimpsest. When careful readers spot underlying text, sophisticated imaging may make it possible to recover the original text. This is particularly notable for early work of the Greek mathematician Archimedes, who lived around 300 BCE. Copies of several of his works—in Greek—were created in the second half of the tenth century, and written over as a prayer book—also in Greek—in 1229. For some of these treatises, no other copies survived.  The Archimedes palimpsest was found, photographed, and given a rough reading around 1900. It recently was recovered, examined using multispectral imaging, published with many more details, and remains in private hands. 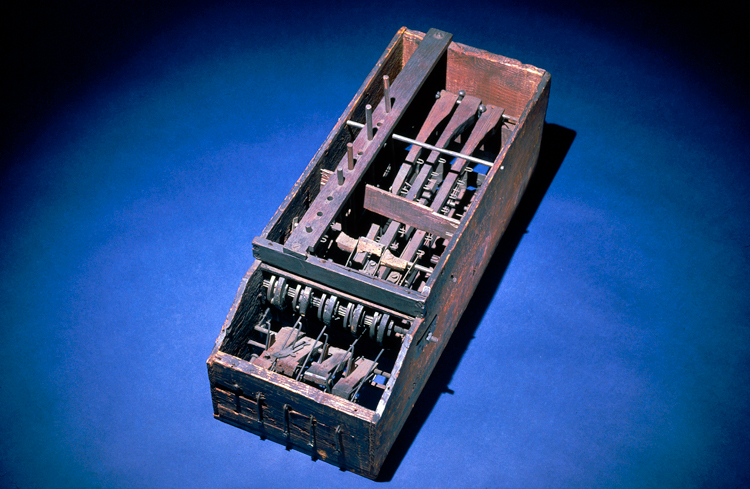 Macaroni box model Comptometer, ID no. MA.311192. This model was the prototype for the Comptometer, the first commercially successful adding machine with a mechanism driven by pushing the keys. Comptometers were used primarily in businesses and government offices. Dorr E. Felt made the model from a wooden box that had been used to ship macaroni. © Smithsonian Institution; photo 89-13536 by Rick Vargas

Objects in the Smithsonian mathematics collections made from recycled materials are not as old. For example, in the 1880s, an inventive young man working in Chicago named Dorr E. Felt envisioned a key-operated adding machine. To make a rough model of the machine, he used an empty wooden box once used to ship macaroni, old corks from wine bottles, meat skewers, and similar rough apparatus (the rubber bands—which may or may not have been recycled—have long since disintegrated). Felt’s model proved sufficiently persuasive to win investment from businessman Robert Tarrant, and they built a handful of sturdier machines that could function on the desktop. Felt & Tarrant went on to become a successful company, making durable adding machines at a factory using the latest in machine tools. Felt did save his original model, which is now on display at the Smithsonian.

Sometimes inventors reused materials in more mundane ways. For example, Herman Hollerith of Washington, DC, made enough money from his invention and sale of tabulating machines to acquire a set of cylinders (probably for storing recorded sound). Hollerith lined this box which he used to store the cylinders with blueprints from drawings of his machines. 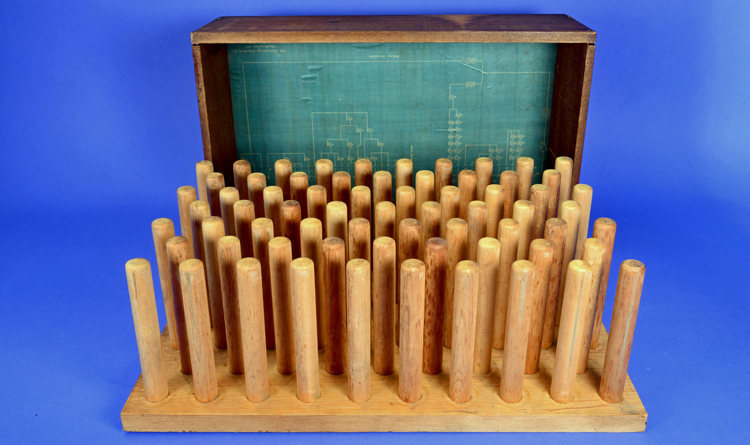 Box for cylinder recordings or Dictaphone reels, with lined with blueprints relating to Hollerith Tabulating Equipment for the US Census in 1900, ID no. 1995.3037.05. © Smithsonian Institution; photo AHB2016q087385 by Harold Dorwin

Initially, Hollerith designed tabulating machines for Census tabulation. He represented each person by a card, with holes in the card indicating different fields such as age, sex, ethnicity, place of origin, and the like. His tabulating machine had a set of counters, each counting the number of times a specific position for a hole—or combination of such positions—had been punched in a set of cards. Curiously, psychologists at Cornell University apparently found a use for single counters from a Hollerith machine. How they came to have them, or how they used them, we do not know; they came to the museum with more conventional psychological apparatus. By the 1930s, Hollerith’s company had merged with others and taken the name IBM. The appearance of the punch cards was quite different, and they were quite widely available among a small group of people. Naturally, punch cards were handy for use as bookmarks, notepads, or similar tasks calling for a piece of paper.  If one punched a row of holes, one could even have a tool for drawing dotted lines. 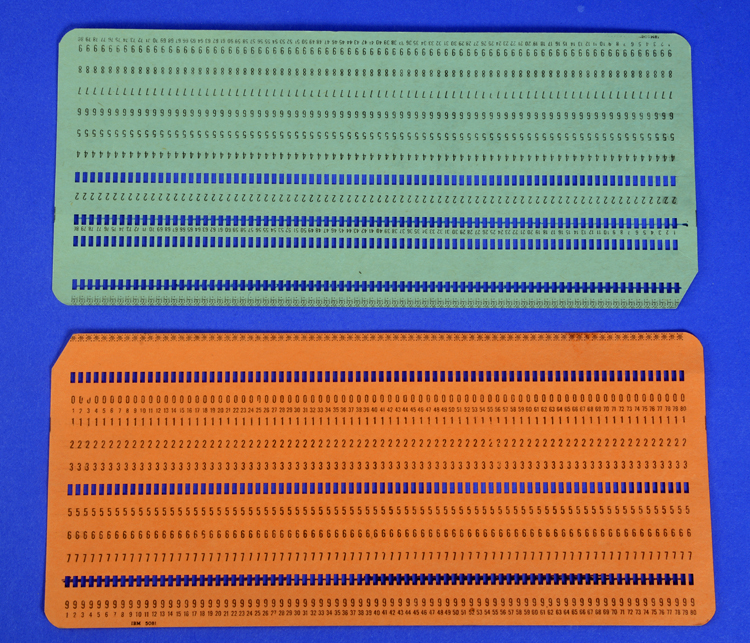 Math teachers and their students also made ingenious use of objects originally designed for other purposes. Here I will close with a few geometric models made by Massachusetts schoolteacher A. Harry Wheeler and his students. They usually built models from paper, plastic, or balsa wood. However, in one model of a sphere inscribed in a tetrahedron, the sphere looks very much like a Ping Pong ball. Wheeler occasionally taught at Brown University in Providence, Rhode Island, and he or a student incorporated a box from a store there into a model of the regular icosahedron pictured below. Similarly, another model (seen at the top of this page) seems to have been formed from parts of a carton box. 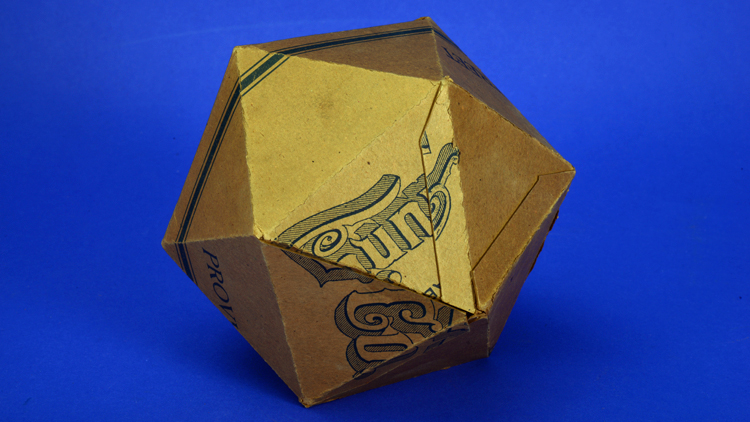 Geometric model of a regular icosahedron by A. Harry Wheeler or a student, ID no. 1979.0102.298. This cut, folded, and glued cardboard model has twenty equilateral triangles for faces. © Smithsonian Institution; photo AHB2016q011105 by Harold Dorwin

My favorite of these models, however, shows a cylinder that can be rotated to form a hyperboloid of one sheet. The German model publisher Ludwig Brill had made such a model using a brass frame, silk threads, and wooden weights. American copies dropped the weights, but still had elegant frames.

Philip Malmberg, a high school student of Wheeler, made the less expensive version of the surface. His frame used disks cut from a cardboard box, leftover spools from thread, a wooden dowel, and a bit of wire.

Near the beginning of this pandemic, I took an unused cloth for cleaning shoes saved from a hotel trip, washed it, sewed on two elastic earpieces, and had a facemask. Far more elegant—and more comfortable—masks have since become available. I keep the one I made as a memento. May creative reshaping of objects to meet new needs continue—as well as historians’ curiosity about how this has occurred. 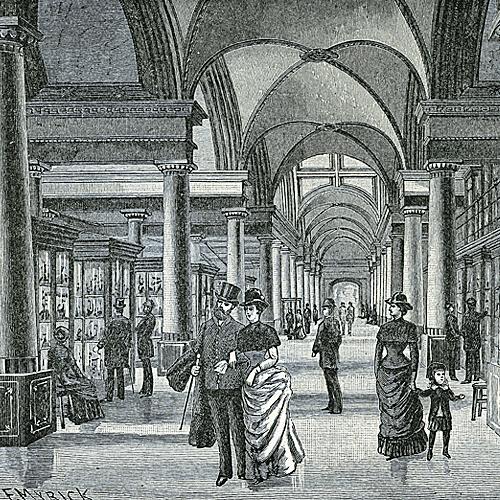 Patent Models and Prototypes on Display

To mark the issuance of the 10 millionth US Patent, we showcase ten nineteenth-century patent models and prototypes that are currently on display at the National Museum of American History. 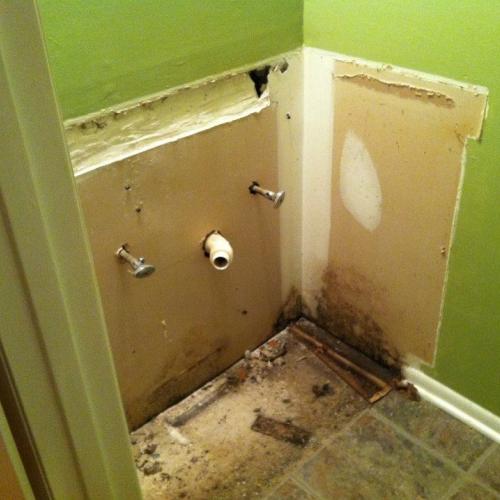 Growing up a DIY household engendered a definite “can do” attitude in me, so when I bought my first home, it seemed normal to take on projects myself.

Innovation in Engineering—What It Is, and What It Isn’t

If an invention does not meet a need or is otherwise unappealing, it is not innovative.