Two part, one day, self-expiring timebadge before and after expiration. Courtesy of David J. Haas

Invention stories are often about new ideas that arise when inventors recognize solutions to problems they are experiencing. But this invention story relates to my “Eureka moment" in 1976 in Kansas City, which happened completely out of the blue. I was attending an event requiring high security. The Secret Service was issuing each contractor and VIP a photo identification badge. The event ran more than a week, but I was only going to be there for two or three days. When I sat on the stool in front of their Polaroid Photo ID camera, I was excited to see how a very sophisticated ID badge would be produced.

Within a few minutes, the Secret Service agent had taken my picture as I sat in front of a banner hung on the wall with the words "Secret Service," providing a "tamperproof" background in the laminated badge. When I was given it, I was immediately struck that my ID badge had dates that were valid for all seven days of the event. I was only going to be present for a few days. I was surprised! If I lost the badge, it was still valid for the full week; anyone could use it in spite of the photo. (I’ve found that security badge photos are seldom compared to the individual.) My brain immediately pictured self-destructing badges that automatically invalidate themselves after a day or two to prevent further use. I remember being really disappointed that this Secret Service-issued badge was simply a laminated Polaroid photo, not the high-tech widget that I had imagined.

This “Eureka moment” remained buried in my mind for five years, until I happened to be speaking with the security director for a major corporation. During our conversation, I asked the question, “Do you have any problems with your visitor badges?” I was not prepared for his answer—he began telling me that visitor control and visitor badges were a plague! His corporation issued thousands of them each year, at many different facilities, and they would try to collect all of them, but people frequently forget to return them. Some visitors (like salesman) purposely keep them in order to make return visits easier. Sometimes people would even pick them up outside and use them to enter. WOW! Over the next few months, I spoke to a dozen or more security managers who confirmed that visitor badges were a real problem. Security directors told me that they loved my concept of a self-expiring visitor badge that might change color to show “EXPIRED” to prevent reuse.

During these years, all photo ID badges were taken with Polaroid cameras and laminated in a plastic pouch. Visitor badges typically had the date written on a paper label or card held in a plastic holder. I saw immediately that the challenge was going to be product cost, as paper labels cost only a few cents. All this was before desktop computers and direct thermal printers. So the market need was there, but to make anything sophisticated that could change color over time was beyond comprehension. 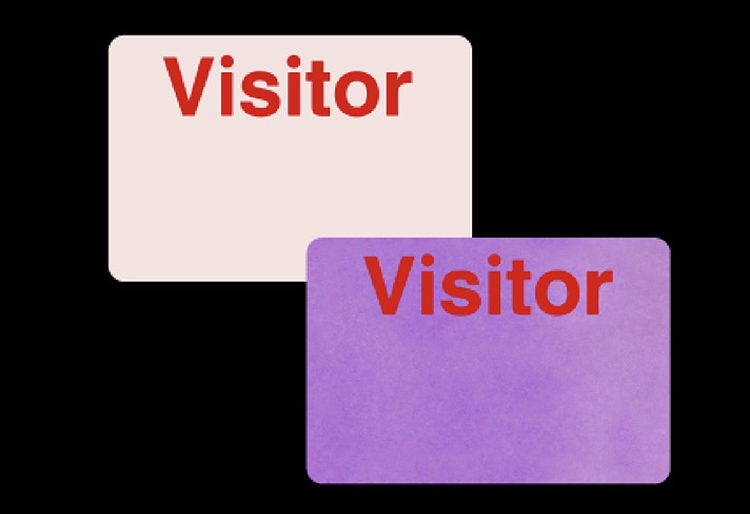 The Tempbadge LS8 Light Sensitive Badge. Indoors, visible and UV light from fluorescent bulbs slowly change the color throughout the day. This variable color change makes it impossible to alter any writing on the badge. In daylight, the badge changes immediately from white to blue. Courtesy of David J. Haas

We began the Tempbadge business using these two photochemical paper stocks, which proved successful as self-expiring visitor badges. Even though not perfect, they provided real security benefits for the end users: visual expiration within a day, tamperproof, and providing value-added for the end users in terms of not having to locate lost badges every day. Over time, we added Visitor Sign-in Systems and other products, and Tempbadge sales increased every year; this gave us the motivation to try to develop a true time-expiring color-change security badge.

I basically had given up on the idea of a time badge. But in 1985, I discovered US Patent 4,212,153, issued in 1980 for a color-changing sticker that could be applied to food packaging, for example, to signal that the food had passed its expiration date. The patent also mentioned that the invention could be used to show a time-delayed message in greeting cards.

These time stickers were basically never marketed, but I contacted one of the inventors and he sent me several samples. I absolutely could never get his color-changing indicators to work, but the technical means described in his patent seemed functional. I spent several months making my own one-day color-changing “indicators,” which proved to be the breakthrough we needed. We purchased the patent for a very reasonable sum (he was very happy to make any money from the invention), and I worked for another year producing one-day time badges. 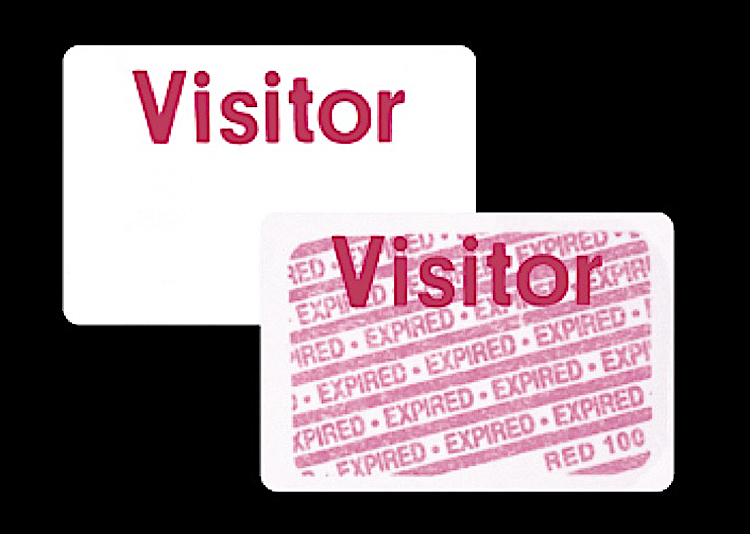 Two part, one day, self-expiring timebadge before and after expiration. Courtesy of David J. Haas

Time badges were produced in two parts: an adhesive "front-part" made with white adhesive on a clear film and a paper label "back-part" printed with diagonal red bars. The printing ink was formulated with a dye powder, like the dry toner in laser printers. To issue and activate the time badges, the white adhesive front-part is placed over the migrating-ink back-part. 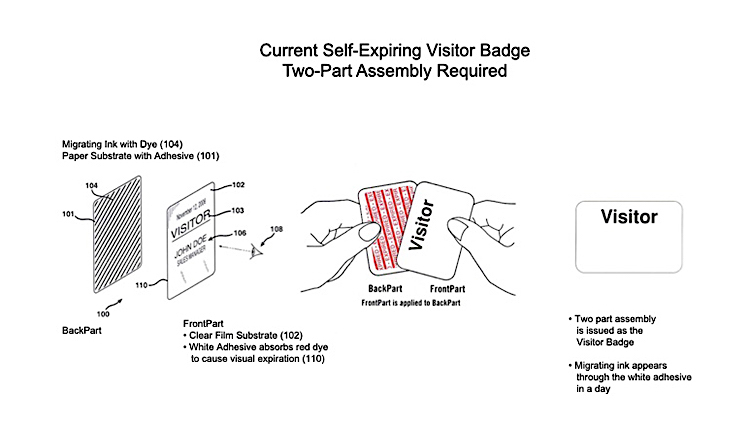 Time badges are produced as two parts: an adhesive "front-part" made with white adhesive on a clear film and a paper label "back-part" printed with diagonal red bars. The printing ink is formulated with a dye powder (like the dry toner in laser printers). To issue (and activate) the time badges, the white adhesive front-part is placed over the migrating-ink back-part. The red dye begins to bleed (migrate) into and through the white adhesive, becoming visible on the front of the badge in about eight hours. Overnight, the badge printing turns dark red to show “Expired.” Couresty of David J. Haas

The red dye begins to bleed, or migrate, into and through the white adhesive slowly, becoming visible on the front of the badge. By formulating the white adhesive properly and using a suitable red dye, the color from the diagonal bars begins to show in about eight hours, and overnight, the expired pattern of diagonal red bars becomes fully visible, expiring the visitor badge. This two part activation process worked quite well and several years later, we invented a one-part badge system by incorporating several layers into a single adhesive label construction. Self-expiring time-badges not only met the needs of our customers, but the color-changing time process is used in many other products. 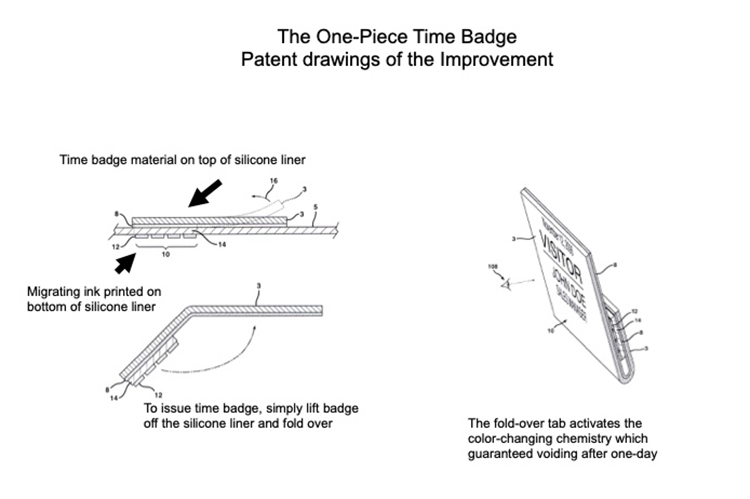 The one-piece time badge is produced by printing the migrating ink on the back of the “adhesive-release liner” so that when the badge is folded onto itself, the time badge is activated and self-expires in one day. Courtesy of David J. Haas

The World Trade Center in New York City was our biggest customer, as they were required to provide comprehensive people and vehicle control. The security manager, Douglas Karpiloff, recognized the unique benefits of self-expiring temporary IDs, noting that the World Trade Center had been marked as a “trophy” target by terrorists. 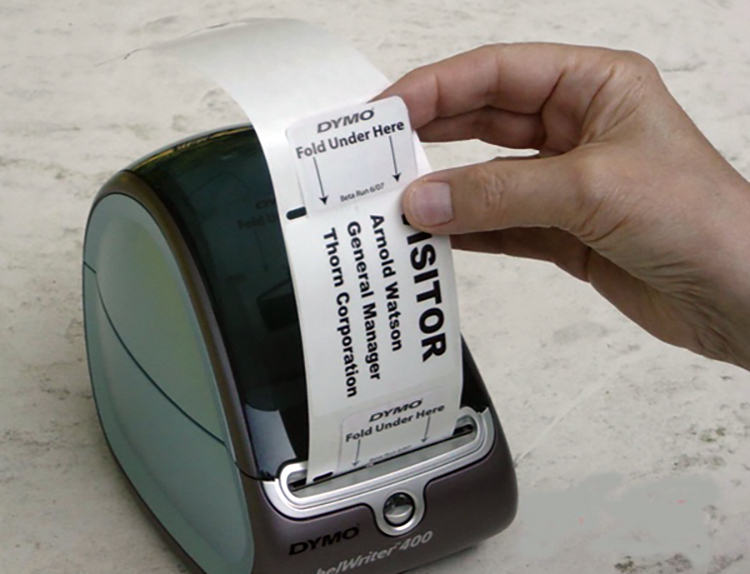 A simple direct thermal printer prints variable data on the front of the one-piece time badge. Once the “Fold Under Here” tab is folded, the self-expiring time badge is activated. Courtesy of David J. Haas

For more than twenty years, my wife Sandra and I operated Tempbadge, accumulated more than fifty patents, and provided tens of millions of visitor badges annually. Upon our retirement in 2002, we sold Temtec (the parent company for Tempbadge) to a major manufacturer of security products. They are still used worldwide. Our Tempbadge products have increased the safety of thousands of lives over the past fifty years. This is quite a rewarding accomplishment for such a simple idea.