How the sea clock changed navigation and timekeeping.

It may not seem obvious, but if you want to know where you are, you need an accurate clock. This was true in the 18th century, when mariners first used mechanical sea clocks to navigate uncharted oceans. It's still true today, as we find our way anywhere in the world with the incredibly accurate clocks of the Global Positioning System (GPS). And a major stimulus for inventions leading to more accurate time and navigation instruments has come from national governments. To gain the edge in economic and military power, countries have been willing to spend colossal sums on cutting-edge science and technology to develop and maintain navigation systems and the clocks they depend on.

Toward the end of the 17th century, the importance of time and navigation information was apparent to Europe's major seafaring powers--Spain, the Netherlands, Portugal, the Venetian Republic, England, and France. Each offered vast prizes to stimulate innovation on the era's crucial problem, how to find longitude at sea. By 1700, finding latitude at sea had become routine, easy, and fairly accurate. Finding longitude, though, was still mostly guesswork. But since it was known that Earth tracks fifteen degrees of longitude around the globe in one hour, with a good seaworthy clock, mariners in theory could calculate longitude by comparing local time, using the sun, to a standard time on a clock brought from port. Trouble was, there was no such seaworthy clock.

Prizes inspired an inventive outpouring from both the greatest scientific minds and the humblest tinkerers. Galileo Galilei, the prominent Italian man of science, entered the contest for both the Spanish and the Dutch longitude prizes. To Spain he offered an astronomical solution based on observing the moons of Jupiter, which he had discovered with a telescope of his own design in 1610 (a calculator he designed to find the positions of those Jovian moons survives in the Istituto e Museo di Storia della Scienza, Florence). For the Dutch prize, in 1642 Galileo proposed to make an accurate sea clock, the first clock ever to have a pendulum, but he died before constructing it; his son built a model in 1649.

In pursuit of a prizewinning sea clock, Dutch mathematician Christiaan Huygens changed timekeeping forever. He patented the first working pendulum clock in 1656 and later devised a watch regulator, the balance spring. These inventions proved essential for keeping good time and endured as basic components in mechanical timepieces for over three hundred years. Pendulum clocks immediately became the best timekeepers for use on land. But despite heavy subsidies from the powerful Dutch East India Company trading firm, several sea trials demonstrated that a pendulum would never work accurately on a heaving ship's deck. 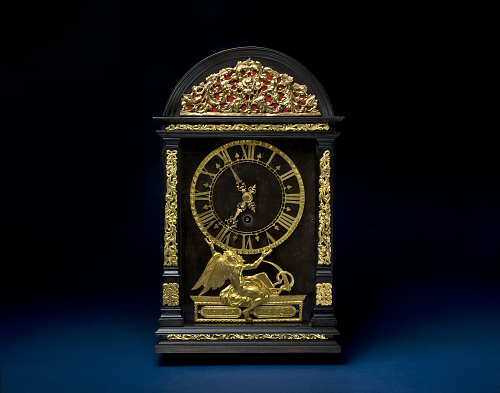 Johannes Van Ceulen made this clock in The Hague, Holland, in collaboration with Christiaan Huygens. Huygens (1629-1693) patented the design for the first practical pendulum clock in 1657. Courtesy of the National Museum of American History.

The problem of finding longitude at sea was finally solved in the 18th century with the invention of a seaworthy precision clock known as the marine chronometer (popularized by Dava Sobel's book, Longitude). The chronometer origins story has all the elements of a good yarn--clashing empires, murderous shipwrecks, lucrative prizes, treacherous politicos. Sobel's hero is the clockmaker John Harrison, whose timekeeper bested the finest scientific minds of his day to win, finally, England's Longitude Prize.

Establishing the feasibility of using an accurate clock at sea to determine longitude was a turning point, setting the stage for the clock's relationship to navigation in subsequent centuries--not only at sea, but on land, in the air, and in outer space. Improvements in position-finding have continued to accompany improvements in clock technology: the more accurate the clock, the more accurate the location. Harrison's first 18th-century shipboard clock astonished his contemporaries by keeping time at sea so well that, at the end of a rough four-week voyage in 1736, it was able to correct the ship's position by nearly seventy miles. Today, ships relying on radio signals from GPS can fix their positions to within about seventy inches no matter how long they are at sea. 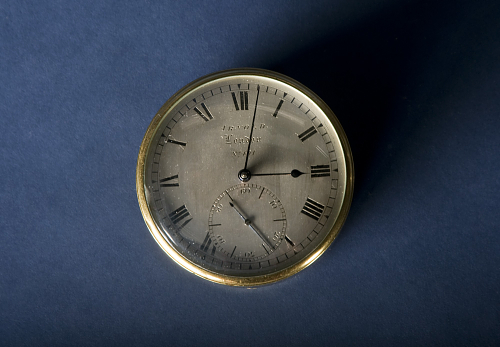 This box chronometer, made by John Roger Arnold in London about 1825, is a specialized timekeeper for finding longitude at sea. Courtesy of the National Museum of American History.

By the opening years of the 20th century, time and navigation had entered the radio age as U.S. Navy stations began to broadcast time signals for ships at sea and synchronized them to increasingly accurate clocks at the U.S. Naval Observatory. In 1940 Alfred Loomis, a wealthy amateur scientist fascinated with accurate clocks, conceived of LORAN, a long-range radio navigation system for planes and ships crossing the Atlantic. Evolved from a British short-range system called GEE and developed further at MIT's famed Radiation Laboratory, LORAN broadcasts began in 1943. Timing was critical for LORAN's position fix: a LORAN receiver pinpointed its location by measuring the difference in time--in millionths of a second, in contrast to the whole seconds of the day's best mechanical clocks--of the arrival of synchronized radio transmissions from groups of stations covering areas of tens of thousands of square miles.

Research for a satellite-based radio-navigation system began in the wake of Sputnik in 1957. In the years that followed, competing satellite navigation systems emerged with U.S. Department of Defense (DOD) funding--most notably Transit at Johns Hopkins University Applied Physics Laboratory, Timation at the U.S. Naval Research Laboratory, and Project 621B at the Aerospace Corporation for the U.S. Air Force. GPS formally began in 1973 when the DOD consolidated the efforts and established the Joint Program Office, with U.S. Air Force managers to procure, run, and maintain the system.

Just as John Harrison had designed a whole new kind of timekeeper for maritime use in the 18th century, 20th-century clockmakers--many of them physicists and electrical engineers--devised accurate, long-lived "atomic" clocks for GPS that could fly unattended in space. Clocks are actually fundamental to the way GPS works. Each GPS satellite contains a suite of atomic clocks, turned on sequentially if necessary. Each is required to keep time to within a few billionths of a second. Each satellite transmits signals continuously to indicate its location in current time, and all the clocks are synchronized. A GPS receiver calculates its position by measuring how the signals arrive at slightly different times based on the distance to each satellite.

As designs for receivers, space-qualified clocks, and other components evolved, positioning and navigation accuracy improved. Rockwell International (now a division of Boeing) was the prime contractor for building the first forty GPS satellites, the first of which launched in 1978. By 1986 eighteen satellites were in orbit, making the system usable for many applications. The full constellation of twenty-four satellites needed for global coverage was in orbit by early 1995, with more than thirty satellites operational after 2010. Today, with four of those satellites in view, GPS users can know continuously their altitude, latitude, and longitude to within a few meters and the time of day exact to within a few nanoseconds.

Like the integrated circuit, the internet, and other technologies with military origins, GPS time and location are responsible for major transformations in civilian life. GPS signals are now available continuously, globally, and at no charge to just about everyone with a receiver, with civilian users far outnumbering military. And GPS is not only the traveler's high-tech navigation aid. Innovations that combine GPS coordinates with portable computing power, communications, map data, and electronic images have led to an explosion of new civilian applications--from time-stamping financial transactions to managing vehicle fleets to location-based advertising on mobile phones. The implications for the future are profound.

For example, GPS isn't just for getting people from here to there. Robots, or at least mobile robots, can use GPS too. According to their proponents, these robots will change the future of driving. The promise of cars and trucks that can drive themselves first came to broad public attention in a set of robot vehicle races in 2004, 2005, and 2007. The Defense Advanced Research Projects Agency--DARPA--organized the Grand Challenge races to stimulate invention for a future fleet of driverless military vehicles. The challenge for the competitors was unprecedented: to build machines that replicate the parts of human intelligence we call on when we drive. Two of the competitors have been added to the Smithsonian's robot collections at the National Museum of American History: the 2005 Grand Challenge winner "Stanley," and "Ghostrider," a self-driving motorcycle. 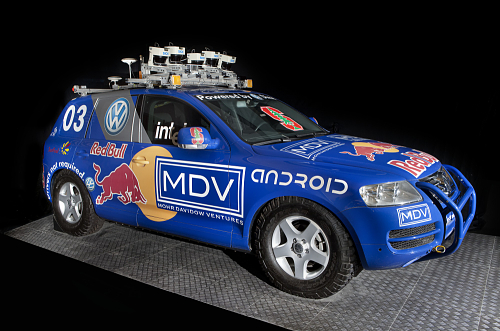 This 2004 vehicle can navigate for itself, without a human in the driver’s seat or at remote controls. The robot’s creators nicknamed the modified Volkswagen Touareg “Stanley.” Courtesy of the National Museum of American History.

Competitions relating to robotic navigation systems are stimulating interest in science and technology for students too. The Institute of Navigation--a professional society founded in 1945 for advancing the study and practice of positioning, navigation, and timing--has recently expanded its sponsorship of robot contests to include annual prizes for student-built robot lawnmowers, autonomous snowplows, and robotic unmanned toy-sized cars that can navigate through a LEGO city. The National Museum of American History and the Lemelson Center recently hosted the national finals of the Mini-Urban Challenge for those tiny toy-sized robots, won by West High School of Torrance, California.

To better understand how the contemporary world has come to depend on exact time and location, a team of Smithsonian scholars (Paul Ceruzzi, Roger Connor, Andrew Johnston, David Romanowski, and Carlene Stephens) developed content for the exhibition Time and Navigation: The Untold Story of Getting from Here to There. The project is a unique collaboration between two of the Smithsonian's largest and most popular museums: the National Air and Space Museum and the National Museum of American History. As this brief overview shows, the team's research is uncovering a treasure trove of stories about invention and innovation from the past three hundred years.

Time and Navigation: The Untold Story of Getting from Here to There opened March 2013 at the Smithsonian's National Air and Space Museum and is on display on the second floor. Learn more by visiting the online exhibition.