Samuel Hopkins received the first US patent, signed by Geoge Washington, in 1790 for his method of potash and pearl ash manufacture. Courtesy of Mount Vernon

On July 31, 1790, the inventor Samuel Hopkins was awarded the first US patent for a new method of making potash and pearl ash. Potash, later termed potassium carbonate, was used as a fertilizer, as a detergent to clean fibers in textile manufacturing, and as an ingredient in soap. Pearl ash was a more refined material used in glassmaking, to make saltpeter for gunpowder, and as a leavening agent in baking (baking soda and baking powder were not invented until the 1840s).

Both potash and pearl ash were manufactured by burning wood, mixing the ashes with water, and then boiling off the liquid in large iron kettles, typically at the edges of newly cleared fields. They were valued exports in the colonial and early republic periods. Some colonial prospectuses (colonial ventures of the early 1700s often had speculative plans analogous to ones written by tech startups today) anticipated that potash exports would cover the costs of clearing land and starting a new community. By the 1790s, towns across New England had potash operations, with the bulk of the final product exported to England. Quality varied widely, generating confusion and disputes over pricing. Improved methods for potash and pearl ash manufacture that would result in a more consistent product were in demand. 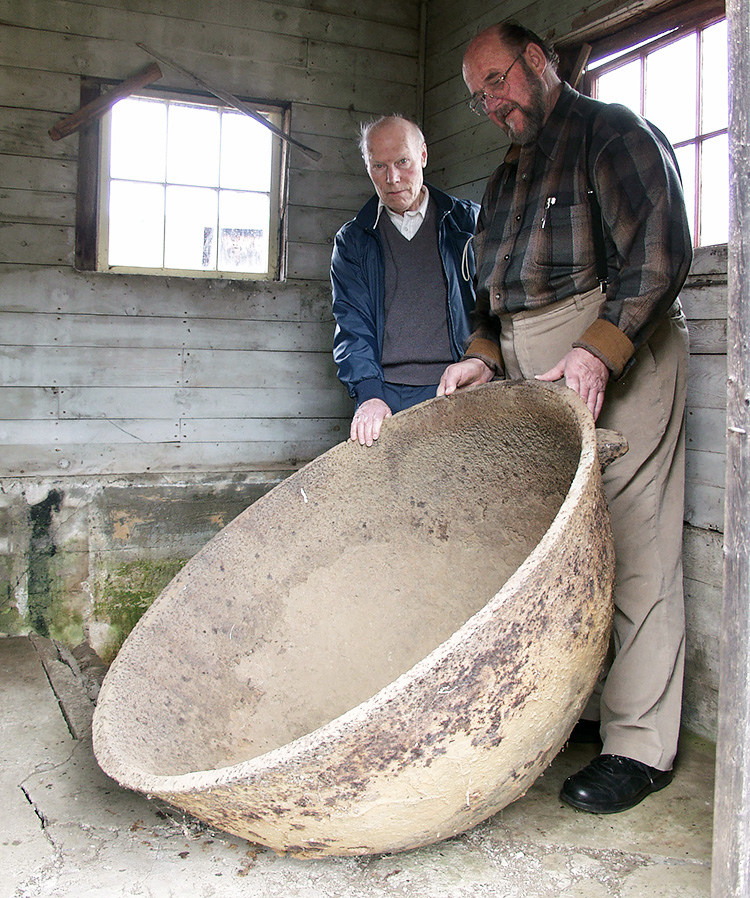 We know surprisingly little, however, about how technologies spread in the late 1700s or how inventors could earn money from their work. Today, inventors generally pursue one of three paths: setting up their own company to manufacture their invention, selling their patent outright to an entrepreneur or company, or licensing the patent to businesses willing to pay royalties. But the origin of these strategies and how they evolved over time are not well known.

Samuel Hopkins himself left few historical records. Even identifying the correct Samuel Hopkins (there were several people with the name living in North America in the 1790s) has been somewhat tricky. It was long thought that he was a Vermont native; in the mid-1950s, officials in Pittsford, Vermont, erected a historic marker in his honor. But detailed archival work by the historian David Maxey in the 1990s identified the more probable Hopkins as a Philadelphia Quaker who spent several years in the 1790s in frontier areas of Pennsylvania, New York, and Vermont, before returning to the city.

Thanks to the recent surfacing of a patent licensing agreement from 1791, we are learning more about Hopkins, including his efforts to generate revenue from his patent. In 1957, a crew tearing down a building in Castleton, Vermont, found a small metal box in the back of a chimney. Inside was a patent license granting the local businessman Eli Cogswell a concession to build and operate a potash works. That original document was held in private hands for the next six decades. In September 2019, the Smithsonian’s Lemelson Center and the Division of Work and Industry at the National Museum of American History were able to secure and preserve this original patent license.

Making a Living as an Inventor

After receiving the nation’s first patent, Hopkins initiated the nation’s first patent licensing program. His approach included three distinct elements. First, he spoke publicly about his new method and published a pamphlet, “An Address to the Manufacturers of Pot and Pearl Ash.” Alongside a detailed explanation of his manufacturing method and how to construct his innovative furnace, the pamphlet reproduced the text of the 1790 Patent Act and of his patent. Hopkins offered license terms of an initial payment of $50 (or a half ton of potash in casks) plus annual payments of $50 starting after three years until either $200 or two tons of potash had been paid. The payment plan made it affordable for a shopkeeper or other business leader to license the technology while also incentivizing them to operate for many years. Hopkins also appears to have been seeking to disclose enough information about the method to attract licensees while warning pamphlet readers who copied his ideas without paying royalties that they were violating his property right.

Second, he corresponded with leaders who were developing the country’s economy, including Thomas Jefferson and the merchant Henry Drinker. Hopkins shared his invention and ideas for potash manufacturing, while seeking their endorsements. Third, he employed his son-in-law, the attorney William Shotwell, in New York, and others in eight cities around New England and the mid-Atlantic region as licensing agents. Licensees could sign agreements within a single day of travel across the region north of Philadelphia and east to Boston.

Within six months of receiving his patent, Hopkins had developed a pre-printed three-page licensing agreement. Printed before the invention of lithography, the license was most likely made through “intaglio,” in which a skilled craftsman etched the text into metal plates. Unlike relief printing from moveable type or letterpress, intaglio did not push ink through the paper. The text mimicked handwritten documents, which would have been used for such agreements in previous decades. It could have been printed in either Philadelphia (where Hopkins lived) or New York City (where it was signed, and closer to Shotwell’s home in Rahway, New Jersey); both cities had multiple shops in the early 1790s with equipment to print the license agreements.

The terms and conditions offered by Hopkins emphasized quality and branding. License number 310 authorized Eli Cogswell of Castleton, Vermont, to build a single furnace according to Hopkins’s method and to operate it for 7 ½ years. Cogswell was a man of some wealth and standing according to the 1790 census, which listed his title as esquire and had him heading a household of 10, including his wife, two sons, and six other people, presumably workers or extended family members. Other records reference Cogswell as Castleton’s first town clerk in 1777, a merchant, and a “lister” in 1782, a colonial-era title for someone who kept a list of people being taxed and their property.

A long section of the agreement then outlined the conditions under which Cogswell could dismantle and move the potash production, and stated that Hopkins would issue a new license if the facility burned down. Next, the license specified how the potash or pearl ash should be branded. Every “barrel, cask or package” had to be marked with the patent license number, Eli Cogswell’s name, and a sequential number starting with the first package produced. Furthermore, the building in which the potash and pearl ash were made had to post a sign with the license number that stated, “Pot and Pearl Ash Works, licensed by Samuel Hopkins.”

Although historical records are spotty, Eli Cogswell does not appear to have built a sustained business based on his license from Hopkins. According to one source, Cogswell moved to Ohio in the early 19th century, where he owned a farm before he passed away in 1831. Others may have had greater success; a local history of Rutland County in Vermont lists some 14 different entrepreneurial producers of potash in the 1780-1820 period, although most also worked as shopkeepers or in other trades.

Hopkins himself returned to Philadelphia by late 1791, and was listed on city directories as a “pot-ash manufacturer,” and after 1798 as a “gentleman.” Although the license signed by Eli Cogswell was number 310, it remains unknown how many actual licensees Hopkins secured. Available evidence suggests it was far fewer than 310; had he done so at his terms of $200 payable over five years, he would have netted $62,000 (equivalent to $1.7 million today). However, by 1800 Hopkins and his wife were living with their daughter and her husband, William Shotwell, in Rahway, New Jersey, and correspondence suggests they were not especially well off. Hopkins nevertheless continued to invent, securing patents on the production of “flour of mustard” in 1813 and 1817.

Within a few decades of Hopkins’ pioneering licensing program, inventors regularly sold or licensed their patents. Not all were successful. Eli Whitney, for example, found little success when he tried to license his 1794 patent for an improved cotton gin. Although he later won lawsuits against several operators that used a similar technology to separate seeds from cotton fiber, he was left embittered by the experience. Other inventors had greater success. In an 1827 report, Patent Office director William Thornton recounted how the inventor Gilbert Brewster sold his patents on improved machinery for spinning wool immediately upon their issue for $10,000 (equivalent to $256,000 today). Licensing remains one of the few pathways by which independent inventors can earn money from their work, although many inventors have found that securing licensees remains as difficult today as it was for Samuel Hopkins in the early 1790s.

Special thanks to my colleagues Peter Liebhold, for collaborating to secure the Hopkins patent license, and Joan Boudreau, for her insights on 18th century printing practices. An in-depth version of this blog has been published in Technology and Innovation, the journal of the National Academy of Inventors.