Maryann Feldman presents to the participants of our workshop, “Can Innovators Be Made?” at the National Museum of American History, 21 March 2015. © 2015 Smithsonian Institution; photo by Chris Gauthier

Making a Book about Making Innovators

Historian Eric Hintz describes the five-year collaboration behind the publication of Does America Need More Innovators?, the latest title in our Lemelson Center book series.

In April 2019, Matthew Wisnioski, Marie Stettler Kleine, and I officially launched our new edited volume, Does America Need More Innovators?  The book is the latest title in the Lemelson Center Studies in Invention and Innovation book series, published in association with MIT Press. With essays by twenty-two contributors, the assembled volume is a critical exploration of today's global imperative to innovate. This blog post is my memoir of our five-year intellectual journey to make a book about making and training innovators.

I coordinate the Lemelson Center Fellowship Program and in summer 2014, we were pleased to welcome Matthew Wisnioski as a postdoctoral fellow. Matt is an associate professor in the Department of Science, Technology, and Society at Virginia Tech and came to the Smithsonian to work on a forthcoming monograph, tentatively titled Every American an Innovator, that will examine several decades of initiatives to cultivate and train innovators. Matt was researching the Center’s own efforts in this area, including the motivations behind Spark!Lab and past exhibitions such as Invention at Play.

Matt invited me to dinner one evening, and over pizza and beer, he proposed that we co-host a scholarly workshop on the topic of making and training innovators. I thought it was a great idea, but was a bit concerned about how we would handle all the operational details. Matt reassured me that he had a great PhD student and research assistant named Marie Stettler, who had recently graduated with an engineering degree from Rose-Hulman Institute of Technology and would be able to help produce the event.

March 2015: Can Innovators Be Made? Workshop

We secured funding from the Lemelson Center and several units at Virginia Tech, including the STS department; the College of Liberal Arts and Human Sciences; the Institute for Creativity, Arts, and Technology; the Human Centered Design Interdisciplinary Graduate Education Program; and the Office of the Vice President for Virginia Tech’s National Capital Region campuses. We decided to host a two-day workshop in March 2015, with one day at Virginia Tech’s Research Center in Arlington, Virginia, and one day at the Smithsonian’s National Museum of American History in Washington, DC. We gave the workshop a discussion-inducing title: Can Innovators Be Made?

Over the winter, we pulled together an intellectual framework for the workshop and divided it into four themed sessions. The sessions explored:

We invited a diverse mix of workshop participants from academia, industry, and government, each of whom had an interest in the history and contemporary practice of teaching innovation skills. When we convened the workshop, the room included students, economists, historians, venture capitalists, inventors, entrepreneurs, designers, computer scientists, advocates, educators, and government policymakers. We knew that some participants were keen supporters of innovation programs, while others were critical of various efforts to train innovators.

We also knew it could be difficult to talk across the various disciplines, so we established a few simple ground rules. We asked everyone to engage in constructive dialogue through good-faith participation. We asked architects of innovator initiatives to speak frankly and personally about how their programs had emerged and what made them tick. And we asked everyone to engage the group with as little discipline-specific jargon as possible. The workshop featured a few moments of passionate disagreement, but overall, we achieved our goal of a constructive dialogue that uncovered multiple perspectives on innovator training.

After the workshop, we spoke with Lemelson Center senior historian Joyce Bedi, the lead co-editor of the Lemelson Center Studies book series, about bundling the papers from the workshop into an edited volume for our series. Joyce and Katie Helke, the MIT Press STS acquisitions editor, encouraged us to develop a book proposal.

Matt, Marie, and I tinkered with different ways of organizing the proposed volume. We evaluated the various workshop papers and invited a few additional contributors to write new essays that would fill certain gaps in our analysis. In September 2016, we submitted a book proposal that situated our proposed volume in the existing STS literature, and then we waited.

When we received the readers’ reports in January 2017, the reviews pointed to a key organizational revision. Much like the workshop, we had pitched a volume organized around topical themes, such as diversity and differential access to training and training for different age groups. However, the reviewers had difficulty squaring the different attitudes among the volume’s contributors. Some authors were decidedly pro-innovation and deeply invested in training innovators. Other contributors were highly skeptical of innovator training initiatives, which they believed were shallow, corrupted by big-money influence, and infected by racial, gender, and economic inequality. And some reformist contributors were responding to those critiques by improving how they conducted innovator training. 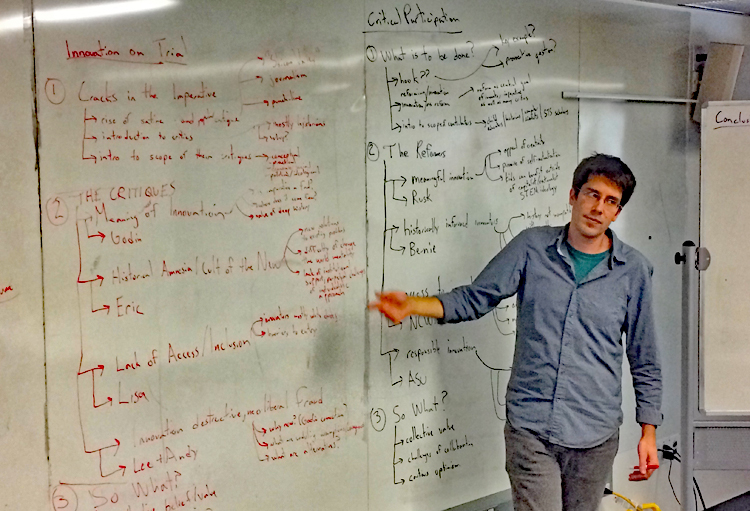 Matt Wisnioski at the whiteboard during a crucial 2-day work retreat at Virginia Tech in May 2017. © 2017 Smithsonian Institution; photo by Eric S. Hintz

Thanks to the reviewers, we recognized that the widely divergent—sometimes incompatible—views of our contributors was the central theme of our project. We took a deep breath and got to work. In May 2017, during a crucial two-day work retreat at the Virginia Tech campus in Blacksburg, Matt, Marie, and I did a lot of whiteboarding and sketched out the new organization and themes of the book. We reframed the volume around the contributors’ political and epistemic attitudes toward innovation. Instead of four topical sections, we reorganized the volume into three sections, highlighting the Champions, Critics, and Reformers of innovation. 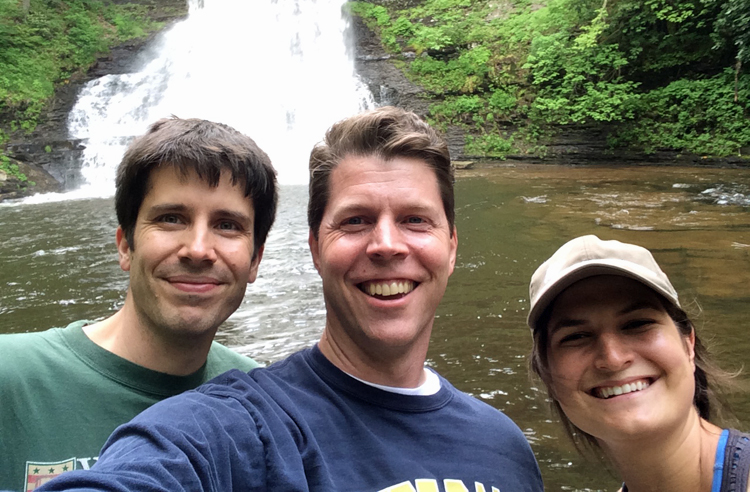 We (left to right, editors Matt Wisnioski, Eric S. Hintz, and Marie Stettler Kleine) also made sure to have some fun. Matt and Marie took me on a hike to see the Cascade Falls near Blacksburg, Virginia, and we went to a nice dinner at a restaurant high on the bluffs above the New River. © 2017 Smithsonian Institution; photo by Eric S. Hintz

The next several months were a blur. We worked closely with individual contibutors to improve their pieces. We also wrote and rewrote all of the editors’ sections, including Matt’s introductory chapter, the co-authored section intros, and the volume’s conclusion. We sent the entire manuscript back to the MIT Press readers in November 2017, and were gratified by the generally positive feedback on the reorganization.

As editors, we also put our own ideological cards on the table. In our research, we study the history and consequences of STEM and innovation training initiatives. But as educators, we work every day on the supply side of the innovator imperative, i.e., we inspire kids to become inventors through our exhibitions and public programs at the Smithsonian’s National Museum of American History and teach future engineers in the labs and classrooms at Virginia Tech. We embraced our role as “critical participants” who could practically apply our growing expertise to improve innovator training writ large. We saw the forthcoming volume as our own critical intervention in that enterprise.

We worked together in late 2018 and early 2019 on all the tasks required to turn a manuscript into a printed book—copy edits, page proofs, an index, cover design, and obtaining endorsement “blurbs” from Steve Blank and Patrick McCray. We also made plans to market and promote the volume. I finally joined Twitter (@EricSHintz) to help publicize the book. Marie emailed a press kit to our twenty-two contributors to enlist their help promoting the volume. And Matt gave a talk at the MIT Press bookstore in Cambridge to officially launch the book on 16 April 2019.

We also chose a new book title. Following the workshop, the original title was Can Innovators Be Made?  Throughout 2017, we thought about calling the book The Innovator Imperative. However, by 2018, we had settled on a provocative question for the title, Does America Need More Innovators?  We thought the new title highlighted the relentless imperative to train a nation of innovators while signaling that our attitudes about innovation are now at a crossroads.

Meanwhile, our personal lives continued to evolve over the course of the project. Marie Stettler married Kaleb Kleine and became Marie Stettler Kleine; in summer 2018, they bicycled 3,785 miles across the US to raise money for multiple sclerosis research. After a decorated collegiate cross-country career at Johns Hopkins, Matt returned to competitive running and completed the 2019 Boston Marathon in a speedy 2:43:36!  And I began playing drums again in 2016, starting a classic rock cover band with some of the other dads in my neighborhood. Meanwhile, one of the best personal outcomes of the last few years is that I have gained two lifelong friends in Matt and Marie.

Before signing off, I want to thank all of the people who made our book possible: Matt and Marie, of course; our families; our twenty-two contributors; Lemelson Center Studies series co-editors Joyce Bedi, Arthur Daemmrich, and Art Molella; MIT Press acquisitions editor Katie Helke; copy editor Deborah Masi; and the whole team at MIT Press for having faith in the project. As you thumb through your copy of the book, I hope you can appreciate our journey: the highs, lows, frustrations, and joys that are baked into every page. 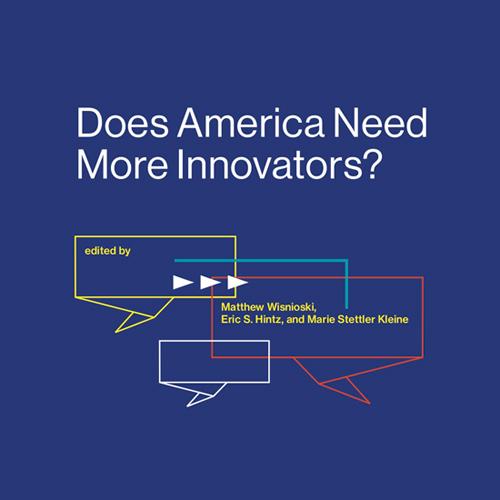 A critical exploration of today's global imperative to innovate, by champions, critics, and reformers of innovation. Published in the Lemelson Center Studies in Invention and Innovation book series with MIT Press.