One of the best aspects of my job is meeting inventors from myriad fields who always have inspiring stories to share about their lives and inventive careers. I first heard about Super Soaker inventor Lonnie Johnson many years ago when a colleague interviewed him for background research contributing to the Lemelson Center’s Invention at Play (IAP) exhibition. Since then I have long looked forward to the opportunity to invite him to the Museum for a special program to talk about his engineering career and many inventions along the way. I believe he is the perfect person to kick off the Lemelson Center's 2017 Innovative Lives series here at the Smithsonian's National Museum of American History on February 2, 2017. 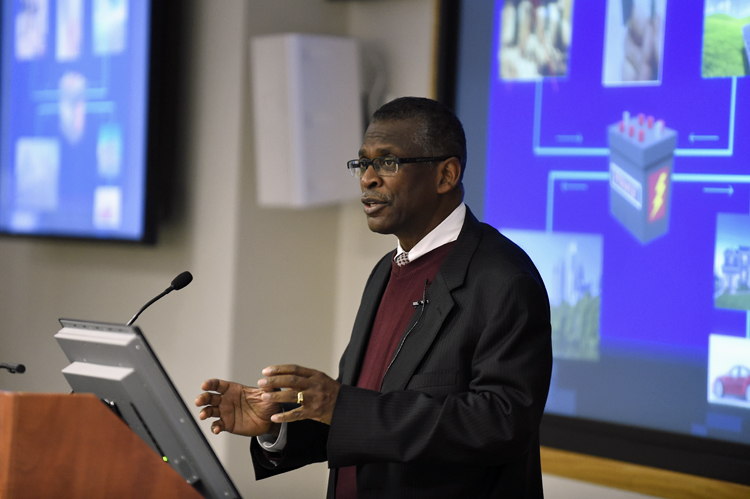 Lonnie was born in Mobile, Alabama in 1949. According to Biography.com, his father was a World War II veteran who worked as a civilian truck driver for the US Air Force and his mother worked in a laundry and as a nurse’s aide. Growing up, Lonnie loved tinkering and repairing things like his father did around the house, skills that helped him later as an inventor. In notes from the telephone interview conducted by Ken Brown for IAP, Lonnie said “my parents’ support was a big deal…I played with rockets when I was a kid. One day I was making some rocket fuel on top of the stove. It ignited and could have nearly burned the house down. Instead [of getting trouble] my parents got me a hot plate and said ‘do that kind of stuff outside.’ My parents were really patient. They bought me a lot of toys and things, knowing the first thing I would do is take them apart.”

Going to school during segregation, Lonnie attended the all-black Williamson High School in Mobile where he was nicknamed “The Professor” by his friends. A defining moment in his life came in 1968 when he represented his high school at a science fair sponsored by the University of Alabama. As the only black student competing, he won first prize for “Linex,” a compressed-air-powered robot he had created out of junkyard scraps and other spare parts. Despite his success, he later recalled “The only thing anybody from the university said to us during the entire competition was “goodbye’ and “y’all drive safe, now.’”

Lonnie proved his high-school prize was no fluke when he earned a BS degree in mechanical engineering in 1973 and an MS degree in nuclear engineering in 1975 from Tuskegee University in Alabama. (Later he also received an honorary PhD in science from Tuskegee for his professional accomplishments.) According to his official Johnson Research and Development Co. biography, after graduate school he became a research engineer at Oak Ridge National Laboratory, then joined the US Air Force and served as acting chief of the Space Nuclear Power Safety Section. In 1979 he accepted a position at NASA’s Jet Propulsion Laboratory (JPL), where he worked on the Galileo mission to Jupiter as Senior Systems Engineer.

A few years later he returned to the Air Force to serve as an Advanced Space Systems Requirements Officer at Strategic Air Command and then as Chief of the Data Management Branch, SAC Test and Evaluation Squadron, at Edwards Air Force Base. He helped develop components for the stealth bomber and earned medals for his Air Force work. In 1987 Lonnie returned to JPL to work on the Mars Observer project and early stages of the Cassini mission to Saturn project, earning multiple NASA awards for his spacecraft system designs.

Despite this impressive resume, Lonnie is most famous for the results of inventive pursuits during his spare time. In 1982 he was working at home on an environmentally-friendly heat pump that used water instead of Freon, and attached a high pressure nozzle to the bathroom sink. The resulting powerful stream of water that blasted out when he pulled the nozzle’s lever inspired him to tinker with it as a potential toy. He gave a prototype to his daughter, which proved to be a great success with her friends. Lonnie told Ken, “I thought to myself that I would focus on the Super Soaker because it would generate some revenue and pay for the costs of other things I wanted to do.”

However, he has also invented more mundane things along the way, such as a “wet diaper detector” (US Patent 5,266,928) and a “portable multimedia projection system” (US Patent 6,966,651), and a “hair drying curler apparatus” (US Patent 5,299,367) co-invented with Francis LeVert. Important to note that he didn’t stop working on toys, either. Johnson R&D has a license agreement with Hasbro for the design, engineering, and development of Nerf soft foam dart guns. Lonnie was inducted into Alabama’s Engineering Hall of Fame in 2011—the first African American engineer to be so honored.

If you’re interested in learning more about Lonnie’s work from Super Soaker to engine conversion technology, watch his TEDxAtlanta talk “Revolutionary Designs for Energy Alternatives” or, better yet, attend the Lemelson Center’s program Innovative Lives: A Conversation with Lonnie Johnson at the National Museum of American History on Thursday, February 2 at 6:30 p.m. Tickets are free; register at https://lemelsoncenter-innovativelives.eventbrite.com.