While the moonwalk is not actually a patented dance move, musician Michael Jackson does indeed hold a patent.

On March 25, 1983—30 years ago—Michael Jackson performed the moonwalk for the first time during his performance of “Billie Jean” on NBC’s Motown 25th anniversary special. While the move may have originated with James Brown, the moonwalk will forever be associated with Jackson, meaning you’ve probably seen headlines and Facebook statuses celebrating the 30th anniversary of the invention of the moonwalk.

Perhaps not surprisingly, the moonwalk is not literally a patented dance move. However, Michael Jackson does hold a patent. Awarded jointly to him and to two of his costume-men in 1993, the patent described specially designed shoes that gave the illusion of his leaning beyond his center of gravity. The move and the associated gadget were created for his 1988 music video, Smooth Criminal.

Shortly after Jackson’s passing in 2009, our director Art Molella wrote about his inventiveness:

"We shouldn’t be all that surprised by Jackson’s invention; he was a known technological enthusiast. Consider, for example, that widely publicized video arcade he installed at Neverland Ranch. Jackson was a gamer. Still, I was somewhat taken aback by reports that he once planned to build a 50-foot robot likeness of himself that would roam Las Vegas publicizing his acts, an image as much threatening as it was peculiar. That he not only invented but also sought and earned a patent is no mystery. Protecting an invention would come naturally to a man who zealously guarded his music rights and was reported to have acquired the copyrights to the Beatles’ songs. Then again, perhaps being certified by the US Patent and Trademark Office as a bona fide inventor conferred a kind of status and satisfaction that even Hollywood could not bestow."

As Art points out in that column, many other musicians and movie stars are also inventors:

“Jackson was far from the only 'patented' celebrity performer. For instance, his friend Marlon Brando also dabbled in invention, at least toward the end of his life when he earned several patents related to a device for tuning drumheads. One can envision him on some beach in Tahiti, turning out invention ideas to the beat of bongos. The ranks of improbable inventors also include two of the Marx brothers, who showed that even comic geniuses could take to the serious task of invention. Unlike Jackson’s and Brando’s, however, their inventions did not relate specifically to entertainment, at least not directly. Zeppo (Herbert), considered the mechanical genius of the family, patented a cardiac pulse-rate monitor, while Gummo (Milton) earned his patent for “Improvements in Packing-Racks,” something that undoubtedly came in handy for life on the road. 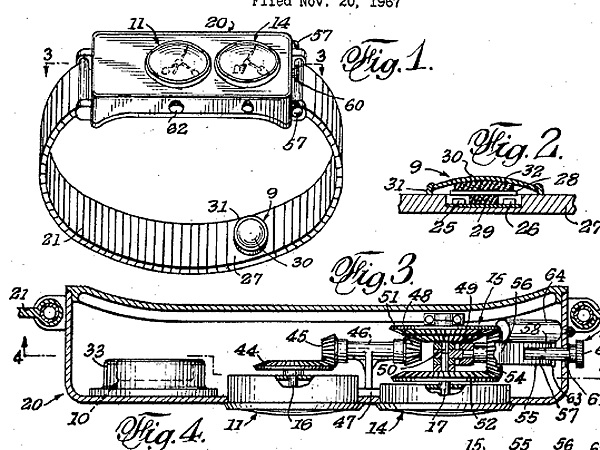 Patent drawing for a “method and watch mechanism for actuation by a cardiac pulse” filed by Zeppo Marx.

Patriotism motivated other performers. During World War II, the stunning Austrian-born movie star Hedy Lamarr approached her Hollywood neighbor, the avant-garde composer George Antheil, about contributing ideas to the National Inventors Council, established under the National Bureau of Standards to solicit inventions from US citizens for the war effort. She even thought of cashing in her acting career to become an inventor. Their 1941 patent for “frequency hopping” was applied to secret communications and to radio-guided torpedoes, among other weapons. Eventually, some of this technology found its way into Wi-Fi networking and wireless telephony.”

At the Lemelson Center, we believe that everyone is inventive—and as Michael Jackson, Zeppo, and Hedy Lamarr demonstrate, that includes the rich and famous.

Editor’s Note: This post quotes from a 2009 article by Art Molella titled “Notes from the Director: National Inventors’ Month.”