The first Innoskate event was epic in every regard. The National Museum of American History’s terrace facing the National Mall was transformed into a skater’s paradise complete with a mini ramp that provided the intellectual and physical focal point of the event. With the Washington Monument as a backdrop, the ramp served as a stage where skaters joined historians, educators, and other inventors to share ideas about what makes skateboarding an innovative and creative endeavor. The ramp also showcased the skaters’ athleticism and creativity with demonstrations that captivated the imagination of an international audience.

During Innoskate’s opening ceremony, Museum Director John Gray saluted skateboarding’s leading figures from the past, present, and future and declared that although “you represent a community that has been chased out of pretty much everywhere, today, we welcome you into the Smithsonian.”

Innoskate 2013 began with a special screening and discussion of Stacy Peralta’s film, Bones Brigade: An Autobiography. In this documentary about skateboarding in the 1980s—one of skate's most important and historic eras—we learn about influential innovations in tricks, the evolution of the technology of decks and wheels, the rise and ultimate failure of early skateparks, and most significantly, the dramatic innovations in marketing, branding, media production, and film that created a modern skateboarding identity and culture that spread around the world. These profound developments and new popularity were embodied and personified in the iconic Bones Brigade skateboarding team.

Following the film, skate pioneers and Bones Brigade team members Tony Hawk and Rodney Mullen offered their insights, feelings, and stories about the role of innovation in the Bones Brigade era in a question and answer session moderated by Miki Vuckovich, Executive Director of the Tony Hawk Foundation. In addition to appreciating their accomplishments as skaters, the film provides insight into the Bones Brigade as inventors and innovators, exploring imagination and ingenuity and what inspires us to create, to innovate, and to invent new things. It speaks about identifying and solving problems, taking enormous risks—in this case both physical and financial—and being resilient when inevitable setbacks and failures occur. In this film, Stacy Peralta offers significant insights about the important roles collaboration, mentorship, adaptability, friendly rivalries, and competition play in driving new ideas and new innovations.

Opening Ceremony and Donations to the National Collections

As part of the opening ceremony, Innoskate participants generously donated their prized and valued objects to the National Museum of American history, tripling the number of skateboard objects held in the national collections. The donations acquired during Innoskate represent the foundation of a broad collecting initiative to ensure that skateboarding’s history is recorded and preserved so it may be shared with future generations. Steve and Tony Hawk spoke eloquently about the meaning and significance for skateboarding to be recognized by the Smithsonian. The unquestioned highlight of the donation ceremony occurred when Steve and Tony presented the museum with Tony’s first skateboard—a 1975 Bahne fiberglass model, first owned by Steve, who then passed it on to his younger brother. Unexpectedly, and to the delight of the spectators, Tony grabbed his original board and took it for a ride on the museum's mini ramp. 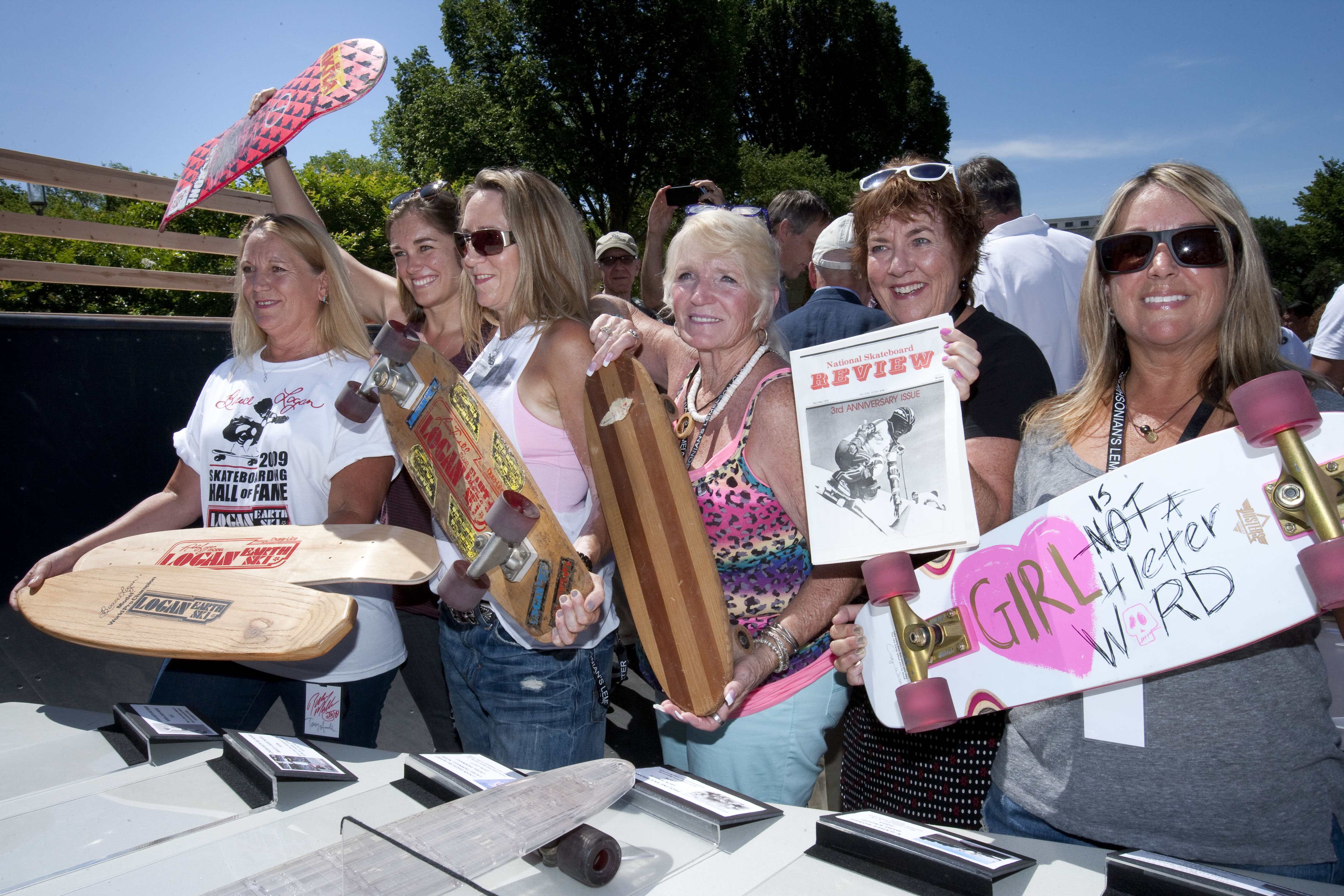 Panel Discussion and Skate Demo: Innovation and Progression of the Board

A core component of every Innoskate festival, this panel focused on how skaters spark innovations in skateboard design though their drive and determination to invent new tricks, navigate a variety of terrain and environments, and to continually push the boundaries of skateboarding. At the 2013 Innoskate event, Betsy Gordon from the National Museum of the American Indian teamed with Ryan Clements of TheBoardr to lead a conversation with skateboard designer, manufacturer, and innovator “Professor” Paul Schmitt, illuminating inventions in skateboard technology from the 1950s to the present. This panel highlighted the critical role of the skater as the primary innovator responsible for instigating advances in deck design and the use of new materials in the skateboard, wheels, and trucks in order to realize a creative vision.

Professional skaters Chris Haslam and Kyle Berard addressed the ways in which technology, design, and materials fundamentally impact what can be achieved on a skateboard. Skating on boards designed and manufactured in different decades, Chris and Kyle demonstrated how new innovations in skateboards enabled skaters to push their art in new directions. (They also showed what happens when you try to perform modern tricks on older boards that do not have modern design features such as noses and tails—the words "epic fail" came to mind.) 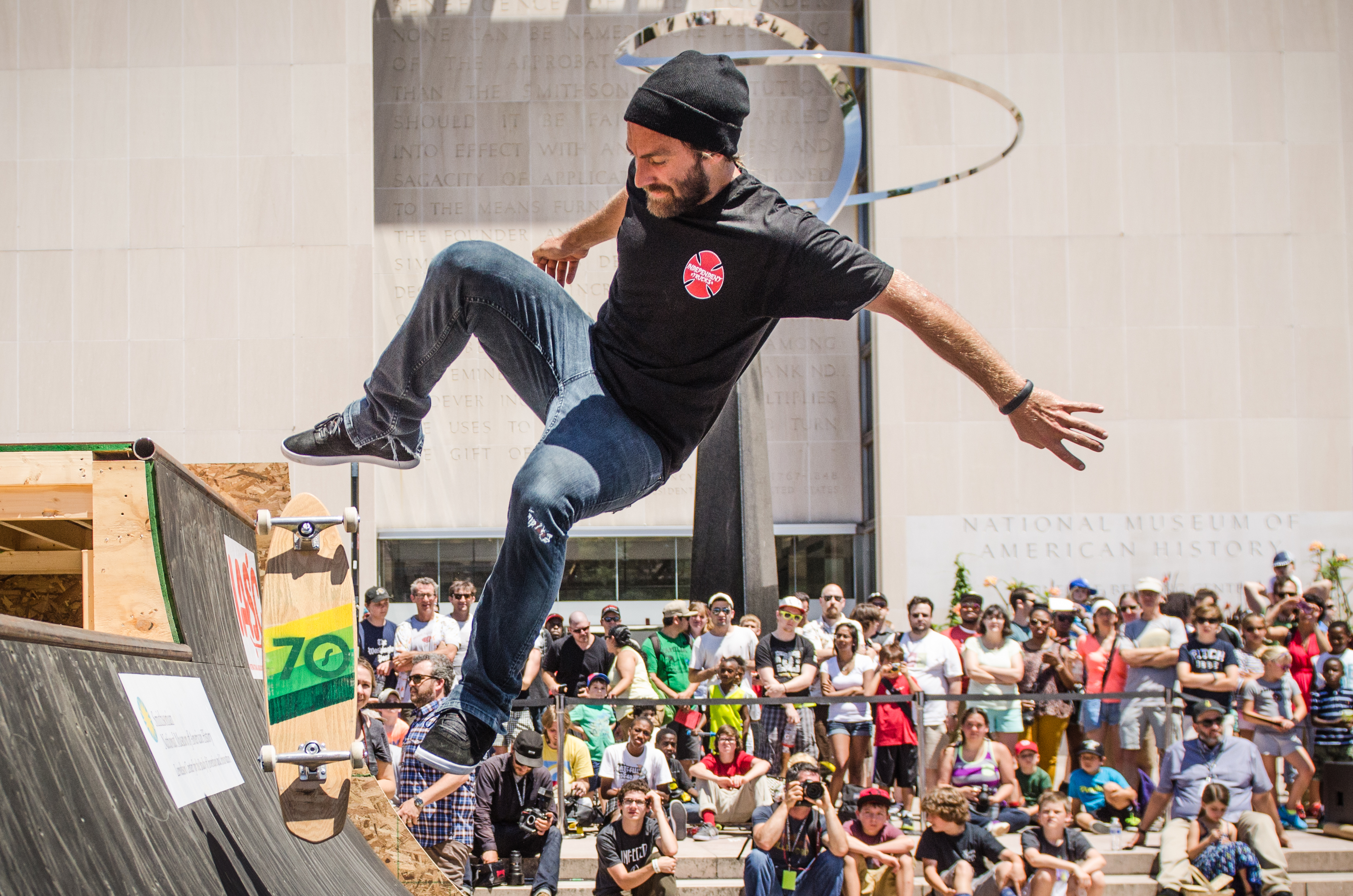 Professional skater Chris Haslam attempts to skate the miniramp on the 1970s era board.

In this very special panel, two of skateboarding’s most legendary and influential innovators, Tony Hawk and Rodney Mullen, shared their personal perspective on the invention and innovation of skateboarding tricks. Any listing of skateboarding’s most influential tricks is dominated by Tony’s and Rodney’s creations. Among these are Tony’s 540 Ollie, the Madonna, and, of course, the 900, which brought vert skating into the homes of mainstream America and made Tony a transcendent figure in American sports. Similarly, Rodney’s Flatground Ollie formed the basis of modern street skating, while tricks like the Kick Flip and the HeliPop elevated it to new heights.

As with any significant invention, once we see the fully executed product, it is easy to think of it as inevitable or natural. In skateboarding today, it is commonplace to see skaters flying ever higher out of ramps as they perform intricate and complex maneuvers. Similarly, we now see skaters navigating the built terrain by using their boards to jump, slide, grind, and flip their way through the urban landscape. We take such innovations in skateboarding tricks for granted because innovators like Tony and Rodney achieved what was once thought impossible and pushed skateboarding’s boundaries. They redefined the very meaning of skateboarding in the air and on the street. In their conversation with Jeffrey Brodie of the Lemelson Center, Ryan Clements of TheBoardr, and Chris “Dune” Pastras, Tony and Rodney offered a rare opportunity to hear their personal insights on their creative processes.

The third panel at Innoskate 2013 focused on innovations in skate style and culture from the early days when skateboarders often rode barefoot to today, when skate footwear and fashion form the core of a billion-dollar worldwide industry. Sales from shoes and apparel far outweigh earnings from skateboards and have become the dominant source of revenue for all major skate brands. Innovations in skate footwear and fashion have emerged as a driving force not only in skate culture but in mainstream fashion and culture as well. As with other segments of skateboard culture, skaters have been at the forefront of change in specially designed and engineered skate shoes and clothing. 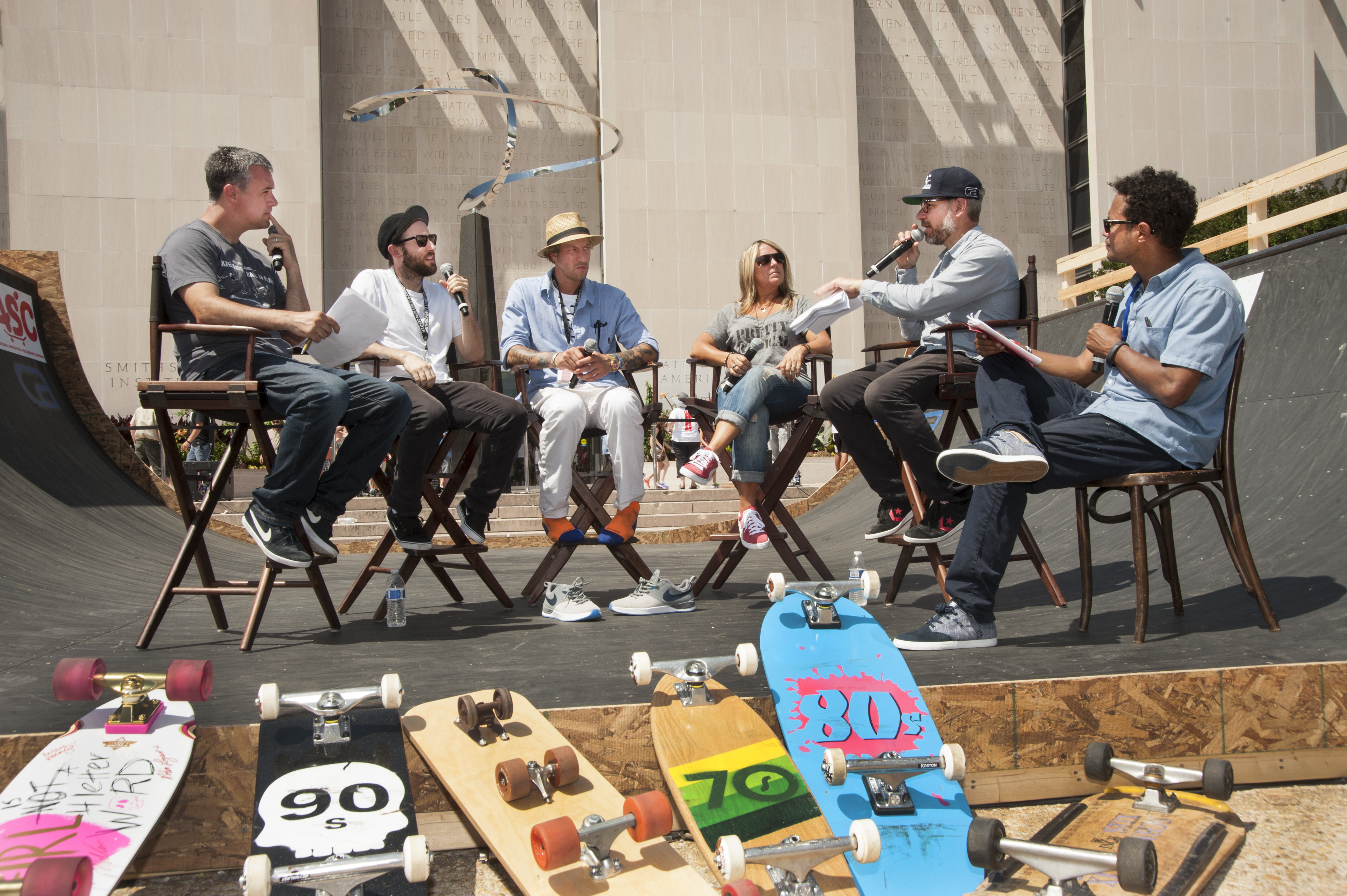 Betsy Gordon of the National Museum of the American Indian and Josh Friedberg of the International Association of Skateboard Companies were joined by leading experts and innovators of skate fashion and shoe design: Brian Carboy, skate shoe designer for Nike; Cindy Whitehead, 1970s professional skateboarder and sports stylist; and Brian Anderson, current professional skateboarder. Together, they shared their insights about the significance of footwear and fashion in skate culture and its broader impact worldwide.

In contrast to the first three panel discussions at Innoskate 2013 that looked back at the the influence of inventions, innovations, and innovators that created modern skateboarding, the concluding session shifted its focus toward the future. The panelists for this final session represented the incredible breadth and reach of skate culture worldwide: Josh Friedberg, Executive Director, IASC; professional skater and X Games Champion Mimi Knoop; Skatetistan Global Strategic Advisor Bryan Ridgeway; Miki Vuckovich, Executive Director of the Tony Hawk Foundation; and Jim Murphy, founder of Wounded Knee Skateboards and Co-Director of the Stronghold Society.

In this conversation moderated by Jeffrey Brodie of the Lemelson Center, the panelists offered their insights and perspective on the key issues that will shape the future of skateboarding, including the state of the skateboard industry; increasing participation and diversity in skateboarding, particularly among women; navigating and improving relationships between skaters and their surrounding communities; skateboarding as a tool for positive change by social innovators around the world; and how the possible inclusion of skateboarding as an Olympic sport promises to promote its growth worldwide, but threatens to erode skate culture's core values. As the conversation revealed, invention and innovation will always be integral to pushing skate into the future.

Film and Discussion: Waiting for Lightning

Innoskate 2013 concluded with a viewing of Waiting for Lightning. This powerful documentary on the life and career of Danny Way, Waiting for Lightning asks many critical questions: Where is skateboarding moving in the future? What defines skateboarding? What are its limits and where are its boundaries? As the film reveals, Danny Way is not the only one who is asking these questions on behalf of the skate community, but ultimately, he took it upon himself to answer them in extraordinary fashion. 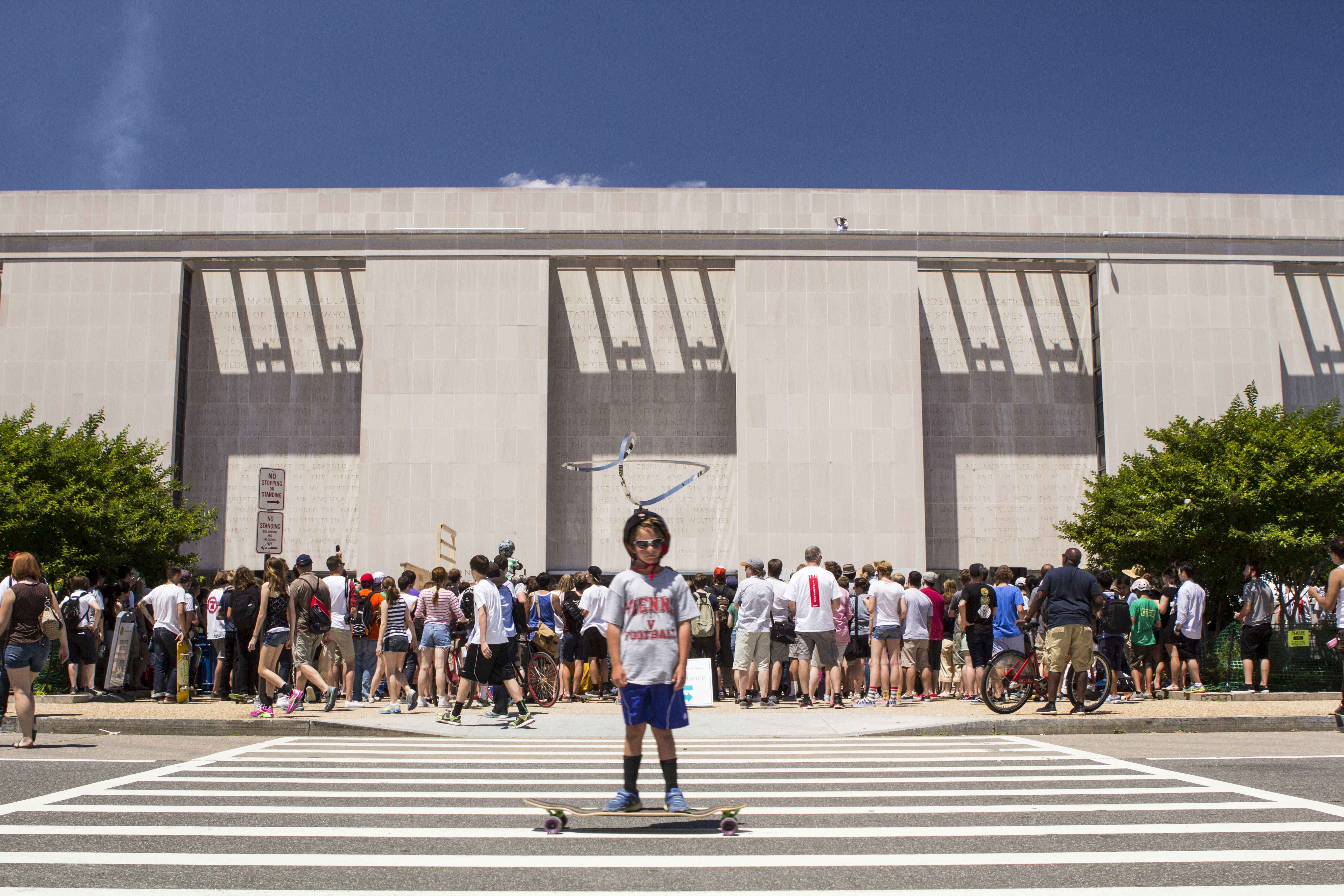