Innoskate festivals in 2014 featured a bi-coastal celebration of innovation in skate culture with integrated events at the Polk Museum of Art in Lakeland, FL (June 20-21, 2014) and at the Museum of History and Industry (MOHAI) in Seattle (August 16, 2014). Though joined in spirit and content, the programs at each venue reflected the specific interests of each museum and its community.

Innoskate at the Museum of History and Industry approached the exploration of history, invention, and skateboarding from a distinctly “Seattle” perspective and reflected the city’s well-earned reputation for innovation, civic-mindedness, and social action. Under a clear blue sky on a warm August day, with the Space Needle watching over the festivities, the public was treated to a free skate clinic at the museum as advanced skaters tested their skills on obstacles in the adjacent Lake Union Park. Seattle skate legend Marshall Reid took spectators on a journey through the past as he discussed evolutions and innovations in the history of the skateboard as Seattle skaters performed tricks from earlier eras.

Discussion panels inside the museum featured conversations with local innovators about skateboarding as a way to promote female leadership and empowerment; the intersection of local Native American culture, art, and skateboarding; and the importance of terrain in the creation of Seattle’s citywide skatepark system. A skate fashion show for children, skate art projects facilitated by members of the Tulalip Tribe, Seattle skate history and skatepark design exhibitions, and other presentations offered a full range of activities for visitors. This incredible event concluded with a best trick contest using the back stairs of the museum on the edge of Lake Union. Many thanks to MOHAI program coordinators Julia Swann, Tara McCauley, and the entire staff of the museum for their efforts in developing a program that highlighted the unique qualities of Seattle and its skate community. 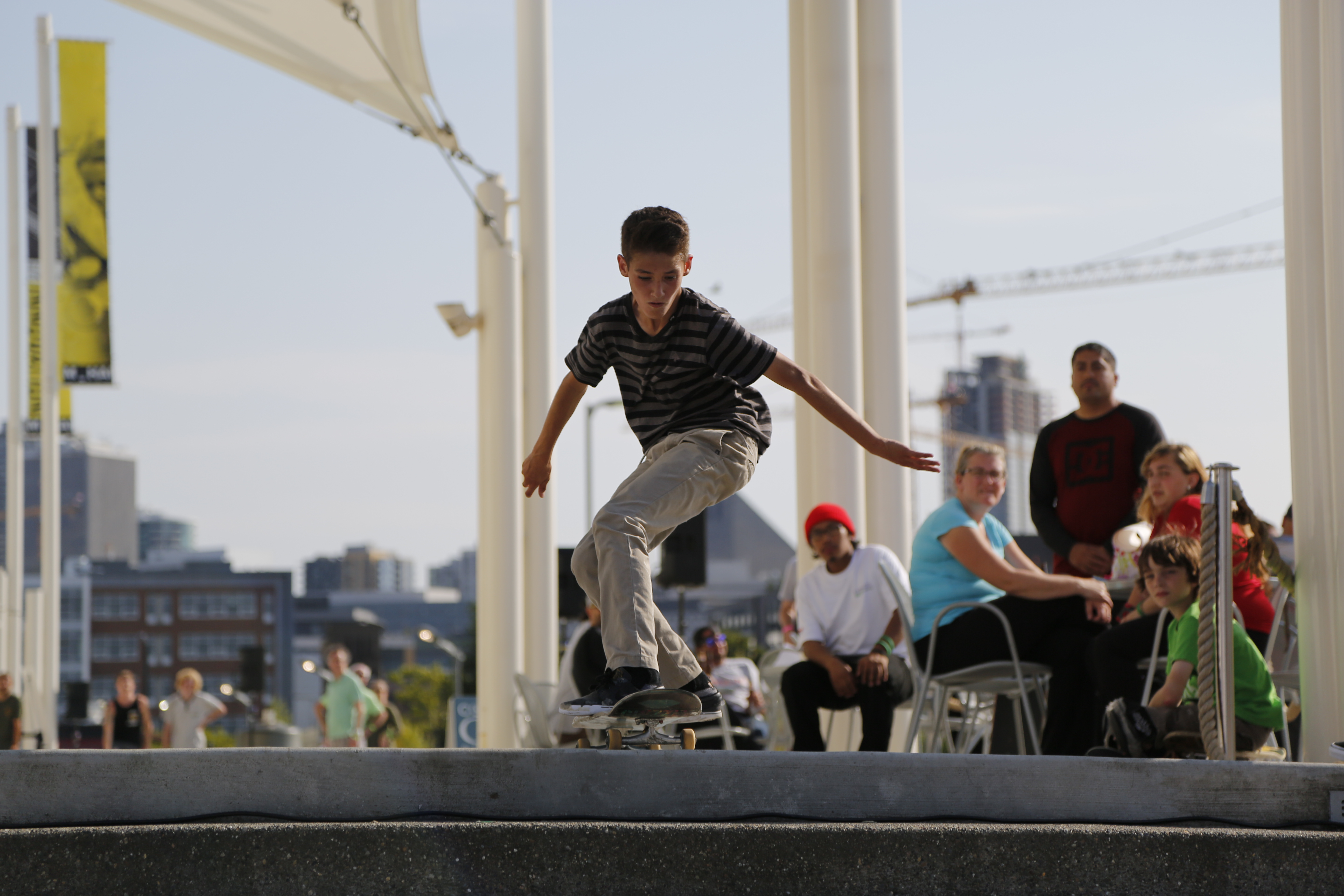 An entrant in the best trick contest.

Panel Discussion: Innovation and Progression of the Board and the History of Skateboarding in Seattle

Seattle skate leader Marshall Reid took spectators on a journey through the past, discussing evolutions and innovations in the history of the skateboard as Kristin Ebeling and other Seattle skaters performed tricks from earlier eras. A featured program at every Innoskate festival, this panel focused on how skaters spark innovations in skateboard design though their drive and determination to invent new tricks, navigate a variety of terrain and environments, and continually push the boundaries of skateboarding. Marshall focused especially on the many influential Seattle skaters who have made contributions to the skate community nationwide.

In this panel, Nancy Chang and Kristin Ebeling of the Skate Like a Girl organization (SLAG), discussed the power of skateboarding to effect social change. SLAG is a unique organization that provides an innovative educational approach to female empowerment and leadership while promoting women’s skateboarding. SLAG seeks to create a collective of girls and women who strive for social justice through skateboarding and other activities. Nancy and Kristin discussed social challenges facing young women and SLAG’s efforts to provide the tools and confidence necessary to combat them. They also talked about their own experiences in meeting the challenge of being women skaters in male-dominated skate culture. The panel concluded by considering the special and distinct aspects of Seattle’s culture that made the city receptive to such a grassroots organization.

Louie Gong (Nooksack) is Canadian artist, activist, and educator who merges traditional Coast Salish art with influences from the urban environment to make strong statements about identity. Louie is a self-taught artist who began in making art in 2008. He is known for his hand-drawn custom shoes (Converse and Vans), skate decks, and for contributing murals to local skateparks.

In this conversation, Louie shared his perspective and ideas on creativity, artistic expression, innovation, and the role of community in both Native American and skateboard culture. In what ways are the creative and inventive processes in art and skating similar? In what ways are they different? The discussion concluded by considering how art serves as a connection point between Native American and skateboarding culture.

Panel Discussion: Innovations in the Use of Terrain and Skatepark Design—The Importance and Influence of Where Skaters Skate

Skaters view the world from a different and distinct perspective as they constantly use their creativity and imagination to navigate the built environment around them. How and where skaters skate, or “navigable terrain,” is immensely important to the skate community, often inflaming tensions between skaters and their larger community. In this concluding session, Micha Shapiro, skatepark designer for Seattle-based Grindline Skateparks, and Seattle community and skatepark advocate Matthew Lee Johnston discussed why terrain is so critical to the skate community, how innovations shape the design and engineering of skateparks, and how Seattle overcame significant challenges and created the nation’s first citywide skatepark system.

Innoskate 2014 created a special “Northwest / Southeast” connection that explored skateboard culture in new and unexpected ways, brought new audiences and communities together for intergenerational learning opportunities, strengthened collaborations among the Smithsonian Institution, the Lemelson Center, and Smithsonian Affiliate institutions, and broadened the public’s appreciation of the role and purpose of museums in local communities.