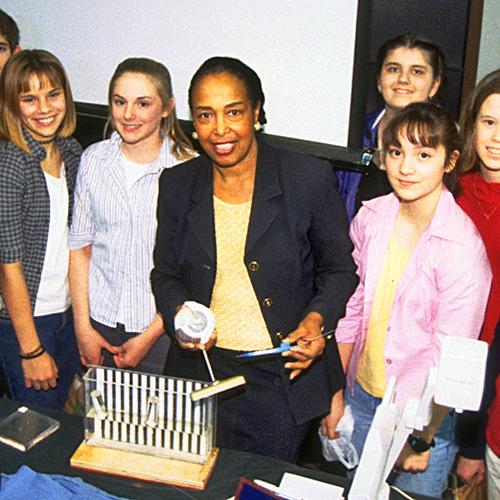 Join the Smithsonian’s Lemelson Center for the Study of Invention and Innovation for a week-long webinar series drawing renewed attention to historic and contemporary inventors of color and Black technology consumers, while discussing strategies for building a more equitable innovation ecosystem.

Anthea M. Hartig is the Elizabeth MacMillan Director of the Smithsonian’s National Museum of American History and the first woman to hold the position since the museum opened in 1964. Dr. Hartig oversees 257 employees, a budget of more than $40 million, and a collection that includes 1.8 million objects and more than 3 shelf-miles of archives. Before joining the Smithsonian in 2019, she served as the executive director and CEO of the California Historical Society in San Francisco. She earned her doctorate and master’s degrees in history at the University of California, Riverside, her bachelor’s degree at the University of California, Los Angeles, and studied as an undergraduate and graduate student at the College of William and Mary.

Arthur Daemmrich is the Director of the Lemelson Center for the Study of Invention and Innovation at the Smithsonian Institution. He has led research projects into the history of pharmaceutical innovation and regulation, chemical risk, and healthcare systems, and is currently researching the history of industrial revolutions. Dr. Daemmrich has published in the fields of science and technology studies, history of technology, medical sociology, and business policy. Previously an Associate Professor at the University of Kansas, Assistant Professor at Harvard Business School and a Visiting Professor at the China Europe International Business School, Daemmrich holds a PhD from Cornell University and a BA from the University of Pennsylvania.

Lisa D. Cook is Professor of Economics and International Relations at Michigan State University. She earned a PhD in economics from the University of California, Berkeley with fields in macroeconomics and international economics. Among her current research interests are economic growth and development, innovation, financial institutions and markets, and economic history. Dr. Cook is a Research Associate at the National Bureau of Economic Research and is the author of several published articles, book chapters, and working papers. Dr. Cook is currently the Director of the American Economic Association Summer Program and was recently named an Edison Fellow at the US Patent and Trademark Office. During the 2011–2012 academic year, she served on the White House Council of Economic Advisers under President Obama.

Dr. Grandison works at the intersection of technology, data, and social good. He has spent the last two decades developing and deploying data-driven, impact-focused, people-centered products and services that improve the lives of underrepresented, and often ignored, American communities. Grandison holds multiple Chief Technology positions at Pearl Long Term Care Solutions Inc, the TeleHealth Market, and MStreetX. He is also the Board Chairman of the Data-Driven Institute, which is a public health nonprofit that helps policymakers create and implement effective programs and policies to solve their most critical problems, using the knowledge of the community, data, and technology. Dr. Grandison is also a 2018 Zhi-Xing Eisenhower Fellow. a Political Partner of the Truman National Security Project, and a Human Rights Commissioner for the city of Seattle.

James Holly, Jr., PhD is a native Detroiter, educator, and researcher who is focused on mitigating anti-Blackness in P-20 STEM education. He is currently an Assistant Professor of Urban STEM Education in the Teacher Education Division at Wayne State University. His research explores the complexities of teaching STEM disciplines in an urban context in pursuit of equity and justice, the process of developing engineering-literacy among pre-service science and mathematics teachers, and how the personal narratives of Black people with STEM degrees can inform equitable STEM education.

Shontavia Johnson, JD, thrives at the intersection of law, entrepreneurship, and culture. Twice named one of the top lawyers in America, Ms. Johnson serves as Associate Vice President for Entrepreneurship and Innovation at Clemson University. She has also founded LVRG, a company giving women of color an entrepreneurship formula that allows them to make impact and income by leveraging intellectual property. Johnson has spoken on stages at TEDx, SXSW, and Google, and has appeared in TIME, the Washington Post, the Los Angeles Times and on NPR and the podcast Hear to Slay. She is a widely published writer who also loves extreme sports and traveling.

Charlton McIlwain is Vice Provost for Faculty Development & Engagement at New York University, and Professor of Media, Culture, and Communication at NYU Steinhardt. He is the author of Black Software: The Internet & Racial Justice, From the Afronet to Black Lives Matter (Oxford University Press, 2019). His work focuses on the intersections of computing technology, race, inequality, and racial justice activism. Dr. McIlwain has served as an expert witness in landmark US Federal Court cases on reverse redlining/racial targeting in mortgage lending, and has testified before the US House Committee on Financial Services about the impacts of automation and artificial intelligence on the financial services sector. He writes regularly for outlets such as The Guardian, Slate's Future Tense, and MIT Technology Review about the intersection of race and technology.

Tahira Reid Smith is an Associate Professor in the School of Mechanical Engineering at Purdue University and a NASA Visiting Scholar for Fall 2020. Her research involves the quantification and integration of human-centered considerations in engineering systems and/or the design process.  Dr. Reid Smith's research program has received funding from the National Science Foundation, Procter & Gamble, Air Force Office of Scientific Research, and many others. Her projects involving the intersection of diversity and mechanical engineering have been featured in media sources including National Geographic, NBC's Today Show, Essence magazine, Reuters, National Public Radio and many others. A highly sought out role model for the younger generation, Dr. Reid Smith's story about her double dutch jump rope invention is featured in two children's books and was on the 2017 New York State English and Language Arts Common Core Exam administered to over 100,000 4th graders. Dr. Reid Smith obtained BS and MS degrees in Mechanical Engineering from Rensselaer Polytechnic Institute and a PhD in Design Science from the University of Michigan, Ann Arbor.

Amy E. Slaton is a historian of science, technology and engineering at Drexel University. She holds a PhD in the History and Sociology of Science from the University of Pennsylvania, and has written on the ways in which instrumentation, metrologies, and standards reflect historical conceptions of human difference in technoscientific education and labor. Dr. Slaton is the editor of New Materials: Towards a History of Consistency (Lever Press, 2020) and is currently writing a critical history of STEM diversity in the United States as a project of racial reconciliation rather than redistributive or reparative action. She is also co-editor, with Tiago Saraiva, of the journal, History + Technology.

Kara W. Swanson is Professor of Law and Affiliate Professor of History at Northeastern University in Boston. Her scholarship focuses on the historical intersections among law, science, medicine, and technology, concentrating on the United States patent system, the regulation of reproduction and the body, and issues of race, gender, and sexuality. Her first book, Banking on the Body: The Market in Blood, Milk and Sperm in Modern America (Harvard University Press, 2014), is a history of property in the human body, as understood through the twentieth century history of bankable body products. Dr. Swanson's book-in-progress is tentatively titled Inventing Citizens: Race, Gender, and Patents.

Yolanda L. Comedy is an independent consultant working on science, technology, engineering and mathematics (STEM) policy issues, including the STEM workforce; cybersecurity; and business strategy. Previously, she was the Director of the American Association for the Advancement of Science (AAAS) Center for Advancing Science & Engineering Capacity, where she directed several programs, including the AAAS-Lemelson Invention Ambassadors Program, Mason Award, and Mentor awards. Dr. Comedy also worked for the White House as a Senior Policy Analyst for both the President’s Committee of Advisors on Science and Technology and the President’s Information Technology Advisory Committee; and at IBM, working in strategic philanthropy, governmental programs and business consulting on issues such as K-12 education reform; high-performance computing and US competitiveness; and business strategy. Dr. Comedy obtained her PhD from Indiana University in Political Science, specializing in public policy and international development.

Eric S. Hintz is a historian with the Lemelson Center for the Study of Invention and Innovation at the Smithsonian’s Institution’s National Museum of American History. Dr. Hintz curates exhibits, including the award-winning Places of Invention; produces the Center’s annual symposium series, New Perspectives on Invention and Innovation; coordinates the Center’s fellowship and grant programs; and assists in the collection of historically significant artifacts and documents. With Matthew Wisnioski and Marie Stettler Kleine, Dr. Hintz is the co-editor of Does America Need More Innovators? (MIT Press, 2019), and he is the author of the forthcoming American Independent Inventors in an Era of Corporate R&D (MIT Press, 2021). Dr. Hintz earned his MA and PhD in the history and sociology of science from the University of Pennsylvania.

Cathleen Lewis is Curator of International Space Programs and Spacesuits at the Smithsonian Institution’s National Air and Space Museum, specializing in Soviet and Russian history. Dr. Lewis holds bachelor’s and master’s degrees in Russian and East European Studies from Yale University and completed her PhD in History at the George Washington University. Her current research project is a reexamination of cosmonaut culture in the last six decades. She also studies and curates the histories of astrobiology and Blacks in aviation and spaceflight in the United States and abroad. Dr. Lewis has written about artifacts in the Smithsonian’s collection and comparisons of Soviet and American approaches to exhibiting and portraying spaceflight, and is planning to write a history of the development of spacesuit gloves.

Crystal M. Moten is Curator of African American History in the Division of Work and Industry at the Smithsonian’s National Museum of American History, where she specializes in African American business and labor history. Previously, Dr. Moten has been an assistant professor of history at small liberal arts colleges on the east coast and in the upper Midwest. Her current research centers on the intersection of race, class, and gender and specifically Black women’s economic activism in the civil rights era in the urban Midwest. Her work has appeared in several journals and edited collections.

Monica M. Smith, Head of Exhibitions and Interpretation, Lemelson Center for the Study of Invention and Innovation, National Museum of American History

Monica M. Smith is the Head of Exhibitions and Interpretation for the Smithsonian's Lemelson Center for the Study of Invention and Innovation She oversees conceptual and logistical planning for exhibitions, including serving as project director, principal investigator, and co-curator for the in-progress Game Changers exhibition, the award-winning Places of Invention exhibition currently on view at the National Museum of American History, and the earlier award-winning Invention at Play traveling exhibition, all three of which received prestigious $1.5-3M grants from the National Science Foundation (NSF).