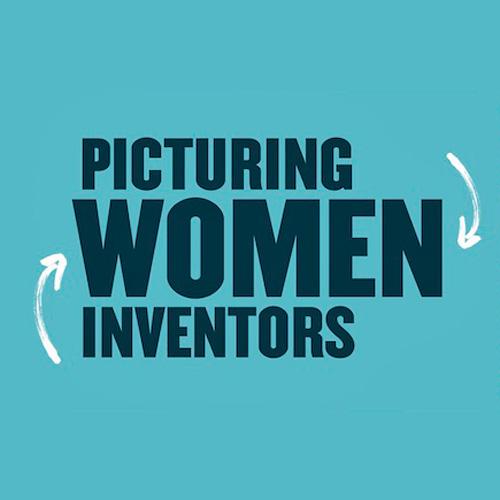 In 2020, the Center pivoted much of its work to the digital realm to serve our audiences.

We will continue to change how the public understands the role of invention in their daily lives and inspire people to expand their inherent capacity for creativity and inventive thinking. 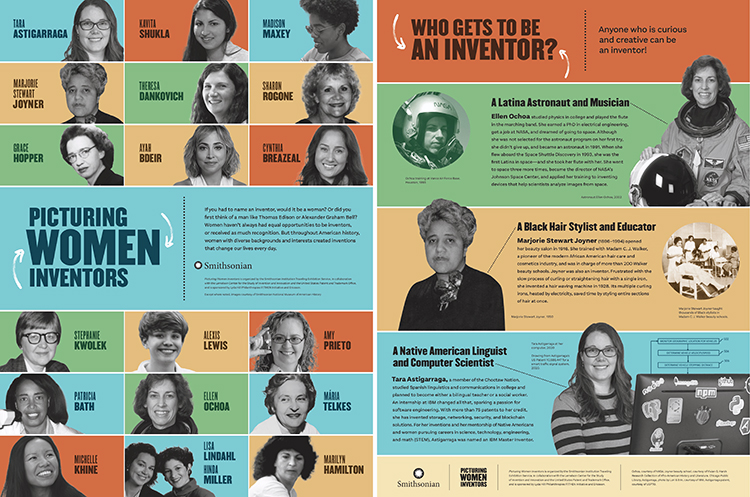 Picturing Women Inventors will be available as a set of eight posters in 2021. Courtesy of SITES

In early 2021, the Lemelson Center will debut a poster version of Picturing Women Inventors, highlighting the distinctive motivations, challenges, and accomplishments of 19 exceptional 20th- and 21st-century women, who are diverse both personally and professionally. The set of eight posters will be made available at no cost to approximately 6,000 schools, libraries, museums, historical societies, and community centers across the United States.

While the poster exhibition will reach audiences of all ages, the design and text are targeted to youth in grades 5–9 to inspire young people (especially girls) to see themselves as future inventors. Educational and web-based materials accompany the posters.

Picturing Women Inventors is organized by the Smithsonian Institution Traveling Exhibition Service in collaboration with the Lemelson Center for the Study of Invention and Innovation and the United States Patent and Trademark Office and is sponsored by Lyda Hill Philanthropies IF/THEN Initiative and Ericsson.

The Game Changers (GC) project team is looking forward to a busy and productive year in 2021. By the end of February, we will wrap up the Schematic Design phase, during which we moved from initial concepts to honing the design and content, always with our GC priority audiences (girls and Black youth ages 10-17 and people with disabilities) foremost on our minds. We will then move into the Design Development phase where we will incorporate feedback from museum leadership, advisors, and our initial testing with priority audiences. We will continue to develop engaging stories using an appealing array of narratives, objects, graphics, videos, and interactive experiences around inventors, athletes, and sports.

We will collaborate with RKA project evaluators to test GC visuals and content with targeted focus groups in March, working with our local community partners. Through it all, we will be conducting content research in our museum collections and other repositories, honing design approaches, planning interactive visitor experiences, talking to featured inventors and athletes as well as potential object lenders and donors, consulting with internal and external advisors, and actively fundraising for the GC project.

In 2021, our award-winning Innovative Lives program series goes virtual with a mix of monthly online panel discussions and one-on-one interviews with diverse inventors, innovators, and entrepreneurs.

January 13: Celebrating 25 Years of Innovative Lives, featuring Innovative Lives alumni Mike Augspurger (One-Off Handcycle), Lonnie Johnson (Super Soaker and high-efficiency batteries), Tiffany Kelley (Nightingale Apps for nurses), and the Lemelson Center’s resident inventor, Tim Pula. Panelists will discuss how their inventive processes have changed over time and have been affected or inspired by the COVID-19 crisis and quarantine. Monica Smith, the Lemelson Center’s head of exhibitions and interpretation, will moderate the discussion.

February 10: Jessica O. Matthews, founder and CEO of Uncharted Power,  works at the intersection of disruptive technology, renewable energy, and human behavior. She will talk with moderator Monica Smith about her background and inventions leading to 12 patents, starting with her first invention, at the age of 19, called the SOCCKET, an energy-generating soccer ball.

March 10: “My Inventor Dad” will feature filmmakers Rob Lemelson and Cindy Yoon sharing stories and clips from their documentaries about Jerome Lemelson and InBae Yoon, their famous inventor-fathers. Lemelson Center director Arthur Daemmrich will moderate a discussion about their fathers’ inventive processes, inspirations, and challenges, as uniquely seen through the eyes of their families.

April 14: Marilyn Hamilton, co-inventor of the Quickie Wheelchair, will speak with museum curator Katherine Ott about her life as an athlete and inventor. Following a hang-gliding accident in 1978, Hamilton worked with two friends to  invent a lightweight, highly maneuverable wheelchair, which she then used to play championship wheelchair tennis. Hamilton co-founded Motion Designs to manufacture the wheelchairs, sold today under the brand name Quickie.

May 12: Sarah Will, Paralympic skier and accessibility advocate, and Mike Schultz, inventor of the Moto Knee and Versa Foot, will talk with the museum’s sports curator Jane Rogers about their respective careers and overlapping interests in advocacy for accessible sports and the history of and ongoing technology innovations in adaptive skiing and snowboarding.

In August, the next book in the Lemelson Center Studies in Invention and Innovation series will be released by MIT Press. Written by Lemelson Center historian Eric S. Hintz, American Independent Inventors in an Era of Corporate R&D examines how America's individual inventors persisted alongside corporate R&D labs as an important source of inventions.

During the nineteenth century, heroic individual inventors such as Thomas Edison and Alexander Graham Bell created entirely new industries while achieving widespread fame. However, by 1927, a New York Times editorial suggested that teams of corporate scientists at General Electric, AT&T, and DuPont had replaced the solitary “garret inventor” as the wellspring of invention. But the independent inventors never disappeared.

Focusing on the years from 1890 to 1950, Hintz documents how American independent inventors competed (and sometimes partnered) with their corporate rivals, adopted a variety of flexible commercialization strategies, established a series of short-lived professional groups, lobbied for fairer patent laws, and mobilized for two world wars. By recovering the stories of a group once considered extinct, Hintz shows that independent inventors have long been—and remain—an important source of new technologies.

The Invent It Challenge will celebrate its 10th anniversary in 2021, inviting young inventors to become game changers by creating an invention that makes sports more exciting, fun, fair, or safe for all. Individuals and teams across four age cohorts (ages 5-7; 8-10; 11-13; and 14-21) will receive inspiration and “virtual coaching” from Shawn Springs, a recently retired NFL player who became an inventor and entrepreneur. Shawn's company, Windpact, creates safer helmets that reduce impact injuries.

With generous sponsorship from the Yoon family, and in partnership with Cricket Media, the Invent Challenge celebrates young inventors and honors the inventive legacy of Dr. InBae Yoon, a Korean American physician whose love of drawing, tinkering, and prototyping led to more than 200 US patents. Dr. Yoon believed everyone is inventive, and the Invent It Challenge continues to inspire the next generation of innovators.

As part of a broader set of initiatives underway to highlight and help reform systemic inequalities in invention and innovation, the Lemelson Center will launch “Inspiring STEM Pathways: Contemporary Black Inventors as Role Models for the Next Generation,” creating a series of videos featuring Black inventors working in American manufacturing firms.

Research shows that for Black and other minority youth, affinity for and confidence in STEM tend to drop precipitously during middle and high school. Highlighting daily inventive work and first-person perspective, Black inventors will speak about their work, interests, and the challenges they have encountered and how they overcame them. The “Inspiring STEM Pathways” videos will present role models, document the real-world applicability of STEM knowledge, and help motivate Black youth to pursue further education and careers in industries poised for growth through innovation. The project has received generous seed funding from ConocoPhillips.