Figure 1 of US Patent 1,242,872 depicts a perspective view of the "self serving store" patented by Clarence Saunders in 1917. Courtesy of USPTO

May 5, 2020 by D. Lawrence Tarazano and Arthur Daemmrich

The return of an invention from the 1910s.

Navigating a supermarket today is strikingly different than only three months ago. Store layouts designed over the past 100 years encouraged shoppers to browse the shelves and purchase not only what they came for but also other impulse items. In all but the smallest stores, aisles provided sufficient room for people to pass each other. However, none were expected to offer the full six feet of space between people needed to allow for the “social distancing” that is now recommended worldwide due to the novel coronavirus.

Supermarkets are currently rethinking how to safely control both the number of shoppers allowed in the store at one time as well as how customers navigate the floorplan while shopping. It has become clear that it is very difficult for one shopper to stay a safe distance away from other shoppers as they pass each other in the aisles.

One solution—implemented by some big retailers, including Walmart, Kroger, and Giant Food in April 2020—is one-way aisles. But this is not a new concept. Many Americans in the south and parts of the Midwest are familiar with Piggly Wiggly supermarkets, but few realize that the chain was a pioneer of one-way aisles. 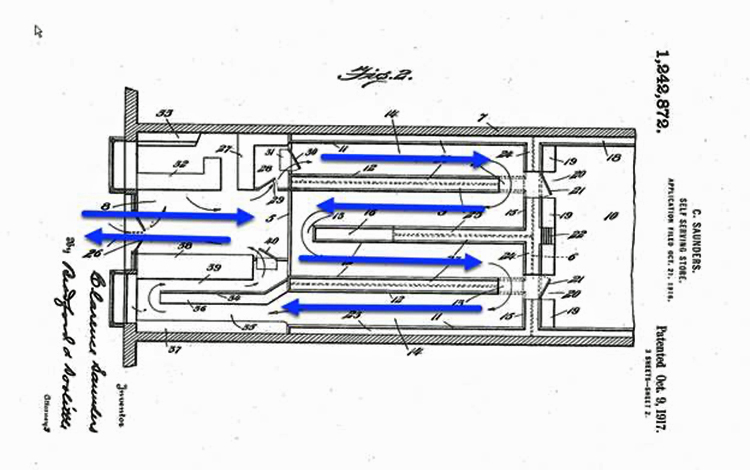 The one-way aisles in the "self serving store" patented by Clarence Saunders in 1917 are clearly illustrated in Figure 2 of US Patent 1,242,872. Courtesy of USPTO

Clarence Saunders opened his first Piggly Wiggly in September 1916 in Memphis, Tennessee. A month later, he submitted a patent application for a “Self Serving Store,” and was granted US Patent 1,242,872 in 1917. Saunders explained in his patent that the customer “will be enabled to serve himself and, in so doing, will be required to review the entire assortment of goods carried in stock, conveniently and attractively displayed.” Prior to Saunders’s invention of a self-service store with lanes, carts, and a central check out, a customer was waited on by the “grocer” behind the counter for all their shopping needs. At the time, people typically also shopped at butchers for their meat, fishmongers for seafood, green grocers for fresh fruits and vegetables, and bakeries for breads and other baked goods.

The Piggly Wiggly offered a wider range of products than had been found at dry goods stores alone, required fewer staff to run, and made shopping far more time efficient. Saunders’s store had an entrance, an exit, and a single one-way path (similar to a modern IKEA, but without any cut-throughs). Saunders also pioneered new arrangements of products, famously positioning candy at the checkout counter to encourage impulse purchases.

Other supermarkets expanded on the Piggly Wiggly concept. Notably, the King Kullen store that opened in 1930 in Queens, New York, was designed as more of a warehouse experience on the city outskirts. King Kullen had separate departments, customer self-service, discount pricing, chain marketing, and operated as a high volume, low margin business. Grocers with names still recognizeable today, such as Safeway and Kroeger, soon adapted the King Kullen layouts and operations.

Supermarkets expanded in size during the Great Depression and World War II, even as thousands of small grocery stores closed. After the war, chains were fast to build new stores in proximity to growing suburbs. Initially an American development, supermarkets drew international attention in the 1950s and 1960s. For example, during a 1957 visit to the United States, Queen Elizabeth specifically asked to visit a supermarket during her first visit to the country, stopping at a Giant supermarket in Hyattsville, Maryland.

Other innovations followed on Saunders’s patent—shopping carts, branded foods with labels targeting the general customer, barcode readers, loyalty cards, self-checkout, and efforts to personalize advertising, among others. Yet the flow of people through a supermarket store was largely standardized by the early 2000s. Designs worldwide feature fresh produce at the entry, and discrete “store magnets” of deli counters, baked goods, seafood, other meats, and dairy positioned around the perimeter to encourage shoppers to pass through the interior aisles to shop for dried goods, processed foods, confectionary, and frozen foods.

So everything old is new again and stores are starting to make aisles one-way, as they did in the late 1910s when the supermarket was invented. Since Saunders’s patent expired a long time ago, any store can take advantage of this practice. Supermarkets are also rethinking their business in other ways. For example, Kroeger is repurposing a sensor-and-data-analysis-driven technology called QueVision, introduced nearly a decade ago. Originally built to shorten checkout line wait times, QueVision is now being used to monitor the number of customers in a store and manage capacity. The adoption of other industry-wide innovations, like designing for linear movement instead of “islands,” or shifting away from self-serve to online ordering and curbside pickup, will depend on many factors, especially consumer behavior. It will be interesting to see what innovations are put forward in coming years, and which ones are welcomed and adopted by the public.

D. Lawrence Tarazano is a frequent contributor to the Smithsonian Institution on patent related topics. He double majored in biology and chemistry at Hartwick College in Oneonta, NY, followed by graduate studies in organometallic chemistry at Rensselaer Polytechnic Institute in Troy, NY.

Arthur Daemmrich is the Jerome and Dorothy Lemelson Director at the Smithsonian Lemelson Center for the Study of Invention and Innovation. 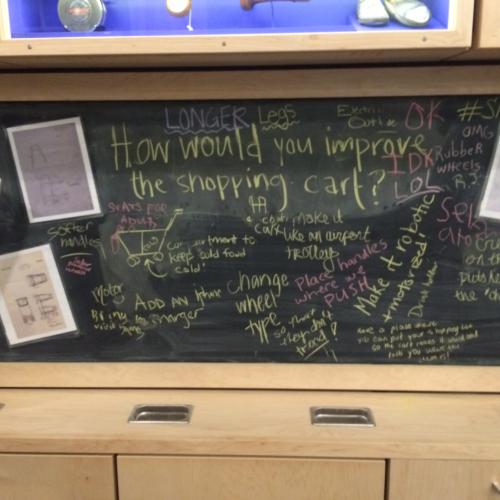 The first shopping cart was patented in 1940 and was reinvented in 1946. We are challenging our young inventors in Spark!Lab to update it for the 21st century.