A camera, some mirrors, a projector, a screen, and a calculator combined for made-to-measure clothing tailored “PhotoMetriCally.”

In the early 1940s, Henry Booth, a textile jobber and President of Amalgamated Textile Limited, realized that retailers of ready-made suits had to maintain large inventories, and time-consuming fittings and alteration costs were significant. He looked for a way to eliminate both and his solution was photography. Said Booth, “I find it a challenge and an inspiration to realize that hidden in the folds of the future there lies a better way of doing almost everything we do today."  (PhotoMetriC and You brochure) This philosophy guided his daily work and he conceived of the idea for a photographic fitting method, known as the PhotoMetriC System (US Patent 2,563,451) to use in the custom tailoring industry.

Booth realized he needed assistance and that collaboration was key to bringing his invention to market. The camera, which supported this system, needed to be virtually foolproof, enabling the average shop clerk to reliably collect the necessary data without being an expert tailor or photographer. Booth worked with Theodore Yonkler, an architect who brought his knowledge of engineering principles to develop a screen for taking measurements from projections (US Patent 2,547,425); and with Dr. Kenneth Mees, Director of Research, and Fred Waller, a camera expert, both at the Eastman Kodak Company. Waller invented the method for photographically correcting photographic images of objects (US Patent 2,664,780) and the apparatus for measuring objects by photography (US Patent 2,664,784). Booth invented other clothing-related inventions such as a visible inventory and sales recording device (US Patent 2,037,192/RE 20,366), a cloth rack for displaying and storing fabric (US Patent 2,547,368), and a method and apparatus for testing fabrics (US Patent 2,547,367). All patents were assigned to the Henry Booth Methods Corporation of Bronxville, New York. 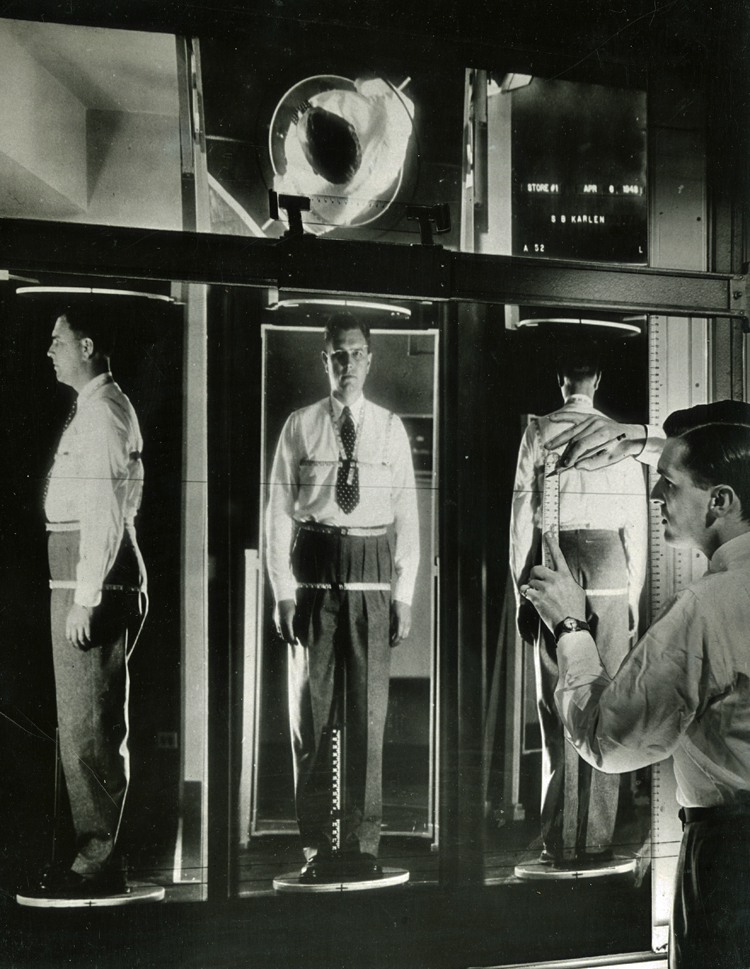 In contrast to to the limited choice offered in his nearest size by ready-to-wear stores, a customer at a PhotoMetriC-equipped retail shop selected his fabric,color, pattern, and style for a suit. His preferences were recorded on a form and sent to the workshop. The customer then stood on a platform with a specially-designed arrangement of nine mirrors. Eight mirrors reflected separate views of the customer and one mirror reflected the customer's name and other information. These angled mirrors allowed a photograph to be taken that showed the customer from the front, back, side, and top. The photographic film was then processed and a print was produced on a glass slide. 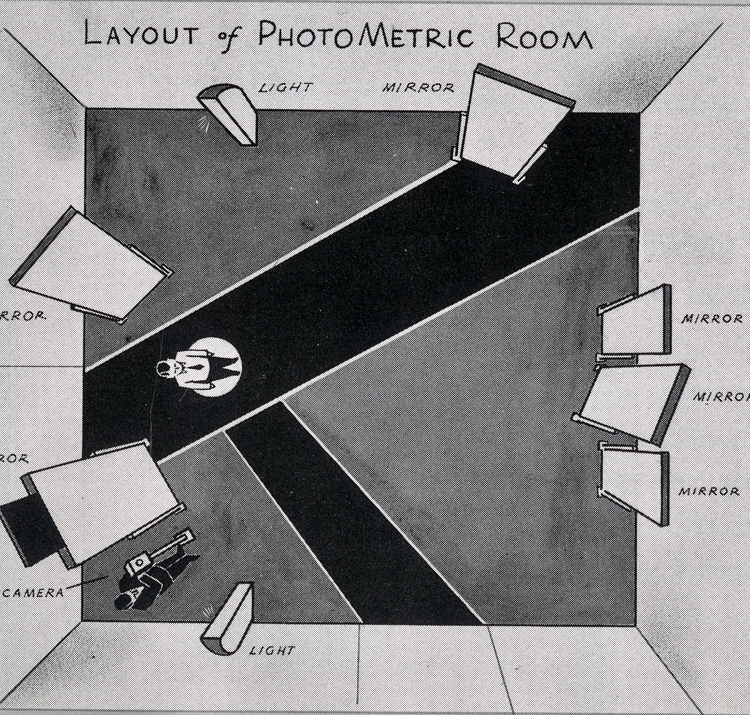 The slide of the photographic measurements was sent, along with the customer's suit order, to the tailoring shop. After the order arrived, the tailor projected the customer's image on a special screen made of a translucent material using the PhotoMetriC projector to create a pattern for the suit. The measurement data were then input into the PhotoMetriC calculator (US Patent 2,624,943), which Booth invented for “proportionally balancing garments.” The calculator contained over 500 choices of various suit sizes (for example 38 regular), then paired it with the closest match and calculated how to alter the suit at the tailoring shop to fit the customer. The tailor translated the measurements into specifications—a blueprint of “you in view”—for a customer-specific garment. When finished, the garment was mailed directly to the customer's home. A man’s suit cost approximately $135 in 1948.  In 1964, Booth expanded from menswear to include tailored clothing for women as well, offering suits, topcoats, and slacks. The brochure PhotoMetriC and You noted, “Every customer becomes a walking advertisement for your store.” 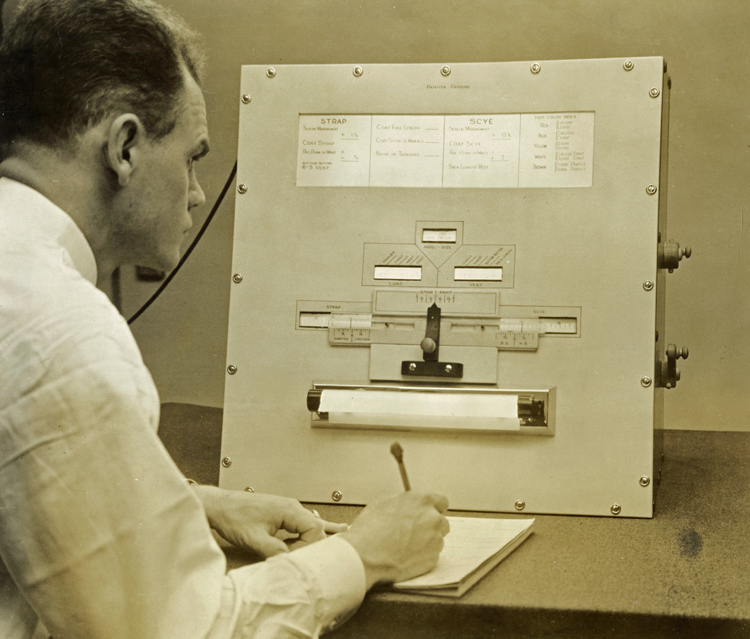 The PhotoMetriC system made its debut in two Richard Bennett stores in New York City on May 17, 1948. Licenses were granted to retail firms on a selective basis. Under the terms of the license, a firm was furnished with the PhotoMetriC equipment without charge, except for the costs of the initial installation and shipping charges from New York. The PhotoMetriC Corporation earned royalties only as the store made sales. Investing in a PhotoMetriC franchise required a minimum of $20,000 working capital. Some select retailers included: The Custom Gentleman (Englewood, New Jersey); Nathan's (Richmond, Virginia); The Golden Fleece (Point Pleasant Borough, New Jersey); and Joseph's (Terre Haute, Indiana). Demand for custom clothing waned, and the PhotoMetriC system eventually faded in the 1970s. 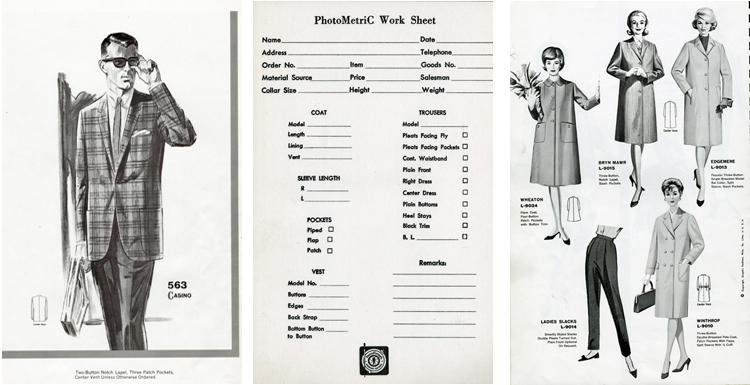 Henry Booth (1895-1969), son of a Methodist minister, was born in Canada and raised in England where his grandfather, General William Booth, founded the Salvation Army. In 1911, Booth came to the United States from England on the Lusitania. He worked in the textile industry for a few years; specifically as a manager for John B. Ellison jobbing offices in Portland and Seattle. In 1922, he formed his own firm with Harry Kemp and Robert Walker. By 1929, Booth moved east to New York City in order to pursue his career in the textile industry. He formed Amalgamated Textiles Limited with John and Blake Lawrence. In 1938, Booth met Curt Erwin Forstmann and entered into an agreement whereby Amalgamated Textiles Limited became fabric stylists and sole agents for the Forstmann Woolen Companies. In the 1940s, Booth purchased Hillandale, a Connecticut farm where he produced hand woven fabrics under the name Hillandale Weavers.  The fabrics were used extensively by PhotoMetriC retail outlets.