If it works so well, why redesign it?

Throughout my teen years I was a big car nut. I loved sports cars but one thing I loved more was concept cars. The concept cars had a uniqueness that factory models just did not possess. I would often follow the evolution of these cars as some of them worked their way into production. Quite often I was not as enamored by the production models. It wasn't until later in life that I began to realize how regulations, efficiency in assembly, and manufacturing molded the variations from concept to production model.

When we create a concept or prototype activity for Spark!Lab, it sometimes turns out rough and sometimes it has a unique and fun aesthetic form. As these activities transition to offerings for our Spark!Lab National Network sites, the concept models used in our space will often transform for very practical reasons. Currently the Laser Maze activity is going through the transformation process from concept to production.

Our laser maze challenges visitors to bounce a laser through a maze to a target. As part of our activity, visitors get to place the target and barriers anywhere they like within the maze.

They get to create the problem or challenge and devise a solution. My favorite part about the laser maze activity is that the laser carries an audio signal on it that can be heard when the target is hit. The audio output gives a real sense of accomplishment while also illustrating how data can be sent using light, like fiber optic Internet service.

The first prototype of this activity started out with a cocoa canister as the target. The canister contained an MP3 player and a microcontroller that would trigger a sound file when the laser hit a photoresistor, like the ones used to turn on night lights when it gets dark.

This worked ok, but I wanted to send the sound over the laser.

Our second iteration used an audio transformer to modulate the laser using the sound output from the MP3 player. The target in Version Two now had an audio amplifier connected to the photoresistor. The idea is that, as the modulated laser changed the resistance of the photoresistor, the amp would send that change to a speaker that makes the sound from the audio file. This worked ok, too, but I still was not happy. The photoresistor was soon replaced by a solar panel. This change gave a larger target for the laser and created a much cleaner transmission of the audio file.

A few more minor tweaks were made to our activity (labeling the target, adding metal mesh to protect the speaker, creating a more secure battery holder on the target, and other things that made the activity work better). The laser maze ran in its working concept form until we changed out our activities.

Now we plan to send the laser maze to our Spark!Lab National network sites. This has led us to begin redesigning this working activity. Given that each Spark!Lab site is different, we set out to make the activity safer, more solid, and easier to maintain. Our first big change was the batteries. We used lithium polymer batteries on our activity. They are extremely energy dense but have also been known to burst into flames while recharging. That would not do for our network sites. The target will now be powered by 6 rechargeable nickel metal hydride AA batteries. They are safe to use and standard AAs could be used in a pinch.

Our next set of changes was in the wiring and electronics. Our laser maze had a touchy $1.50 MP3 player that I hacked to work on the same power as the laser. This MP3 player worked fine for a while but developed this habit of corrupting the audio files on its SD card. The laser was also low cost and subject to voltage and shock sensitivity. We were using speakers that were recycled from old cell phones. During the first few months, our visitors found everything in our space that could fit through the speaker grill and damage the speaker. After experimenting with 4-5 different grill materials we managed to protect our speaker. We also had a headphone jack on our system that allowed visitors to send audio from their devices across the laser. 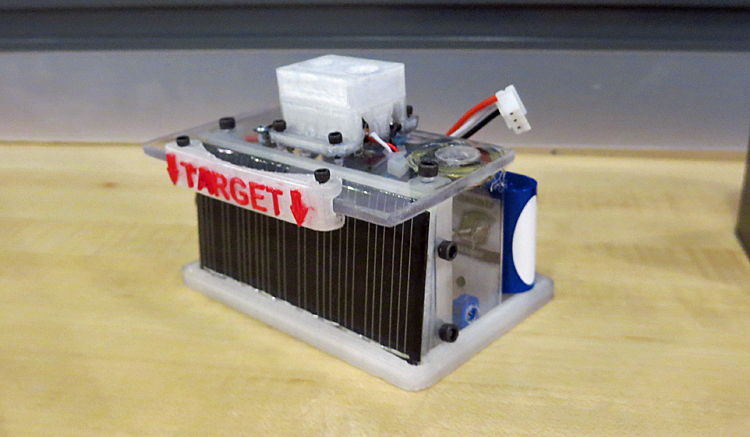 The second version of the target replaced the photoresistor with a solar panel. Photo by Tim Pula

Over time the cable and connector on this input suffered a lot of wear. With all of these lessons learned, we have found solutions and substitutes for those items that will be used in our production model.

Our final set of changes was the look of the laser maze components. Our components were a mixture of boxy and fluid in shape. The production model, much like a production car from when I was growing up, will take on more of the boxy characteristics of the original concept. Part of this is for ease of manufacturing and part of it is for ease of service. 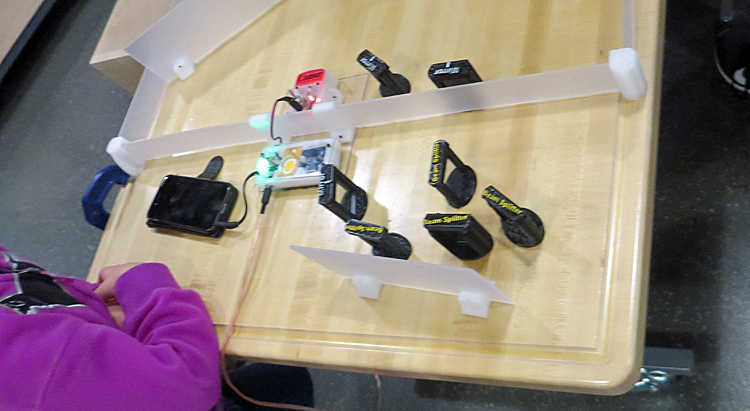 Visitor’s music transmitted on the laser. Photo by Tim Pula

The process of turning our working concept laser maze to museum-ready production model has been more challenging than I thought. There have been more design changes than I expected. In the end, however, our Spark!Lab National Network sites will not have to learn from our early design flaws. What they receive will be based on a "trial-by-fire" concept that informed us as we strive to make a more robust, safer, and more intuitive production model. 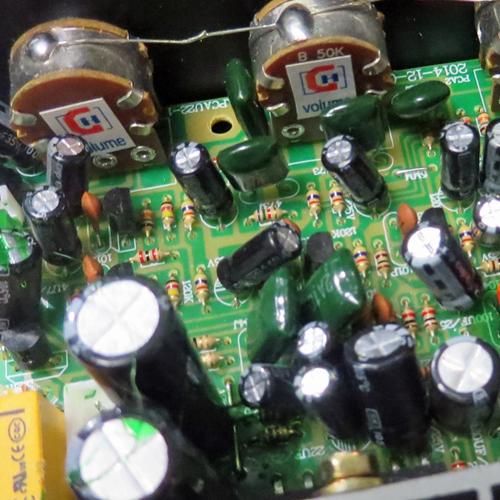 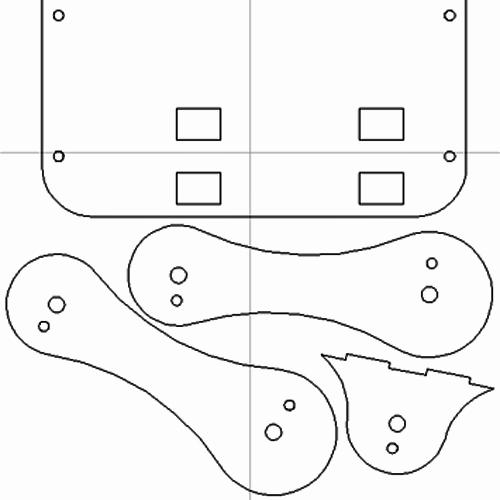 Designing with a New Tool

Spark!Lab's "Thinking Spot" inspired me to put our new CNC router to a creative yet practical test. 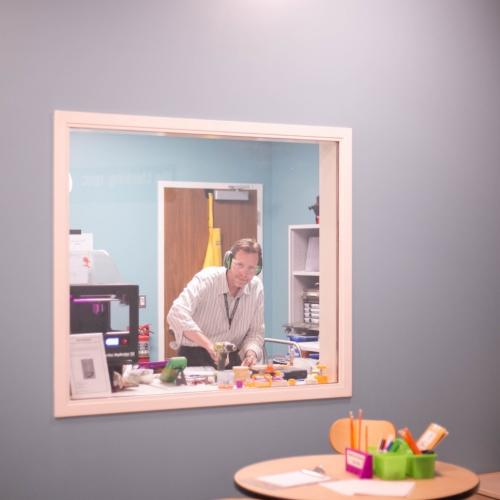