Creating something from scratch involves so much more work than tweaking something that already exists. When we change out our Spark!Lab activities (3 times a year), each new set includes 6–8 activities. After three years of changes, we have had some highly successful activities and some big failures. There are also activities that fall in between—and those are great candidates for tweaking. The in-between activities possess something special: lessons learned and potential.  p

I have recently begun working on activities for our upcoming “Adapt” activity set, due to go live in December 2018. For this set, I plan to revive two previous activities—the adaptive vehicle activity and one we refer to as the prosthetic hand activity. The adaptive vehicle underwent some major tweaks before its last time on the floor. Now it is time to improve on the prosthetic hand. 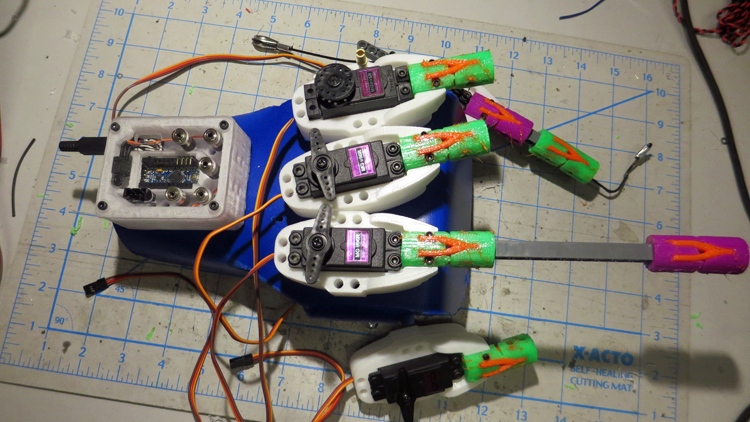 During its first iteration, the prosthetic hand had some success but was a little too buggy and complex for visitors to use. During its run, we tweaked building materials and mechanical and electrical components, and added a testing zone. In recent weeks I have been reflecting on the outcomes of these changes. I have also been interviewing staff and volunteers, who were here during the first iteration, about their experiences. Through this process, I have developed a plan to make this activity more accessible to visitors across the board.

Among the biggest challenges we had were that the electrical connectors lacked durability and ease of use. The custom finger joints worked pretty well but had weak points. These weak points were due to peg holes designed into the parts so that they could interface with the LEGO Mindstorms expansion set. Each joint was connected via LEGO parts. After interviewing our staff and volunteers, I learned that visitors rarely used these holes. I also learned that visitors did not intuitively realize that these holes fit with LEGO parts. 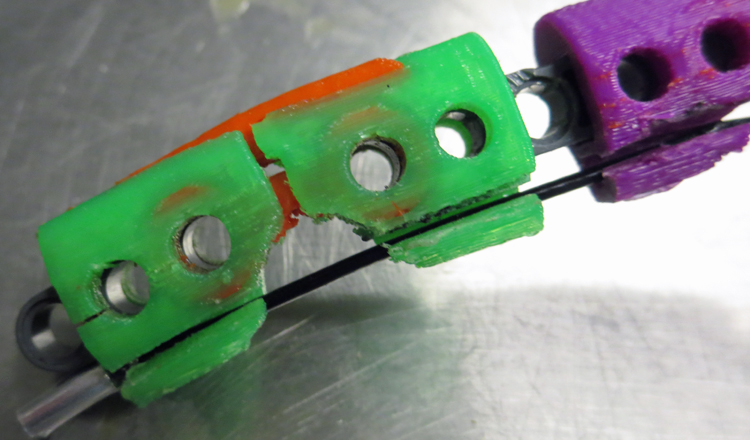 Given that the weak points could be removed, I decided to redesign the joints and appendages to make them smaller and more human-size. The parts in Version 1 created a finger that was nearly 7 inches in length. The new design would keep fingers under 4 ½ inches. This should create a more elegant, useful, and human-like outcome. 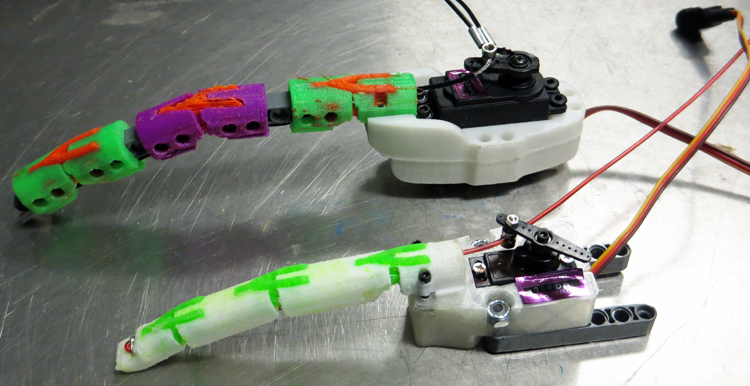 Another challenge with the Version 1 parts was that including a way to build on them, though rarely used, added more complexity to an already complex activity. The new fingers will not have the LEGO attachments on the joints and along their length, removing that complexity and making the activity at least a step more accessible.

Given the new design, without the holes, I am also able to experiment with the materials of production. Version 1 was created with 3D-printed, dual finger joints. The there was a hard component printed with PLA or ABS, and a soft component printed with flexible TPE (thermoplastic elastomer). This technique produced a single finger joint unit that was stiff in some areas and flexible in others. Our finger joints had no rotating hinges. The TPE worked like the cartilage between the joints in some areas and as flexible finger extenders in other areas. Using this design as a base, we are now poised to print the whole finger with two different flexible materials. I also now have the option to print solid parts on the inside to mimic bone, and flexible parts on the outside or where they are most needed. With what I have learned since we last had the prosthetic hand out on the Spark!Lab floor, I could even 3D print or carve molds that could be used to cast a better solution. These are only a few of the options available.

Besides the mechanical redesign we also hope to solve some electrical issues. One of the most frustrating parts of this activity were the delicate electrical connectors. While creating Version 1 of the activity, I had set my mind on not having a large “control box” to handle the input and output functions. The control box had 5 output ports, 2 input ports, a microcontroller, programming port, and power connector. All of this, thanks to the tiny size of an Arduino Mini Pro, fit into a box that was 3”X 2” X 1 ¼”. Though I am not likely to make the controller any smaller, Version 2 of the prosthetic hand is primed for a possible electrical connector change what could eliminate those pesky delicate connectors. 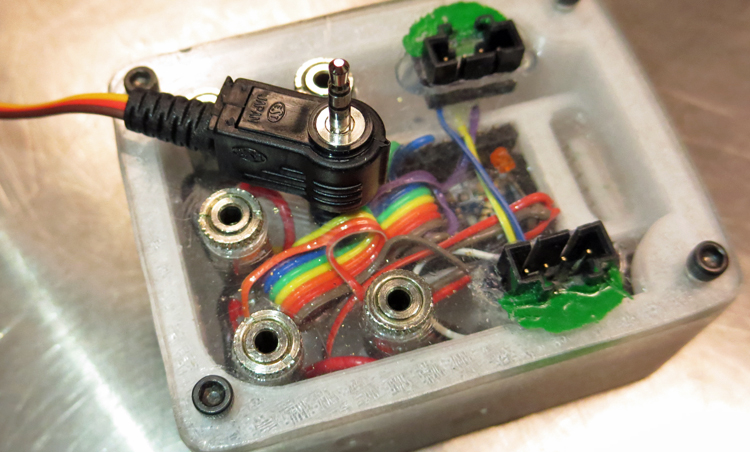 For years I have been on the hunt for small/micro-sized magnetic electrical connectors. Apple had this type of connector years ago on their laptops but nothing like it was available for general electronics use. For a season I tried to create them myself. Within the past year a product has hit the market that may solve that problem altogether. This product is a magnetic cell phone charger and data transfer cable. It consists of a small “dongle” and a USB cable. The dongle plugs into the port on your cell phone. Both the cable and dongle appear to have magnets on them. When connected, these magnets pull tiny electrical contact points in the end of the cable and the dongle together. The design seems robust, and since they are for cell phones, they come in a variety of colors. I have been taking apart a few of these connectors and cables with hopes to use them on the Version 2 of the prosthetic hand.

We learned a lot from the first prosthetic hand activity. It was an ambitious undertaking and proved to have quite a few less-than-ideal outcomes. Looking back on our first iteration is informing us on what we need to change for version 2. It is my hope that in its newest iteration the prosthetic hand will poove to be more intuitive, more durable, and more inspiring to the visitors that engage with it. 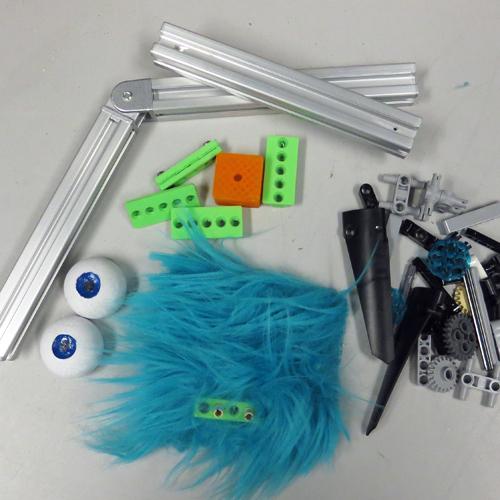 Prototyping an easy method for creating Muppet-like characters in Spark!Lab 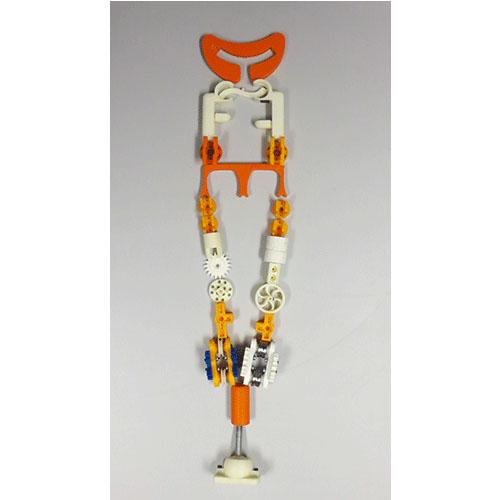 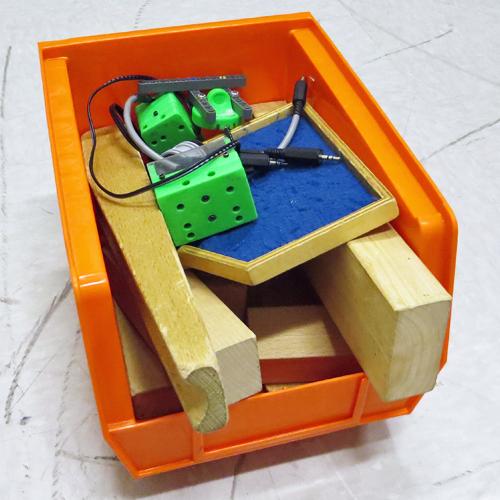 How do lulls in a project cycle contribute to future outcomes?