In 1966, Baer transformed people’s relationship to home television by inventing a way for them to interact with their sets, playing games like Ping-Pong, tennis, checkers, and more. His work led directly to the game Odyssey in 1972, the first home video game for the consumer market, and launched a million-dollar industry, though no one predicted that at the time. That same year, a young Nolan Bushnell played Odyssey at a trade show. Bushnell went on to found Atari and create the arcade version of Baer’s ping-pong game—Pong.

Baer’s groundbreaking work shaped the leisure-time activities of a large segment of the world’s population and spawned numerous businesses, but the historical record of his achievements very nearly disappeared. In 2008, Baer told us the following story of how his original documents and apparatus were lost … and then found. Thanks to Ralph and his family, his legacy is now preserved in the Smithsonian’s National Museum of American History, where Baer’s home workshop will go on display in summer 2015.

In the late 1990s I became aware that there is a growing community of classic video-game enthusiasts in the US and elsewhere and that collecting hardware (game consoles, accessories, etc.) is an ongoing, growing hobby. So I became very concerned about the fate of all of the TV game hardware, as well as its supporting documentation, that we had built at Sanders Associates in Nashua, NH, from 1966 through 1969. Hence, I began to inquire into the whereabouts and recoverability of the developmental games and the many supporting documents that Bill Harrison, Bill Rusch, and I generated during that period.

Photocopies of some of that documentation, used in various lawsuits against infringers of our patents, had been in my possession, but that was about all. Fortunately, people at Sanders were very cooperative and agreed that this material should be preserved. So I took charge of the collection effort and went after the hardware because I knew where it was stored and because it was most vulnerable to loss or destruction. Tracking down original documentation took place several years later.

There were a series of video-game-related patent infringement lawsuits, starting in the mid-1970s and finally ending in the mid-1990s, and I was not only deposed frequently but often appeared as an expert witness in court. Therefore I had a chance to review our game-development documents over and over again during that period of 20 years. That fact would later be of great help to me in my new task of trying to locate and preserve both hardware and documentation.

Depositions for the last of the lawsuits took place in Chicago in 1997 and I found myself once again in the offices of Leydig, Voit & Mayer, an intellectual-property law firm. During that deposition, video was shot in the Leydig, Voit & Mayer offices (these VHS tapes were recovered in 2004 by my friend and associate, David Winter) and show me handling every one of the eight different models of TV games, as well as other apparatus, that we had built at Sanders in the 1960s. In July 1997 I got the recovery effort rolling and received about half of the games from Leydig, Voit & Mayer a year later; the other games could not be located.

Because of health issues, I needed someone to help me continue the effort of data collection. I felt that that individual had to be a dedicated video-game historian and who had an existing, detailed knowledge of much of the early 1970s hardware, starting with the Magnavox Odyssey 1TL200. Preferably, he or she would also be someone who understood the technology and who was intensely interested in the details of the genesis of video games.

The only person I knew who qualified under these preconditions was David Winter in Paris, France. I began corresponding frequently by email with David starting in 1998. He was then in his mid-20s, had a background in electrical engineering and software, and had already amassed a substantial collection of classic video-game consoles. What is more, he turned out to be that rare individual who is a true collector, intensely interested in the history of video games. He was then already exceptionally knowledgeable about the technical and marketing details of video-game hardware from the early 1970s.

And in many ways, he reminded me of myself. I came back to the US from Paris as a GI in 1946, World War II being over, and brought 18 tons of foreign small arms home with me. I had been teaching the use of some of these weapons to GIs and in the process was thoroughly drawn into understanding those weapons’ heritage and technology. I became the self-motivated collector of, and resident expert on, foreign small arms for the War Department. This intense experience made me intimately familiar with what it takes to be a collector—and I recognized those traits in David Winter.

With my health deteriorating, I decided to invite David to accompany me on a trip to Chicago in June 2002 to try and locate the missing TV game hardware items. Unfortunately, in two long, hot, and dusty days at the storage facility, we located only one hardware item, but did find hundreds of photocopies of documents that shed new light on the early history of video games. For example, we found records of the pre-Odyssey product consumer acceptance tests carried out by Magnavox, as well as many internal documents that fleshed out the details of how the home-console video-game business really got started at Magnavox. With the availability of all that data, we had moved a big step forward in our mission to create a detailed historical track of who did what, when, and where to make the home-console video-game industry a reality.

The next year, David went to Chicago again, this time on his own, to take one more crack at the storage boxes in an effort to find Harrison’s, Rusch’s, and my original documents. He was eminently successful, locating the standard-issue Sanders notebooks kept by Bill Rusch and Bill Harrison during 1967 and 1968 as well as the original loose-leaf papers containing my 1966-72 notes, including the cover sheet and four-page document that I wrote on September 1, 1966. In that document I had laid out the concept of playing games using an ordinary TV set and proposed a lot of game ideas, thus making that document the closest thing to the Magna Carta of the home video-game industry. David also found the original guest book used by Magnavox in May 1972 to sign in visitors at its San Francisco showroom. There Nolan Bushnell, later president of Atari, signed that book and played the Odyssey Ping-Pong game hands-on. That act became the genesis of the arcade game Pong.

In October 2002 I had contacted David Allison, chair and curator of the Division of Information Technology and Communications at the Smithsonian’s National Museum of American History, and we agreed, in principle, that the Smithsonian would become the repository for the game apparatus, as well as some of the supporting photocopied documentation. Finding and donating the original documents was not even a remote possibility at the time. But in January 2006 I sent the newly located original documents to the Smithsonian. These have been digitized by the Lemelson Center and are available as part of the finding aid to the materials that I have donated.

The search goes on for additional documents relevant to the 1966-75 period that brackets the conceptual, developmental, and early production and marketing years of the nascent console video-game industry. As they surface, I expect to add them to the material already in the custody of the Smithsonian. Through the work of the Lemelson Center’s Modern Inventors Documentation (MIND) program, the fragile historical record representing my nearly lost legacy and that of other inventors as well is preserved and accessible.

When I first encountered video games, I didn't really see what all the fuss was about. Then I met Ralph Baer.

I lived in Australia in the early 1980s, and became an honorary member of a wonderful family whose friendship I still cherish. They had a contraption that I had never seen before hooked to their television set—it turned the TV into a video game. Their youngest son, who was about six, would goad me into playing the ping-pong game with him, because, honestly, I was hopelessly bad at it. I can still hear his squeals of laughter at my incompetence.

About a decade later, my nephew got his first game console and asked me to play. Even though I was a lot more computer-savvy by that point, I was still a pathetic opponent. I could never get the hang of the controls or understand the goals of these games. I really didn’t see what all the fuss was about. 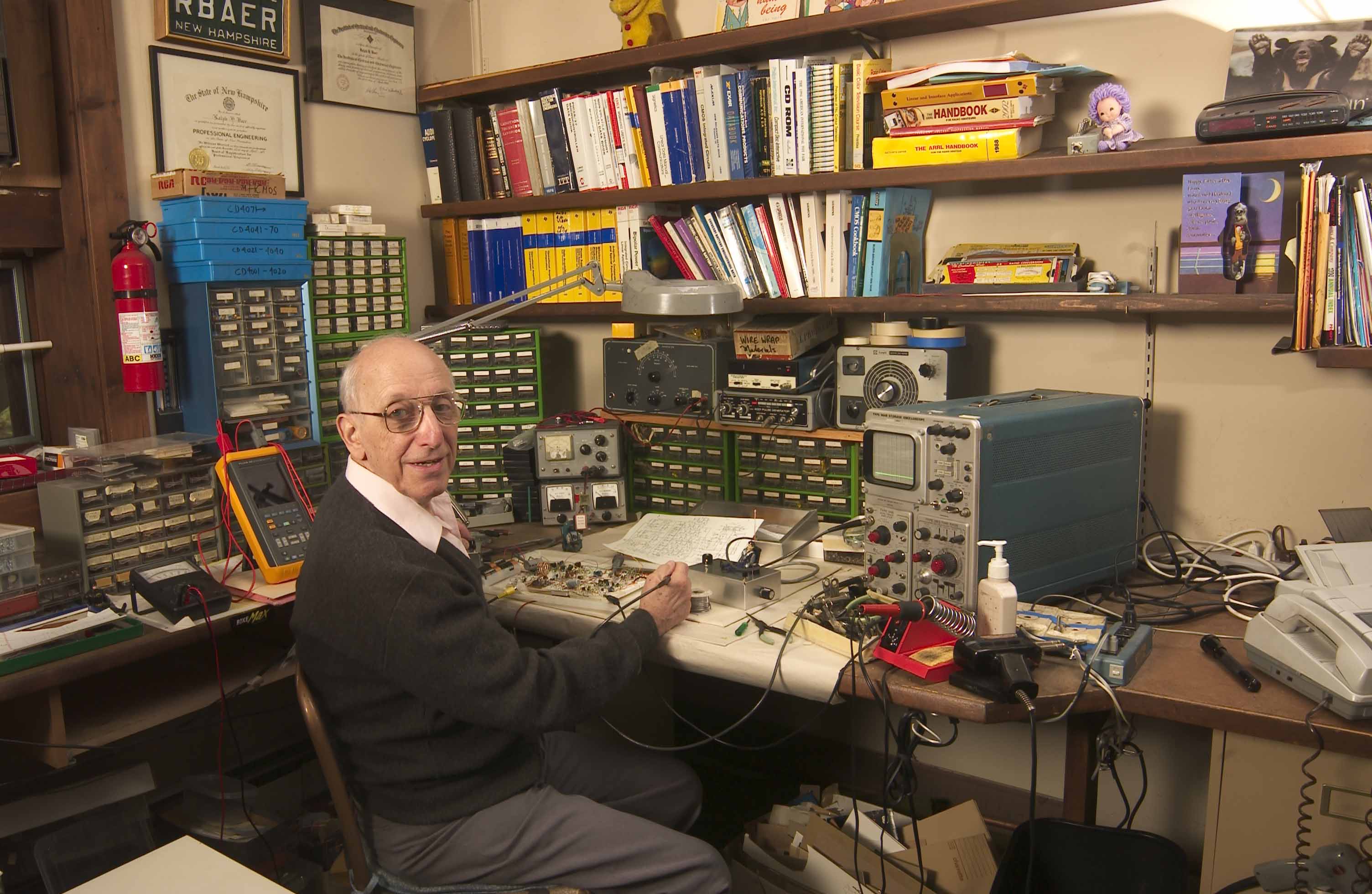 Then in 2003, I met Ralph Baer, the “father of the home video game,” as he is often known. I was at his home on a collecting trip with colleagues from the National Museum of American History. Ralph was a warm, funny, charming, and marvelously creative individual who told us the now-familiar story of why he invented a way to play games on a television set. All you could do with a TV, he said, was turn it on and off or change the channel. Ralph thought that was a frustrating waste of good technology.

During the course of talking about papers and artifacts that Ralph would donate to the national collections, he showed us the “Brown Box,” the prototype for the first multiplayer, multiprogram video game system. Of course, he challenged me to a game of ping-pong. But losing to the inventor of the game somehow didn’t sting as much as losing to a six-year-old Australian. 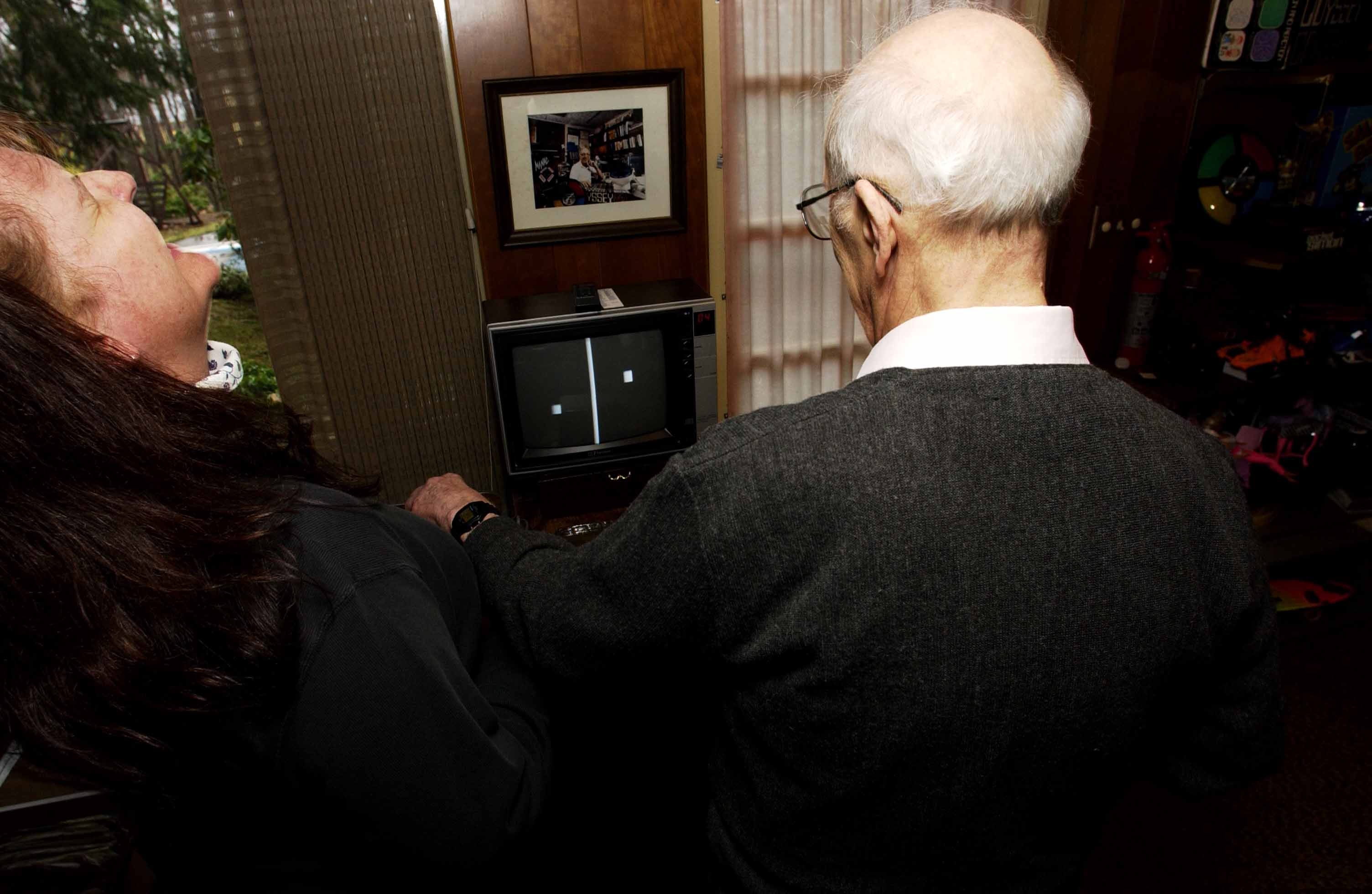 Losing to the inventor of the home video game. © 2003 Smithsonian Institution; photo by Jeff Tinsley.

On the day I learned of Ralph’s passing, I came across an article about two German graduate school inventors who are working on a way to make pedestrian crossings safer—by giving people who are waiting for the “walk” signal the chance to play videogames against their counterparts on the other side of the street. (Watch a video here.) I think Ralph would have been tickled by this testament to his legacy...but I dread the day when I will have to win a video game before I can cross the street.