I venture to guess that when most people hear “rocket scientist” either they envision a man wearing a lab coat. Meet rocket scientist and inventor Yvonne Brill.

I venture to guess that when most people hear “rocket scientist” either they envision a man wearing a lab coat or think of the phrase “It’s not rocket science” used in reference to comparatively easy tasks. In my years at the Lemelson Center I’ve had the advantage of meeting several fascinating rocket scientists, most of whom were women. Now, naturally, if you read my March blog “Girls Get Science and Invention,” you’re already aware of my particular interest in women inventors. In that light, I noticed a New York Times obituary about pioneering rocket scientist and inventor Yvonne Claeys Brill (born December, 30 1924—died March 27, 2013) and was intrigued to learn more about this recipient of the 2010 National Medal of Technology and Innovation “for innovation in rocket propulsion systems for geosynchronous and low earth orbit communication satellites, which greatly improved the effectiveness of space propulsion systems.” 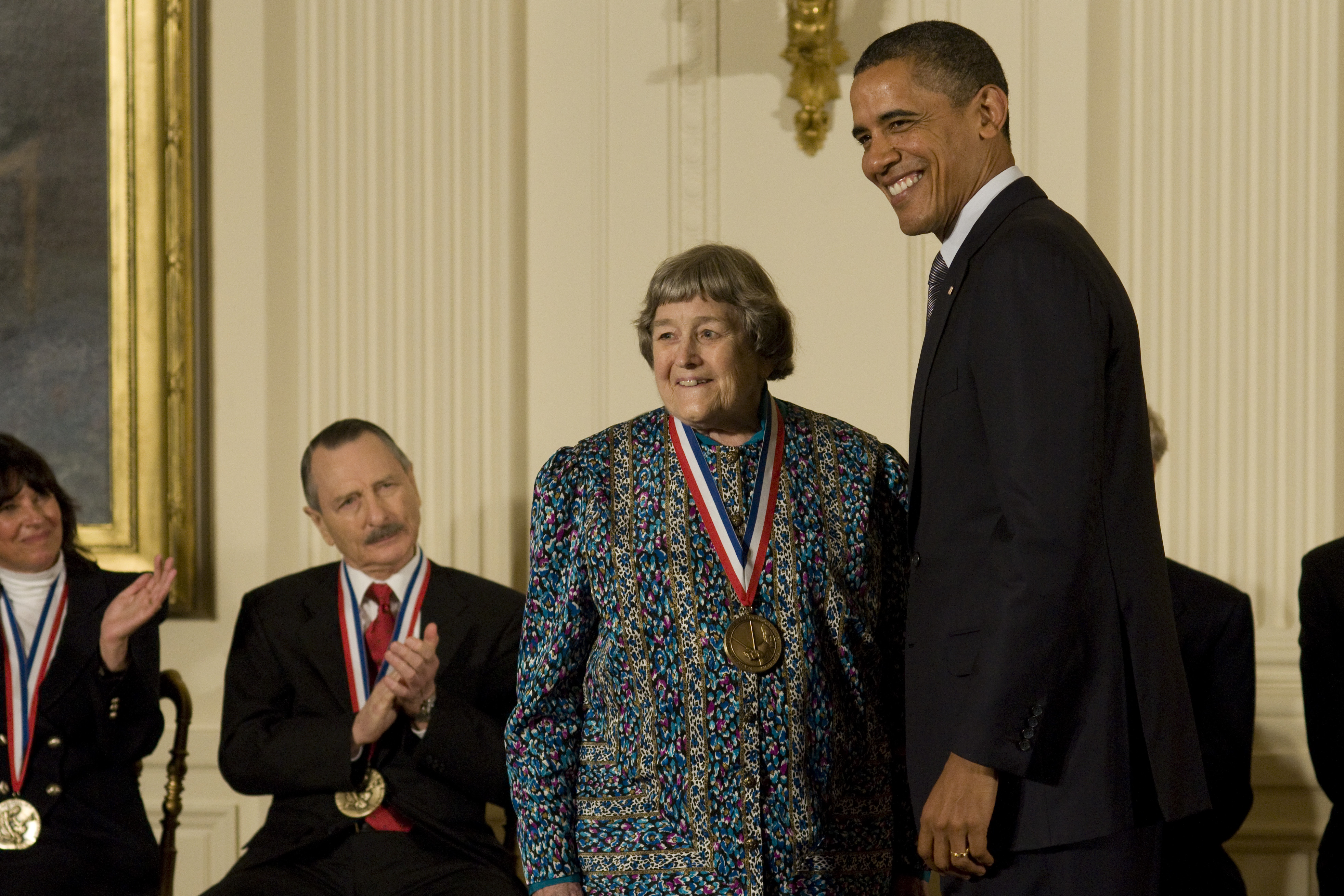 Yvonne Brill receiving the National Medal of Technology and Innovation in 2010 from President Obama. Photo via USPTO.

Unfortunately, her New York Times obituary received news coverage not so much because of Mrs. Brill’s amazing career accomplishments but rather because of the way the obituary was written…and then revised…due to initial complaints about its apparent sexism. The New Yorker, Slate, and other publications analyzed the “misguided obituary” that originally began: “She made a mean beef stroganoff, followed her husband from job to job and took eight years off from work to raise three children.” Two sentences later the obituary author added that she “was also a brilliant rocket scientist.” In the revised version, that latter statement replaced the beef stroganoff reference (which disappeared). However, as The New Yorker noted, you still had to read many paragraphs before finding out that, while raising three children, she was actually working part-time in the field before returning full-time and gaining fame for her satellite-related research.

Born in Winnipeg, Manitoba, Canada, Yvonne Claeys earned her B.Sc. in Mathematics from the University of Manitoba and her M.S. in Chemistry from the University of Southern California. She got a job at Douglas Aircraft and then shifted to the new field of rockets on the Project RAND contract. According to a 2009 MIT article, “she participated in pioneer studies that defined rocket propellant performance.” At RAND she also met her husband, William Franklin Brill, who was a research chemist. After marrying, they moved to the East Coast for his job, and her career path took her to, among others, a full-time job at Wright Aeronautical and part-time work at FMC Corporation during the aforementioned child-rearing years. Then, in 1966, she took a full-time job at RCA’s rocket subsidiary Astro Electronics where she patented her propulsion system for satellites, for which she gained international acclaim. Yvonne Brill’s projects included working on the propulsion systems for Tiros, the first weather satellite, and for Nova, a series of rockets designed for US missions to the moon. From 1981–1983 she worked at NASA, then returned to RCA for three years. From 1986–1991 she was the propulsion manager for the International Maritime Satellite Organization in London until her retirement.

Thanks to career-focused obituaries about Yvonne Brill I found many interesting resources, including a 2005 interview conducted with her for the Society of Women Engineers (SWE). Mrs. Brill had received the SWE award in 1986 and was elected the next year into the National Academy of Engineering for her work advancing spacecraft propulsion technology and propellant performance. Other career accolades included: the NASA Distinguished Public Service Medal in 2001, given to non-Government employees whose contributions demonstrate ”a level of excellence that has made a profound or indelible impact to NASA mission success”; the 2002 Wylde Propulsion award from the American Institute of Aeronautics and Astronautics; the 2009 John Fritz Medal from the American Association of Engineering Societies; and induction in the National Inventors Hall of Fame in 2010 for inventing the Dual Thrust Level Monopropellant Spacecraft Propulsion System (US Patent #3,807,657).

Throughout her career, Brill touted the importance of encouraging girls and women to become scientists and engineers. In her 2005 SWE interview, she sort of swept aside concerns about herself dealing with a lot of resistance as a woman engineer, but she spoke of challenges facing women generally in the male-dominated field. She commented that “the number of women in the National Academy of Engineering since I was elected [in 1987] progressed from a great tenth of one percent to three percent over almost 20 years. So it’s a very inch-y slow movement.” I hope that girls will be inspired to follow in Yvonne Brill’s footsteps.