As we ready Spark!Lab for its next theme, Things that Make Sound, I interviewed Interpretive Exhibits Coordinator Tim Pula about the process of developing new activities.

In Draper Spark!Lab, we will change the theme of our activities every four months to keep things fresh and the invention process constantly humming along. November 2015 will be our first transition since we re-opened on July 1st and, in anticipation of such a milestone, I wanted to find out what was in store for our Spark!Lab visitors as we say goodbye to “Things That Roll” and begin “Things That Make Sound”. I asked our Interpretive Exhibits Coordinator (aka The-Tinkerer-in-Residence), Tim Pula, to tell us a little about his process for developing the new set of activities.

LM: What was the first spark of inspiration that came to mind for the new theme?

TP:  The first thing that came to mind was a record player that plays notes for colors. I had built a record player that played tones based on light and dark and a robot that played tones based on color. This project would combine both of the previous projects. Being that so much of the late 1800s and early 1900s revolves around recording and playing back sound on disks, this seemed like a good connection of multiple thoughts. 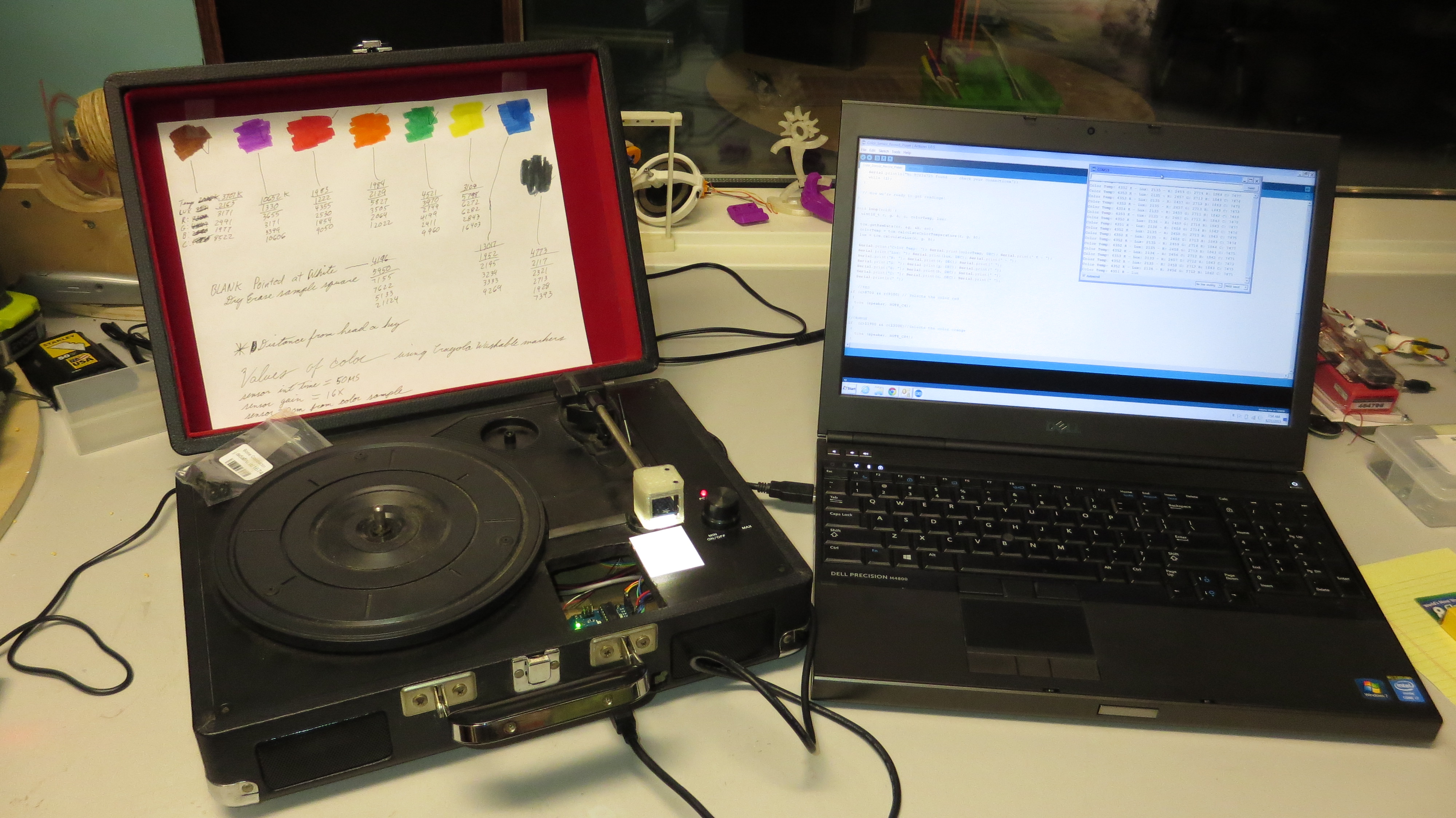 LM: I imagine there were lots of things that make sound that you didn’t know about. How did you explore the topic more broadly to get ideas for additional activities?

TP:  The first exploration came in looking at what collection objects we have on display in Spark!Lab. My next step was to think of some basic principles that generate sound (vibration, moving air, impact) and find ways that young inventors could engage with those concepts. I also sat down with Joyce Bedi, a senior historian in the Lemelson Center, and picked her brain on things that make sound that we may be able to tie back to museum collections. A basic list was created from the initial ideas, then I began looking into our collections based on my conversation with Joyce. After that I proposed the ideas to other members of the team for feedback.

LM:  Can you share a sketch of something you are working on, and how the sketch helped you work out some potential problems?

TP:  Attached is a sketch of a string length setter/tensioner that I created for “The invent a stringed instrument” activity. This part is meant to allow visitors to set guitar strings at any length and add tension to the strings, without over tightening. Some of the early ideas involved angled screws and holes. This may work but would be hard to reproduces multiple times. The next idea was make the string holder blocks lever into position in an instrument body. This approach would add a lot of restrictions to how a visitor could configure their stringed instrument. The approach in the sketches uses a plank as a lever to sit into place and tension. The prototype that I produced on the 3D printer worked pretty well but will certainly be tweaked farther. 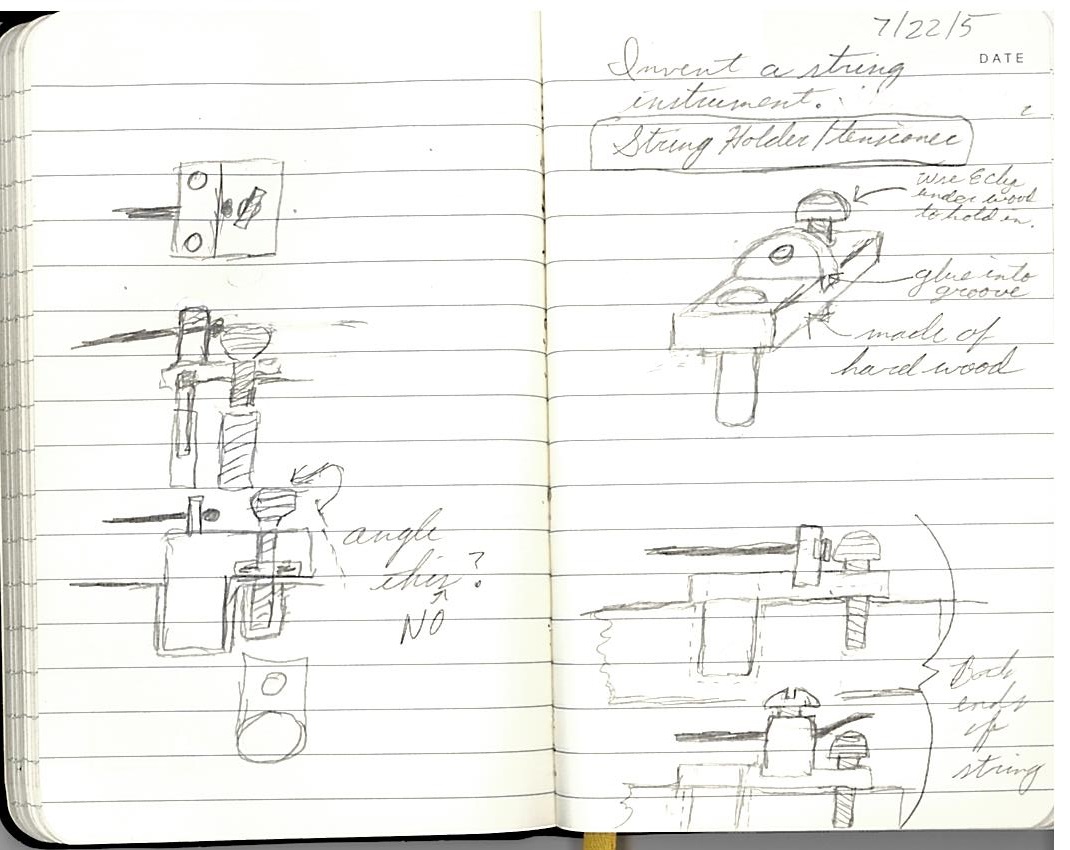 LM:  What has been the most fun prototype to build? 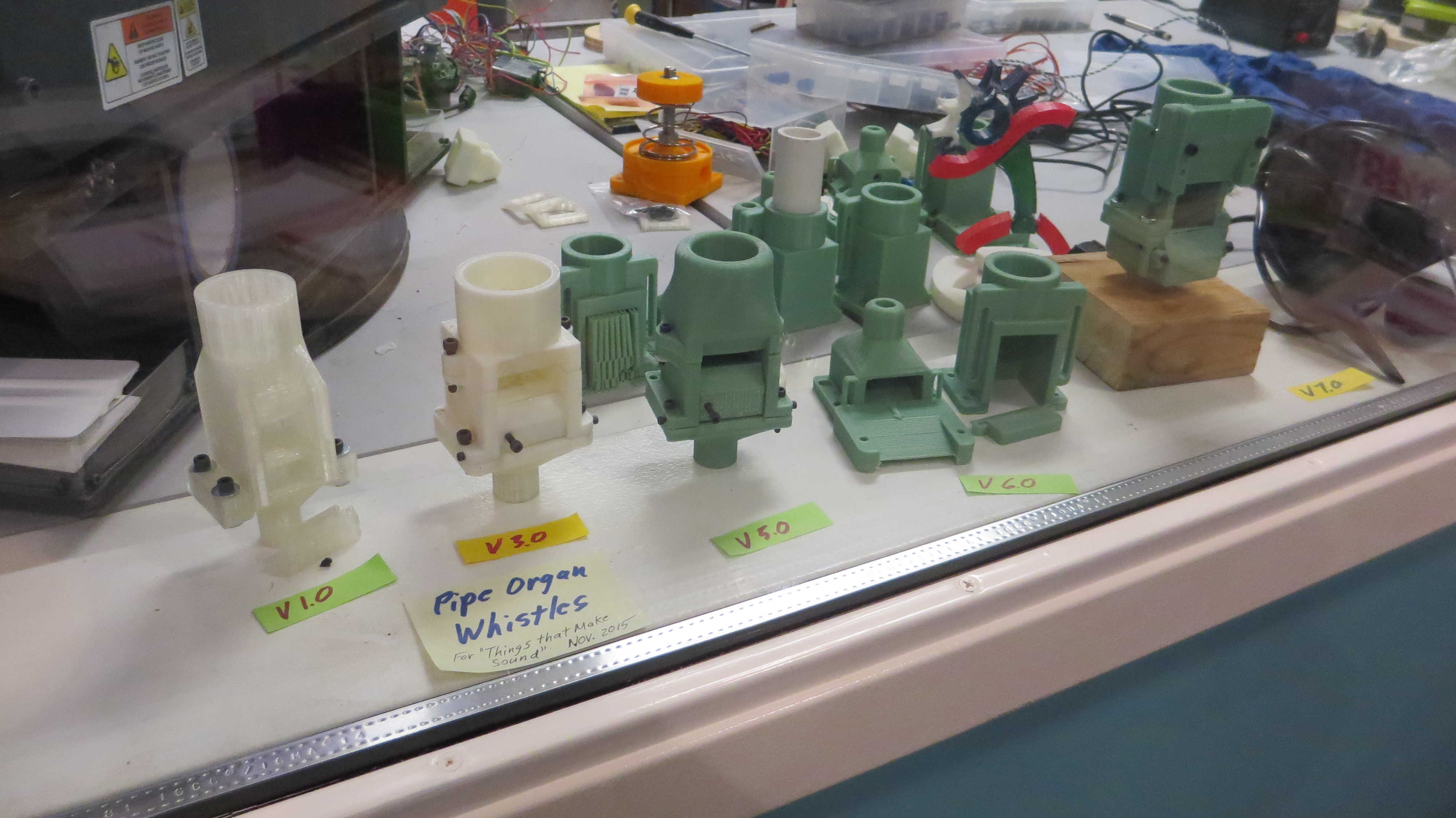 LM: What has been the most challenging and what tweaks have you had to make so far?

TP: There have been a lot of “most challenging” activities. Today it has been the musical art piece. The software that creates the code needed to operate the music player has been very inconsistent. On top of that, the music player is being triggered by capacitive touch sensors. The sensor has not been consistent today. I have made a number of program changes and wiring changes but nothing is making it work the way I want. The sensor will work fine when not connected to the wav trigger. I expect to have some inspiration on how to make it work during my Metro ride. That is usually when ideas come to me.

LM: Spark!Lab is always lively with the sounds of invention, but how did you build in volume control for Things That Make Sound?

TP: Volume control for Things That Make Sound activities depend on the activity. In general, if it is electrical the volume can be turned down using a potentiometer. The pipe organ will use a water spigot, like the one on the outside of a house, to reduce air flow. This will reduce the maximum volume. Some of the other activities will simply have a master volume control not accessible by visitors. Only the staff will have access. On the percussion related activities volume control is a little tougher. To reduce the volume of these activities I will be adding thick walled rubber to the tips of the sticks used to strike the percussion implements (bottles, pipes, drums).

LM: Thanks Tim! We can’t wait!

The day after I interviewed Tim, he had a breakthrough he wanted to share!

TP: An update to the “what has been most challenging?” question:

The musical art piece has had a breakthrough! I discovered a very unintuitive setting that needed to be changed so that the program would work correctly. As for the triggering using the capacitive touch sensor, I have learned that if I use a separate voltage handling circuit than that of the WAV trigger and ground it to the main 12volt power supply, the capacitive touch sensor works the way I need it to.

I know that is a lot. Breakthroughs like that are so encouraging. The inventive process can, at times be frustrating. There are limited or no instructions to create “your idea.” Quite often you are using bits of product instructions and creating the rest of the instructions on your own based on creating trying and tweaking.

LM: Congratulations, Tim! Way to stick with it until you figured out a great solution! 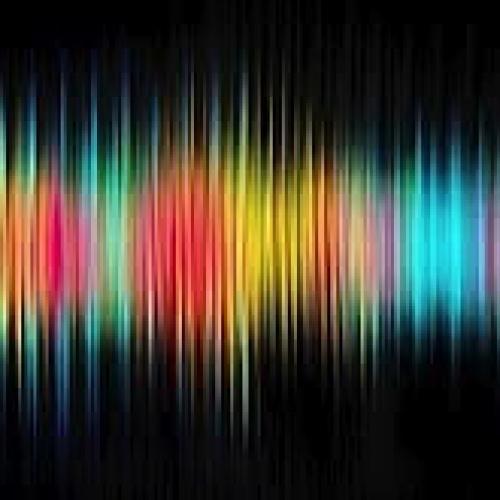 Can you hear color?