Intended to endure only for six months, the ruby slippers have exceeded their Hollywood origins and attained "star" status.

Hollywood is much more than a southern California locale for experiment and innovation—it's the actual and symbolic center of the American film industry, a place where the everyday is transformed into the extraordinary, a nexus of reality and dreams where mundane monochrome is spun into the rainbow-hued stuff of legends. As Paul Nathanson says in his 1991 book Over the Rainbow, Hollywood has become legendary for its ability "to reflect . . . the collective daydreams of America." (1) One example of the innovative way that the Hollywood movie industry of the 1930s reflected these "collective daydreams" is the creation of the iconic movie prop, the ruby slippers, for the 1939 film The Wizard of Oz.

Designed and manufactured as a routine movie costume by the wardrobe personnel at MGM Studios in 1938 and intended to endure only for the six months of the film's shooting schedule, the ruby slippers have exceeded their Hollywood origins and attained "star" status. Although the slippers are representative of Hollywood's glittering legacy, they were not, strictly speaking, created in Hollywood. Instead, they were made and used in nearby Culver City, some seven miles southwest of Hollywood and Vine, at Metro-Goldwyn-Mayer Studios. The saga of the ruby slippers' creation begins with studio head Louis B. Mayer, a man who was every bit as autocratic, as wily, and as self-made as the great Wizard of Oz himself. (2)

By the late 1930s, Mayer had succeeded in building a moviemaking empire, founded on his philosophy of a "star system" that helped ensure artistic quality and financial profit for the studio. In 1938 Mayer purchased, at the suggestion of newly hired MGM producer Mervyn LeRoy, the screen rights to The Wonderful Wizard of Oz from Samuel Goldwyn Studio for $75,000. An American fairy tale of sorts by L. Frank Baum (1856-1919), the book told of Dorothy, a farm girl, who is whisked away from her native Kansas by a cyclone to the strange and fantastic realm of Oz. Mayer was aware that the book had been used previously for a series of theatrical adaptations and films, but planned to present his screen version of Baum's story in the lavish, opulent style that filmgoers had come to expect of MGM Studios. One distinctive feature of the film was Mayer's idea: he wanted to express the fantasy sequences set in the Land of Oz in the relatively new process of three-strip Technicolor film.

The adaptation of Baum's book into a screenplay was entrusted to English novelist and playwright Noel Langley, who was joined by a pair of American screenwriters, Florence Ryerson and Edgar Allan Woolf. (3) It is Langley who is credited, in one of his numerous script revisions, with making a notable change to the original narrative. In Baum's book, Dorothy's magical footgear consists of a pair of silver shoes. But by the beginning of summer 1938, Langley had inserted a new stage direction in his draft movie script. In a nod to the vivid hues of Technicolor, Langley had added a sentence to his stage directions that reads simply, "the ruby shoes appear on Dorothy's feet, glittering and sparkling in the sun." (4) More or less concurrently with the script development, MGM's flamboyant couturier Gilbert Adrian commenced sketching his costume designs for the many fantastic characters, including those for heroine Dorothy and her enchanted slippers. Adrian regally presided over MGM's wardrobe department, and he set its employees in motion to create the ruby slippers from his sketches. As one wardrobe staffer recalled, they tested many approaches to the design of the slippers. (5) One was to obtain an alreadymanufactured pair of leather shoes and spray them with a shiny patent-leather-looking paint, but this proved visually flat and unsatisfactory on Technicolor film. Eventually, as the result of many experiments, Adrian drafted the design for the slippers in two forms. One pair was distinctly exotic-looking, resembling something from a Middle Eastern harem. The slippers were covered with red sequins and faux jewels and equipped with ornate curled toes. These became known as the "Arabian Test Shoes" and were used only in test photographs of the costumes.

A second stylistic approach was to dye a commercially manufactured basic silk pump red. This was covered with a red silk fabric that was sewn with rows of approximately 2,300 crimson-colored sequins. After the sequins had been stitched to the silk covering, the covering was then sewn onto the shoe. When filmed under the brutally intense lights required by the Technicolor camera, the crimson sequins that encrusted the slippers appeared a glistening ruby red on screen. (6) In October 1938, two weeks before shooting on the film started, Adrian made a final touch to his design by adding butterfly-shaped red leather bows decorated with red rhinestones, bugle beads, and costume jewels. In 1938, the cost of making a pair of ruby slippers was estimated at about $15.00. (7)

It is uncertain how many pairs of slippers were created for use in the film by star Judy Garland and by her stand-in Bobbie Koshay, as well as the shoes seen on the feet of the Wicked Witch of the East, protruding from under Dorothy's farmhouse when it lands in Oz. Estimates range from six to ten pairs. Today, there are known to be four pairs in existence which were used for the film, plus the pair of "Arabian Test" shoes, most of which are in the hands of private collectors. Little did the MGM staffers realize that, when they speedily rushed to meet production deadlines, they were creating objects that would live beyond the initial release of the film and become revered as an icon of 20th-century American culture.

The ruby slippers in the collections at the National Museum of American History were purchased in 1970 at the MGM auction of props and costumes. They had rested for years, relatively forgotten, on the storage shelves at the studio, and were among the most popular items of the auctioned relics of a bygone age of Hollywood filmmaking. The slippers were given to the Museum in 1979 by an anonymous donor. The Smithsonian's slippers are size 5C and are silk-covered leather pumps that have been dyed red and are lined in cream-colored kid leather. They have a modest heel of one-and-one-half inches. In the instep of the right shoe is a label embossed in metallic ink that reads "Innes Shoe Company, Los Angeles, Hollywood, Pasadena," confirming that the ruby slippers were fashioned from a commercially manufactured pair of shoes. According to author and historian Rhys Thomas, these were the first and primary shoes made for and worn by Judy Garland.

Today, the slippers conjure a wealth of ideas and emotions: they're bathed in the nostalgia of our collective memory, reminding us of the innocence of youth and the warmth generated by the film's central message "there's no place like home." The ruby slippers prompt our visitors to wonder at the magic created by the Hollywood studio system and to ponder the fact that one of the Museum's most iconic objects is a pair of shoes that were created as a movie prop in a hot spot of invention—Hollywood.

(1) Paul Nathanson, Over the Rainbow: The Wizard of Oz as a Secular Myth of America. Albany: State University of New York Press, 1991, p. 7.

(3) Additionally, it has been asserted that the film's lyricist, E. Y. Harburg, contributed material to the final screenplay. See Harold Myerson and Ernie Harburg, Who Put the Rainbow in The Wizard of Oz? Ann Arbor: University of Michigan Press, 1993. 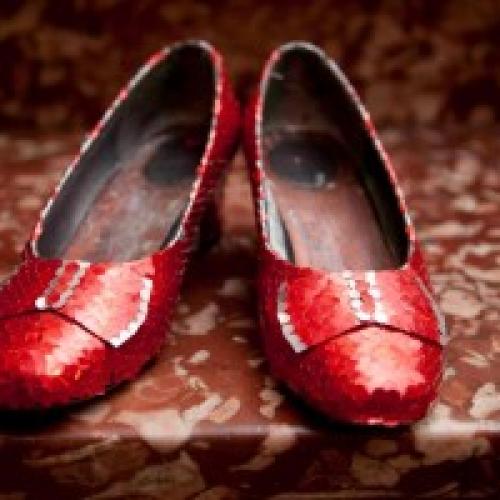 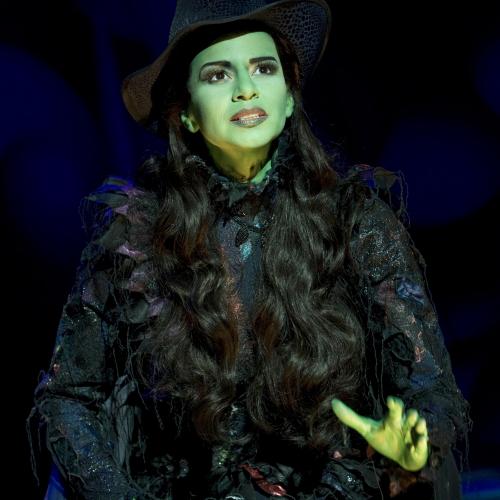