Automatic pin setting technology was the first of many advances that would transform the game of bowling.

According to the United States Bowling Congress (the national governing body for bowling as recognized by the United States Olympic Committee), 71 million people bowled at least once in 2010 and bowling is the number one participation sport in the United States. I began bowling at a young age, thanks to my parents who bowled in a weekly league at alleys in Northern Wisconsin and Upstate New York. In fact, my father and uncle were pin setters (aka “pin boys”) at the Lakeview Recreation (Chicago) and the Red Ray Lanes (Kewaunee, WI) respectively. And, no one “rolled” quite like my mother. She was so good that she even appeared, briefly although unsuccessfully, on Rochester television’s Bowling for Dollars. I recently rolled a few games and began thinking about how mechanization changed bowling. The AMF Automatic Pinspotter Records at the Archives Center details part of this history. The AMF Records allowed me to learn about part of the story—bowling’s “electric brain.”

The game of bowling has changed over the years, thanks in large part to technology. Automatic pin setting technology was the first of many advances that would transform the game of bowling. Other advances, including the automatic ball return, lighted pin indicator, automatic scoring, and the electric-eye foul line violation detection, made the game more efficient and caused bowling as an industry to thrive. 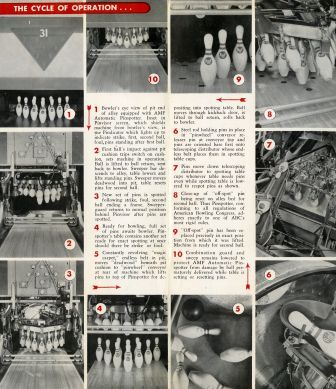 Bowling is simple right? Throw a ball weighing approximately six to 16 pounds down a lane and knock down 10 pins. If you’re lucky, you’ll avoid throwing a gutter ball and knock down a few pins. Then, the pins you knocked down will disappear, the remaining ones will be reset, and your ball will appear magically in the ball return and you can try again. This wasn’t the case with bowling prior to 1946. The technology of the automatic pin setting machine was slow to catch on. Pin setting apparatuses, such as John Kilburn’s 1908 invention (US Patent 882,008), were early attempts to mechanize the process. Before mechanization, humans did the pins setting, typically young men. Not only was this terribly inefficient, the work was tiring, gritty, and low-paid. Subsequent patents by Kilburn in 1911, 1917, and later years were not adopted, but in 1941, Gottfried “Fred” Schmidt of Pearl River, NY, patented a bowling pin setting apparatus (US Patent 2,208,605) and a suction lifter (US Patent 2,247,787). As Schmidt noted in his patent application, previous apparatuses did not work satisfactorily because they “could not accurately spot the pins or engage with the pins left standing.” Schmidt would know. A bowler himself, he received 12 patents for bowling pin setting apparatuses. All of Schmidt’s patents were assigned to the Bowling Patents Management Corporation, which was later purchased by American Machine & Foundry Company (AMF) thus giving AMF the patent rights to manufacture and use the technology. AMF was no stranger to diversification or tackling mechanization projects. In 1900, the company made tobacco manufacturing machinery; in the 1920s, bread wrapping machines; and in the 1930s, necktie making machines. Bowling fit right in with their plans. 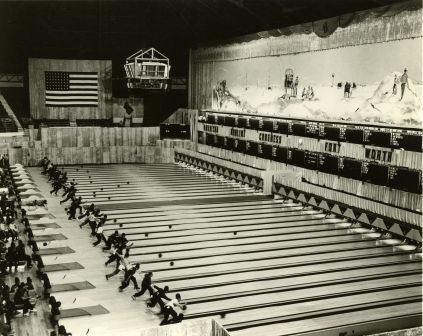 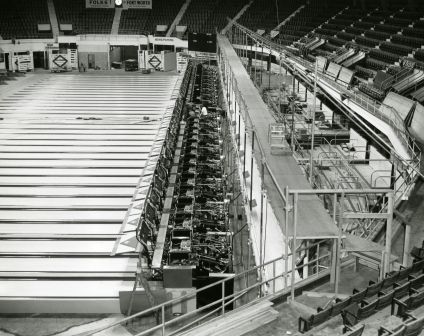 The pinspotter weighed 2,000 pounds and operated at a speed of seven to 10 games per hour—depending on the speed of the bowler. The machine had eight principle assemblies: the cushion (stops the ball); the ball lift (carries the ball high enough to allow a gravity return); the sweep (removes deadwood from the alley); the carpet (carries pins from the alley into the pin elevator); the pin elevator (wheel that carries the pins and delivers them to the distributor); the distributor (takes pins from the elevator wheel and delivers them to the table); the table (location where the pins are spotted for the next frame); and the electrical system (selects the cycle for the machine to perform). After a bowler released the ball and knocked pins down, the rack above the pins came down and using a suction cup, picked up any pins left standing.  A bar then dropped down and swept away the fallen pins (aka “deadwood”). The fallen pins then moved onto a pit conveyor belt and were fed into a moving cylinder that carried them to the top of the machine. The pins, still held in place by suction were reset onto the alley and the bowler’s ball was returned to them via a conveyor belt mechanism. Finally, pins were set back (spotted) into place and the process could begin again.

In 1946, AMF unveiled the new pin setter, known as the Automatic Pinspotter (Model 82-30), to the public during the American Bowling Congress (ABC) Tournament in Buffalo, NY. AMF was unable to demonstrate their machine at the tournament itself, so they set-up their new machine in a nearby building to promote its efficiency. Not until 1952 would the Pinspotter be ready for prime time and have finally gained acceptance. By 1958, AMF had leased 40,000 pinspotters, truly mechanizing bowling centers across the United States.

So, if you haven’t bowled lately, get out there and roll a few games!