Sol Adler's portfolio of inventions, books, and theories are broad and impressive.

Solomon "Sol" Adler is probably best known for his sewing machine inventions, but when you look into his portfolio of work you also see ideas and patents for a fountain pen, a window treatment, a receptacle tap, a telescoping umbrella, an ashtray, a retractable table, and jewelry designs. Adler wrote fiction as well (mostly short stories) that reflected his experiences during the early 1900s in New York City. He filled pages with themes on social protest, radicalism, mobs, unions, poverty, and sweatshop operators. In 1958 Adler wrote about theories of nuclear physics, noting, "Indeed a very bold attempt and definitely a long way from sewing machines." Adler’s flow of ideas was constant and he sought to express them constantly.

Sol Adler was bon on July 8, 1901, on the Lower East Side of Manhattan, one of Isaac and Mindel Adler’s five children. Isaac was a tailor, so sewing machines were part of Sol’s life from the beginning. As a young man, Adler apprenticed in machine shops, honing his skills until he became an expert machinist and toolmaker; these skills eventually allowed him to build the machines he visualized. Adler’s design drawings show his precision as a draftsman and engineer (he attended the City College of New York) and provide good insight into the drawing abilities that he later used in preparing patent drawings.

Adler’s work on sewing machines began in the late 1930s with tinkering with his sister-in-law Bess’s treadle-operated Singer machine. Bess wanted a lightweight, motorized sewing machine that had enough space between the frame and the needle for large projects such as quilts. Using his own basement machine shop, Adler began building simple frameworks for sewing machines to better understand the relationships between the parts and their functions. Adler’s first sewing machine (which he dubbed the "parent machine") earned U.S. Patent 2,561,643, issued in 1951. The machine was a full-size home machine, with a concealed motor and power cord, that could also expand into a commercial-size machine. Six subsequent patents for subassemblies were derived from the "parent machine" over the next several years.

Analyzing the evolving U.S. domestic sewing machine market gave Adler ideas for further inventions, refining the machines and adding new features. Unfortunately, success was elusive; his machine with zigzag- and straight-stitch capability was rejected by several U.S. and European sewing machine manufacturers. But in 1954, Adler met Max Hugel, president of the Asiatic Commerce Corporation of New York, later known as Brother International Corporation (BIC), a subsidiary of the Nippon Company. Nippon wanted to solve certain design and operational problems it was having in developing a zigzag sewing machine for sale in the United States. Adler joined BIC, moved to Japan, and succeeded in helping correct the design issues. Adler named the machine the "Select-O-Matic" because by turning a few knobs, an operator could select one of the six patterns that the machine could produce.

Adler stayed with BIC until 1959, working on a variety of sewing machines including an automatic zigzag machine and the versatile "Pacesetter," which was unveiled in the United States to great acclaim at the Sewing Machine Show in New York City on July 18, 1955 (a version of the Pacesetter is still sold by Brother). Additionally, he worked on a line of industrial and domestic sewing machines, home washing machines, home knitting machines, and other small appliances. Adler earned several Japanese patents for his work.

Among Adler’s writings is this pronouncement of his passion for invention: "When an idea is conceived by an inventor, it never leaves him in peace, it possesses him day and night until it is expressed, after which he enjoys a sense of relief and accomplishment." Happy National Inventors’ Month! 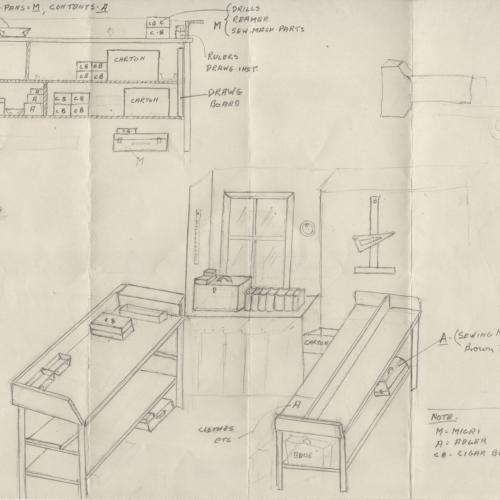 Examining the life and work of Solomon “Sol” Adler (1901-1989), an American-born inventor of sewing machines, provides a glimpse of one invention space.