The Straight Truth About the Flexible Drinking Straw

Joseph Friedman didn't invent the straw, he just made it better.

Legend has it that Marvin Stone invented the first paper drinking straw while sipping a mint julep after work. Stone, a manufacturer of paper cigarette holders, was drinking with friends, using the traditional natural rye grass straw. Dissatisfied with the way straws would break down and leave a gritty residue in the drink, Stone fashioned his first straw by winding strips of paper around a pencil, removing the pencil, and gluing the strips together. This improved device was test-marketed at a local drinking establishment and enthusiastically received. Stone then refined his design by using paraffin-coated manila paper to prevent the straws from becoming soggy and disintegrating. He patented the product in 1888, and by 1890 his factory was producing more straws than cigarette holders.

One day in the 1930s, while sitting in his brother’s fountain parlor, the Varsity Sweet Shop, in San Francisco, Joseph B. Friedman (1900-1982) watched his young daughter Judith at the counter struggling to drink a milkshake out of a straight paper straw. Friedman, an inventor with a natural curiosity and a creative instinct, took the straw and inserted a screw. He then wrapped dental floss around the paper into the screw threads, creating corrugations. After he removed the screw, the altered paper straw would bend conveniently over the edge of the glass, allowing a small child to better reach the beverage. U.S. patent number 2,094,268 was issued for this new invention, under the title Drinking Tube, on September 28, 1937. Friedman would later obtain two additional U.S. patents and three foreign ones in the 1950s related to its formation and construction. 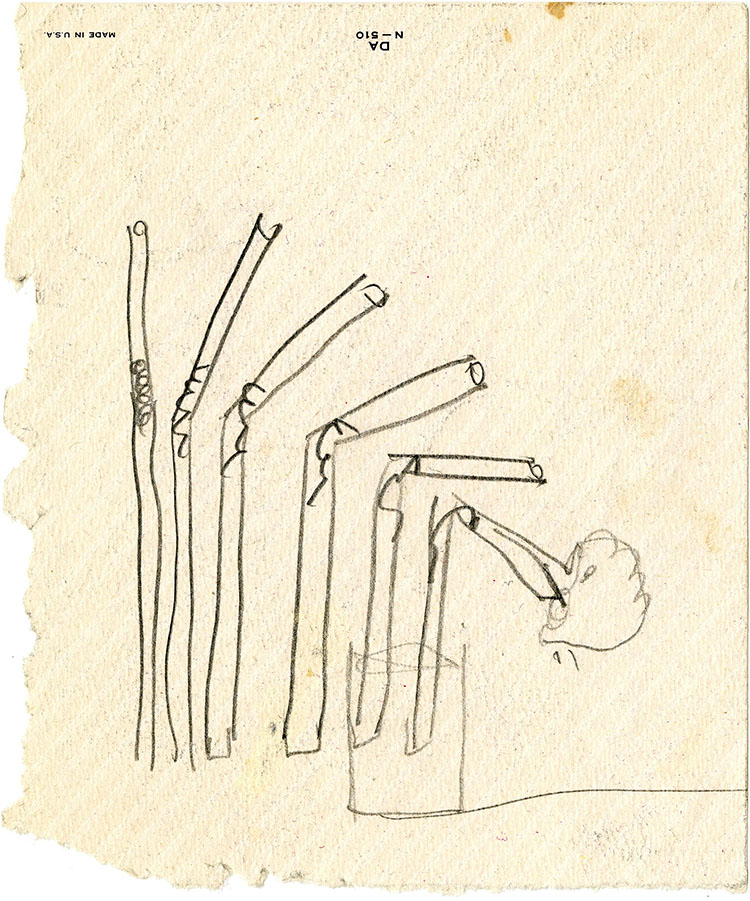 In 1939, Friedman formed the Flexible Straw Corporation, later named Flex-Straw Company, and by the late 1940s he began producing the straws with machinery he created. Because of its unique feature, the Flex-Straw was well-received by hospitals, whose patients could easily position the straw for drinking while lying down, without compromising the flow of liquids. In fact, Friedman’s first sale was made to a hospital, in 1947. The new straw virtually replaced the older glass drinking tubes that required sterilization and frequently broke.

Getting to the Bottom

Following a lead from museum specialist Peter Liebhold, Lemelson Center archivist Alison Oswald began tracking this invention story. After conversations and much correspondence with members of Friedman’s family, Oswald learned that the flexible straw was only one of a number of inventions Friedman had developed or had begun the process of developing. In December 2000, Oswald left on a fact-finding trip to Encino, Calif., to determine the extent, quality, and content of the Friedman papers. Stacked along the garage walls of the home of Friedman’s eldest daughter, Judith Rosen (the young girl in the soda shop), were boxes that held a treasure trove of documentation revealing numerous facets of Friedman’s life. After several hours of mining the materials, Oswald felt confident that the boxes contained the elements of a rich and textured narrative of an independent inventor enmeshed in all aspects of the invention process: idea and conception, creation of prototypes, manufacturing, and marketing and sales. 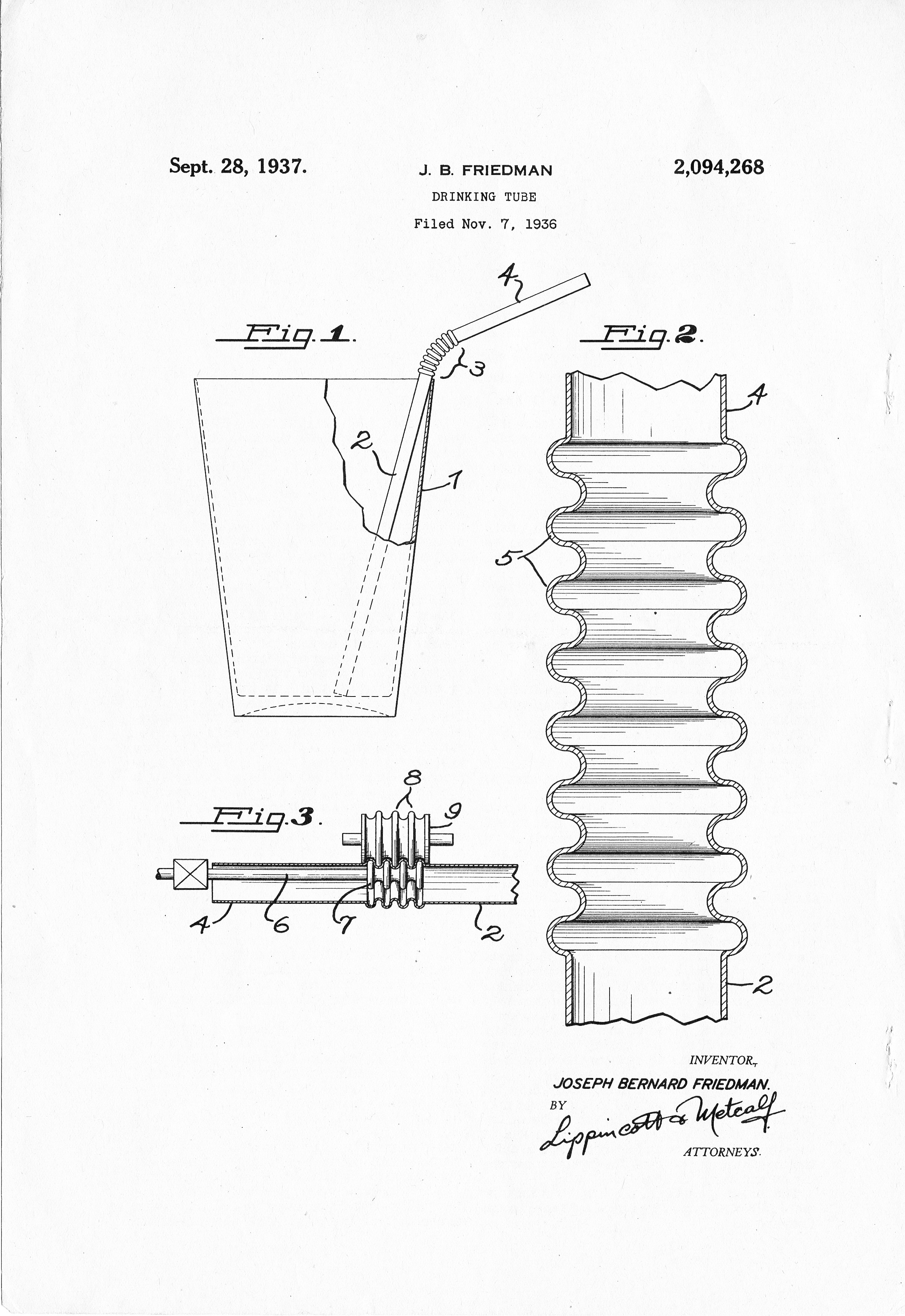 In February 2001, with the approval of the National Museum of American History’s Collections Committee, Oswald returned to California, packed 16 boxes of materials and arranged for them to be shipped to the Museum. Friedman’s children--Judith Rosen, Linda Reiss, Robert Friedman, and Pamela Leeds--donated the materials.

The Smithsonian has now processed this remarkable collection. According to Oswald, the records are unusually comprehensive. “With many inventors you get fragmented stories. This is complete: you can actually see the progression of ideas--the whole story--and that’s what makes it special.” Oswald says that although her focus was on the flexible straw, she wanted to carve out a larger story of the inventive process of an American entrepreneur.

Correspondence, photographs, newspaper clippings, Flex-Straw Company records, competitor’s patents, advertising testimonials, and drawings make up this collection. Exceptional resources include a business card with a drawing of and notes for a “nail-tire-detector,” dated March 23, 1947; Friedman’s cartoon drawings of advertising ideas for the Flex-Straw, including one with the memorable phrase, “the straw of your life”; and several doodles of the Flex-Straw created in the margins of a 1948 pinup-girl calendar.

Along with the papers, the museum acquired a number of artifacts related to Friedman, including a fountain pen, a safety razor with handle, a folding screen, a confection, and a gas range.

Judith Rosen said in an email interview that it meant a great deal to her and her siblings to have their father’s papers and artifacts preserved by the Smithsonian. “It is comforting, also, to know that his voluminous papers are now in a catalogued form and can be of use to future researchers. I believe it would have been a great loss if they had languished and deteriorated in my garage. I would hope that researchers would be able to explore the characteristics of the inventive mind.”

The Legacy Lives On

Judith Rosen remembers her father telling her she would see the Flex-Straw “all over the world,” and he was right. Flex-Straws are distributed internationally, and Rosen collects boxes of them on her travels.

What Friedman may not have ventured to prophesy was the varied uses his invention would inspire. Pamela Friedman Leeds, his youngest daughter, has been incorporating the Flex-Straw in her artwork for some time. She refers to the invention as “the family icon.” Leeds also collects Flex-Straw related pieces, including a six-foot tall sculpture made from cast straws, a bronze Styrofoam cup with matching Flex-Straw, and a bronze Christmas tree with a Flex-Straw serving as its trunk.

The straw may be one of those objects that we consider mundane, perhaps only recognizing its importance by its absence--for example, when the person at the drive-through fails to include one with our drink. But the mind behind the flexible straw was anything but mundane.