Graphic designer Susan Kare is the “woman who gave the Macintosh a smile.”1  She is best known for designing the distinctive icons, typefaces, and other graphic elements that gave the Apple Macintosh its characteristic—and widely emulated—look and feel. Since then, Kare has spent the last three decades designing user interface elements for many leading software and Internet firms. If you have clicked on an icon to save a file, switched the fonts in a document from Geneva to Monaco, or tapped your smart phone screen to launch a mobile app, then you have benefited from her designs. Kare’s work for Apple is featured prominently in the Silicon Valley section of the Lemelson Center’s exhibition, Places of Invention.

Visitors learn about Susan Kare and design their own icons in the Silicon Valley section of the Places of Invention exhibition. Photo by Brad Feinknopf.

On Tuesday May 8, the Lemelson Center will host Kare as part of the Lemelson Center’s Innovative Lives speaker series. After a short presentation by Kare, she and I will talk about her fascinating career, followed by Q&A with the audience. After the program, guests will have the opportunity to examine some relevant objects from the museum’s collections and enjoy a light reception. Admission is free, but please visit our Events page to reserve your ticket and learn about the Lemelson Center’s other upcoming programs. As a preview, here are some details about Kare’s work on the Apple Macintosh.

In 1982, Kare was living in the Bay Area and working as a sculptor. She was working on a commission—“welding a life-size razorback hog” for an Arkansas museum—when she received a phone call from Andy Hertzfeld, an old high school classmate from the Philadelphia suburbs. Hertzfeld worked at Apple Computer in Cupertino; he had been recruited by co-founder Steve Jobs to serve as the lead software architect for Apple’s latest product, the Macintosh personal computer. Hertzfeld needed some images and typefaces for the new Macintosh and asked if Kare would be interested in interviewing for a graphic design job.2 There was only one problem: Kare had never worked in computer graphics and she admittedly “didn't know the first thing about designing a typeface.” Undaunted, Kare went to the Palo Alto public library and checked out a number of books on typography. "I even brought them to my interview to prove I knew something about type, if anyone asked!" she remembered. "I went into it totally green." Kare aced the interview and in January 1983 she started a job at Apple designing fonts and icons for the Macintosh; her business card read “Macintosh Artist.”3

When Kare joined Apple in January 1983, Hertzfeld tasked her with designing the icons and typefaces for the Mac’s operating system and applications such as MacPaint. The Macintosh featured a bit-mapped display in which each point of light, or pixel, on the screen was individually controlled by a single bit of data. Creating graphics was simply a matter of deciding which bits to turn on and off. Though Kare had little experience in computing she drew inspiration from her deep knowledge of art history. “Bitmap graphics are like mosaics and needlepoint and other pseudo-digital art forms, all of which I had practiced before going to Apple,” recalled Kare. “I didn't have any computer experience, but I had experience in graphic design.”4

An original sketch for a “Danger” icon from Susan Kare’s sketchbook, about 1983. Courtesy of Susan Kare and kareprints.com

Hertzfeld told Kare “to go to the stationery store and get the smallest graph paper I could find and color in the squares to make images."5 As instructed, Kare went to the University Art supply store in Palo Alto, picked up a $2.50 sketchbook, and began experimenting with forms and ideas. In this sketchbook, which was recently acquired by New York’s Museum of Modern Art, we can discern Kare’s design process. Kare began with an idea, metaphor, or command instruction she was trying to represent pictorially; for example, her individual sketchbook pages have titles like “boot,” “jump,” “debug,” “auto indent,” and “danger.”  Kare used a ruler to block out a 32 x 32 square of graph paper; then, using a pencil or colored pens, she filled in (or left blank) those 1024 miniature squares to create images. Eventually Hertzfeld coded an icon editor for the prototype Mac. Using a mouse, Kare toggled the bits on and off, and the application generated the hexadecimal code underlying the grid.6 With these simple drafting tools, Kare began to “master a peculiar sort of minimal pointillism” as she turned “tiny dots on and off to craft instantly understandable visual metaphors for computer commands.”7

Kare tweaked and streamlined certain icons that Apple had already used for its Lisa personal computer, such as the arrow cursor, the trash can, and the “document” icon with the turned-up page corner. She also created dozens of new icons for Hertzfeld and the software group. Kare’s icon designs were intuitive, but they also had a playful, whimsical quality; think of the smiling “Happy Mac” that greeted users at startup or the ticking bomb that represented a system error. These friendly designs helped new users overcome what Rolling Stone’s Steven Levy called the "FUD principle: the Fear, Uncertainty and Doubt” that had prevented many potential users from purchasing a personal computer.8 Instead, Kare’s work gave the Mac a “visual lexicon that was universally inviting and intuitive” and “set the standard for how computers could appeal to a broad group of nontechnical people.”9

Kare also created a family of new proportional fonts for the Macintosh. At the time, most digital typefaces were monospaced, meaning that narrow and broad characters alike (e.g., both "I" and "M") used the same amount of on-screen space. Typeface design imposed even more rigorous constraints than the icons. "Each letter had to fit in a space of just 9 x 7 dots, so they looked jaggedy," Kare remembered. She began with the bold operating system font, originally called Elefont, and decided that “it might look cleaner if the lines were only ever horizontal, vertical, or at 45 degree angles." That system typeface, later renamed Chicago, provided the textual look for two of Apple's biggest products—the Macintosh and the iPod—for over 20 years.10

Kare would produce several other font sets for the Macintosh. In a nod to their old neighborhood, she and Hertzfeld named them after the commuter train stops on Philadelphia’s Main Line—Overbrook, Merion, Ardmore, Rosemont, and Paoli. Jobs liked the naming convention, but suggested that the fonts be renamed for “world class cities,” such as New York, Geneva, London, Toronto, and Venice. Kare also experimented with more avant garde fonts, such as Ransom (later San Francisco), whose characters looked like the newspaper cutouts from a kidnapper’s note, and Cairo, which appropriately looked like a set of modern hieroglyphics. Like proto-emojis, the Cairo font set was composed of several miniature images—including a palm tree, a crescent moon, and a skateboard—and allowed users to easily embed miniature images within their text.11

The Mac development team also put Kare to work demonstrating the capabilities of the new MacPaint application. She produced several exquisite MacPaint drawings for the Macintosh’s glossy user manuals and promotional advertisements, including a Japanese woman combing her hair, a pair of tennis shoes, and gourmet baby food. Kare also contributed substantially to the Mac’s rollout campaign; she posed for magazine photo shoots, appeared in television commercials, and demonstrated the Mac on TV talk shows.12

Incredibly, Kare’s seminal user interface work had occurred during just one intense year. She had joined Apple in January 1983, and the Macintosh was released with great fanfare in January 1984, accompanied by a 60-second Super Bowl television ad inspired by George Orwell’s dystopian novel, 1984. After Apple, Kare served as creative director at NeXT, Inc., before founding her own digital design firm, Susan Kare LLP, in 1989. Over the next three decades, Kare would design user interface elements for many of the leading software and Internet firms, from Microsoft to Oracle to Facebook. In July 2015, Pinterest announced that Kare would be joining the social bookmarking site as the product design lead. After years of running her own business, the new corporate gig is Kare’s first full-time, salaried job in thirty years.13

Kare has earned a multitude of professional accolades for her life’s work, but she does not let these honorifics go to her head: “I still spend my days turning dots on and off,” she says with characteristic humility.14 But Kare’s influence is significant. She brought “an artist’s sensibility to a world that had been the exclusive domain of engineers and programmers,” and in the process, she says, “I hoped to help counter the stereotypical image of computers as cold and intimidating.”15 With thirty years (and counting) of simple, elegant, and whimsical designs, Kare has made personal computing more appealing for millions of new users.

A MacPaint screenshot featuring Kare’s artistry, 1983. Notice the icon menu at left and the Chicago system font used for the pull-down menus. Courtesy of Susan Kare and kareprints.com

5 Zuckerman, “The Designer Who Made the Mac Smile.”

10 Brownlee, “What Every Young Designer Should Know.” 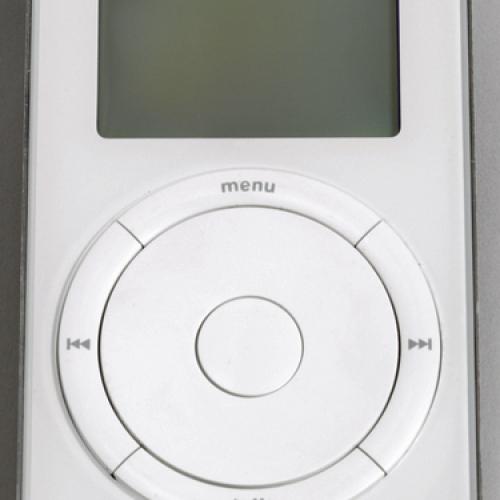 Steve Jobs may not have been Italian, but he clearly had a strong affinity for Italy. 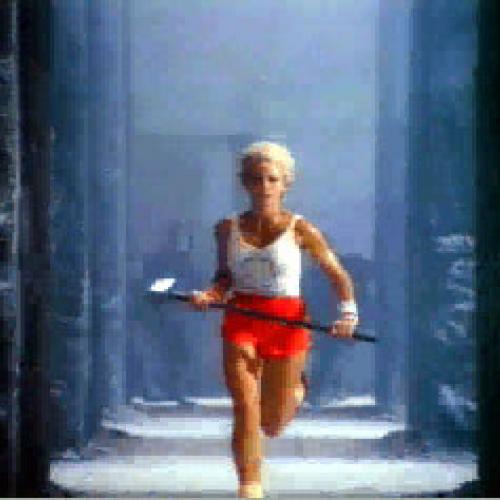 Today marks the 30th anniversary of Apple’s famous “1984” television ad that aired on January 22, 1984 during the third quarter of the Super Bowl XVIII between the Los Angeles Raiders and Washington Redskins. Historian Eric Hintz describes how the “1984” ad and the introduction of the Apple Macintosh were key milestones both in the history of computing and the history of advertising.