Teaching Science with a Wizard’s Touch

In July the Lemelson Center’s Draper Spark!Lab at the National Museum of American History will be opening. Spark!Lab will provide children and families opportunities to explore their inventive creativity—to create, innovate, collaborate, and problem-solve. These experiences empower children to develop the skills and confidence they need to succeed today and in the future. Spark!Lab activities are organized around the invention process and several “It Phrases,” which include:

The Mr. Wizard Papers, a collection in the Museum’s Archives Center, documents an important example of introducing children to science and engaging them in the “It Phrases” that are at the heart of Spark!Lab’s educational approach. 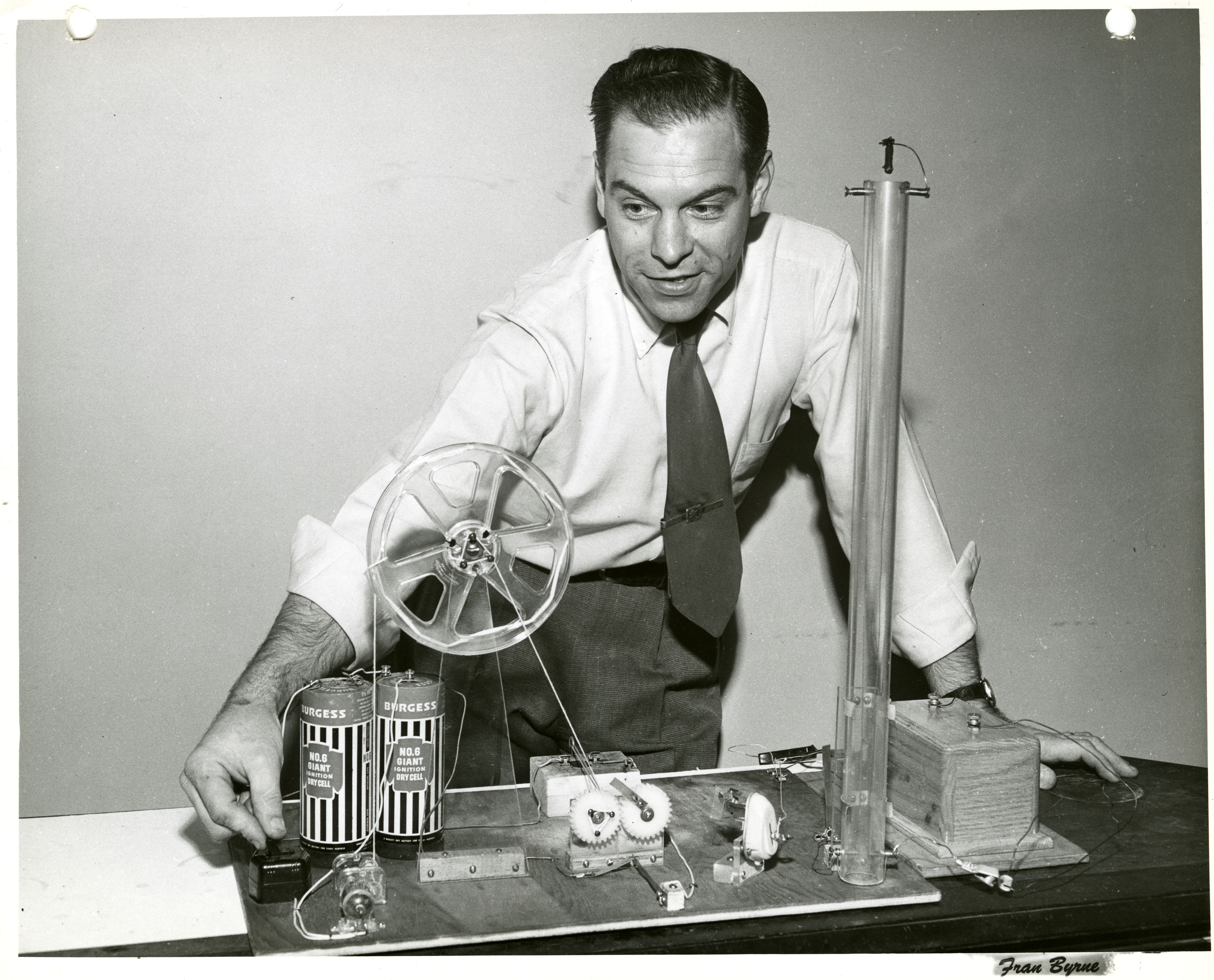 In the early 1950s, Don Herbert (1917-2007) created Watch Mr. Wizard (1951–1965), an educational children’s television program devoted to science and technology. Herbert hosted the program using the persona “Mr. Wizard” to provide opportunities to explore creativity and problem-solve. On Watch Mr. Wizard, a weekly show that aired live, Herbert explained scientific principles like gravity, magnetism, and oxidation through simple experiments that could be re-created by his young viewers in the classroom or at home. Each episode was shaped around a single theme and used an “inquiry-based” approach to pose a problem and solve it.

Herbert prepared for each episode by identifying a problem (Think it). He conducted in-depth research (Explore It), which is evident in his episode files. He created drawings and diagrams (Sketch It) of how each episode worked. He built (Create It) equipment and prototypes necessary for his experiments. He tested (Try It) his experiments before shooting on live television. He learned (Tweak It) from testing with his young assistants and made adjustments. And, eventually, he marketed (Sell It) Mr. Wizard books and science kits.

Herbert said, “I have never regretted this decision to become a home workshop scientist with TV peering over my shoulder.” In the early 1950s television was new and exciting. At the time, the national television audience in the United States exceeded 40 million viewers and offered an irresistible market for entertainment. (LaFollette, 2013). Herbert’s program was one of the first attempts to bring science to the American public through the medium of television. Herbert said in a 1961 interview, “I do a kind of educational television but the difference between what I do and educational television is like night and day. The primary purpose of educational television is to teach and the primary purpose of ‘Mr. Wizard’ is to entertain, to stimulate, and to intrigue.” Mr. Wizard made viewers more comfortable with science by selecting simple topics, posing an interesting question, and devising an ingenious solution.

Watch Mr. Wizard premiered on March 3, 1951 on the WNBQ station in Chicago and ran until June 27, 1965, becoming the oldest continuous children’s science program on the NBC network. At its peak, Watch Mr. Wizard drew approximately 800,000 viewers per episode. The show was cancelled in 1965, but Herbert returned to television in Mr. Wizard’s World, a faster-paced version of Watch Mr. Wizard that ran on the Nickelodeon network from 1983 to 1990. Television was a key element in the National Science Foundation's (NSF) early initiatives to promote a public understanding of science. The NSF funded several television programs developed by Don Herbert that included Experiment (1965-1966), Mr. Wizard Close-Up (1975) and How About…With Mr. Wizard (1980).

For decades Mr. Wizard encouraged innovative thinking and “sparked” viewers imagination and creativity. He unknowingly spurred many viewers to become scientists and, perhaps more importantly, to appreciate the science and technology that surrounds us in our daily lives. If he were alive today he would feel right at home in Spark!Lab, posing problems, devising solutions, building prototypes, and encouraging others.