The need for a skilled and educated work force is a frequent topic in current discussions about revitalizing the economy. This is not a new concern. In fact, at the turn of the 20th century, the United Shoe Machinery Corporation of Beverly, MA, was actively engaged in its own effort to promote skills, knowledge, and expertise for young men (ages 14-18) by teaching “skills for living in the world, problem-solving, learning, and collaborating.” In May 1909, the company initiated, with the City of Beverly and the State of Massachusetts Commission on Industrial Education, a chartered industrial school, where generations of future shoe workers and managers were trained. Known as the Beverly Independent Industrial School, or Beverly School, it was a model in industrial education for mechanics in the United States. The school officially opened on August 2, 1909, and according to The Three Partners, 1911, “one of the most important features of the welfare work at the [United Shoe Machinery] factory is the industrial school for the boys who will one day be inventors and the trained mechanics of the Company.” The school intended to teach skills in the shoe trade under actual shop conditions. 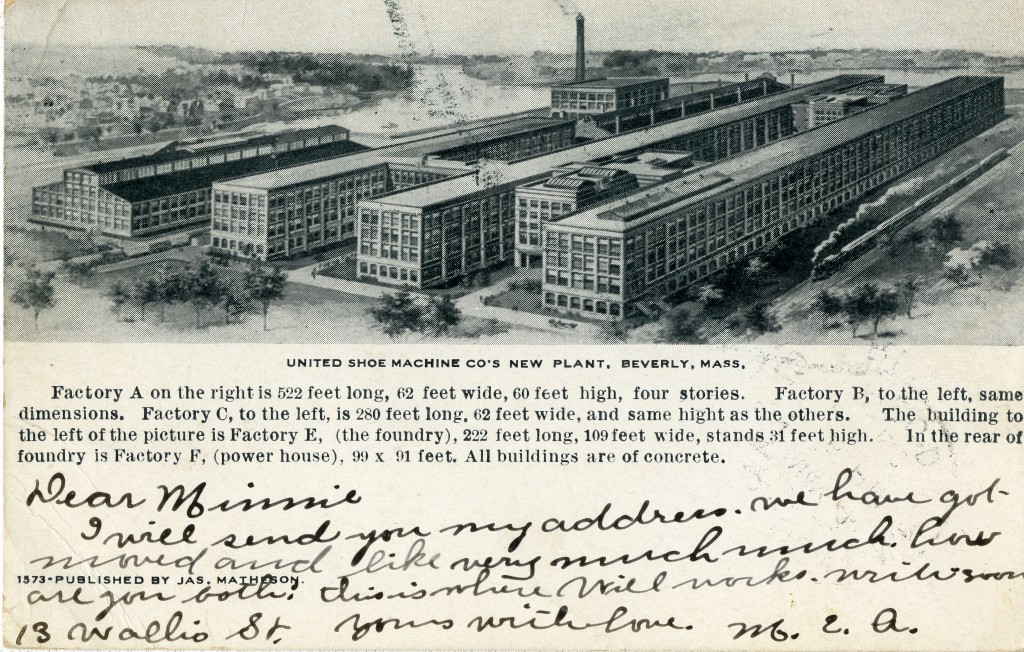 In 1905, Governor William L. Douglass of Massachusetts appointed a commission to “investigate the needs for education in the different grades of skill and responsibility in the various industries of the Commonwealth.” The commission learned that though there was wide-spread interest in special training, there was a lack of skilled workman in the industries, and public schools were not meeting the needs of industry. The commission recommended that local high schools in Massachusetts modify their instruction to align with the needs of  local industries. Towns throughout the Commonwealth of Massachusetts were urged to provide industrial courses in high schools and evening schools. In 1906, an act by the State of Massachusetts authorized the establishment of independent industrial schools, providing partial state funding and which were administered through a commission independent of the State Board of Education.

Around 1907, the three great shoe centers of Massachusetts—Beverly, Brockton, and Lynn—began discussing the feasibility of establishing a shoe trade school to teach the development of shoe making and shoe machinery. In order to explore this question of training, the Beverly Commission on Industrial Education was formed.

On May 18, 1909, Alderman James A. Torrey of Beverly introduced the following order to the Board of Aldermen which passed and was signed on June 26, 1909.

Two groups, A and B, each consisting of 35 young men, alternated between the United Shoe Machinery factory and Beverly Industrial School, spending one week at the factory and then one week at the high school. Instruction included mathematics, chemistry, electricity, mechanics, mechanical drawings, blueprint reading, English, civics, and industrial economics. The machinist-instructors taught both in the factory and the classroom, while subject specialists taught the other subjects. Beverly Superintendent Adelbert L. Safford said, “Today we need men who can do things, men who can create not only with the brain—and it takes brains to be a good mechanic or a good farmer in this age—but with skilled hands as well.” 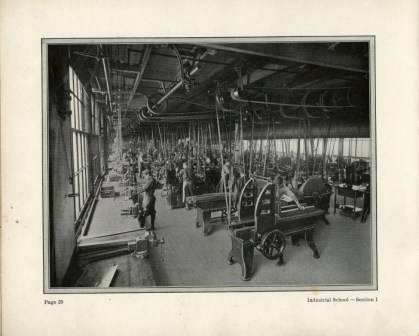 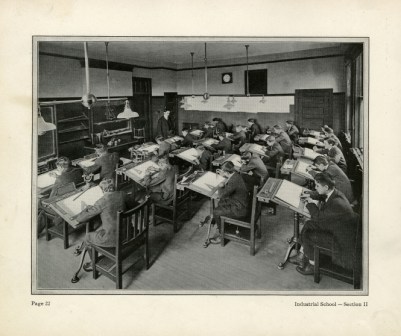 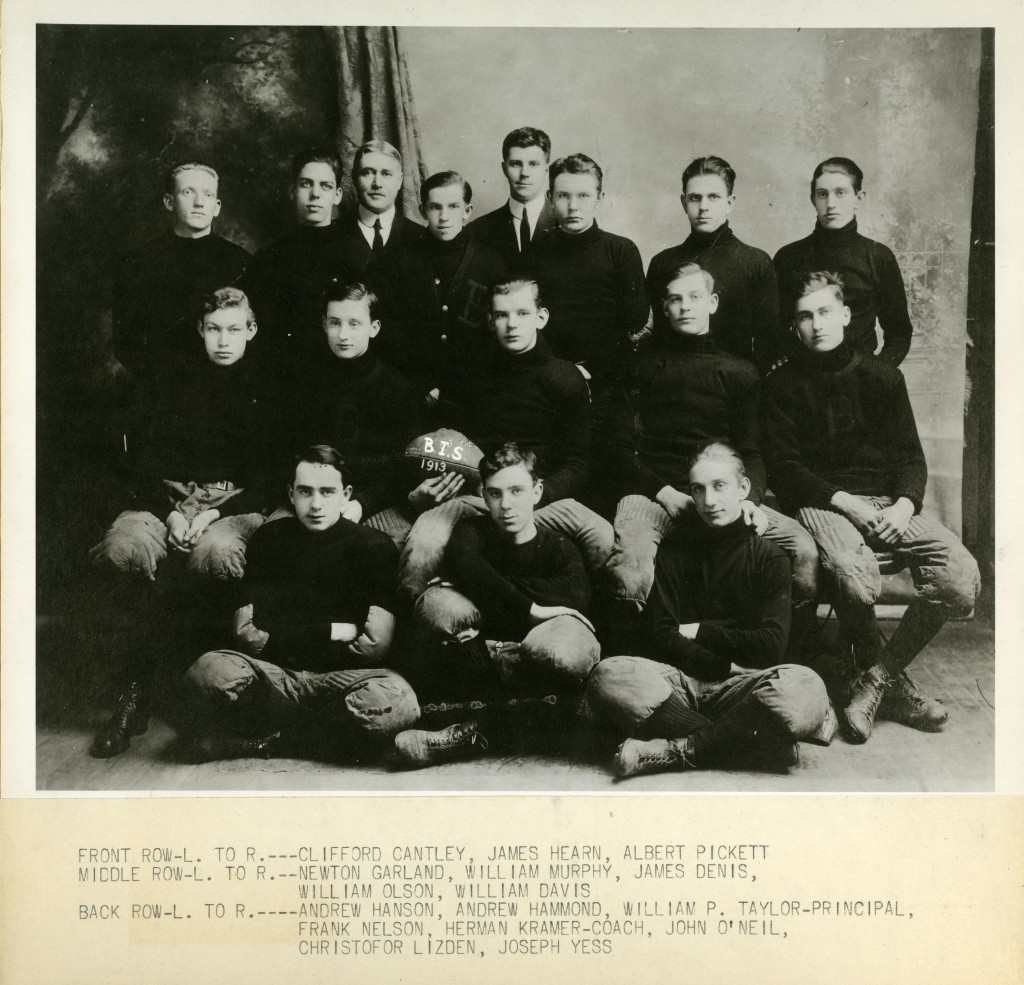 In addition to teaching skills in the industrial school, United Shoe also established a program to teach its immigrant workforce English. Using the English for American Citizenship Program (Industrial Series, 1919) the program not only taught the workforce to speak English, it taught life lessons in “punching the clock,” “buying clothes,” “spending money,” “asking for directions,” and “buying groceries.” Prepared by the Massachusetts Department of Education, University Extension, the Industrial Series Program was free to all residents of the State of Massachusetts. The courses were wide ranging, and included language, economics, mathematics, government, civil service, drawings, electricity, natural science, and homemaking. Courses were also taught for teachers and were held at Boston area schools such as Simmons College, Boston University, and Franklin Union. 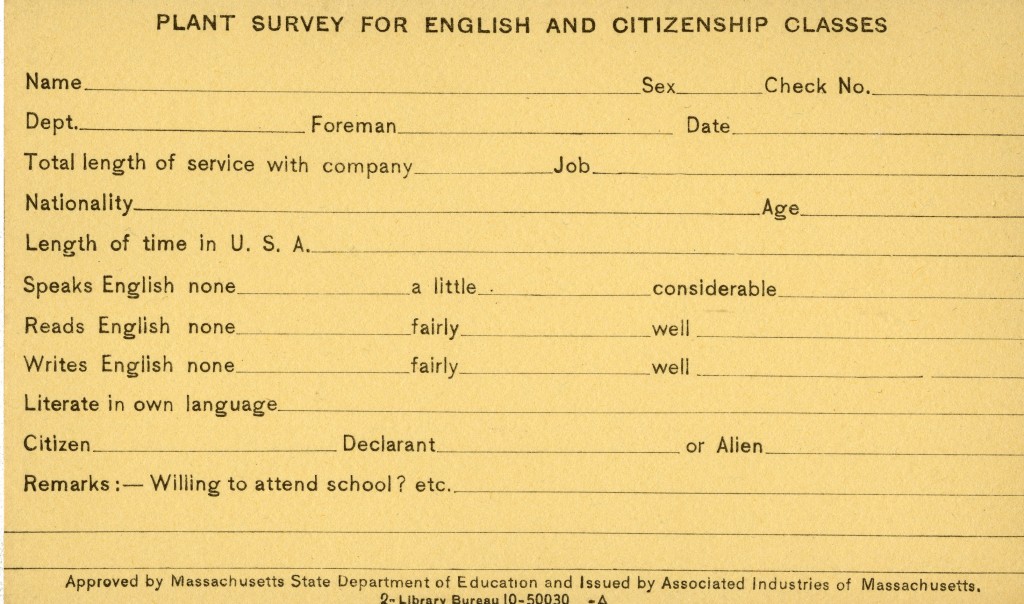 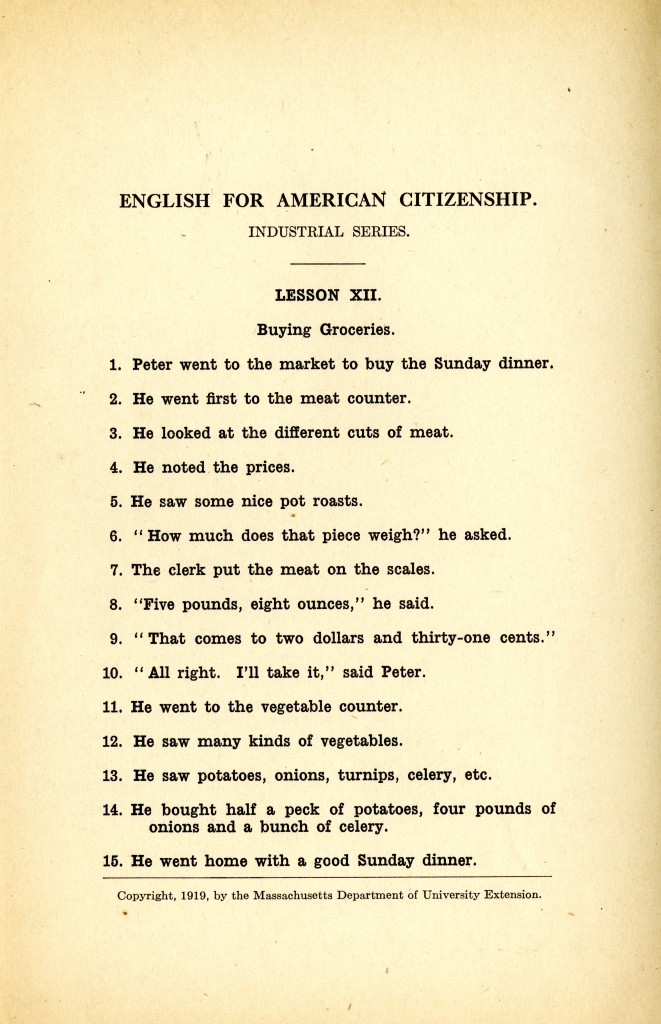 Helping its immigrant workforce is just one example of United Shoe fostering skills for living in the world. United Shoe also sought to weave into its English lessons and hands-on training with machinery, “civic literacy” with lessons about Washington’s Birthday, the flag, and the Constitution. This page from an employee’s copybook shows a lesson an employee practiced writing titled, “The Declaration of  Independence.”  Most of the texts used by United Shoe promoted middle class values and habits along with instruction in the language. 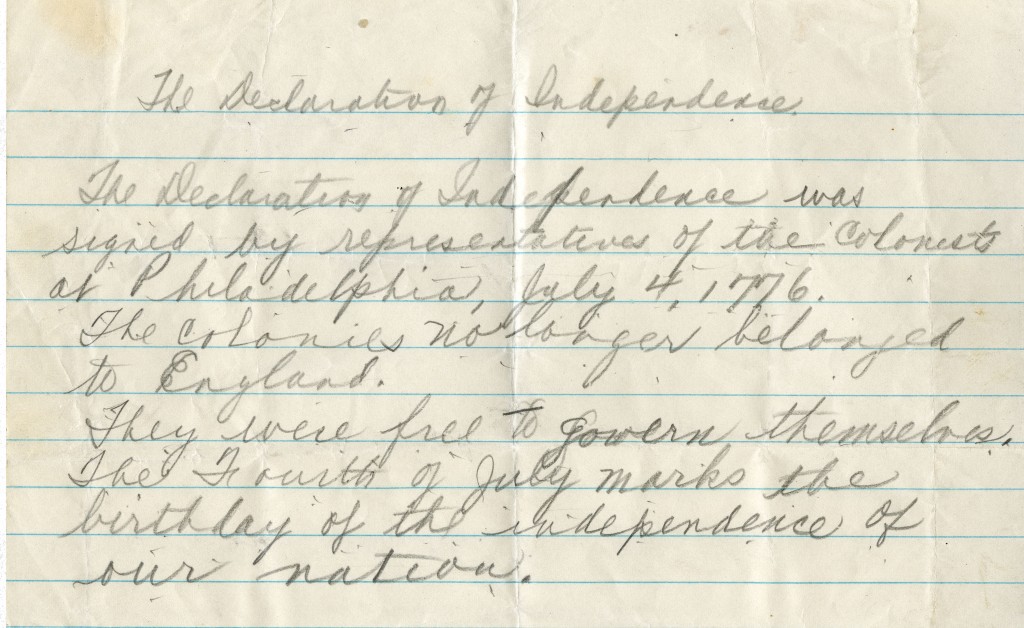 To learn more about the United Shoe Machinery Corporation and its rich history of shoe making and educating its workforce, visit the Archives Center.